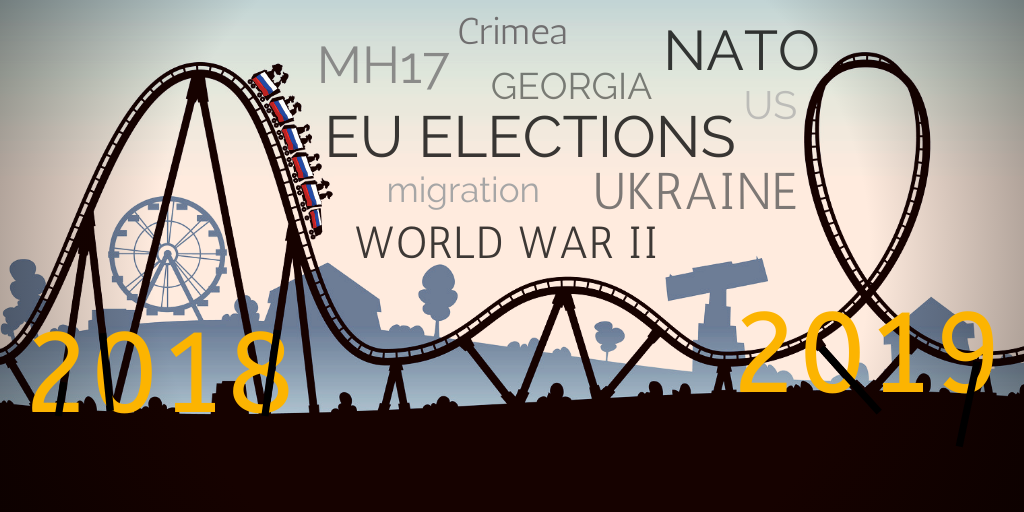 High hills, steep falls, sharp turns – entering the world of pro-Kremlin disinformation sometimes makes one feel like everything is on its head, definitely not where it’s supposed to be. Let’s embark on a journey through 2019, where we experience all the typical symptoms of a roller coaster ride, from pure amusement to a sense of insecurity. Hop on!

Did you know that many Americans wanted Santa Claus to become female or gender-neutral? No? Good for you, because it wasn’t true. One of the first disinformation cases we recorded this year was about a survey where allegedly 27% of Americans expected a gender transformation from Santa Claus. What the disinforming outlets forgot to mention, however, was that this number came out of a statistically insignificant online survey conducted for entertainment purposes.

It was a rather classical case of manipulating figures and blowing things out of proportion. We came across this tactics many times this year, including on time-tested issues. But it’s not a sleigh ride; we’re on the roller coaster now. Keep your seat belt fastened, we’re speeding up!

One of the big disinformation waves where this method was applied was the issue of migration, especially in connection to the UN Global Migration Compact. Some countries, such as Georgia, were threatened by the “Evil West” to accept waves of migrants. Others, like Germany, were portrayed as the migrants ”habitat” of public disorder, robberies and rapes. As the heated discussion over the UN document slowed down later in the year, pro-Kremlin outlets came back to their usual guns, mixing disinformation narratives about funds on support for children being redirected to migrants  instead of children with scares about ”no-go zones” in European countries, and many more. But the award for the most absurd case in this matter would have to go to the claim that Swedish authorities will invest in a website teaching migrants how to have sex with Swedish women – while in reality it provides information about sex, family planning, and health. If you’re starting to feel nauseous, it’s understandable at this point of our journey.

As we wrote in January 2019, Ukraine was constantly in the crosshairs of Kremlin disinformation last year and it seems that the country will remain there this year as well. Apparently, we were right – Ukraine remained the most frequent target of the pro-Kremlin disinformation campaigns. There were hardly any surprises when it came to narratives used. Attempts at white-washing Russia’s troops and armaments involvement in the eastern Ukraine, portraying the illegal annexation of Crimea as a democratic referendum, blaming the West for instigating the Euromaidan protests, and aggressively pushing the narrative about fascists running basically everything in Ukraine were all there this year – and we debunked them yet again.

Likewise, not much has changed in the disinformation campaign centred on the shooting down of Flight MH17, which took place in June 2014. Five years of lies later, pro-Kremlin outlets still repeat the same messages about lack of proof of Russia’s involvement and try to pin the blame on Ukraine, in spite of the robust body of evidence from the international investigation.

Even a roller coaster needs to change to a slower pace sometimes, before it gets to another hill. And as 2018 saw pro-Kremlin outlets struggling up the slope of disinformation targeting Sergei Skripal a, his and his daughter Yulia’s poisoning and the investigation, which clearly proved Russia’s responsibility, they seemed to have reached the peak of their manipulation abilities, as we counted over 150 false narratives about the case of Sergei Skripal a year after the poisoning. And then down the slope they went, repeatedly accusing the UK and Western countries, who voiced their support for the results of the British investigation, of Russophobia. That’s the most common accusation used by pro-Kremlin actors when confronted with evidence, be it the Skripal case, the foreign and military policy of different countries, the activities of the EU and NATO, and more.

The Russophobia ”argument” was put to use this year in the context of important historical anniversaries. Hold tight, as we’re taking a sharp turn into 1939, where, according to pro-Kremlin outlets, the Molotov-Ribbentrop pact and its secret protocol was just about non-aggression and not about dividing Europe into Nazi German and Soviet Russian spheres of influence; where Baltic States joined (sic!) the USSR in accordance with international law (and Lithuania even benefitted from the pact!); and while Poland started World War II. Roller coaster rides can sometimes get as scary as these deceitful narratives – but luckily, we debunked all of them, so click on the links provided above and we can move on with our ride.

Watch out now, your sense of balance may get heavily disrupted as we enter the land of the puppets: countries (Ukraine, Poland, Germany, and others) or the media or think-tanks or activists controlled by the US or NATO, or  the West or its powerful lobby groups.

The very interesting case in point is the EU, which has been a constant target of Russian disinformation. This year, emphasis was put on the elections to the European Parliament. Pro-Kremlin outlets managed to portray the EU both as the tormentor and the victim. On the one hand, narratives about the EU’s Nazi roots and the EU colonising and/or corrupting its member states were thrown into the information space. The message was clear: the EU is evil and its citizens should steer clear from having anything to do with it. On the other hand, the same EU was portrayed as weak and without any power or influence whatsoever, and the elections – as a scam. Contradictory as they are, all these narratives had the same purpose: to discourage Europeans from voting. Luckily for European democracy, however, these attempts proved wildly unsuccessful.

Not leaving the puppet land yet, the roller coaster takes us next to other narratives used under this thematic umbrella. The climate crisis made it to the headlines this year too, with stories both well-known – such as the ones questioning the human factor behind it or even its very existence! – and new ones, mostly focused on Greta Thunberg. The climate activist was subject of a crass disinformation campaign, trying to show her as the victim of the ”green faith” on the one hand and as a threat to the world on the other.

The disinformation roller coaster does the merry-go-round, spinning and turning, sometimes using the same narratives for years. It is a long game to try to distort the public debate, use basic emotions and manipulate our minds. Nevertheless, nauseous or not, the EUvsDisinfo team is always ready to ride the roller coaster with you and help you keep your sharp focus.

By the way, the first inventions that paved the way for modern roller coasters had the form of hills of ice and are believed to originate from Russia. Coincidence? Definitely. But a funny one.

Have a peaceful and disinformation-free Christmas!