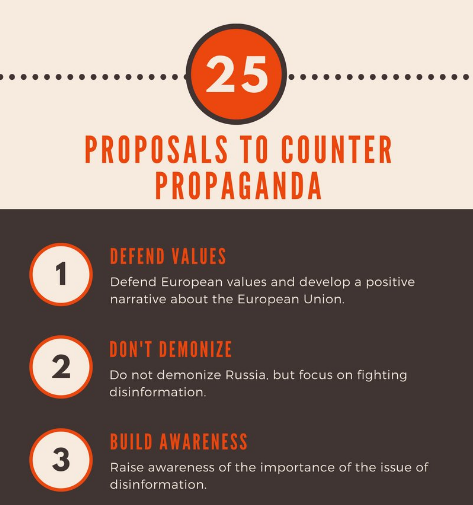 Last week, the Director of the French Institut de recherche strategique de l’Ecole militaire (IRSEM), which is part of the French Defence Ministry, took to a subject little researched: how to combat pro-Kremlin propaganda without falling into the trap of doing counter-propaganda? Counter-propaganda would be an ill-suited means for Western democracies to fend off the effects of disinformation activities, argues Jean-Baptiste Jeangène Vilmer. It would also require more means than “any European government is ready to bring up”.

1 – Clearly distinguish between disinformation, propaganda and public diplomacy to avoid the argument that “everything is propaganda”. While every country can defend their points of view, the author argues, the “intentional falsification of information” must be condemned.
2 – Do not demonize Russia, but focus on fighting disinformation.
3 – Raise awareness of the importance of the issue.
4 – Recognise there can be information activities that straddle the preconceived divisions between information warfare and military action, including cyber-attacks, political communication, election interference and disinformation.
5 – Strengthen the research on this issue from all sides, including ministries, universities, think-tanks and the press.
6 – Recognise the limits of a purely state-driven response to disinformation. It will always be suspected of being biased. Civil society must also be involved.
7 – Acknowledge the limits of debunking. Establishing the facts is necessary, but it itself not sufficient. This is particularly true given that the aim of pro-Kremlin disinformation has been described as “undermining the notion of objective truth and the very possibility of doing journalism”.
8 – Develop programmes to educate citizens in media literacy.
9 – Promote a widely shared convention of journalism ethics.
10 – Adapt the response to the audience. Respond with infotainment-style content for those who can only “consume entertaining information”.
11- Encourage independent Russian media.
12 – Translate the articles written by independent Russian voices. This could contribute to showing that RT and Sputnik are not the only Russian points of view.
13 – Build up networks with independent Russian journalists.
14 – Use the testimony of whistleblowers who have left the propaganda machine. They can reveal the methods used.
15 – Make use of the latest technology to research how fact-checking and identification of online trolls can be automatized.
16 – Reinforce the EU’s East StratCom Task Force with funds and staff and distribute its products more widely.
17 – Encourage EU Member States to develop national mechanisms to combat disinformation. While some have already starts this endeavour, having a national centre against disinformation facilitates the quick response to disinformation stories.
18 – Reinforce the cooperation between states, the European Union and NATO in this field. Avoid overlap and duplication of efforts.
19 – When debunking disinformation, also expose the propaganda methods used. Familiarise users with those methods so they can detect them elsewhere.
20 – Track the financing of “anti-European propaganda”.
21 – Create an international NGO dedicated to the fight against disinformation, like Reporters without Borders or Transparency International. It could rank media according to the trustworthiness of their reporting.
22 – Consider, if needed, more restrictive counter measures, including fines, sanctions and blocking in certain cases.
23 – Combat also the effects of disinformation by strengthening EU and NATO solidarity, social cohesion, democracy and respect of human rights.
24 – Communicate more in Russian, especially on social media.
25 – Defend European values and develop a positive narrative about the European Union.

Read the full study (in French)