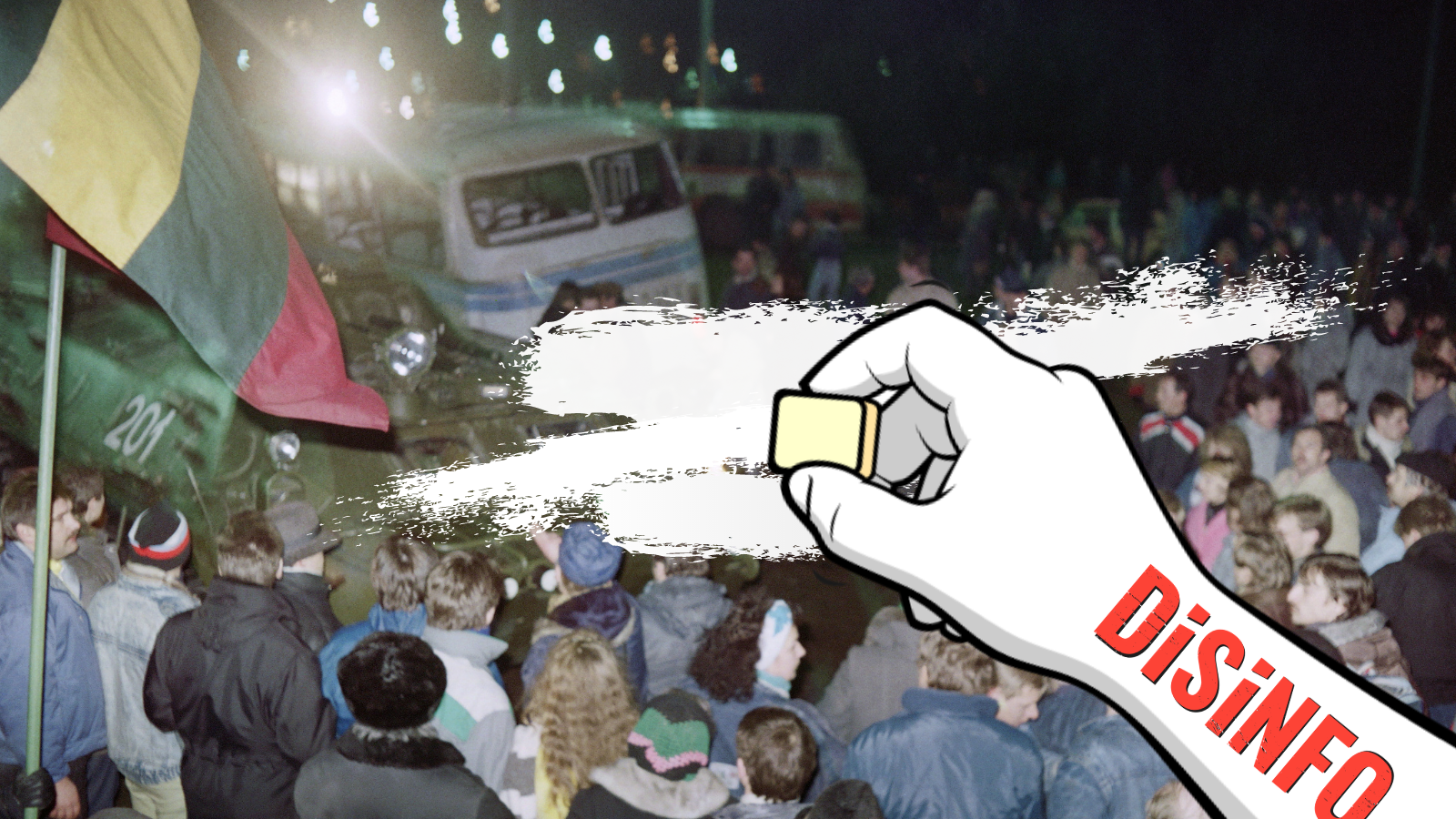 Historical revisionism gets a modern spin as the pro-Kremlin media label the events of January 13, 1991 in Vilnius a “colour revolution”.

The headline, followed by an “interview” with a former propaganda specialist in the Soviet army, indeed ticked all the propaganda boxes:

Thirty years ago, on January 13, 1991, thousands of Lithuanians gathered at the TV tower, the Radio and Television headquarters and the Parliament building in the capital, Vilnius, to take a stand against Soviet troops deployed to crush Lithuanian independence. The Freedom Defenders Day, as it is known now, was one of the key moments leading up to the dissolution of the Soviet Union. Three decades later, it is a major target of pro-Kremlin disinformation.

This year, pro-Kremlin outlets alleged that “American fascists” and “local collaborators” used the events of January 13, 1991 to destroy the USSR. Such claims seek to revise not only Lithuanian but also Russian history, ignoring the fact that thousands of Muscovites took to the streets in January 1991 to support Lithuanian independence. 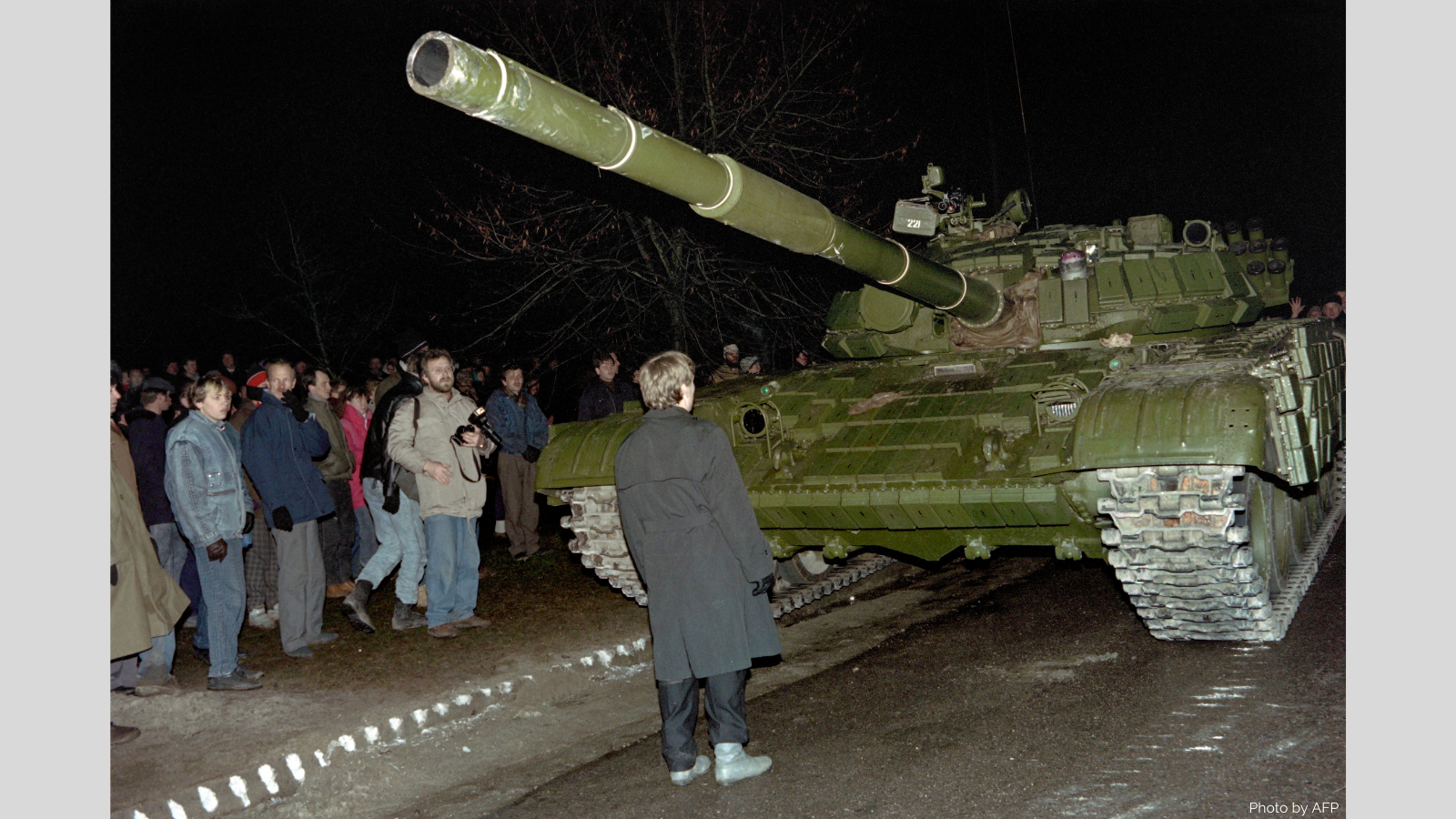 A peaceful protester standing in front of a Soviet tank in Vilnius, January 1991

According to pro-Kremlin media, the independence of the Baltic States is a historical nuisance or an American “plot” at best. This week we saw claims that the Baltic States receive instructions on how to react to key international events from the US state department via fax, that the US is pushing Lithuania to buy American gas and that Lithuania, guilty of strained relations with Russia, is not even an independent state!

One may be surprised, then, that Lithuania, along with Poland and Ukraine – which according to the pro-Kremlin media lack any kind of meaningful political agency – were accused of continuing their alleged active interference in Belarus. In the world of pro-Kremlin disinformation, logic and consistency are optional. 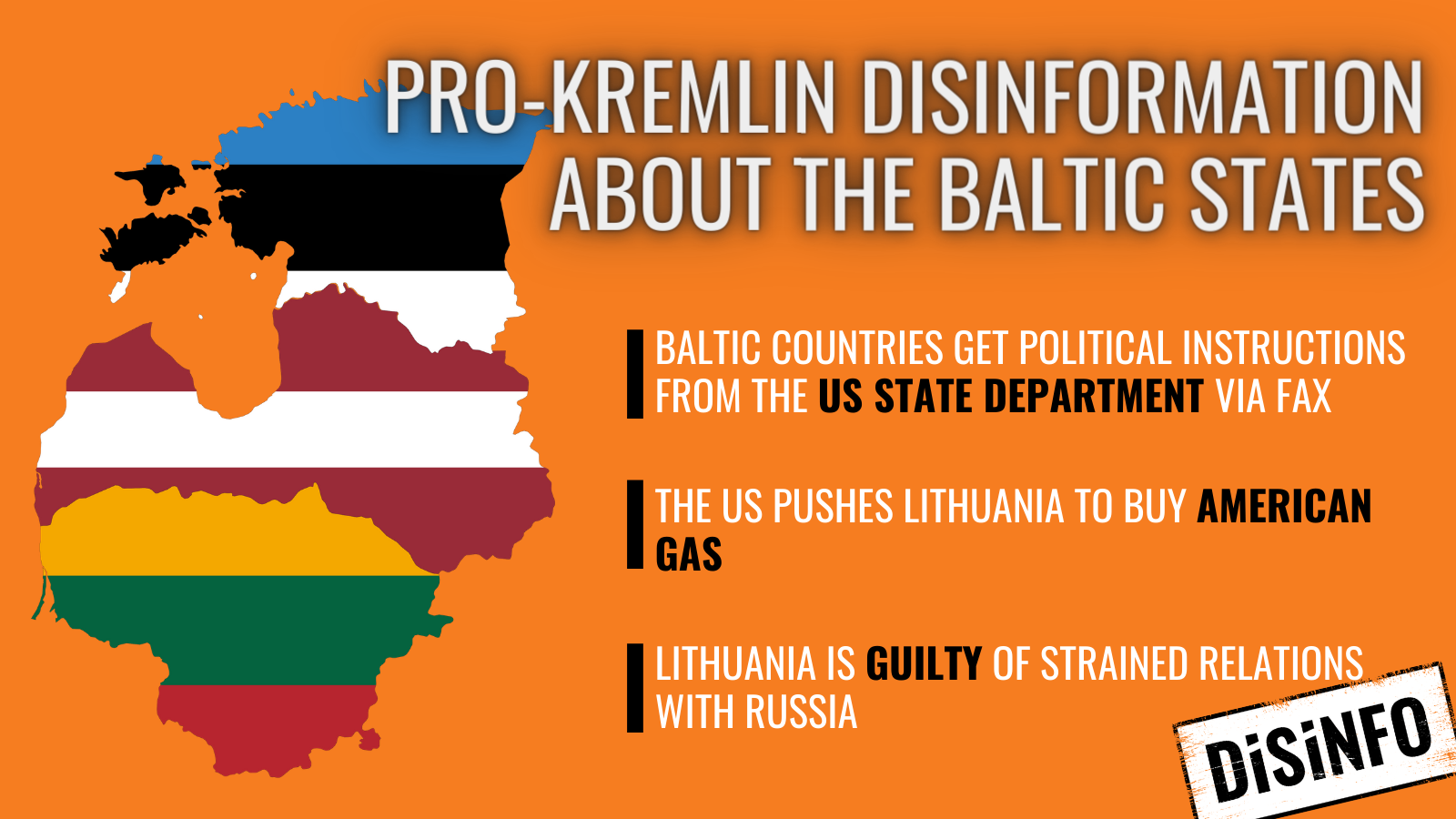 Unconstrained by facts, pro-Kremlin media uses the moniker of “colour revolution” every time it seeks to undermine democratic movements around the world. Usually, a “colour revolution” implies that malicious external forces – most frequently the US – are fuelling the popular protests. We have seen such claims in the cases of Ukraine, Georgia, Armenia, Hong Kong and Belarus.

This week, following the storming of the US Capitol building by an angry mob, Russian state-controlled TV turned to the familiar trope and tried to convince its domestic audiences that a colour revolution, orchestrated by the “Washington swamp”, took place in the US itself. Multiple pro-Kremlin outlets operating in Spanish, English and other languages relayed the message and claimed that the “deep state” orchestrated election fraud and lured the protesters to the Capitol building in order to impose a one-party system in the US and usher in an era of neo-liberal fascism. The disinformation concepts of “swamp” and “deep state” were not invented by pro-Kremlin media, nonetheless it shows a remarkable ability to appropriate and amplify them.

Anti-Semitism, never too far away from conspiracy theories and apocalyptic predictions, also proved appealing to pro-Kremlin outlets, which claimed that Zionists control both political and military leaderships of the US.

The events in Washington last week showed, once again, the real-life consequences of disinformation. For pro-Kremlin media it brought not only moments of glee, but also an opportunity to discredit democracy in America in the eyes of both domestic and international audiences, and reinforce disinformation attacks on Joe Biden, the president-elect of the United States. 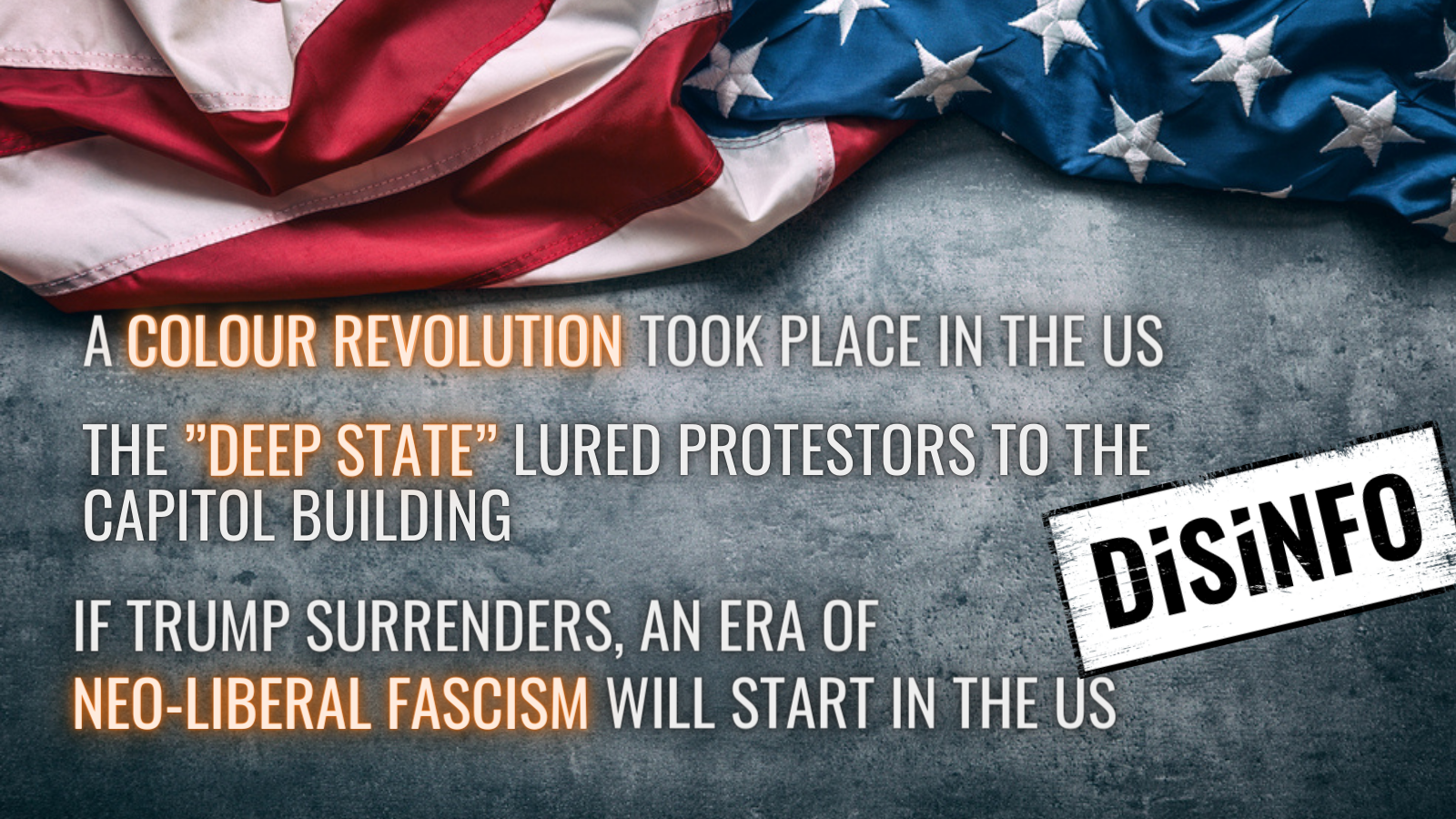 Busy covering global events through a lens of disinformation, pro-Kremlin media nonetheless found time to reinforce its narrative of “vaccine wars”. The West, it said, is against the Sputnik V vaccine as it is afraid of competition. The European Union was accused of refusing to buy the vaccine for political reasons, NATO allegedly aimed at containing Russia by discrediting the Russian vaccine and Ukraine was blamed for what pro-Kremlin media described as the planned destruction of its own people.

Yet despite the lies and vitriol spread by pro-Kremlin media, the vaccination against COVID-19 has already started across the EU, which is conducting talks with more companies to secure an even greater number of vaccines. Meanwhile Lithuanians are commemorating their victory against Soviet occupation and the next president of the United States will be inaugurated next week. 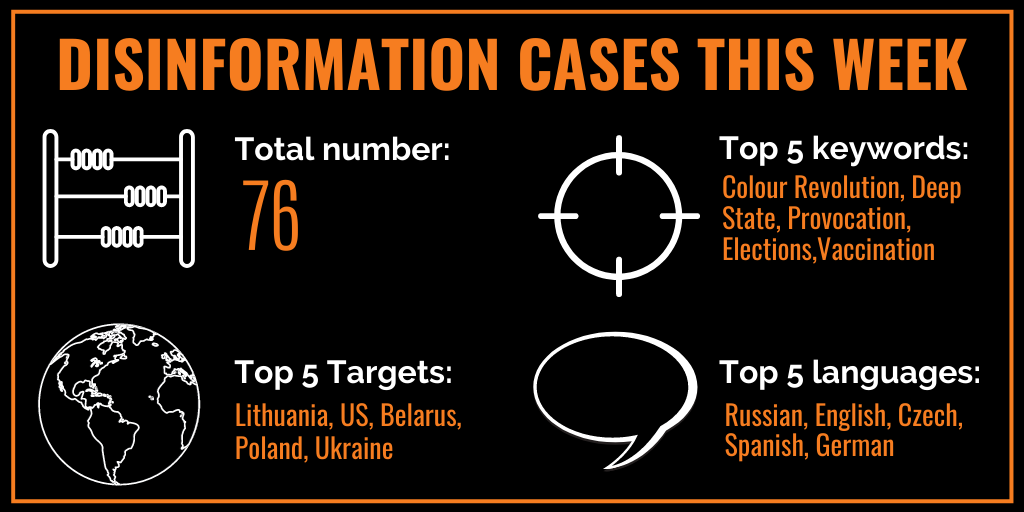