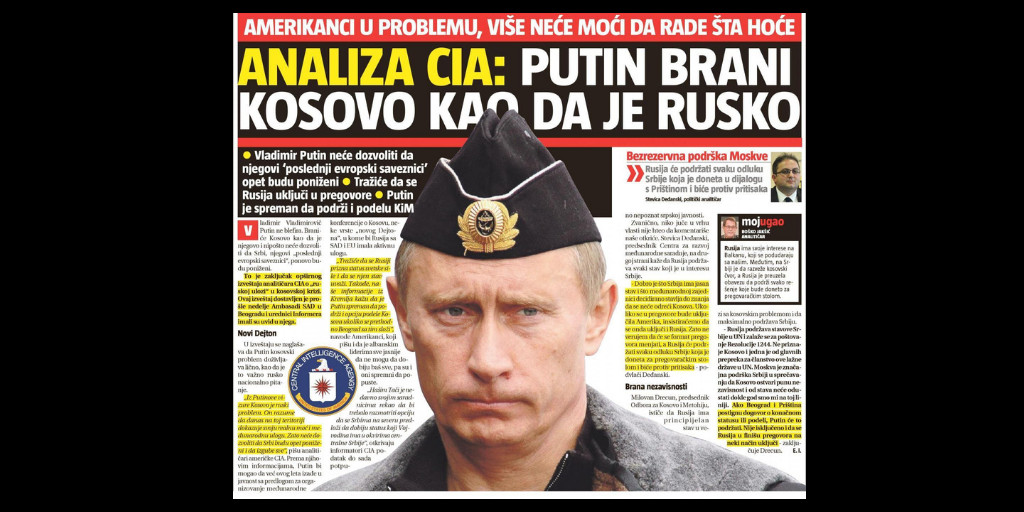 The headline of the false story says “CIA Analysis: Putin Defends Kosovo as if it were Russian”. Article was published in Informer in June 2018.

According to Serbian fact-checking portal Raskrikavanje, more than 700 false or unverified news stories were published on the front pages of three Serbian tabloids (Informer, Alo and Srpski Telegraf) in 2018.

These false or unfounded news articles were mainly pushing narratives on:

As in the past years, the most popular political figure to be pictured on the front pages of the Tabloid Informer, just after the Serbian President Aleksandar Vučić, is Russian President Vladimir Putin. Dominating the cover pages more than 60 times in 2018, Putin benefits from an exclusively positive coverage. Out of 223 cover pages, the tabloid Srspki Telegraf had 230 false news stories or news without any source quoted and one fifth of these news were devoted to Vladimir Putin and his messages of support to Serbia, Kosovo and President Vučić.

One article published in Informer in June 2018 entitled “CIA Analysis: Putin Defends Kosovo as if it were Russian” is quoting parts of a report allegedly written by analysts of the US intelligence agency. In the report, Putin is inter alia said to be taking the Kosovo issue personally “as if it was an important Russian national question”. The CIA allegedly concluded the report, which “Informer editors had insight into”, by saying that “Putin will not allow the Serbs to be humiliated again and lose everything” referring to the Russian role in the protection of Serb interests in Kosovo. The tabloid further claimed that the quoted report was delivered to the US Embassy in Belgrade. However the US embassy denied these allegations and said to Raskrikivanje: “we did not receive such a report, nor did Informer ever contact the Embassy to confirm its text, which is a common practice among credible journalists”.

According to Stefan Janjic, editorialist at Fake news Hunter (fake news tragač), in 2018 the tabloids Informer and Srpski Telegraf have announced 265 occasions of war and conflicts on their front pages. 47 of these invented wars were supposed to be conducted by “Ustashe” (pejorative name for Croats) and 30 by “Shiptars” (pejorative name for Kosovo Albanians).

Informer on its cover pages claimed that the Kosovars will attack North Kosovo by 25 April and again by 15 December last year, they also stated that a war in Kosovo will start on 15 December. None of these sensationalist and unfounded announcements materialised.

The tabloid Alo claimed that Kosovo and Albania would merge on 1st January 2019, which also turned out to be untrue.

These tabloids have developed numerous manipulation techniques such as drawing people’s words out of context, inaccurate communication of research, biased reporting, frivolous lying and inventing stories. The reasons vary from promoting specific political goals to simply increasing clicks and circulation of the media.

Raskrikavanje is a Serbian fact-checking portal, which is checking the truthfulness of news published by the Serbian media and statements given by Serbian politicians. It is a project of the KRIK portal, which has been reporting about crime and corruption for several years now.