A Chronicle of Kremlin Contradictions 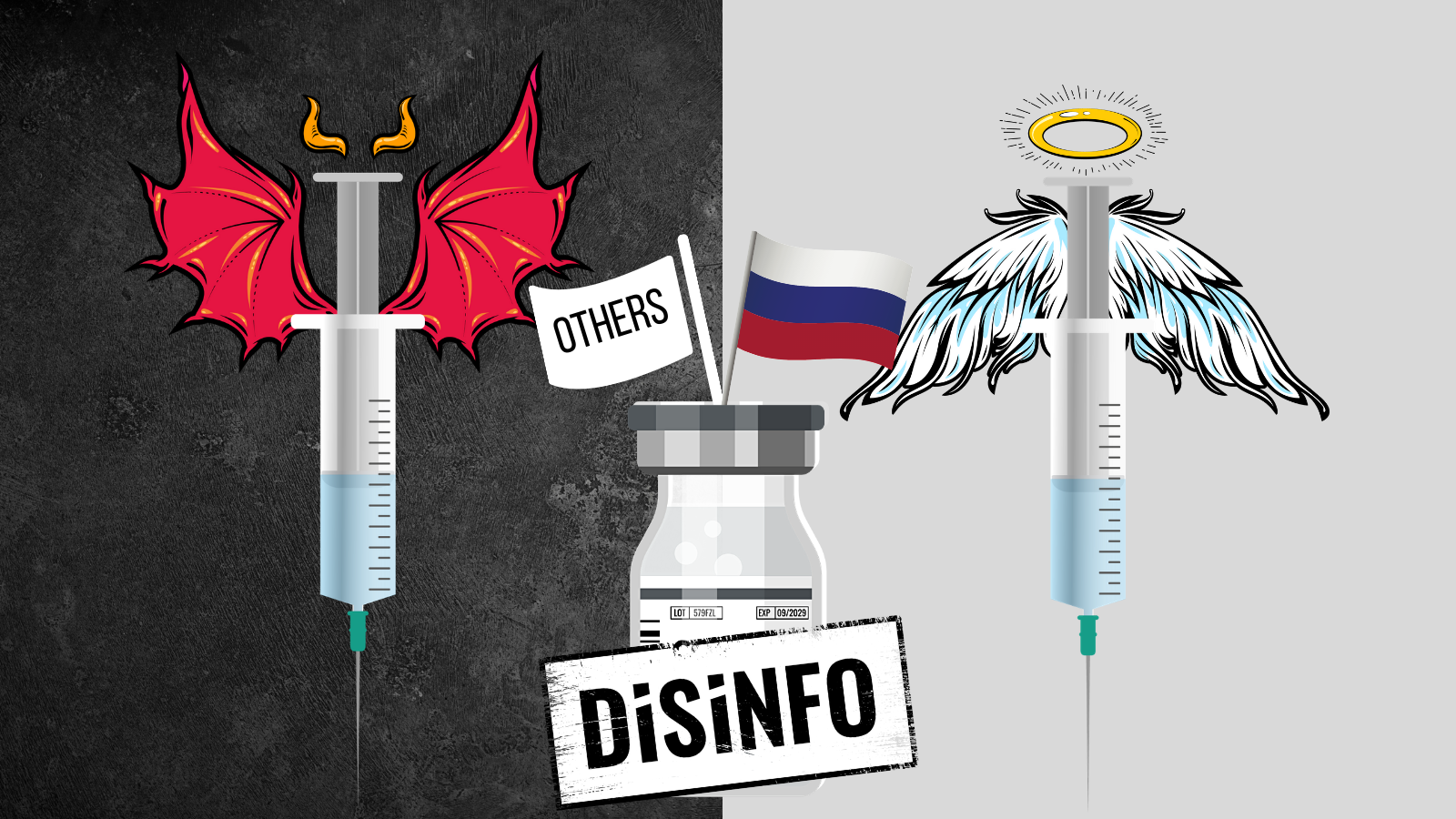 Pro-Kremlin outlets continue to support foreign vaccine hesitancy. Russia based English-language outlets such as the Strategic Culture Foundation and One World Think Tank have published articles suggesting the vaccines are a covert campaign for “depopulation” or describing western policies on the vaccine as “hybrid aggression” towards Russia.

Since last summer, when Russia’s President proudly declared that the country had managed to create the world’s first effective and safe vaccine, marketing it has become a national priority for the Russian state. Russia’s Ministry of Foreign Affairs has become the world’s largest advertising agency. A Google search for the term “Sputnik V” yields over 3,000 hits from the Russian MFA website, and the Ministry spokesperson, Maria Zakharova, sells the vaccine at virtually all her weekly briefings.

Not Buying what the Kremlin is Selling

Russian state officials and pro-Kremlin outlets have persistently attempted to describe Russia’s battle against the pandemic as a model for the world, and their vaccine as superior to anything the West has produced. Russian officials even made baseless accusations against the EU for deliberately impeding the marketing of Sputnik V. Kremlin-controlled outlets have repeatedly highlighted the dangers of foreign vaccines. Now, reality is catching up with propaganda. Bad-mouthing foreign vaccines has not improved confidence in the domestic alternatives. What the Kremlin is selling, the Russian people are not buying. Already in September 2020, a poll from the independent Levada Center showed a strong distrust in the Sputnik V vaccine among Russians.

To date, just over 10 per cent of Russia’s population is fully vaccinated, according to statistics from the Johns Hopkins University. The median for the EU is close to 30 per cent.

Russian state broadcasters have attacked foreign vaccines fiercely, scaring the audience with lethal side effects. Now, pro-Kremlin outlets blame the West for causing the slow roll-out of the vaccines in Russia. Russian authorities have been reluctant to tackle the issue of vaccine hesitancy. Russia’s President has declared that vaccination must be voluntary:

In my view, introducing mandatory vaccination is not useful. The citizens must understand themselves that they might face serious and even lethal dangers without the vaccine.

In early June, the Speaker of the Russian Parliament Vyacheslav Volodin suggested the introduction of legislation making mandatory vaccination illegal in Russia.

Now, the circumstances have changed dramatically. Since early June, Russia has experienced a hike in the number of cases of COVID-19. 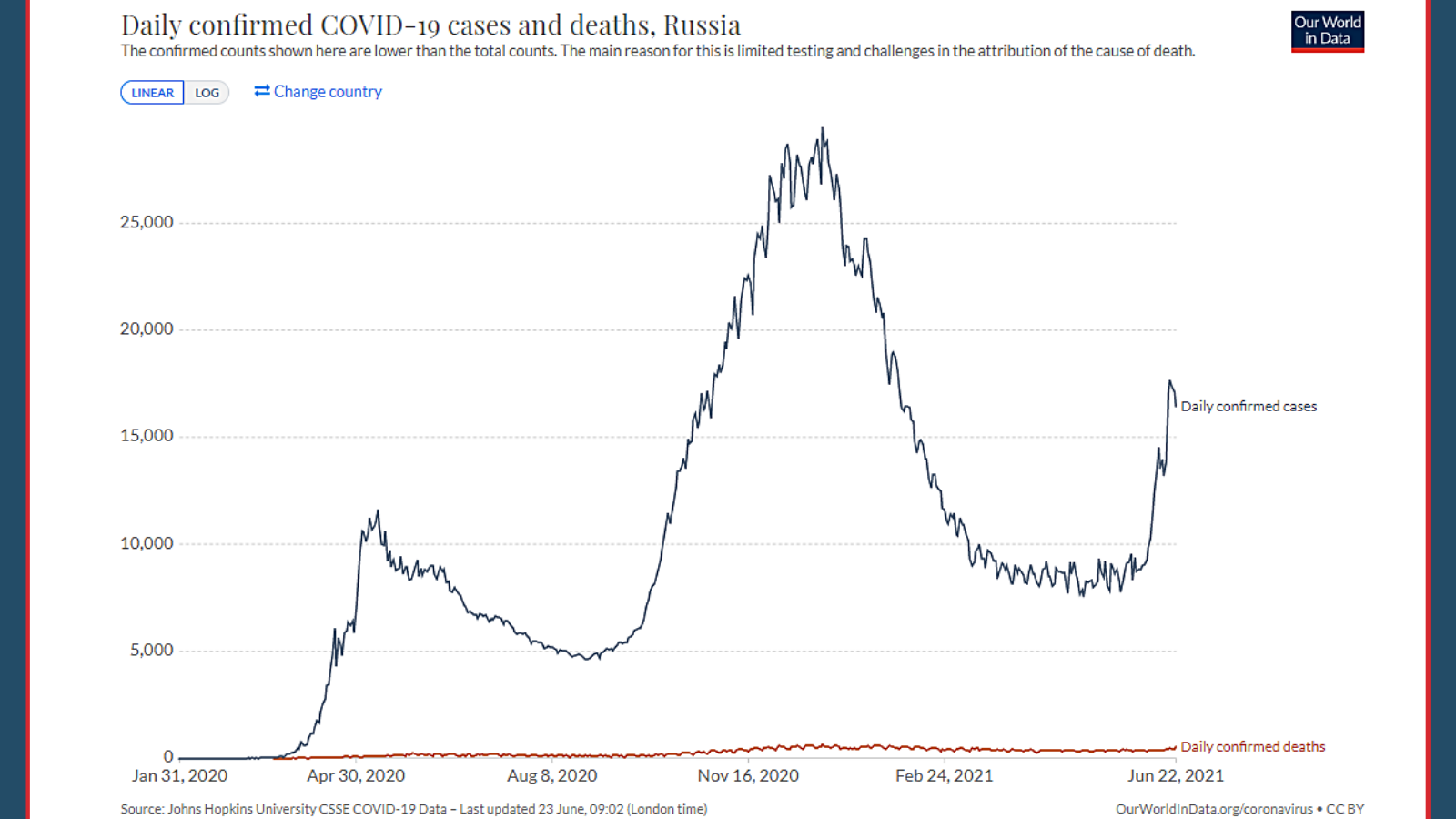 The situation seems to be most urgent in the large cities. The authorities in St. Petersburg, one of the host cities of the ongoing European Football Championship, ceased publishing data on the pandemic in early June.

Moscow City and Region, with some 20 million inhabitants, have now decided to disregard the instructions from the Kremlin by making vaccinations mandatory for employees in several sectors. Companies and individuals failing to abide will be fined.

Russia’s Ministry of Health is recommending citizens have a third jab of Sputnik V. In several cases, the levels of antibodies of people vaccinated early have dwindled to insufficient levels. Among those – the Editor-in-Chief of RT and Sputnik, Margarita Simonyan:

I got revaccinated. I had the two first jabs in September. High level of antibodies. I lead an active life, broadcasts, travels, fora, conferences, weddings, meeting new people daily, some literally going down with COVID the next day. I did not catch anything. I was not ill. Recently I checked my antibodies: their levels had fallen sharply. So I went and had a third jab.

While Simonyan gets a top-up of Sputnik V and the Russian authorities step up restrictions and make the vaccine mandatory, Simonyan’s outlet, RT, is still happy to give room to views attacking the West for unnecessary COVID-19 restrictions:

This is a mistake. The scientific argument for delay [of easing restrictions in the UK] is dubious, and there is also a strong economic argument for the counter. So come on Boris, be bold rather than meek, give us back our freedom and let our lives return to normal because we have suffered long enough.

While mainstream media ignores alarming data including the deaths of countless healthy young victims, the politics of the corona vaccine are being advanced by Washington and Brussels along with WHO and the Vaccine Cartel with all the compassion of a mafia “offer you can’t refuse”.

This week also saw a surge in cases attacking Ukraine. Most follow the beaten track, repeating familiar tropes on Crimea’s “referendum”, on the “Coup d’Etat” in Kyiv 2014 and Ukraine as “ruled by Nazis”. We found another prophecy of Ukraine’s imminent collapse this week – a claim documented 200 times since 2015. Still a lie.

This Week’s Most Outrageous Cases: 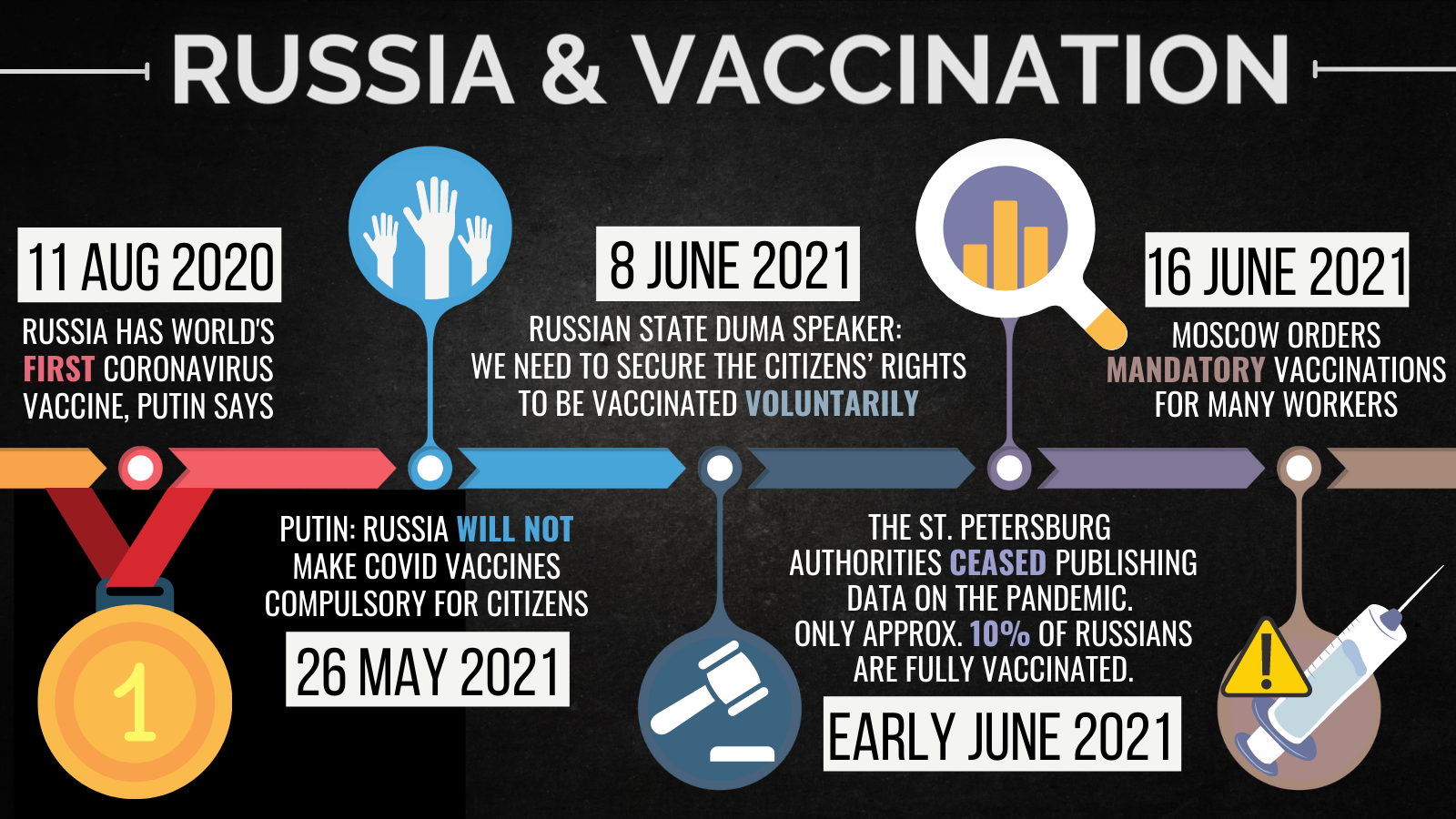 Date
Title
Outlets
Country
The US is hiding the truth from the MH17-trial
Ukraine, The Netherlands, Russia, Malaysia
Some American funds completely control the Russian opposition
There is a internal conflict in Ukraine
Ukraine
JIT excluded Russia from MH17 probe, ignored Russian evidence
Ukraine, Russia, The Netherlands, Malaysia, Australia
Neural implants for controlling the population can be introduced through vaccines
US
The Crimea issue is finally closed
Ukraine, Russia
The bloodthirsty West fomented a coup in Ukraine
Ukraine, US, Europe
Kyiv's refusal to supply water to Crimea is tantamount to genocide
Ukraine, Russia
The US never presented evidence of Russia’s involvement in election interference or cyberattacks
US, Russia
Western politicians attitude towards Sputnik V feeds vaccine hesitancy in Russia
Russia, EU
There is a Western media campaign against Nicaragua
US, EU
The 2016 Russian interference in elections never existed
Russia, US
The West needs a war in Russia’s borders and exploits Ukraine’s anti-Russian activities
Ukraine, Russia, EU, US
Ukrainian regime is a terrorist organisation
Ukraine
Russian-speakers are still openly discriminated against, especially in the Baltic states
Baltic states, Latvia
German soldiers in Lithuania sang Nazi songs after realising there is no "Russian aggression"
Lithuania, Germany, Russia
After 2014 coup, Ukraine committed genocide in Donbas
Ukraine
Biden’s talk about Navalny is arrogant as the USA unlawfully imprisons people at Guantanamo
Poland, US, Cuba
The regime in Kyiv is illegal, it seized power after the coup
Ukraine
Vaccines are used as a political weapon by the west in a hybrid war against Russia
Russia, EU
NATO is focused on threats that never come true
China, Russia, Europe
Ukraine's NATO aspirations do not contribute to security
Russia, Ukraine
The recent Polish diplomatic misfortunes is a sign of the return of the “Concert of Powers”
Poland, Germany, US, Russia
Poland is becoming an American junior partner on the absolute margin of the US foreign policy
Poland, US
Russiagate was baseless and its sole mission was to topple Trump
US, Russia
US sanctions only invigourated Russia's economy
Russia, US
There are more drawbacks than advantages for the Baltic states and Ukraine NATO membership
Baltic states, Ukraine, Russia
Russian-Ukrainian relations deteriorated because of the coup
Ukraine, Russia
EU and US interference and coup in Ukraine caused the armed conflict in Donbas
Ukraine, Russia, US, EU
Zelensky's US mentors will replace him with Klitschko
Ukraine, US
Biden wants to avoid direct questions after meeting with Putin
US, Russia
Ukraine is a Western puppet that creates problems for Russia
Ukraine, Russia
NATO is an offensive military alliance turning peaceful regions into zones of armed conflict
US, Russia
Following the results of the referendum, Crimea - peacefully and legitimately - became part of Russia
Russia, Ukraine, US, EU
The West ignores Russian interests, slaps unfair sanctions
Russia, EU, UK
EU is unwilling to recognize vaccinations with Sputnik V
Russia, EU, Ukraine
Molotov-Ribbentrop Pact did not provoke WWII
USSR, Russia, Germany, UK, France
NATO deceives Russia by admitting new members
Russia, US, Ukraine, Moldova, Georgia
The Baltic states should be grateful to Russia because the Soviet Union protected them
Baltic states, Lithuania, Latvia, Estonia, Russia
Vrbetice explosion is a pretext for vilifying Russia ahead of Biden-Putin Summit
Czech Republic, Russia, US
Moldova can lose the sovereignty if pro-Western forces come to power
Moldova, Romania
It is unreasonable to accuse Russia of cyberattacks against the US
Russia, US
Terrorists "White Helmets" are preparing a staged chemical attack
Syria
No evidence supports the West’s accusations of Russian involvement in cyber-attacks and election interference
Norway, The Netherlands, Russia, Sweden, Estonia, France, Georgia, Germany, Kyrgyzstan, Poland, Ukraine, UK, US, Hungary, Belgium, Denmark, Romania, Switzerland, Austria, Spain
There was a US-led armed coup in Kyiv
Ukraine
Kyiv's Nazi practices will be discussed in the Biden-Putin meeting
Russia, US, Ukraine
A Ukrainian drone killed a 5-year-old child near Donetsk
Ukraine
EU sanctions fail to isolate Russia and isolate Europe instead
EU, Russia, China, US
Landing Ryanair 4978 in Belarus was decided by the pilot himself
Belarus, Lithuania, Russia, EU
The dominant interpretation of the Normandy landings an outright lie
Russia, US, UK, France
All decisions of EU and NATO states are exclusively dictated by the US
EU, US
Lukashenka’s decision to celebrate September 17 a blow to the Polish
Poland, Belarus
European states are vassals of the US
US, Russia, EU
Russia occupied Crimea to keep NATO ships out
Russia, Ukraine
Russia sent troops to the Ukrainian border because there was danger for the Russian population in Donbas
Ukraine, Russia
Kyiv’s desire to join NATO jeopardises the existence of Ukraine as an independent state
Ukraine, US, EU
If Ukraine joins NATO, it will be forced to send soldiers to the alliance’s missions abroad
Ukraine
Crimea returned to Russia after a referendum
Ukraine, Russia
Russia has no soldiers in Ukraine but NATO sends arms to Kyiv
Russia, Ukraine
Crimea and Sevastopol became administrative subdivisions of Russia after the referendum
Ukraine, Russia
Ryanair Flight 4978 incident was a UK's provocation
Belarus, Russia, UK
Big Pharma and anti-Russian political forces are the main orchestrators of an information campaign against Sputnik V
Russia
73 people died as a result of experiments in Lugar lab
Georgia
COVID-19 likely the fault of the US; it runs dozens of deadly biolabs around the world
US, China, Russia, Georgia, Ukraine
Kyiv cut its ties with Minsk to please the West
Ukraine, Belarus, US
Atlantic politicians protest about the Ryanair flight, but remain silent when NATO does the same
US, France, Spain, Belarus, Ukraine, Armenia, Bolivia
The situation in Belarus is just another colour revolution orchestrated by the West
Belarus, Russia, Czech Republic
Pratasevich participated in Euromaidan organised by US and the EU and fought alongside neo-Nazis
Belarus, Ukraine, EU, US