A disinformation story from Serbia: A mother fined for refusing to dress her son as a girl in Germany 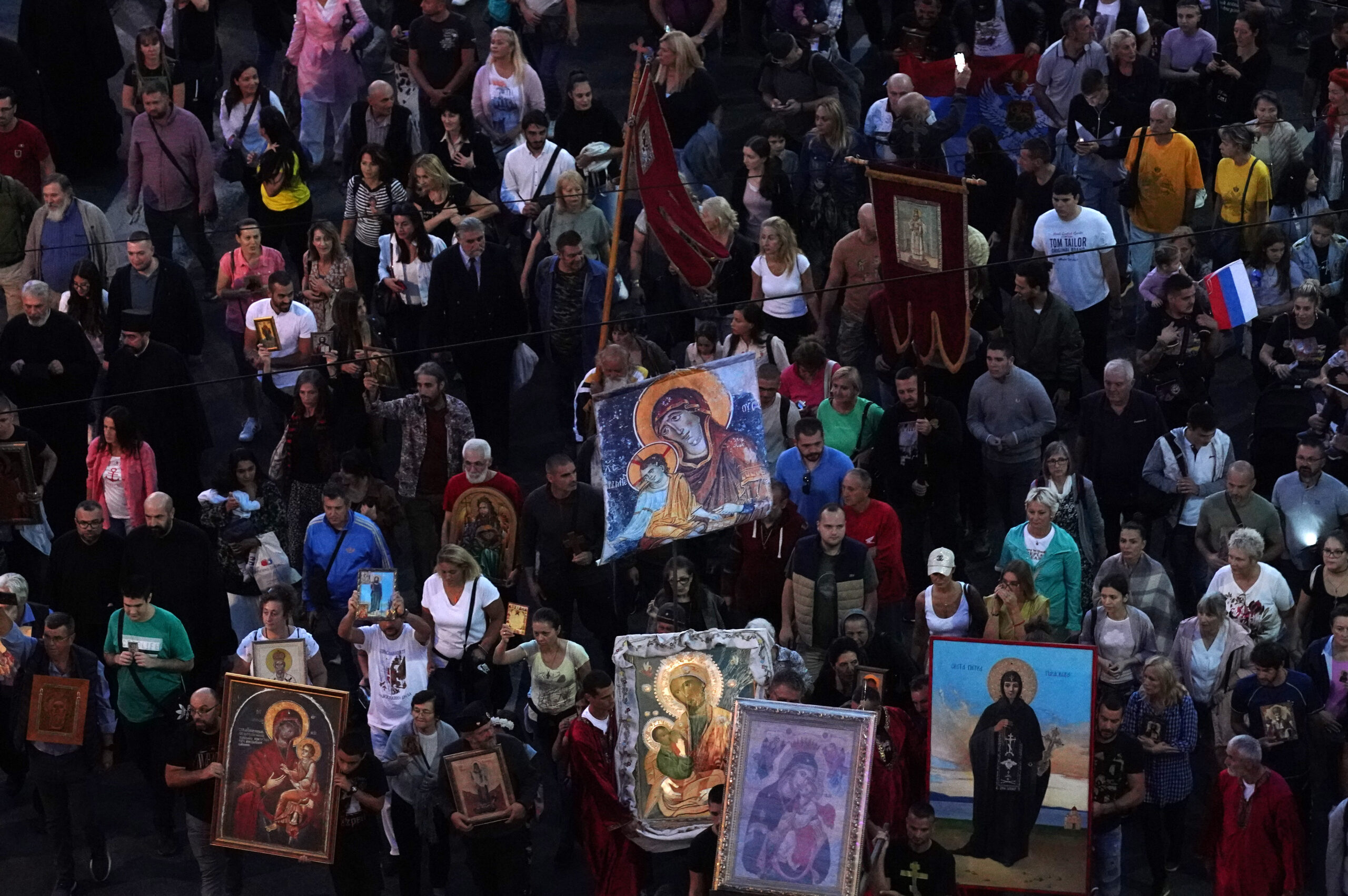 In the Serbian information environment, a Twitter account circulated the story of a Serbian mother living in Germany who was allegedly fined for not dressing up her son as a girl at the request of the school. The video was disseminated a few weeks before Serbian capital Belgrade was scheduled to host the 2022 EuroPride, at the end of September.

“A worried Serbian mom from Germany” or “a Serbian mother from mother Russia”?

A Twitter account owned by the leader of a local anti-globalist movement promoted on 20 August a video announced as a “testimony of our sister Milka, who lives and works in Germany”. It was filmed in the Serbian city of Niš during a signature campaign petitioning against the organisation of the EuroPride in Belgrade. The tweet further stated that “the situation she had in the EU will not pass in Serbia. Men will remain men, and women, women”.

In the video, the woman introduced herself as a Serbian living in Germany. She claimed that a note was sent by the German Ministry of Education instructing boys to wear dresses and girls to wear boys clothing at school to help find out if they were male or female. She further stated that when she refused to dress her son as a girl, she received a fine of 263 euros. Following this experience, she said that she decided to return to live in Serbia.

The video was widely circulated and commented on, including by the Serbian diaspora in Germany, almost immediately casting doubt on the veracity of the statements.

A few days later, a rumor was launched on Twitter stating that the woman from the video was a Russian working at the Russian Humanitarian Center in Niš. According to the same Twitter account, she had allegedly left Serbia “in fear of arrest at the request of Germany because of the lies she told in the clip circulating on social networks!” This rumor was also a matter of controversy and was refuted on social media. 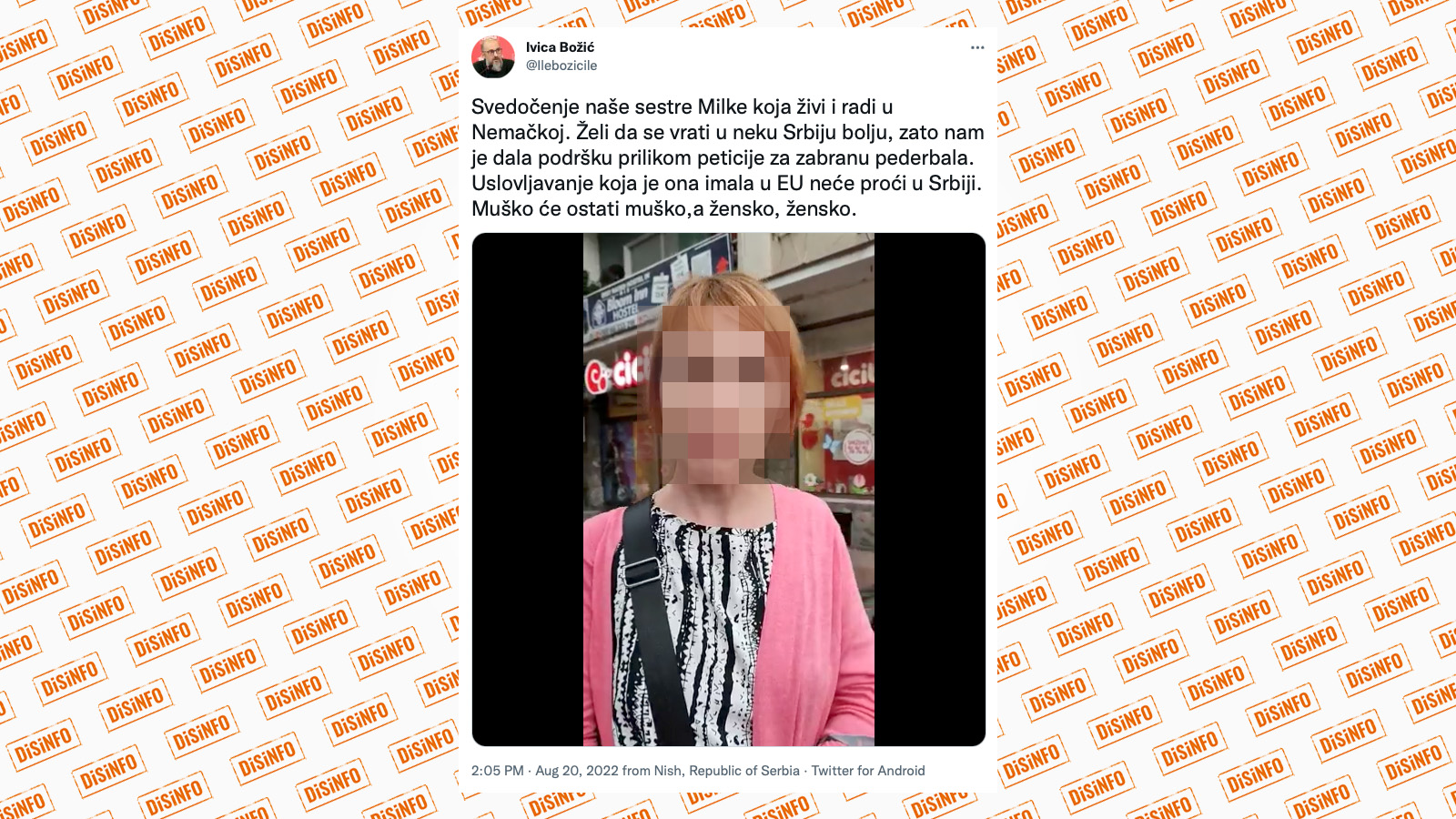 A woman manipulated by disinformation creators

The video was rapidly debunked by Serbian media and fact-checkers, and also by individuals from the diaspora.

The woman herself confessed in the end that she had been manipulated by the author of the tweet and that she got confused. She denied being Russian and explained that she was a Serbian citizen who had been living in Germany for almost half of her life. According to the explanations she gave to a Serbian newspaper, it appears that the situation was a “role reversal exercise” (Rollentausch), and that it was neither mandatory nor ordered by the Ministry of Education. She also said that she had to pay 263 euros not in relation to this project but due to her child’s unjustified absence from school.

In an article debunking the case headlined “Internet saga: Who really is the Serbian mom from Germany?”, the sociologists interviewed concluded that the video was specifically made in the context of the EuroPride and that such videos circulating on the Internet play a significant role because they seem authentic and the audience trusts them. “Another thing that adds authenticity is that ordinary people are behind such recordings, and that adds importance. The impact is greatest on the population that hesitates about a certain issue”, said sociologist Dalibor Petrović.

Disinformation and manipulation narratives have been multiplying in the context of the EuroPride in Belgrade. They started initially with messages on the monkeypox outbreak, claiming the event was a “biological bomb” aiming at the biological destruction of Serbia and the Serbian nation.

There is a clear anti-EU and anti-Western tone in claims that “unnatural” behaviours are being imposed on Serbian society by Western countries. In this dichotomy, Russia is always opposed to “the West” as the defender of traditional values, religion, the family, morality and even common sense. The “threatened values” are a recurrent pro-Kremlin narrative.

On Sunday, 28 August, a protest against EuroPride was led by clergy from the Serbian Orthodox Church and the Serbian branch of the Night Wolves, a Russian biker group that staunchly supports Vladimir Putin. Protesters claimed to be defending traditional family values, and some of them carried crosses and Russian flags.

The EU supports equality and rejects all forms of discrimination. EuroPride was first held in 1992 and advocates for equal rights of LGBTIQ+ persons across Europe, giving a voice to those facing discrimination, violence or hatred for no reason other than their sex, sexuality or gender. Belgrade won the selection to host the EuroPride 2022 in a landslide vote competing with cities such as Barcelona and Dublin.