Copycat site to the left, original fact-checking initiative to the right.

Last week, five Swedish publishers started a common fact-checking initiative, with the aim to reveal the spread of constructed and invented news, in order to contribute to an open, inclusive and fact-based public debate. The site is called faktiskt.se. But even before the site was launched, a very similar site, with the same name and almost the same visual identity appeared, as pointed out by Swedish journalist Patrik Oksanen.

The copycat site states it is a reaction the original fact checking site, calling the cooperation between the established publishers a ‘Ministry of Truth’- a term often used in the disinformation sphere to discredit fact checkers and actors working against disinformation. But that is not the only tell-tale sign of something fishy going on. The copycat site claims to be a cooperation between “Swedish media” and “experts” without any further information about who those experts or media might be. The site was started by NewsVoice, a site known for spreading pro-Kremlin disinformation narratives as well as conspiracy theories about vaccines, and Nya Dagbladet, a site claiming to be a news site which runs a campaign for “ethnic rights” of Nordic people.

It is no surprise then, that the first “fact checks” made by the copycat concern the Skripal case, judging the claim that Russia is behind the poisoning as ‘likely false’- blaming “all major Western media” as source for the ‘rumour’. And whereas the original faktiskt.se clearly adheres to the rules for Swedish media as well as the guidelines set up by the International Fact-Checking Network (IFCN), the copycat states that it “broadly” follows the IFCN’s code of principles.

This is not the first time Sweden has seen a fake fact checker, although it is the first case of a copycat version of a real fact checker, with the obvious aim to confuse the audience and discredit fact checking. We have seen the copycat approach previously, for example when well-known pro-Kremlin mouthpiece Johan Bäckman started a copycat website targeting the Hybrid Centre of Excellence in Helsinki. The aim, again, was to confuse the audience and discredit the actors working against the spread of disinformation. 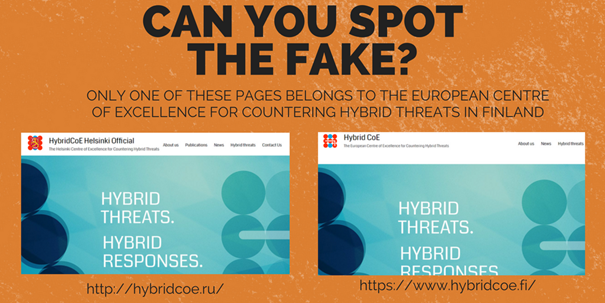 Bäckman is reportedly joining another new initiative by Eurasian National Front, which is a faction of All-Russia People’s Front, an organization led by president Vladimir Putin. The new movement is called “Against fake news” and there is not much known about its activities yet, but the description of its work is far from checking facts. It announces it will expose fake news that are used in “provocations against the stability” in the whole world, “against Russia’s relations with other countries”, “against Russia, European countries, US and others”. One of its founders is Dmitry Yermolayev, who the Latvian security services identified as an officer of Russia’s Federal Security Services (FSB) and who worked at the Russian embassy in Latvia under diplomatic immunity.

Tellingly, the report about the new initiative came from Ria Fan, a project of the St. Petersburg troll factory.

When nothing is true and everything is possible

Behind the smokescreen: Who are the actors spreading disinformation on ex-spy poisoning?