A (Kremlin) Star Is Born 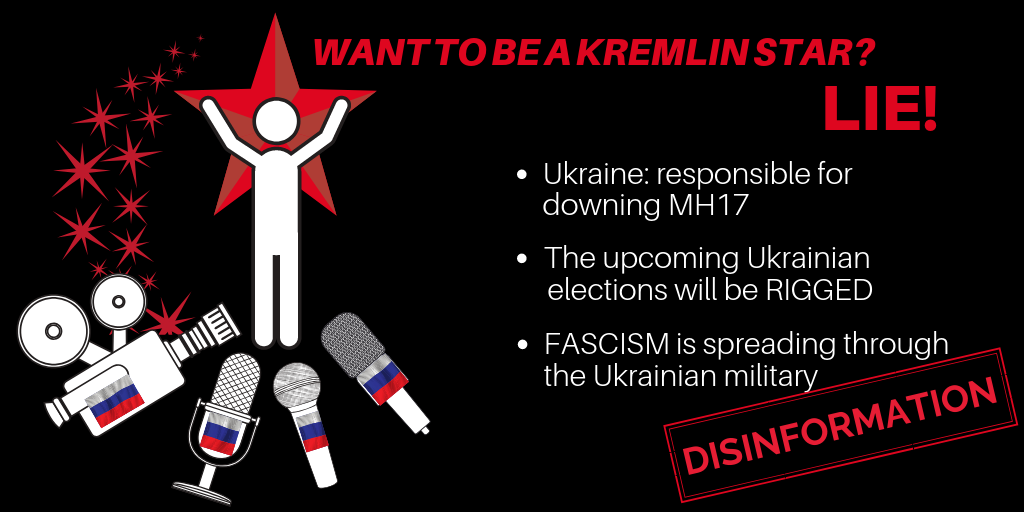 Christmas came early for the Kremlin this year in the form of Vasiliy Prozorov, an alleged defector from Ukraine’s state security service, who is zealously promoting all manner of conspiracy theories about his homeland.

In Russia, where he is currently taking “refuge”, Prozorov has predictably received star treatment. On Monday this week, the Kremlin rolled out the red carpet for a highly-publicised press conference that gave a serious platform to Prozorov’s fever dreams. He promoted a smorgasbord of the Kremlin’s favourite anti-Ukrainian narratives: that Ukraine, naturally, was responsible for the downing of Flight MH17; that Kyiv was never interested in a peaceful resolution to the war in Donbas; that fascism is spreading wildly among the ranks of Ukrainian military and police; and that the upcoming presidential elections will be rigged.

But it is also important to give credit where credit is due, and Prozorov unquestionably deserves some points for originality. As it turns out, the Ukrainian secret police apparently established a clandestine torture prison in Mariupol called “The Library” where inmates are dehumanised and referred to as “Books”. Hundreds of people have been tortured here, and at least two killed. As “evidence” to support these claims, Prozorov even brought props to the event: a handful of vague and entirely unverified documents and photographs purporting to show the facility and injured prisoners.

The Kremlin’s newest star also revealed that officials from the CIA and MI6 are training Ukrainian special forces to carry out terror attacks in Donbas in order to undermine the local resistance. Some Russian parliamentarians were quick to jump on the bandwagon and are already demanding that the US and Britain investigate these allegations.

Prozorov’s performance also had the Russian state media frothing at the mouth in excitement. They reported on the press conference in real time to maximise its impact, churning out sensationalist headlines and uncritically repeating Prozorov’s claims.

NATO: Ever the Aggressor

March 24th marked the twentieth anniversary of NATO air strikes against Serbia, then still part of Yugoslavia, in response to the killings of Kosovar Albanians. The occasion was eagerly exploited by the pro-Kremlin media to push the false narrative that NATO is a belligerent, imperialistic power hell-bent on the destruction of Russia and other countries deemed problematic to its interests. NATO has long been a favourite topic of pro-Kremlin disinformation outlets, but this week they went into overdrive with efforts to show that, twenty years after its “criminal” bombing campaign against Serbia, NATO has devolved into the world’s largest terrorist organisation. 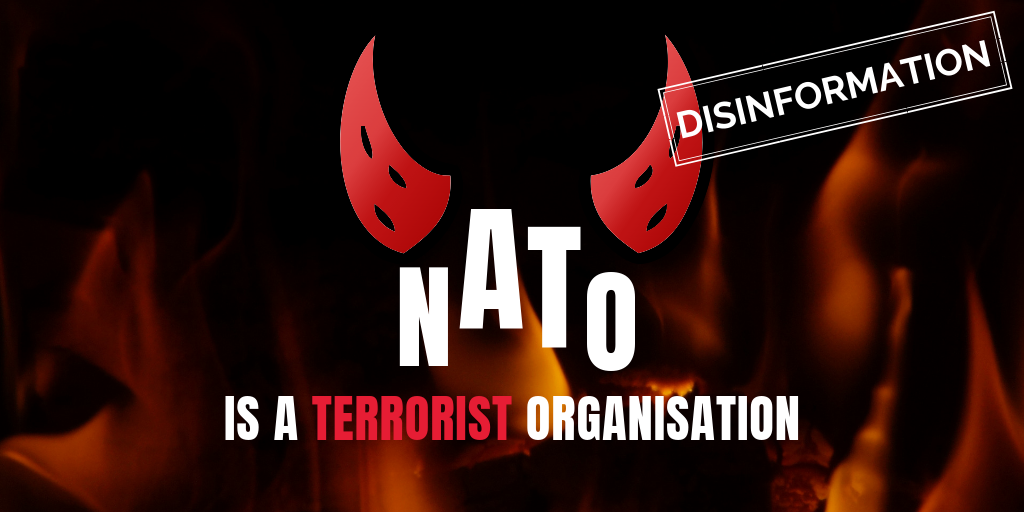 Disinformation about NATO typically involves elements of both historical revisionism and fearmongering about the alliance’s alleged hostile intentions. We are told that NATO “destroyed” Yugoslavia because it was an obstacle to US plans for the Trans Adriatic Pipeline and because it prohibited the Western Balkans from joining the EU. The 1999 bombing campaign was a “genocide” that deliberately aimed at environmentally dangerous targets to ensure as much death and destruction as possible. But these Russian narratives about Yugoslavia, which have always framed NATO intervention as illegitimate and ruthlessly destructive, grossly distort this sensitive and complex issue.

As the humanitarian situation in Kosovo deteriorated, fuelling pressure for international intervention, NATO bypassed the UN to authorize air strikes unless Serbian leader Slobodan Milošević agreed to get “Serbs out, peacekeepers in, refugees back [to Kosovo].” After Milosevic refused the terms and NATO began its air strikes against government infrastructure, Serb security forces escalated their violence and ethnic cleansing in Kosovo. Finally, in June 1999, after approximately 500 civilian deaths from the strikes, Milosevic agreed to allow international troops into Kosovo. From the beginning of Operation Allied Force, NATO pledged to minimise civilian casualties.

In the world of pro-Kremlin disinformation, however, there is no room for nuance. Today, we are told that NATO is as aggressive as ever, with imminent plans to invade Russia. Thousands of troops are already stationed along Russia’s border for this very purpose! Alternatively, NATO’s future military campaign against Russia will use Ukraine as a springboard, which is why the West is presently seeking to gain control of the Ukraine-Russia border.

We are told that NATO poses a serious threat to other countries as well. In Macedonia, Montenegro, and Bosnia, NATO is perceived as a dangerous weapon of the United States, deployed only in pursuit of its own imperialistic agenda. And the alliance is accused of conquering Ukraine and attempting to destroy Venezuela – which is ironic, considering it was Russia that invaded Ukraine, annexed Crimea, and continues to wage war in the east, and that it was Russian planes carrying troops that landed in Venezuela earlier this week. By contrast, NATO activity in Ukraine has been limited to joint military exercises, and no NATO troops are present in Venezuela.

Date
Title
Outlets
Country
The DniproHES dam will wash Ukraine into the Black Sea in 2020
ukraina.ru
Ukraine
NATO is preparing an invasion of Russia
cont.ws
Russia
1999 NATO bombings of Yugoslavia killed thousands
RT France - YouTube, Sputnik France
Kosovo, Serbia
The US will win the elections in Ukraine
Tsargrad TV
US, Ukraine
Ukraine was involved in the shooting down of MH17
RT Germany (old)
Ukraine
Ukrainian Secret Services defector reveals the truth behind MH17: it was the Ukrainians
rg.ru, SouthFront - English, kp.ru, tvzvezda.ru, Ria Novosti
Ukraine, Russia
UK and US specialists are training Ukrainians to perform terror attacks
Ria Novosti
UK, US, Ukraine, Russia
Ukrainian Secret Police has established a secret torture prison in Mariupol
Ria Novosti, Ria Novosti
Ukraine, Russia
The elections in Ukraine are controlled by the SBU
Ria Novosti
Ukraine, Russia
Fascism is spreading among the ranks of the Ukrainian military
Ria Novosti
Ukraine, Russia
Kyiv was never interested in a peaceful solution of the conflict in Donbas
Ria Novosti
Ukraine, Russia
Ukraine responsible for MH17 downing
RT English
Ukraine, Russia
Robert Mueller's report: There are no traces of Russia's interference in US elections
vesti.ru, Tsargrad TV, rg.ru
US, Russia
NATO is the 'North Atlantic Terror Organisation'
RT Germany - YouTube
By promoting colour revolutions, the West is threatening the world peace
Sputnik Spain
NATO destroyed FRY because it was preventing the Western Balkans to join the EU
Tsargrad TV
Yugoslavia, US
NATO is a real danger in the Western Balkans and has destroyed Montenegro's army
RT France - YouTube
North Macedonia, Bosnia and Herzegovina, Montenegro, US
US withdrew from the INF Treaty to forward a principle of nuclear first strike
Sputnik Italia
US
If Poroshenko wins the elections, he will start a war against Russia
utro.ru
US, Ukraine, Russia
Ukraine does not allow international human rights defenders to annexed Crimea
Ria Novosti - Crimea
Ukraine, Russia
Poroshenko plans an attack against OSCE to get a pretext for cancelling the elections
News Front - English, News Front - Spanish, News Front - German, News Front - Serbian
Ukraine
Ukraine is becoming an unsolvable problem for US and EU
Sputnik France
US, Ukraine
Large-scale falsifications to take place during Ukrainian elections
ukraina.ru
Ukraine
By not inviting Russia to commemorate the start of the WWII, Poland wants to destroy the world order
Pervyi Kanal
Poland, Russia
Kyiv conspiracy against Trump uncovered
utro.ru
US, Ukraine
US general confirms Washington is obsessed with preventive nuclear strike policy
US
EU to introduce visas for US citizens in 2021
US
Venezuela bustling with life, contrary to mainstream narratives
RT English
Venezuela
Lithuania fights against Belarusian NPP on the orders of Sweden and Finland
Sputnik Belarus - Russian
Sweden, Finland, Belarus, Lithuania
EU refuses to admit that Russian border guards prevented the armed conflict that Kyiv was trying to unleash
RT Russia
Ukraine, Russia
The Atlantic Council is a NATO propaganda organisation
RT Russian - YouTube
US
Russian take-over of Crimea prevented Belarus from becoming a vassal state under the US and Poland
Together with Russia, Politring
Poland, Belarus, Ukraine, Russia
Five years after the referendum, the well-being of Crimea’s population has significantly improved
Sputnik Italia
Ukraine, Russia
Venezuela crisis caused by US sanctions
Sputnik English
Venezuela, US
The EU sanction lists against Russia are illegal
Sputnik Poland
Ukraine, Russia
EU and NATO's version of what happened in the Kerch Strait is stimulating war-mongering mood in Kyiv
Sputnik Poland
Ukraine, Russia
Moscow did not trigger the conflict in eastern Ukraine
Sputnik Germany
Ukraine, Russia
International law experts have denied the claim that Crimea had been annexed
Sputnik Germany
Ukraine, Russia
2014 Crimea referendum on reunification with Russia was democratic and held in compliance with international norms
Sputnik South-Ossetia
Ukraine, Russia
Poland and Ukraine established institutions to lie about history
Sputnik Poland
Poland, Ukraine
Crimea was not annexed, but returned to the homeland as a result of a democratic referendum
Sputnik Germany
Ukraine, Russia
Russophobic fascist West wants Ukraine to destroy Moscow
Together with Russia
Ukraine, Russia
Ukraine has banned a number of life-saving medicines
antifashist.com
Ukraine
Ukraine is NATO's springboard for its future military campaign against Moscow
Together with Russia
Ukraine, Russia
The US and EU countries are Russophobic, fascist and Nazi regimes
Together with Russia
Russia
The West incites anti-Russian sentiment in Ukraine
Nash TV Channel - YouTube
US, Ukraine, Russia
Ukraine risks on being ripped apart
News Front - Hungarian
Ukraine
US promises loans to Belarus only if the opposition controlled by the West gets 45% of votes in the parliament
regnum.ru
UK, US, Belarus
US is supporting Ukraine for staging provocations against Russia
News Front - Hungarian
UK, Poland, US, Ukraine, Russia
The Bulgarian people support Venezuela
News Front - Hungarian
Venezuela, US
UK destroys evidence related to the Salisbury incident and prepares to announce Skripal's death
RT Russia
UK, Russia
By continuing to browse the site you are agreeing to our use of cookies.