A Movie as “New Evidence on Fake Chemical Attack” – Again 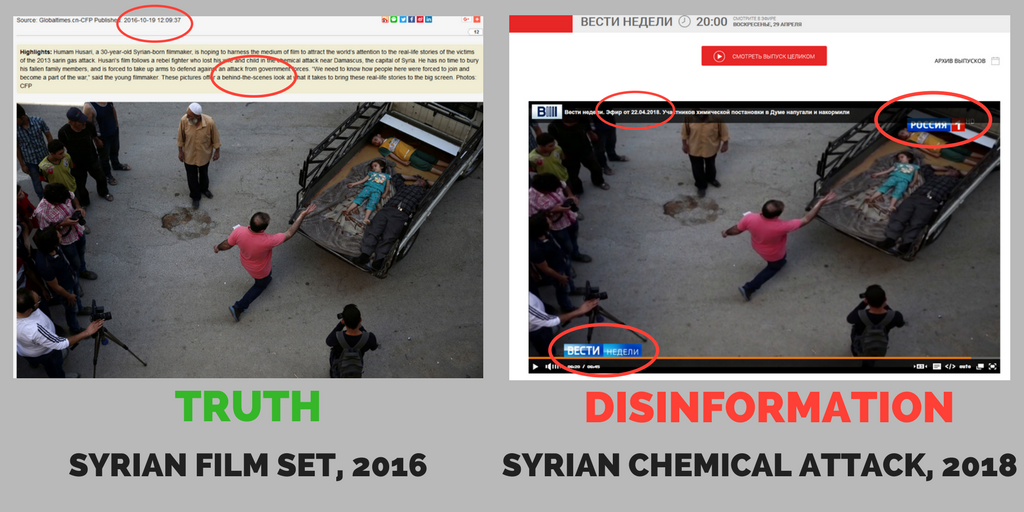 A little girl in turquoise t-shirt and pants, a boy and an older man are lying on a vehicle. Their bodies look dead, but at the same time a neat and clean film crew with cameras is surrounding them. What is happening there?

The true sad story behind these images – and the people depicted – is that they were falsely presented on Russian state-controlled TV as “new evidence of a fake chemical attack” on April 7 in Douma, Syria. “The Western politicians and the media are ignoring the obvious evidence that there was no chemical attack in Douma”, the presenter tells when the images are shown on Pervyi Kanal.

In fact, the images were published already in 2016, as independent Russian media The Insider and TV Dozhd, quickly noticed. They tell the behind-the-scenes story of a Syrian-born director, who was shooting a film to attract international attention to the victims of the 2013 sarin gas attack.

Only a week earlier, Russian state TV got caught out for repeatedly recycling images from another movie, Revolution Man, naturally as a “proof of the White Helmets faking pictures”. The same disinformation was first published by Russian Defence Ministry TV channel Zvezda already in March, a month before the attack.

When reports of the Douma chemical attack first appeared, the pro-Kremlin disinformation machine was well-prepared. It had discredited the volunteer and rescue group White Helmets since 2015, but the attempts accelerated after the Khan Sheikhoun chemical attack last year. And it didn’t stop when the UN war crimes investigators concluded that the attack was carried out by the Syrian regime. Last week, the Russian Foreign Ministry again falsely referred to White Helmets “manipulation using children in staging an alleged chemical attack in Khan-Sheikhoun”.

Beefing up the flow of disinformation

When the aim is not to inform but to disinform the audience, getting caught lying does not actually harm achieving these goals. The priority is to beef up the disinformation narrative with a flood of new stories. The same purpose was served with a variation of false messages like “Western methods in Syria now are like Nazi propaganda in 1939” or that “the West destabilises Armenia to weaken Russia in Syria”. 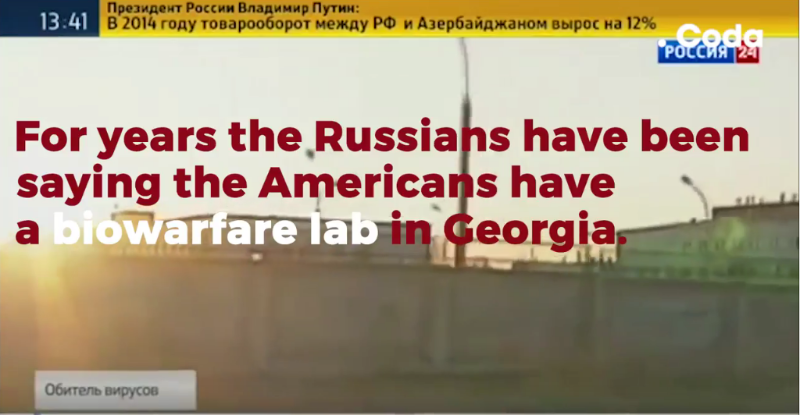 Coda story interviewed the director of the Lugar laboratory.

A lower-level disinformation activity was reported regarding the civil protests in Armenia. Disinformation outlets repeated the expected false message of a “Maidan scenario: West behind the Armenian protests” But this time the coverage on main Russian TV channels followed carefully the position of Russia’s foreign ministry and rejected these parallels.

In neighbouring Georgia, we saw a new wave of old disinformation spread about biological weapons being developed by the US in the region. The Russian Foreign Ministry drew a link to the Salisbury attack and the disinformation was repeated in the Georgian language.

Another line was that people living close to the so called Lugar laboratory are like “patients of Mengele”: they did not guess the threat but later understood that they were placed in death camps. For facts to clear your mind from years-old disinformation see here.

See all the disinformation cases reported during the past week:

Date
Title
Outlets
Country
12 snipers from Lithuania and Georgia arrived in Donbas
ntv.ru
Ukraine, Lithuania
Maidan scenario: West behind the Armenian protests
RIAFAN - Russian
Armenia
EU plans to destroy vineyards in Romania, the next one will be Republic of Moldova
Moldavskie Vedomosti
Romania, Moldova
Georgian trace may be found in the case of poisoning ex-GRU colonel Sergei Skripal in Great Britain
Saqinform
UK, Russia, US, Georgia
New evidence that the chemical attack in Douma was a fake
Pervyi Kanal
Syria
Only fake evidence of a chemical attack in Douma
Mid.ru
Syria
For 235 years, Crimea is Russia's
Ministry of Foreign Affairs of the Russian Federation (English), newsland.com
Russia, Ukraine
The Istanbul Convention includes full rejection of national culture, introducing juvenile justice and gay-parades in Armenia
Pravda.ru
Armenia
The White Helmets is an organisation that creates fakes and makes propaganda on behalf of jihadists and terrorists
Syria
Britain seeks another anti-Russian provocation
Vesti nedeli @Rossija 1, 19:30
UK, Russia
Western methods in Syria now like Nazi propaganda in 1939
Vesti Nedeli @Rossiya 1, 16:00
Syria
A subsequent US missile strike against Syria was based on a YouTube clip
vesti7.ru, Vesti.doc talk show @ Pervyi kanal
UK, Russia, US, Syria, France
The West destabilises Armenia to weaken Russia in Syria
politnavigator.net
Armenia, Russia, Syria
Next to Lugar's Laboratory in Tbilisi children with anomalies are born
Asaval-Dasavali on mediamonitoring.ge
US, Georgia
Those who live near the Lugar Laboratory in Tbilisi are under a big risk
Asaval-Dasavali on mediamonitoring.ge
US, Georgia
Lack of coordination with the U.N. Secretariat’s security department led to delay for OPCW inspectors arrival in Douma
TASS - Russian
Russia, Syria
President Poroshenko proposes Crimeans be deprived of Ukrainian citizenship
RT Russia
Russia, Ukraine
No trace of chemical attack in Douma
Balrad
Russia, Syria
Only 51 Moldovans regained Romanian citizenship in 2016
Sputnik Moldova
Romania, Moldova
The West punishes Russia for having chosen Putin as a president again
Vremya pokazhet @Pervyi kanal, 24:39
Russia
The West has announced the expulsion of Russian diplomats to muffle the ‘remarkable victory of Russia’ in the Eastern Ghouta
Vremya pokazhet @Pervyi kanal, 22:23
Russia
The expulsion of Russian diplomats means that the US has declared a New Cold War on Russia
Petr Tolstoy's "Vremya Pokazhet" - YouTube
UK, Russia, US
By continuing to browse the site you are agreeing to our use of cookies.