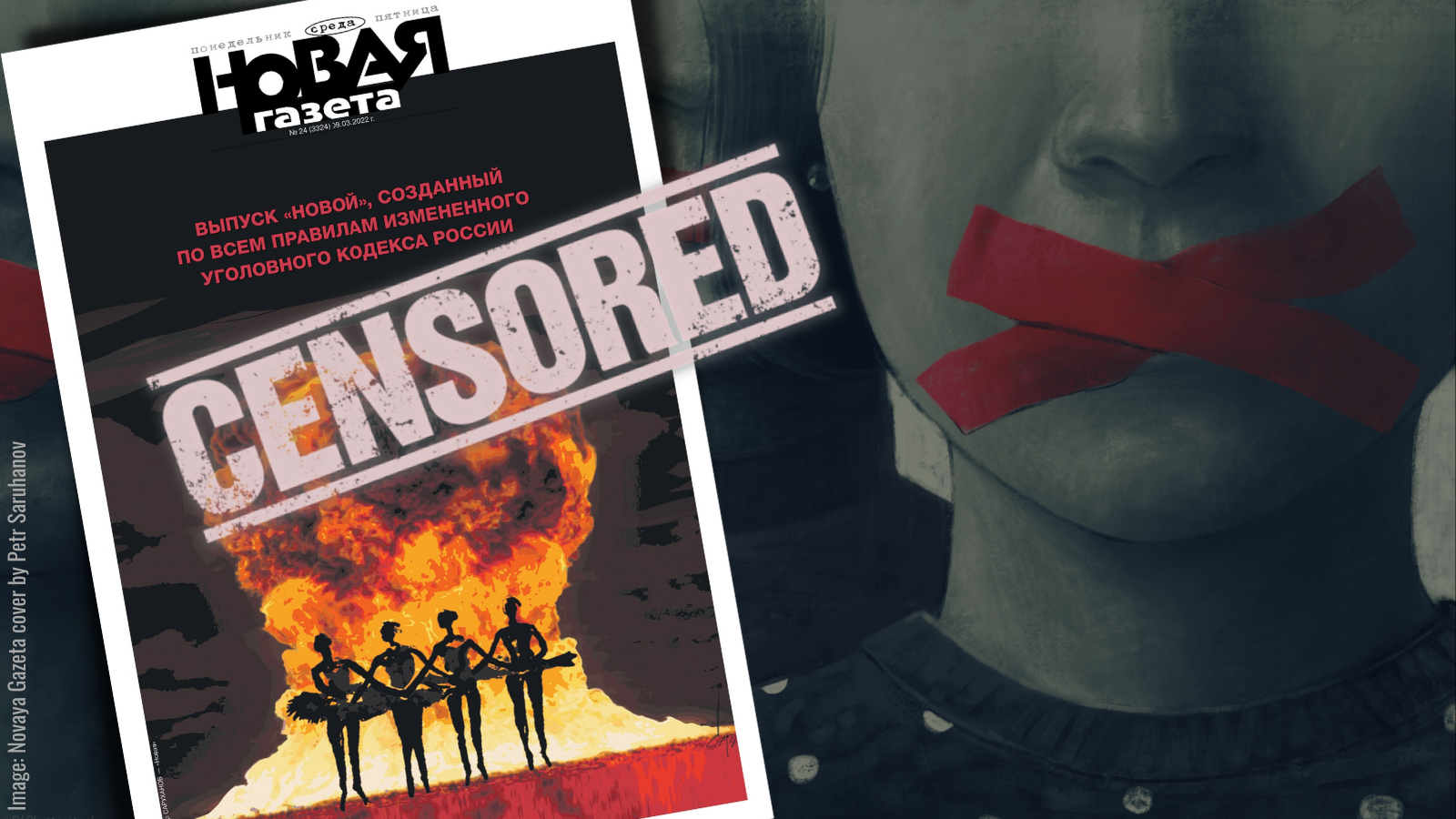 Update 27 April: The Novaya Gazeta team has established and consolidated the on-line news platform “Novaya Gazeta. Europe” as a new entity. It is available via: https://novayagazeta.eu/ and is publishing independent news in Russian and English language. In an article from 20 April “We stay with Europe – Novaya Gazeta. Europe is launching its own website” the new editor-in-chief Kirill Martynov informed about the reasons and the the new media:

“Russia has essentially banned professional journalism. The Russian government has “cancelled” us right when Russian citizens and the whole world need us the most. Factual and independent reporting is in more demand than ever: people want to know the truth about this catastrophic war and the damage it does to Russian society.

On April 7, 2022, Novaya Gazeta. Europe launched a Russian-language news channel on Telegram. Shortly after that, we brought our reporting to Twitter, both in Russian and in English. Today, on April 20, we are launching our website as a fully-fledged European media platform. Here, we will tell the whole truth about Russia and the war against Ukraine, regardless of what the Kremlin thinks about it.

Reporters of Novaya Gazeta. Europe are counting on your support. In a few days, we plan to launch a crowdfunding campaign. We bring Europe to you, regardless of where you are, on both sides of the border that has divided our continent once again.

Novaya Gazeta’s style and characteristics of the critical journalism is preserved in the new media. Well known journalists write articles under their own name. The majority of articles focus on the war in Ukraine as well as all its consequences in Russia. Dmitry Muratov remains in Moscow. The new media brings its contribution to countering Kremlin disinformation and manipulation.

The suspension of Novaya Gazeta due to state media regulator Roskomnadzor’s warning is a new low in the censorship of free media in Russia.

Novaya Gazeta on 28 March received a second warning from the Russian state media regulator Roskomnadzor for its failure to adequately label itself as a “foreign agent”. Novaya Gazeta then informed its readers that it would suspend publication in print and online until the end of the “special operation” in Ukraine. The “special operation in Ukraine” is the euphemism enforced by the Kremlin’s censorship when referring to the war.

What is the background and what does this mean?

A second warning from Roskomnadzor signals an imminent, forced closure. This is in line with the harsh law re-introducing censorship adopted on 4 March and later expanded, as well as arrests for “spreading false information” which have now begun.

Obviously, the real reason for the Russian state to close Novaya Gazeta is its reporting about the war in Ukraine; not a phony labelling issue. An important point of reference is a powerful interview which President Zelenskyy gave to four Russian media, published on 27 March. One of the questions asked by TV Dozhd [Rain] was from Novaya Gazeta’s editor in chief Dmitry Muratov (winner of the 2020 Nobel Peace Prize).

Novaya Gazeta has provided reporting from the frontlines in Ukraine. Not the way the Kremlin wants it, with bias and heavy-handed manipulation, but with news as they appear in the field: about Russian attacks being repelled by Ukrainian troops, about sloppy preparations and lack of morale among Russian frontline units, and about the systematic Russian shelling of civilian targets and humanitarian infrastructure such as water installations etc. in Ukrainian towns.

As the only significant media still operating from inside Russia, Novaya Gazeta has gone to the very limits of the 4 March censorship law in its efforts to report on the war. It has labelled its information edited in accordance with Russian laws and regulations [or, rather, censorship]. Novaya has creatively used visual illustrations such as the Armageddon fireball and the Swan Lake ballet associated with the demise of Soviet leaders. 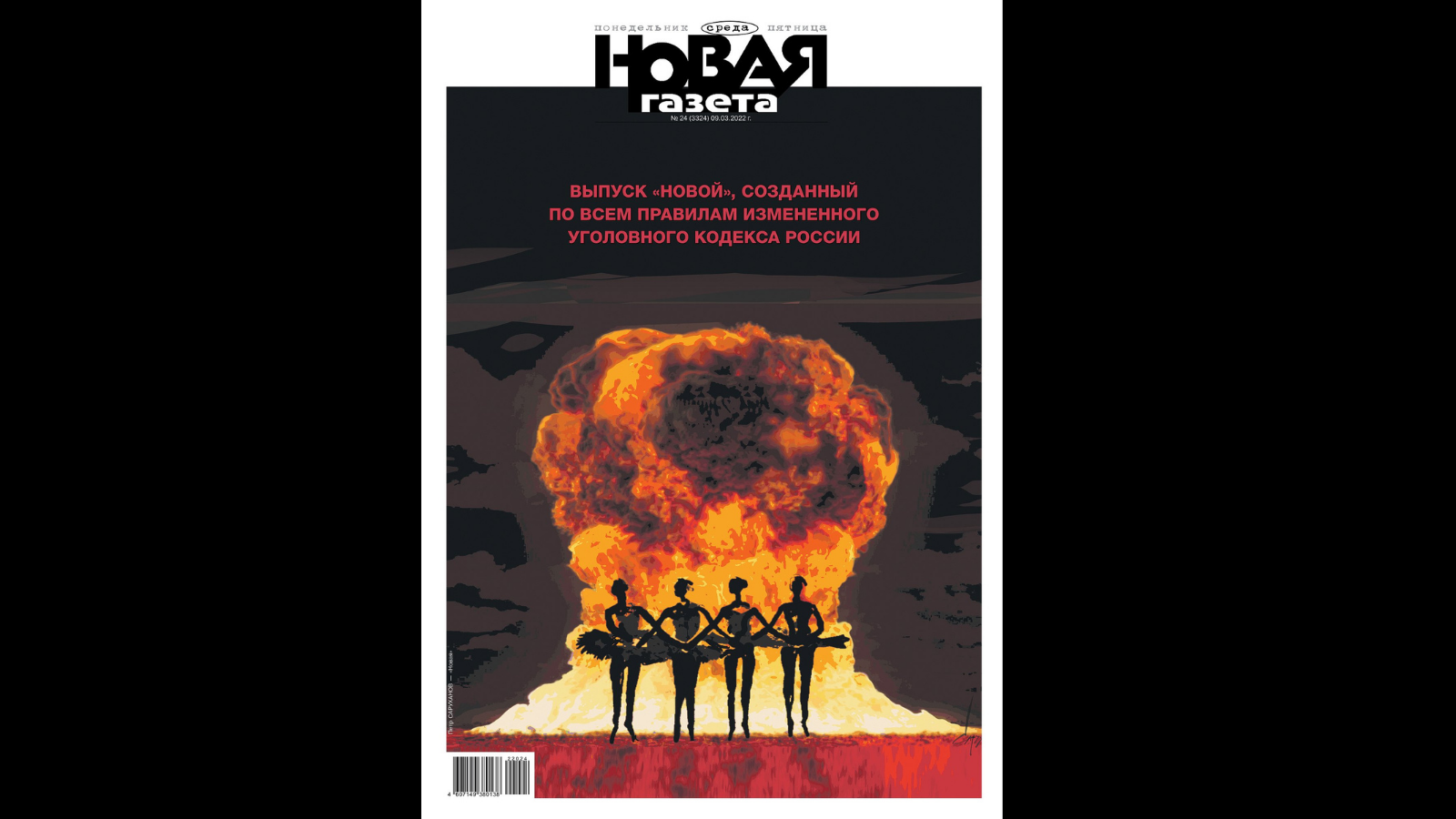 Or the illustration of an article on 27 March on Russia’s evolution from Generation P(utin) to Generation Z [the war sign]: a Titanic-like ship heading towards a gigantic iceberg. 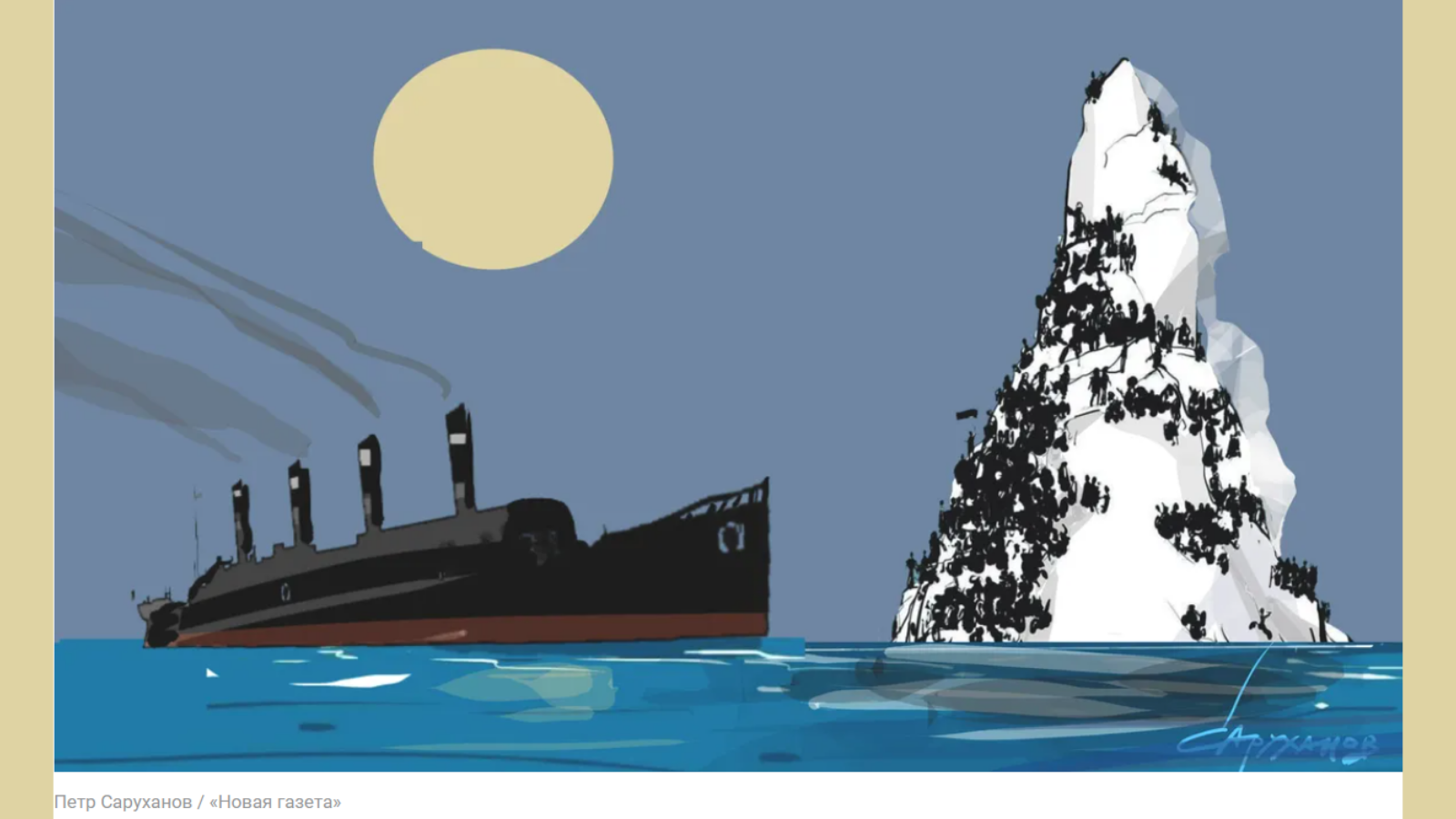 Novaya Gazeta’s suspension is in effect the end of the last free media in Russia (for the time being). The Nobel Peace Prize winner of 2020 has been silenced in Russia.

See the statement by the EU High Representative on the suspension here.

Read also: A Black Day for Media and Free Speech In Russia (Update 8 And 26 March)