A return to medieval times? 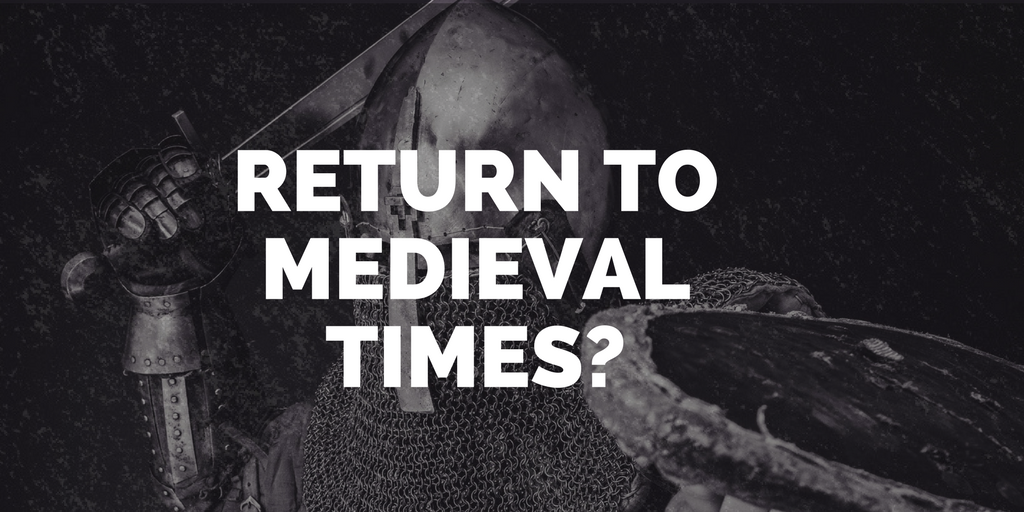 This week, pro-Kremlin disinformation time-travelled to medieval times, suggesting that the West and/or NATO planned to reduce Russia after the fall of the USSR to the size of the historical Grand Duchy of Moscow. For those who can’t quite recall the borders of that Grand Duchy, you can find a map here. Like in any good spy novel, it all supposedly came from secret documents obtained by Russian intelligence services – soon handed over to Sputnik apparently. There was no further information concerning why the West and/or NATO had a plan to divide Russia according to medieval territorial borders, but the curious disinformation was repeated both in Russian and English outlets. Needless to say, the claims were not accompanied with any proof of the existence of such a ‘Grand Duchy plan’.

It was, however, not the only disinformation portraying the West as evil. As we have highlighted before, the West is the favourite enemy in the pro-Kremlin echo chamber. The West was also accused of not being satisfied with the return to a Grand Duchy of Moscow but planning to erase Russia from the map altogether. There were also claims that a war of worlds had begun, as sanctions against Russia were presented as a fight against the Slavic world. There was of course no mention of the fact that EU sanctions as well as US sanctions towards Russia were implemented due to the illegal Russian annexation of a part of Ukraine.

The US was also depicted not only as the enemy of Russia but as the enemy of Europe. A Czech outlet claimed that the US aims to occupy Europe and destroy the continent’s independence. Furthermore, it was stated on Russian state TV that Ukraine is implementing a secret plan designed by the US to conduct a genocide of ethnic Russians in Donbas. The claims of genocide in Eastern Ukraine is a recurring disinformation that has never been proven nor reported by any outlet other than pro-Kremlin propagators. 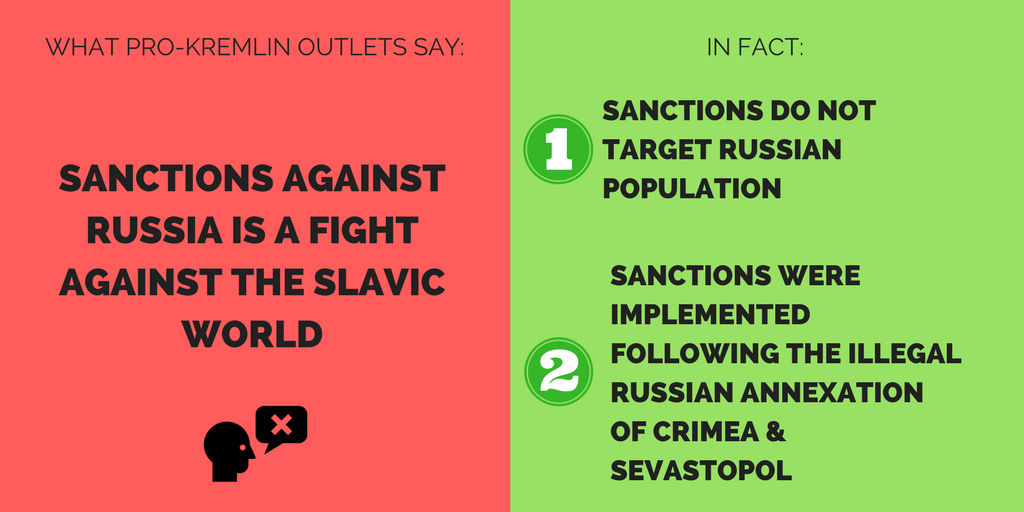 Ukraine in the headlines

The claims of genocide were not the only disinformation about Ukraine this week. As usual, there is an abundance of false claims concerning the country. Apart from the usual allegations; Ukrainian authorities are terrorists and the current President came to power through a coup d’etat, we also saw some less regular pieces of disinformation. Poland was said to be preparing to close the border with Ukraine while the facts are that a pilot project for pedestrian traffic at one border crossing point between Ukraine and Poland will end according to plan in June. In another outlet it was stated that Poland was reluctant to accept Ukrainian travellers and in an especially confusing Sputnik article, it was claimed that Kiev wants France and Germany to pay for rebuilding Donbas. The article is confusing, since the only mention of this is to be found in the headline – an often used tactic by Sputnik, as a way of spreading disinformation and uncertainties without having to substantiate the claims with proof. 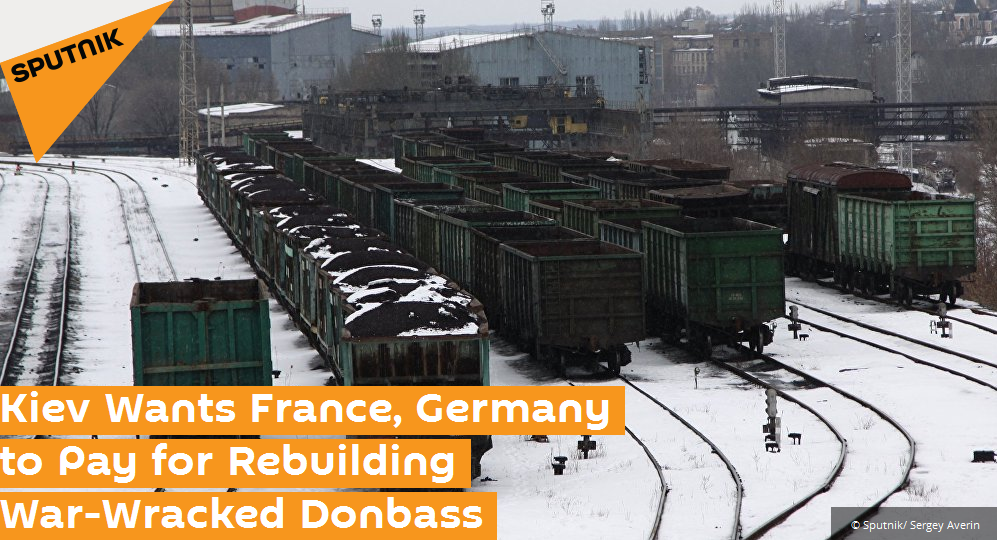 Date
Title
Outlets
Country
In the USA and Europe, children are becoming more stupid
Politikus.ru
US
Kiev wants France and Germany to pay for rebuilding war-wracked...
Sputnik
Ukraine, Germany, France
Oligarchs of the Bilderberg Group made Macron President of France
Blog www.nstarikov.ru
France
NATO and the West planned to cut USSR into pieces...
Svobodnaya Pressa
USSR, Russia
In Syria, the Americans are trying to do all they...
Ren-TV, Voennaya Tayna with Igor Prokopenko
Russia, US, Syria
After the collapse of the USSR, NATO planned to divide...
Sputnik
USSR, Russia
NATO is practicing for a nuclear war against Russia
Sputnik
Russia
The Ukrainian authorities are implementing a secret plan of the...
Vremya pokazhet (38:06, 52:49, 1:24:52)
Russia, Ukraine, US
Petro Poroshenko became president of Ukraine illegally, because presidential elections...
Vremya pokazhet (1:18:39)
Ukraine
Poland wants to close the border with Ukraine
TV Zvezda
Ukraine, Poland
Foreign soldiers have been seen in the city of Popasna...
Miaistok.ru
Ukraine
By implementing anti-Russian sanctions, the West has begun a fight...
Vremya pokazhet (27:22)
Russia
The recent US shoot down of Syrian jet was planned...
Protiproud
US, Syria
The US is attempting to occupy Europe
Nová republika
Czech Republic, US, Germany
NATO fighter jet committed an unprecedented deliberate provocation when it...
www.novarepublika.cz
Russia, Baltic states
An American biological laboratory in Georgia produces hazardous substances and...
Georgia and the World
US, Georgia
At their meeting in the White House, President Poroshenko promised...
Vremya pokazhet (58:08)
Ukraine, US
The US regards Europe as its ‘main enemy’ in the...
Vremya pokazhet (19:55)
US, Poland
Most Ukrainians are not interested in visa-free travel to the...
Ukraina.ru
Ukraine
NATO F-16 tried to provoke the Russian Defense minister's plane,...
Sputnik
Russia
The USA wants to occupy and split up Syria
Nová republika, Zvědavec
US, Syria
The Czech public TV and radio are massively influenced by the Brussels...
Sputnik, Nová republika
Czech Republic, Russia
The Czech Television newsroom only gives space to descendants of...
Nová republika, Parlamentní listy, Právě dnes
Czech Republic, Russia
The West has designed a strategic plan with the aim...
Vecher s Vladimirom Solovievym (40:49)
Russia, US
The US Air Forces destroyed a Syrian military airplane to...
Vremya pokazhet (21:59)
Russia, US, Syria
The authorities in Ukraine are bandits and terrorists, much like...
Voskresnyi vecher s Vladimirom Solovyovym (2:30:27)
Ukraine
Poroshenko deprives Donbas residents from traveling to EU without visas,...
Vesti
Ukraine
Dmitry Kiselyov has never expressed support for the directing of...
TASS
Russia, Ukraine
The number of people who died as a result of...
Politicano
USSR, Ukraine
After the introduction of visa-free travel, Poland was reluctant to...
RIA Novosti
Ukraine, Poland
By continuing to browse the site you are agreeing to our use of cookies.