“All quiet on the Western Front”…

Erich Maria Remarque’s 1929 anti-war novel Im Westen nichts Neues – translated ‘Nothing new in the West’ and known to English-language audiences under the title, ‘All quiet on the Western Front’ – is a symbol of the endless and meaningless suffering associated with World War I. Several film versions have been made over decades, including a new 2022 interpretation. The title also expresses stagnation with no solution in sight. War continues every day. Attrition grinds away lives and resources.

As winter is approaching and Russia’s war against Ukraine enters new stages of attrition of Ukraine’s civilian infrastructure, the Kremlin promotes a bunker-like atmosphere with often mutually exclusive narratives. Classic claims popped again during the last two weeks that Russia is at war with the entire West, not with Ukraine. At the same time, President Zelenskyy is branded a Nazi Führer, Ukraine should never have existed, and Ukraine is Russian territory.

There is a contradiction in the claim that, in essence, Ukrainians understand they are ‘brothers with Russians’, while also stating that everybody is mobilised against Russia and now Kyiv is trying to mobilise women and disabled people because there is no one left to be mobilised. See our detailed account of these well-known tropes which are playing on repeat and were used to justify the full-scale aggression in the first place.

Destroy as much as you can

Disinformation has also been intense and contradictory regarding the degree of Russian destruction of Ukraine’s civil infrastructure. Outlets and commentators promote Russia missile and drone attacks broadly, even boasting about them as something to be proud of because they successfully destroy Ukraine’s fighting spirit. Yet, at the same time, commentators also suggest that Ukraine is exaggerating the damage ‘to get more financial support and demonise Russia’.

US plan to split up Russia!

Russian state TV weekly promotes the idea that the US is and will remain the prime adversary of Russia. In his daily political talk show, ‘The Big Game’ – Большая игра – close Kremlin ally and parliament member Vyacheslav Nikonov devoted considerable time in the past week to convincing the audience that a sinister US-led plan aims to split the Russian Federation into small states fighting each other and easy to exploit for resources. 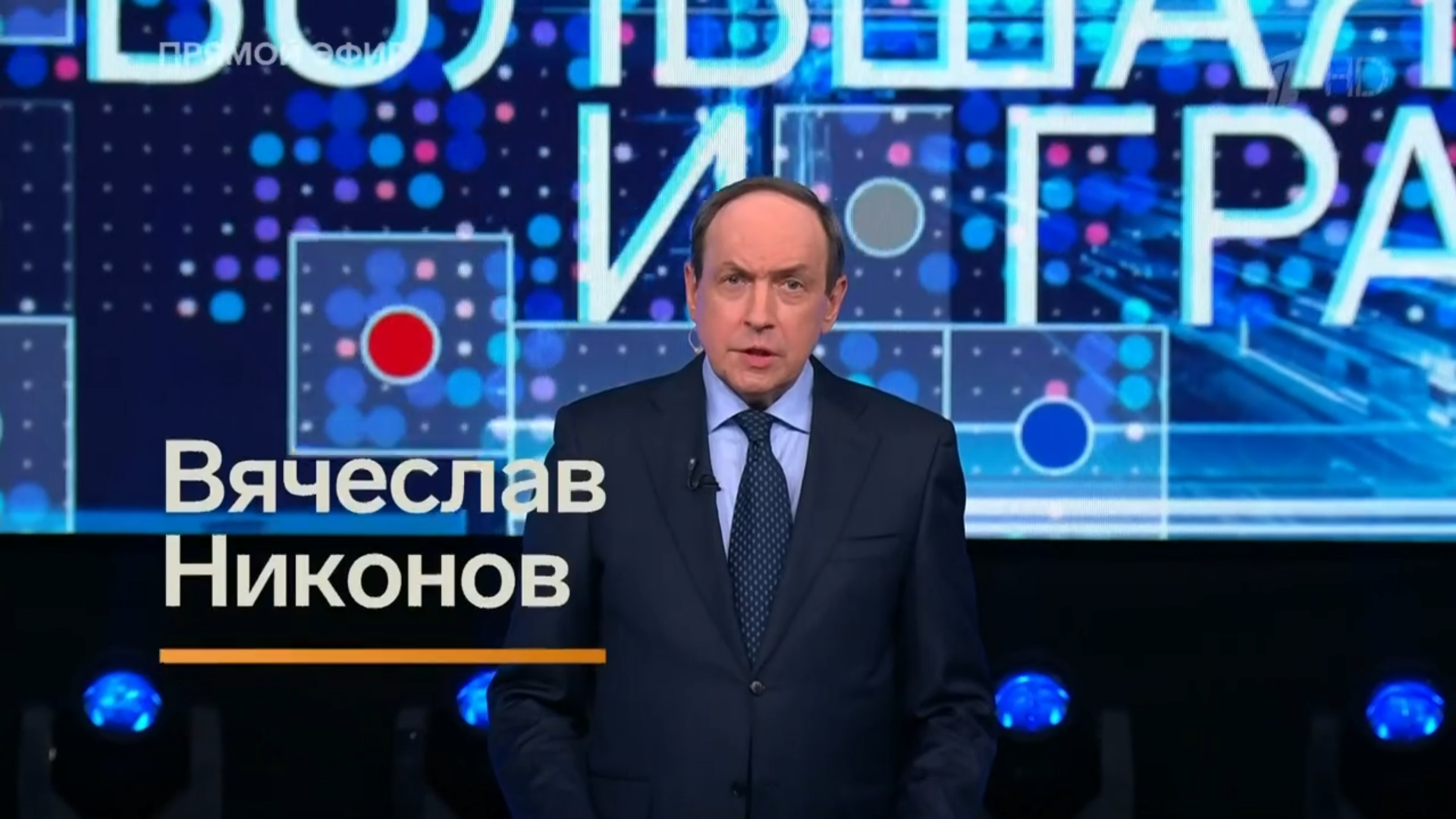 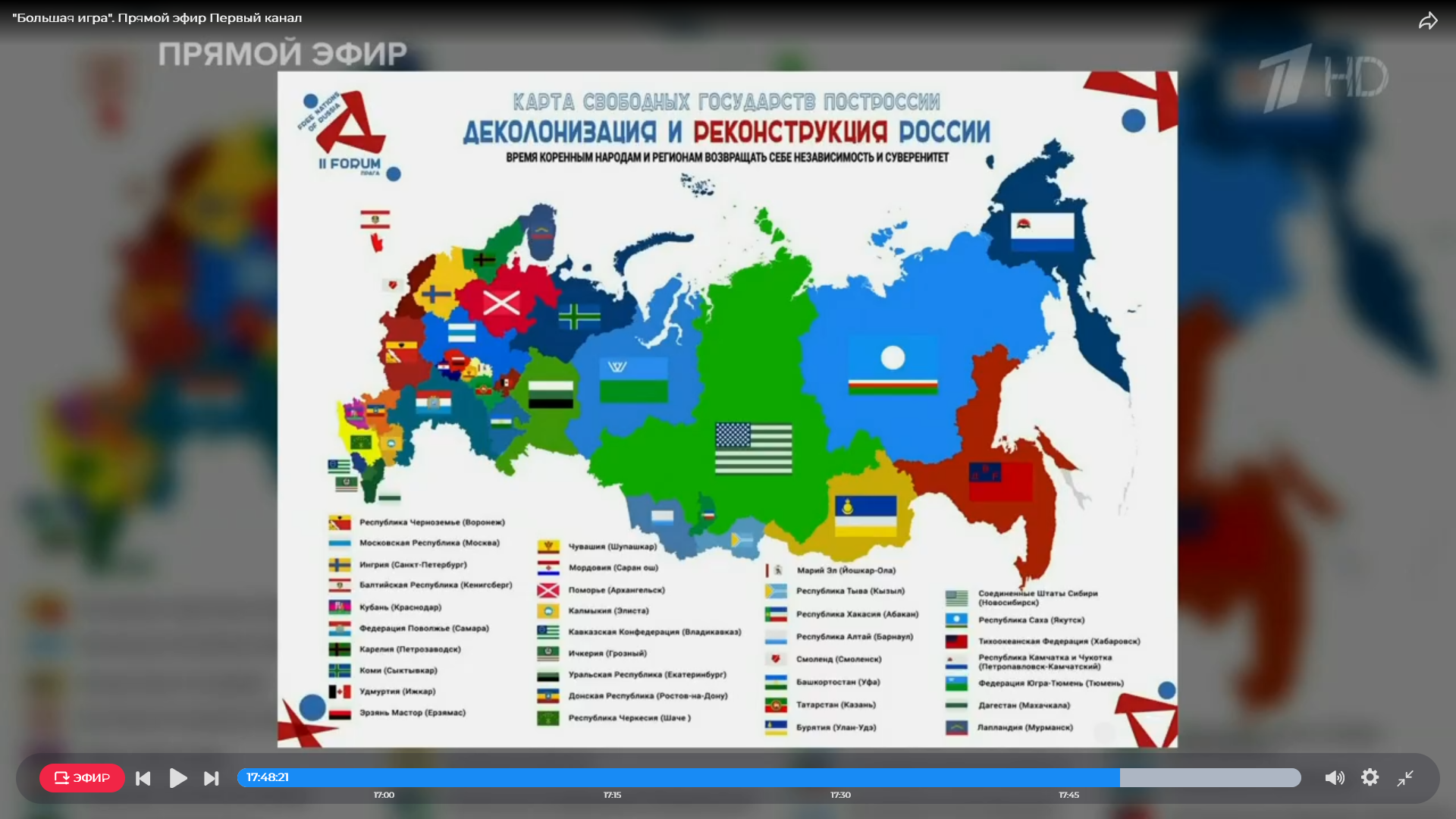 The dream of US-facilitated (or -ordered) negotiations gained traction across the Kremlin ecosystem during the US midterm elections. 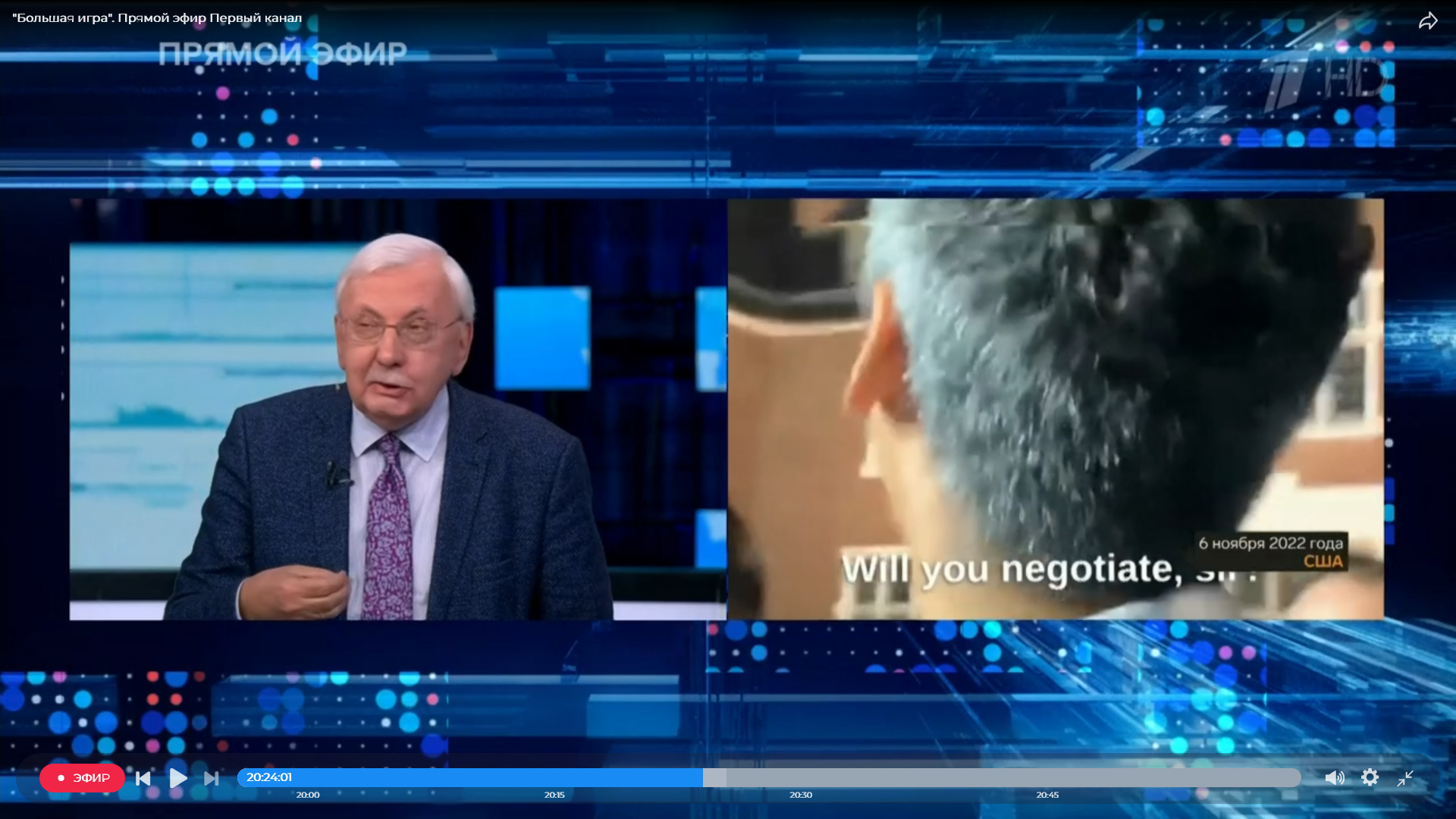 This comes as Russian forces are under pressure in Ukraine. Russian mobilisation has not produced convincing, offensive combat power and Kherson civilians are reportedly forcibly transferred to other occupied territories of Ukraine or deported to Russia.

Pro-Russian commentators envision negotiations taking place in a classic great-power setting, but with a twist: ‘We can negotiate about what is yours. What is mine stays mine’, as expressed by Russian Federation Council speaker Valentina Matvienko. She calls for using the upcoming G20 summit in Indonesia for talks ‘about ending the military action but on Russia’s terms’ while the illegally annexed regions cannot be the subject of negotiation.

High-profile firebrand and Russian state TV host Olga Skabeeva makes her own interpretation of US policies and expresses the wish that US assistance to Ukraine could stop altogether after the midterm elections and the US could pressure Kyiv to attend peace talks. Other Russian Kremlin-affiliated experts like Fyodor Lukyanov dampen these expectations, believing that US authorities, even after the midterms, will still approve significant military aid and be guided by a superpower’s vision of standing up against Russia.

Interference in US elections: yes, of course!

Evgeny Prigozhin, evermore a roguish Putin ally, prides himself in his skills at manipulation. He stated that of course he (and Kremlin troll factories) interfered in earlier US elections and he is doing it now and intends to continue to do so in the future. Prigozhin is close to Putin. Having lucrative service contracts with the Russian army, troll factories, and his Wagner group of mercenaries, he decided to conduct mobilisation with public billboards, recruiting in Russian prisons over the summer and opening a recruitment office in St.Petersburg on 28 October. He is an ‘icon of action’ in the public sphere, the rogue face of Russian macho culture and everything ‘anti-West’. Note the deviation from the polished Kremlin spokesperson Dmitry Peskov who has constantly denied Russian election interference using a noble British-English accent.

Other stories on EUvsDisinfo’s radar this week:

This disinformation narrative goes together with two other horror stories:

Both allegations are pure fabrications intended to deflect attention away from Russia’s invasion and criminal actions in Ukraine. Secondly, they exist to create the illusion that Kyiv and the West are constantly widening the scope of war with prohibited, scary bioweapons causing mass destruction.

In the end, there is only one thing causing mass suffering and destruction (and proud of it) in Ukraine: Russia’s well-known military aggression. There is truly nothing new on the Western Front.