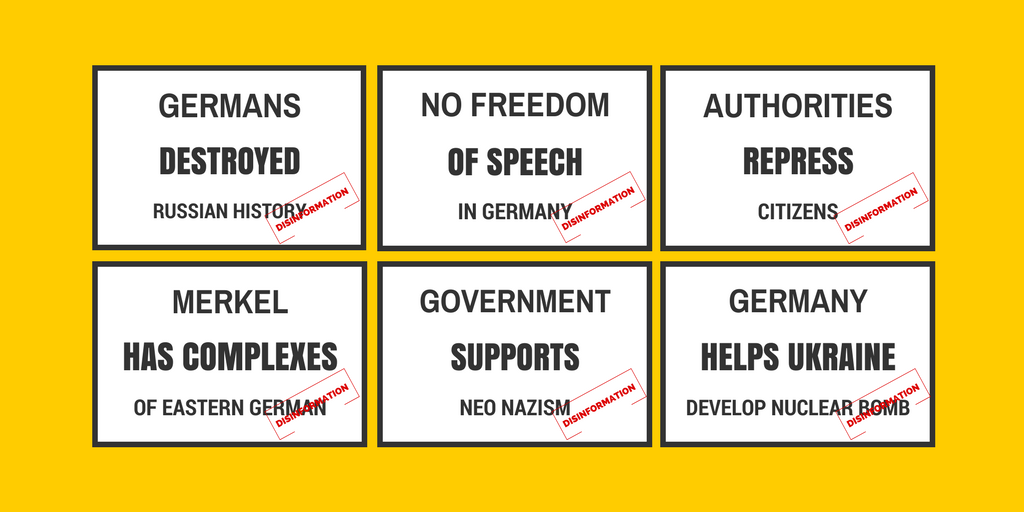 If you watch Russian state-controlled TV, you will hear about a country called “Germany”, but it’s rather unlike the Germany you may know. Here is what we found out about this alternative Germany on Russia’s four big state-controlled and state-loyal TV channels:

“Alternative Germany” also has a past with some elements that were little-known before:

The Germans destroyed Russian history, as they exchanged Russian Tsar Peter the Great for a different person in the late 17th century. Read the disinformation article.
The occupation regime, which was introduced by the victorious countries in Germany after World War II, has not yet been cancelled. Watch the original (at 19:13)
Since 1945, Germany has been a defeated state with no sovereignty. Watch the original (at 15:22)

All the examples above were reported in the Disinformation Review over the past 18 months as disinformation without a basis in facts.

Among the many countries whose reputation is systematically challenged with false information in pro-Kremlin media, Germany stands out as a particularly popular target. In order to create this distorted image, Russian state-controlled outlets have had to do two things: Abandon the fundamental idea that reporting facts is a professional necessity in journalism; and become subject to guidelines issued by the Russian authorities. Most of these examples above are taken from talk shows, which are subject to the same guidelines from the Kremlin. Debate programmes on Russian state-loyal television are thus carefully organised as to let certain opinions be voiced. A result of the “reporting” and the talk shows about Germany shown above is a certain perception of Germany among Russian-speaking audiences. However, not all Russian-speaking communities are based in Russia. In fact, some of them live in Germany itself.

The largest linguistically defined immigrant group in Germany is the almost 3 million Russian speakers, who outnumber e.g. the country’s Turkish community. All the four big Russian state-controlled and state-loyal TV-channels – Pervy Kanal, Rossiya-1, REN-TV and NTV are available in German cable TV packages with bespoke advertising blocks for the German market, but with no toning down of the political messaging and fake reports like those above. This spreading of Russian state-controlled narratives into German society is definitely not helping Germany’s Russian-speakers get better informed; on the contrary, it increases the risk that they are disinformed.