Always Blame the West! - And Six Other Disinformation Trends 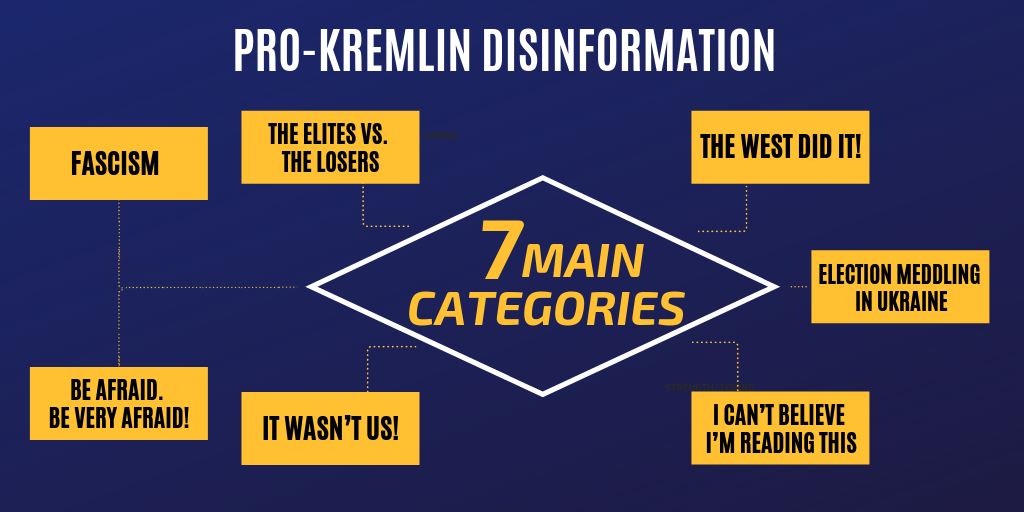 This week, the pro-Kremlin disinformation machine churned out enough material for us to register almost 50 cases which we’ve divided into seven categories showing how certain narrative templates are used and reused for different stories and adapted to different audiences. These categories range from the usual – “The West did it!” and “It wasn’t us!” – to the outrageous “I can’t believe I’m reading this”, which contains lies so blatant that even the most hard-boiled disinformation aficionado might need to take a seat.

The Elites vs. the Losers

The narratives in this category seek to instil an inferiority complex in the reader, both on a personal and national level, and to drum up opposition to the political establishment. One case for example suggests that voting in the European Parliament elections simply gives a few politicians the opportunity for a cushy life in Brussels, but brings no benefits to average Latvians. This is a popular narrative around election time, used by pro-Kremlin actors to discourage voter turnout and to increase the prospects of populist, anti-establishment parties.

Ah, fascism – one of the Kremlin’s go-to refrains for delegitimising anyone or anything it doesn’t like. Europe is fencing itself off from Russia with a wall of fascism, hate, and Russophobia! In Latvia, Nazis are in power, so there’s no point in voting! More than seventy years after the end of World War II, you might think that Russia has moved beyond such outdated tropes. But that would be asking too much.

Be afraid. Be very afraid! 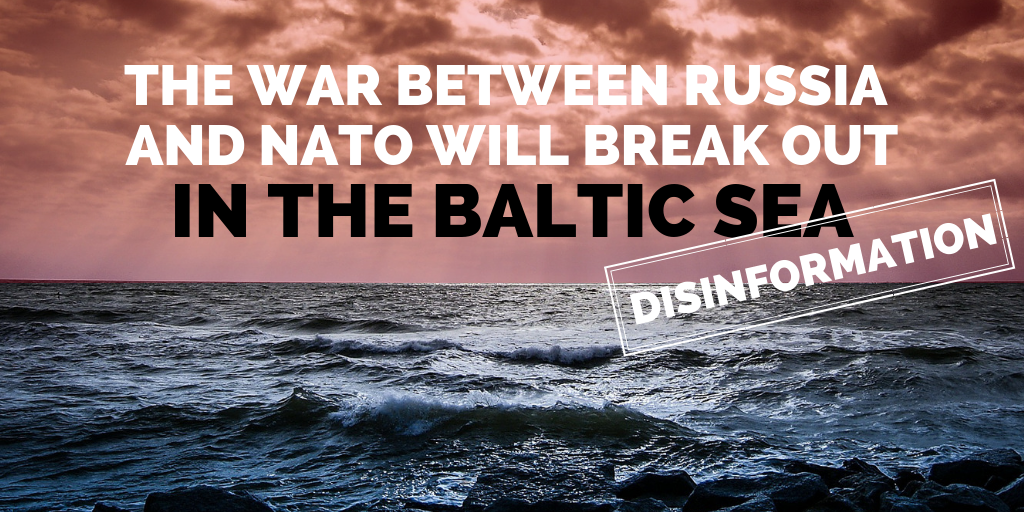 Like accusations of fascism, fearmongering is another favoured pro-Kremlin narrative strategy. This week, the pro-Kremlin media cited a US report to argue that the conflict between Russia and NATO is likely to lead to a military conflict in the Baltic Sea. Conveniently, the article failed to mention the report’s actual conclusion – that “a major conflict between NATO and Russia remains unlikely”.

Stoking fear and perceptions of insecurity is a particularly common tactic when it comes to Ukraine – currently the Kremlin’s chief obsession. Apparently, ahead of the second round of the Ukrainian presidential election, Poroshenko is planning to organise new provocations in Donbas. As the EUvsDisinfo database has tracked, disinformation about Ukraine’s alleged aggression and agitation has been at the core of the Kremlin’s narrative strategy from the moment Russia initiated its war against Ukraine. But at the same time, glaring inconsistencies remain – after all, how is it possible that a failing country with a military verging on collapse could pose a real security threat to Russia?! The Kremlin can’t have it both ways, no matter how desperately it wants to.

Deflection is another popular pro-Kremlin disinfo tactic. It includes well-known hits like “Kyiv downed MH17, not Russia!“, because Ukraine failed to close its airspace over the rebel-held areas of Donbas. In fact, the BUK missile system responsible for the tragedy originated in a Russian army unit and was taken back to Russia afterwards. Other hoax stories deflecting blame from Russia claim that the West is responsible for warlike provocations in the Black Sea, and that the Ukrainian government is responsible for the war with Russia, not the other way around.

This category also includes great examples of obfuscation: for example, that it’s not clear who shot a protesting crowd in Lithuania in 1991, but it was probably the Lithuanians themselves, or a third party. This narrative likely stems from a recent court decision in Lithuania which found that the former Soviet defence minister and 60 officers were responsible for this crime.

“It wasn’t us!” also comes up regarding Russian meddling in the French elections. Yet again, according to pro-Kremlin media, there is no evidence that Russia was involved, and thus confusion persists. In reality, investigations by The Insider and Mediapart.fr established that GRU-linked hackers stole the emails from Emmanuel Macron’s campaign team and that later, pro-Kremlin media spread news about the leaks.

The West did it!

Related to the category above, “The West did it!” is all about Russia’s favourite scapegoat. You’ve heard it before: it’s the West, not Russia, which meddles in other countries and is constantly trying to destabilise them – just look at Belarus, Ukraine, Maidan, and Venezuela. And don’t forget the role of NATO! 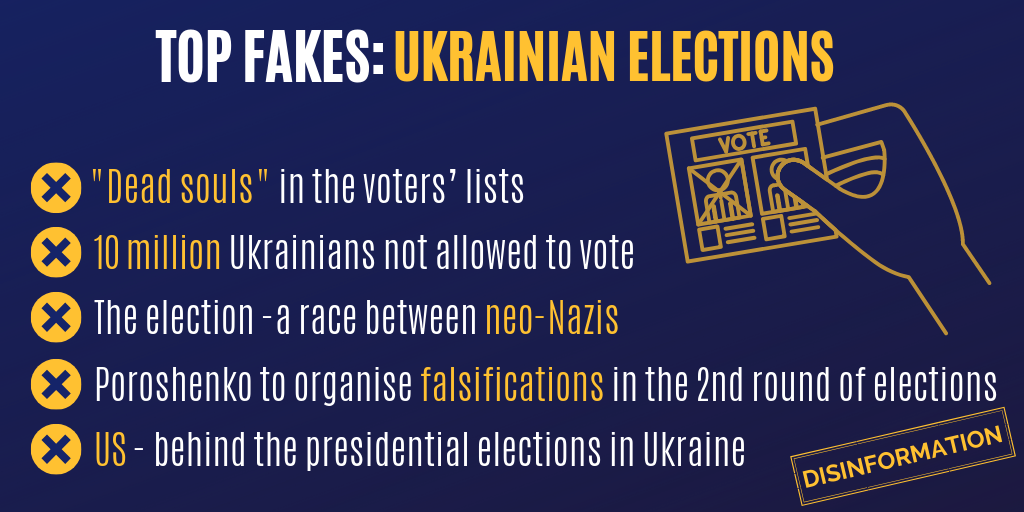 This week, we saw ten stories about alleged election meddling in Ukraine, including: organised falsifications, voting at gunpoint, Donbas residents being refused the right to vote, campaigning with dirty money, and electoral fraud. What’s the overarching theme? That Ukraine is a failed state and the elections are illegitimate. Cui bono? The Kremlin. As usual.

I can’t believe I’m reading this

And finally, the most entertaining specimen of the lot! We’re told that Brazil will gain NATO membership so the US can use it as a springboard for military intervention in Venezuela. Fact-check: the pro-Kremlin media neglected to mention that Brazil’s NATO membership would require all NATO members to agree to amend Article 10 of the alliance’s 1949 founding treaty, which states that only European countries can join, besides Canada and the United States. The prospect of Brazilian membership? Beyond unlikely.

And then there are the standard eyeroll-inducing fairytales: that Russia’s aggression against Ukraine is a myth, that there was no “invasion” of Crimea, and that Crimea in fact rejoined Russia after a legally valid referendum.

A memo to the Kremlin: no matter how many times you repeat a lie, it doesn’t become true.

Date
Title
Outlets
Country
Lithuanian charges against the soviet soldiers in the January 13th case are trumped up
Itogi Nedeli @ NTV (37:28 - 44:00)
Lithuania
The election in Ukraine is a race between neo-Nazis
Strategic Culture Foundation
Ukraine, US
Ahead of the second round of the Ukrainian election, Poroshenko will organise new provocations in Donbas
60 minut @ Rossiya 1 (13:30 - 13:50)
Ukraine
From the American point of view Ukraine is a Western part of Russia
Vremya Pokhazhet @ Pervyi Kanal (06:55 - 7.26)
Ukraine, US
America is behind the presidential elections in Ukraine
Vremya Pokazhet @ Pervyi Kanal (5:04 - 5:46)
Ukraine, US
Poroshenko will organise a lot of falsifications in the second round of the presidential elections
Vremya Pokazhet @ Pervyi Kanal (34:15 - 35:36)
Ukraine
Ukrainians voted at gunpoint and accompanied by special forces
NTV.ru, Politnavigator, URA-inform
Ukraine
Main reason for MH17 crash is Ukraine's failure to close airspace
Sputnik News
Russia, Ukraine
Kyiv prevented Donbas residents from voting in the elections
Channel One TV, Tolstoy (05:40), News on Channel One
Ukraine
It is a myth that Russia invaded and occupied Crimea
RT Deutsch
Ukraine
Transcarpathia has trouble with Ukrainian government, like the East of Ukraine
RT France, Youtube@ (02:00)
Hungary, Russia, Ukraine
10 million Ukrainians are not allowed to vote in the presidential elections in Ukraine
Tsargrad
Ukraine
Voting in the EP elections will bring no benefits to the Latvian people
Sputnik Latvia
Latvia
Russia is accused of election meddling in France without any evidence
RT France time 02:25
Russia, France
The war between Russia and NATO will break out in the Baltic Sea
Sputnik Polska
Russia, Baltic states
Eurozone enables larger states to exploit smaller ones
Sputnik Polska
Slovakia, Latvia, Estonia, Lithuania, Germany, Poland, France
Ukrainian elections have to be recognised as illegitimate
RT Russian
Ukraine
Western warlike provocations in the Black Sea
Sputnik Deutschland
Russia, US
France and Belgium to stage chemical attack in Syria
RT (rt.com), RT France, Sputnik French, Sputnik Spanish, RT Russian, Sputnik Deutschland
Russia, Syria, Belgium, France
The United States and the EU want to isolate Russia
Sputnik Deutschland
Russia, US
"Dead souls" in the lists - a frequent occurrence in Ukrainian presidential elections
Ukraina
Ukraine
The West finances Belarusian opposition and NGOs to disrupt Belarus-Russia relations
RuBaltic
Russia, Ukraine, Baltic states, Belarus, US, Germany, Poland
The West attempted to organise a revolution in Belarus using Ukrainian weapons
RuBaltic
Ukraine, Belarus
Russia saved Belarus from Western bombing like in Yugoslavia
RuBaltic
Yugoslavia, Russia, Lithuania, Belarus, US
Election fraud is inevitable during the Ukrainian presidential elections
RT Deutsch
Ukraine
US bans travel to Crimea to prevent its recognition
Sputnik News
Russia, Ukraine, US
The members of Ukraine's Central Election Commission are Poroshenko's people
RT Russian
Ukraine
The US wants Brazil to join NATO to use it as a base for an intervention in Venezuela
Sputnik Spanish
Brazil, Venezuela, US
NATO is aiming to break Russia down
Vremya Pokazhet (00:16:00) @ Channel One TV
Russia
The US prevents refugees from leaving al-Rukban camp in Syria
Vremya (24:06) @ Channel One TV
Russia, US, Syria
The NATO bombing of Yugoslavia in 1999 caused around 2,500 deaths
Sputnik Italia
Yugoslavia, Serbia
Euromaidan was a coup d’état praised by the European Union
Sputnik Italia
Ukraine
No elections are scheduled in the Donbas
Sputnik Italia 1tv Russia Sputnik Moldova Sputniknews Russia Tsargrad.tv Ria.ru Regnum.ru
Ukraine
Syrian refugees trapped in US-occupied Rukban camp
RT (rt.com)
Russia, US, Syria
Russia has not sent observers to the Ukrainian elections because of safety concerns
RT Russian
Russia, Ukraine
Ukrainians do not want to serve in the Armed Forces of Ukraine
Ukraina.ru
Ukraine
Ukrainian elections are going to be invalid
60 Minut @ Rossiya 1, time 4:39
Ukraine
US and British instructors teach Ukrainians to carry out terror acts
RT Deutsch
UK, Ukraine, US
The West aims to force Belarus to sever ties with Russia
Rubaltic Teleskop
Russia, Belarus
The current Ukrainian government has started a war
RT Deutsch
Russia, Ukraine
There was a coup d’état in Ukraine
RT Deutsch
Ukraine
Ukraine President Petro Poroshenko was the US appointee
Vremya Pokazhet @ Pervyi Kanal (35.00 - 35.33)
Russia, Ukraine, US
Litvinenko and Skripals cases were not brought to court
Sputnik Belarus
Italy, UK, Russia
Venezuela blackout caused by a US attack
Vremya @ Pervyi Kanal (12:43 - 13:46).
Venezuela
There is no point in voting in the European elections in Latvia because Nazis are already in power
Sputnik Latvia
Latvia
Russian war of aggression against Ukraine in 2014 a myth
RT Deutsch
Russia, Ukraine
EU countries fence themselves off from Russia, with a wall of fascism
Harkov
Russia, Ukraine
EU suffers from its own sanctions more than Russia
Sputnik French, Sputnik Deutsch, Sputnik Spanish
Russia, US
The West does not call the New Zealand mosque attacks terrorism
Sputnik Azerbaijan
New Zealand
By continuing to browse the site you are agreeing to our use of cookies.