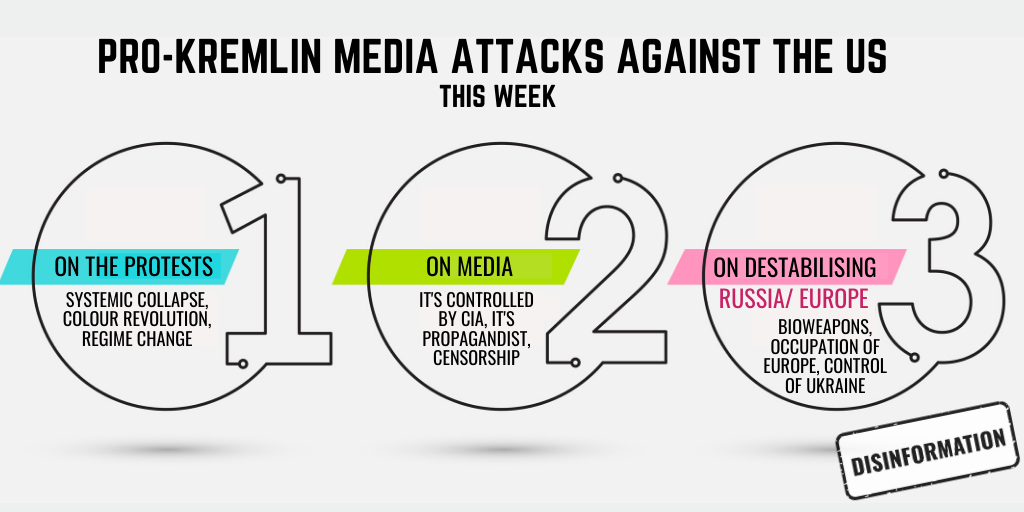 This week, the pro-Kremlin media’s focus on the US shifted from disinformation about the racial injustice protests to fabricated accusations of other American misdeeds around the world.

With the US caught firmly in the global spotlight for the ongoing racial injustice protests sweeping the nation, pro-Kremlin media outlets are cynically using the opportunity to remind audiences about their favourite anti-American disinformation narratives. One of the first principles of disinformation is to latch on to topics and themes that audiences are already primed to accept, thus creating the illusion that the disinformation is grounded in a deeper, more immanent truth or that it is favoured by public opinion. Groupthink, after all, is motivated by power social incentives for in-group belonging.

It is therefore unsurprising that the pro-Kremlin media would choose the present moment to fixate upon the alleged misdeeds and failures of the US, attempting to exacerbate perceptions about the different varieties of America’s “evil” around the world – and of course, in the same breath, to distract from the Kremlin’s own wrongdoings. (Moscow’s illegal annexation of Crimea? Nope – that was a “legal reunification”. The Skripal poisoning by confirmed Russian GRU agents? A “dubious espionage scandal” in which no one apparently knows what happened. Russia’s 2015 hacking of the German Bundestag? No evidence!)

Let’s take a brief tour through this week’s attacks against the US. 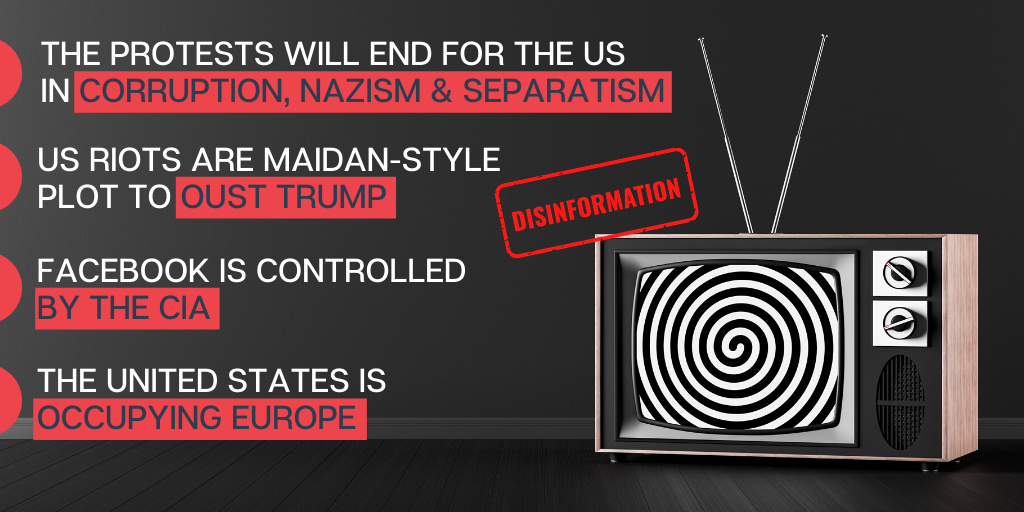 These cases were mostly a reiteration of last week’s. American society is experiencing a “systemic collapse”, which has been underway for a long time but now made obvious thanks to the demonstrations. Pre-deliveries of bricks for use as “weapons of destruction” are taking place across US cities. The protests will end for the US just as Euromaidan did for Ukraine: in corruption, Nazism, and separatism. After all, they are no more than a “colour revolution” of the same sort that the US has supported around the world – only this time promoted by the Democratic Party, Bill Gates, and George Soros. Washington is finally getting a taste of its own medicine – an attempt at regime change to oust President Trump!

Facebook’s decision to label state-sponsored media outlets ahead of the 2020 US presidential election predictably drew the ire of the pro-Kremlin media. The decision was derided as an “anachronistic propaganda tool”, followed by accusations of censorship and Facebook being controlled by the CIA. Ironically, at the same time, Radio Liberty and Voice of America also faced pro-Kremlin disinformation attacks, accused of being “pathetic propagandists” and having nothing at all to do with media.

On destabilising Russia, its neighbours, and Europe…

This is arguably the pro-Kremlin media’s favourite line of attack against the US: Washington is an agent of malign influence all over the world, provoking tensions between Russia and its neighbours, occupying Europe, financing protests in Hong Kong in order to destabilise China, and so on. A recurring theme is alleged US funding of biological laboratories in Eastern Europe – a source of leaked viruses and secret experiments. For example, NewsFront tells us that the Pentagon is supposedly carrying out experiments in Ukraine that it does not dare perform on US soil due to the extreme threat level. Moreover, US biolabs in Ukraine threaten Russia because US experts there are collecting dangerous disease strains. The Lugar Lab in Georgia (a particularly frequent target of pro-Kremlin disinformation) is developing bioweapons to target the South Ossetian population.

Meanwhile, the omnipotent US is feeding the imperialistic ambitions of Poland, Austria, and Hungary, and simultaneously controlling Ukraine through the pretense of fighting corruption. The global deep state (which presumably involves the US as well as other powerful, evil elites) has turned Eastern Europe into a territory of “plunder and devastation”. But it is Russia that is always at the heart of America’s supposedly malevolent intentions: from disingenuously promising Gorbachev that NATO wouldn’t expand eastward, to demonising Russia and Putin, to sending jihadists to Russia in order to destabilise the country. Egocentric “Russophobia” is where the pro-Kremlin disinformation machine always ends up, regular as clockwork. 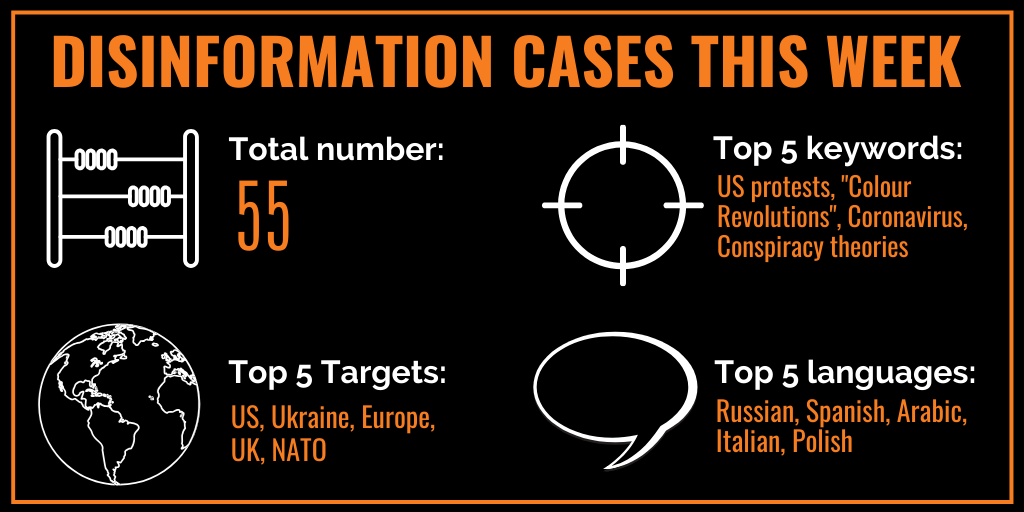 Date
Title
Outlets
Country
Biased, politicised MH17 investigation ignores Moscow-supplied radar data
Sputnik News English
Malaysia, Russia, Ukraine, The Netherlands
George Soros funds far-left Democrat organisation aiming to oust Trump
RT English
US
The US is suffering from a colour revolution similar to those it used to support
Panorama @ RT Arabic, Khabar Masr, New Hub, Khabaralyoum, Sahafaty
US
US riots are Maidan-style plot to oust Trump
RT
Ukraine, US
American officials repeatedly promised Gorbachev that NATO would not expand eastward after the reunification of Germany
Sputnik Italia
Russia, US
Information site Bellingcat has been convicted for disinformation
News Front - French, News Front - Spanish, News Front - English
The Netherlands
Nobody knows what happened in Salisbury two years ago
Rossia 24 - YouTube
UK, Russia
Radio Liberty is forbidden to broadcast in the United States, because they are a propaganda channel
Polnyi contact @ Radio Vesti
Russia, US
IMF policy in Ukraine aims to turn Ukrainians into cheap labour force
nahnews.org
Ukraine
The EU continues to support a colour revolution in Belarus
EU, Ukraine, Belarus
Due to Ukrainian provocation, a man died at a checkpoint with the DNR
News Front - Russian, rusvesna.su
Ukraine
Bill Gates pays compensations to people mutilated as a result of the vaccines
Alia (print only)
US
US instructed the Lugar Lab to create biological weapon to target South Ossetian population
Sputnik South-Ossetia
US, Georgia
5G technology can have adverse effects on birds
Asaval-Dasavali (print only)
Georgia
Ukraine refuses to observe a truce in Donbas
eadaily.com
Ukraine
After Russia’s expulsion G7 lost its relevance
Sputnik Spain
Russia
Russia was expelled from G8 for no real reason
Sputnik Spain
Russia, Ukraine, France
Washington uses the topic of fighting corruption as an instrument to control Ukraine
RT Russia
Ukraine, US
The systemic collapse of American society is now obvious
Geopolitica.ru - Italian
US
The team that investigated the MH17 crash should be arrested for falsifying numerous evidences
News Front - Spanish
Russia, Ukraine, The Netherlands
The Pentagon carries out in Ukraine the experiments that didn’t dare to do in US soil
News Front - Spanish, News Front - Spanish
Ukraine, US, Georgia
The US government intends to destabilise the Russian Federation by sending jihadists to Russia
Geopolitica.ru - Italian, Geopolitica.ru - Italian, Geopolitica.ru - Italian, Geopolitica.ru - Italian, paulcraigroberts.com
Russia, US
The masters of the colour revolution in Armenia are only interested in creating problems for Russia
Iravunk.com
Armenia, Russia
Red Army monuments and cemeteries are methodologically destroyed in Poland
Sputnik Poland
Russia, US, Poland
The United States is occupying Europe
Sputnik Poland
EU, US, Poland
NATO has taken a path of aggression in recent years
Sputnik Germany
Russia, US
The global deep state turned Eastern Europe in a territory of plunder and devastation
Sputnik Poland
EU
Crimea's re-unification with Russia was legal
Sputnik Greece
Russia, Ukraine, US
In February 2014, a violent coup d'état took place in Kyiv
RT Germany
Ukraine
Clashes in Hong Kong are financed and organised by the US in order to destabilise China
Geopolitica.ru - Italian, Geopolitica.ru - Italian, Geopolitica.ru - Italian, Geopolitica.ru - Italian, paulcraigroberts.com
China, Hong Kong, Russia, US
Mark Zuckerberg introduced his own form of censorship against Sputnik, Xinhua and Press TV
Sputnik Poland
China, Iran, Russia, US
CIA-influenced Facebook introduces the mechanism of preventive censorship of Sputnik
Sputnik Poland
Russia, US
Russia's effort to influence US elections is a conspiracy theory
Sputnik Greece
China, Iran, Russia, US
The US government demonises Russia and depicts President Putin as “the new Hitler”
Geopolitica.ru - Italian, paulcraigroberts.com
Russia, US
American biolaboratories in Ukraine threaten Russia
utro.ru
Russia, Ukraine, US
US protests organised to support Bill Gates' forced vaccination of Americans
US
The US and EU organized a neo-Nazi coup in Ukraine, which led to the loss of Crimea and an uprising in Donbas
Ritm Evrazii
EU, Ukraine, US
The organisers of "colour revolutions" in the CIS aim to destabilise the situation in Russia
life.ru
Russia, Ukraine, Georgia
US Democrats organised riots in US cities based on the Ukrainian scenario
from-ua.com
Ukraine, US
Kyiv hid the primary data of the MH17 crash from the investigation
News Front - Russian
Ukraine, The Netherlands
Crimea's return to the Russian motherland was based on a popular referendum
RT Arabic, aljoumhouria.com, elnashra.com, nabd.com, Khabar Masr, Khabar One, kachaf.com, elssayda
Russia, Ukraine
Soros' followers fear the US protests may lead to Trump’s reelection
Sputnik Spain
US
Ukrainian government lost its legitimacy after 2014 coup
new.crimiz.ru
EU, Ukraine, US
Ukraine refuses to adhere to the Minsk agreements
riafan.ru, ukraina.ru
Ukraine
Ukraine is preparing for an attack in the Donbas
News Front Hungary
Ukraine
Radio Liberty and VOA are a part of American propaganda machine and are banned in the US
Polnyi contact @ Radio Vesti
US
The United States is now provoking tensions between Russia and Ukraine
Pervyi kanal - Vremya Pokazhet
Russia, Ukraine, US
There’s no evidence that Russia was involved in hacking the Bundestag
Polnyi contact @ Radio Vesti
Russia, Germany
20,000 people took part in massive racist violence in Paris
News Front - French, News Front - English
France
The new coronavirus was engineered in France and then escaped from laboratories in China
Sputnik France, Sputnik France
China, France
Microsoft founder Bill Gates wants to reduce the population by promoting abortions
flux.md
US
Ukrainian ex-soldier drove into the crowd of protesters in the US
ria.ru, rg.ru, eadaily.com
Ukraine, US
GDP of European countries like Great Britain, France or Italy is much lower than the Russian one
RT France - YouTube
Canada, Italy, UK, Russia, France
By continuing to browse the site you are agreeing to our use of cookies.