And you are a Nazi, too! 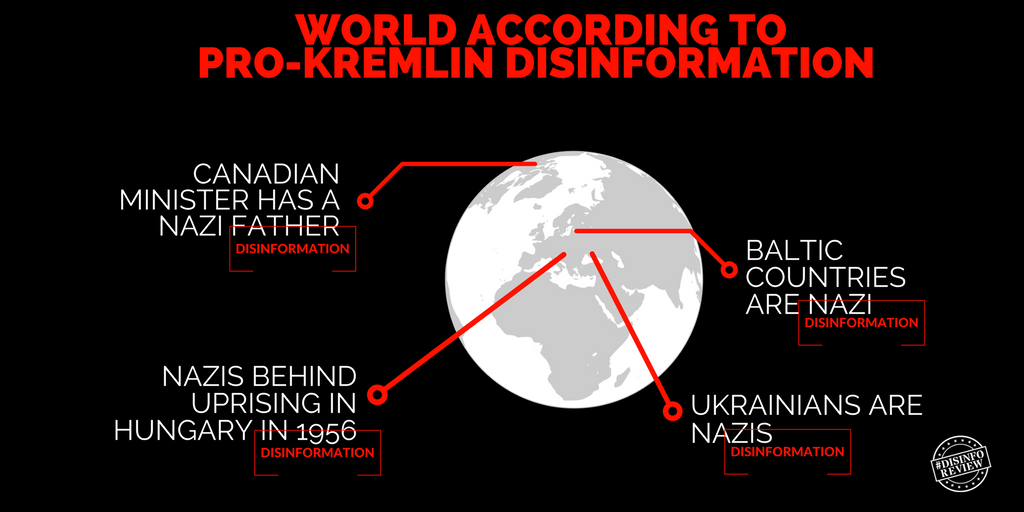 The pro-Kremlin outlets enjoy accusing others of being Nazi. Most frequently, this insult targets the Ukrainians and the people in the three Baltic states. But practically anything and anyone opposing the Kremlin’s interests can be “Nazi”, e.g. the anti-Soviet uprising in Hungary in 1956. Most recently, the new Foreign Minister of Canada was accused of being the daughter of a nazi collaborator in pro-Kremlin outlets http://bit.ly/2jILWu6. Mrs. Freeland is, incidentally, a prominent critic of Russia http://bit.ly/2jaCX4U.

As for Germany, the target was clearly Angela Merkel once again. Breitbart misrepresented http://bit.ly/2j5PXXI the polls ahead of the German election, stating that the Chancellor’s party was declining while the anti-immigration party has almost doubled its percentage in the polls compared to reality http://bit.ly/2jpnX24.

Also, there were reports that the German Ambassador to Ukraine had sent a letter to President Poroshenko, pressuring him to hand over Donbass to Russia http://bit.ly/2jQ82gq. Those reports were as fake as the letter http://bit.ly/2kjwDHr.

During the last week, we have seen some creative attempts to adjust history in pro-Kremlin media. For example, it was claimed that President Putin never waged a war on Chechnya and Chechens, but was in fact fighting Western-funded international terrorists and freeing Chechen people from their destructive influence and violence (our table presents some evidence from Amnesty International to the contrary) http://bit.ly/2iJiS8K.

It was also claimed that the UN in 2014 gave Russia the right to seize Ukraine http://bit.ly/2k7zLHh – disproven by the UNGA Resolution 68/262, which condemned Russia’s illegal actions in Ukraine and was supported by 100 United Nations member states, with only 10 opposing http://bit.ly/1RZGnjo. On Ren TV we also learned that a number of European cities were established by the ancient Russia, and also that Sanskrit originated from Russian. There was, however, no new historical evidence to accompany these claims http://bit.ly/2kjcmGj.

Pointing the finger at Ukraine

Meanwhile the disinformation on Ukraine continued to be in focus for another week, in parallel with the OSCE Special Monitoring Mission warning that the violence is on the rise again http://bit.ly/2j9BJ8q. We have previously reported about the link between a raised level of violence and a high amount of disinformation http://bit.ly/2hrUtDG.

This time Ukraine was accused of human rights violations in Crimea prior to the Russian illegal annexation (despite Human Rights Watch reporting about the decline in the protection of human rights since the annexation http://bit.ly/1RolEeE). It was also claimed that military instructors who had previously trained Daesh in Syria had now arrived to train the Ukrainian Armed Forces http://bit.ly/2j4sshX (repeating an older piece of disinformation trying to connect Daesh and Ukrainian army); and that the Government of Ukraine had illegally taken control of its own territory http://bit.ly/2jgM7hF.

As usual, no evidence was presented to support the claims, including how a democratically elected government can illegally take control of its own territory.