Another Shade of Hate 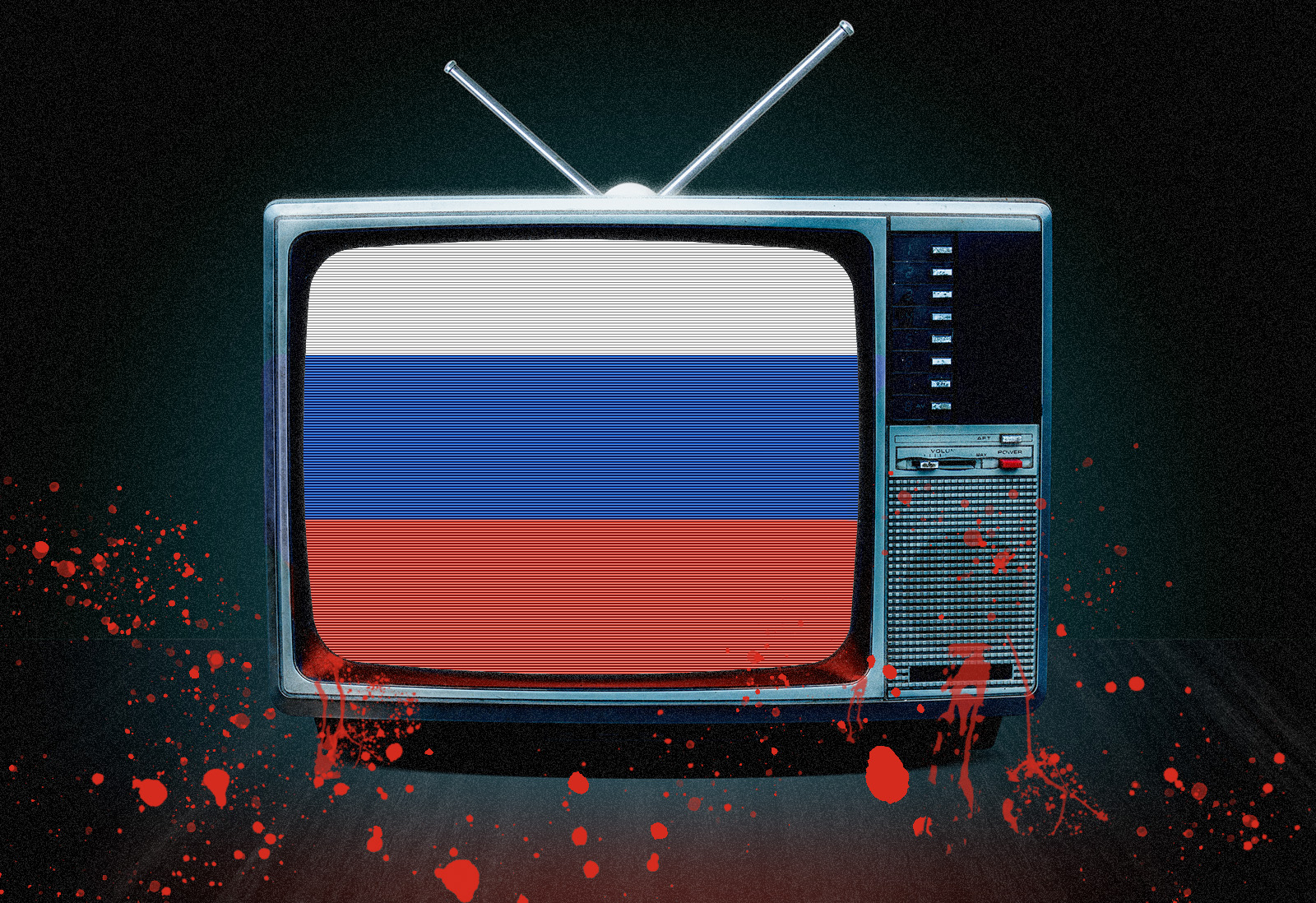 Disinformation, accompanied by hate speech, continues to pour out of Russian state-controlled outlets. This week we saw another variety: in an apparent effort to denigrate the Ukrainian armed forces, the Kremlin’s chief propagandist, EU-sanctioned Dmitry Kiselyov, resorted to homophobia.

On his Sunday night show Mr. Kiselyov aired footage ostensibly showing an interrogation of a captured Ukrainian soldier, who referred to himself in a demeaning manner (using vocabulary, which denigrates LGBTQI+ people in the Russian language) and said that his commander “roasted him under the tail”. Mr. Kiselyov also suggested that Ukraine was showcasing its LGBT troops to project a European image and conceal Nazism, “what kind of Nazism if we have gays among our troops”?

This is far from being an isolated incident when the Kremlin’s spin-doctors resort to denigrating the LGBTQI+ community for political means. In fact, homo- and transphobia are key ingredients of pro-Kremlin disinformation, in particular targeting domestic, Russian-speaking audiences. Often, homophobic narratives are wrapped in “haha-ganda” packaging and presented to Russian audiences as an insider joke at the expense of the depraved and “effeminate” West.

The examples are many: pro-Kremlin outlets have used homophobic tropes to mobilise Russian voters (vote, or gays will take your children!), suggested that gay couples could actually buy children at a fair in Brussels, alleged that gay marriage could be a cause of the coronavirus pandemic and that Western aid came with demands for gay prides.

While such claims may seem absurd and ridiculous from an outsider’s perspective, for domestic audiences locked in a tight grip of censorship and disinformation, they draw an impregnable fault line between vice and virtue, between Russia and the rest.

See, for example, a recent headline in pro-Kremlin outlets, claiming that Kyiv has sent “gay-Nazis” to fight Russians at the front. The message itself was a gross misinterpretation of international media reports about the LGBTQ soldiers in the Ukrainian armed forces defending their country against the Russian invasion. 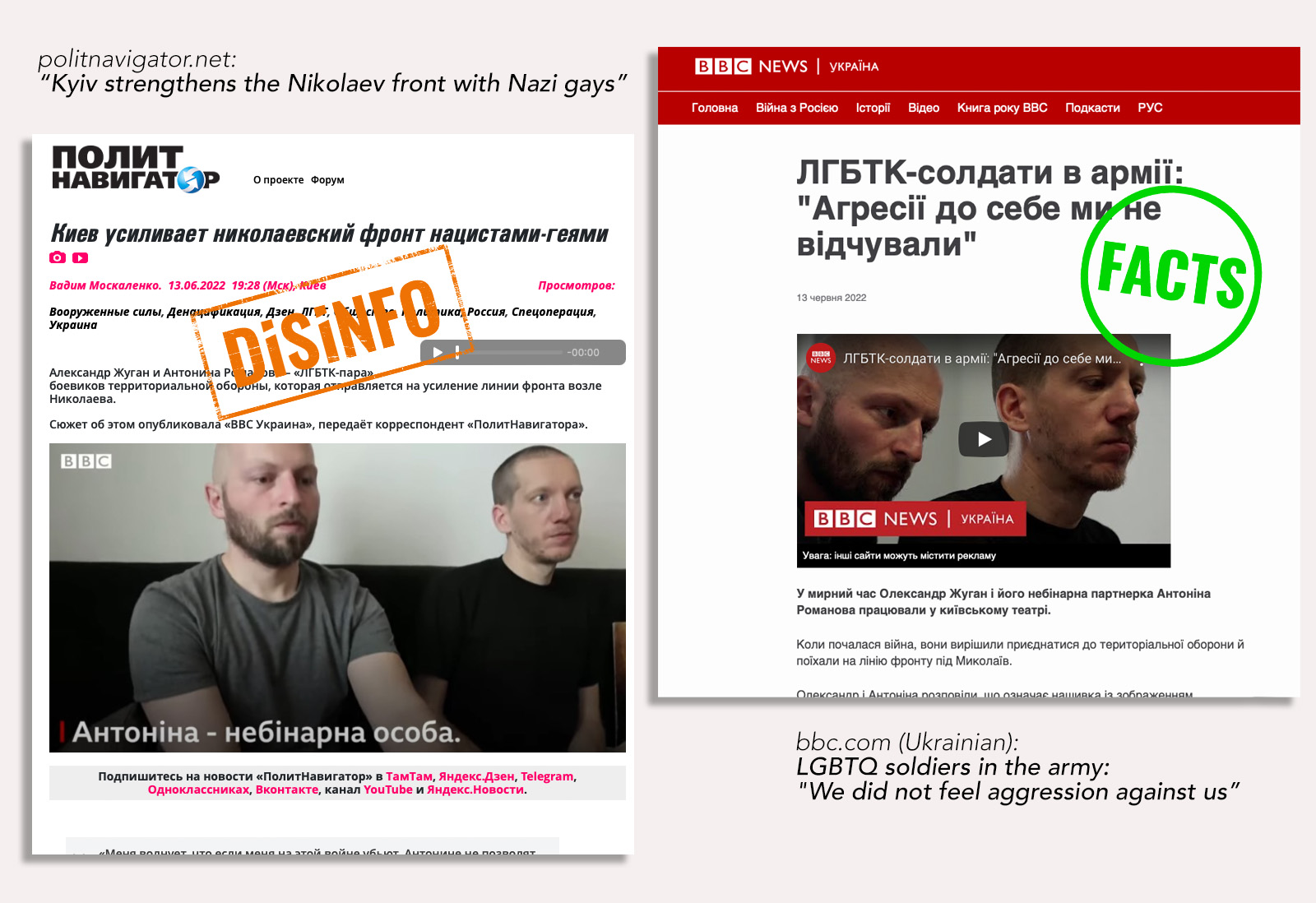 In the current context, the homophobic twist of the “Nazi Ukraine” disinformation trope is particularly sinister as it presents Ukraine and the Ukrainian people as symbols of all that is depraved, and therefore must be destroyed.

A case on point: recent comments by the Chief of the Russian space agency, EU-sanctioned Dmitry Rogozin, who called Ukraine an existential threat to Russian people, history, language and Russian civilisation, and called to “put an end to them”.

The Kremlin’s disinformation eco-system is vast and encompasses not only pro-Kremlin outlets, social media accounts, proxy websites, but the Kremlin’s officials too. The head of the Russian foreign intelligence service could stand among the most accomplished propagandists on Russian TV. At the end of the last year, Mr. Naryshkin claimed that Ukraine embodied “anti-Russia” and was killing civilians in Donbas. These disinformation messages, distributed widely through the pro-Kremlin disinformation ecosystem, formed the basis of the Kremlin’s attempts to justify its brutal invasion of Ukraine.

More recently, Mr. Naryshkin made an astounding allegation that Ukraine was considering surrendering its sovereignty to Poland. Mr. Naryshkin’s claims were published across multiple Russian state-controlled media outlets and then amplified by at least 749 Russian-language and 15 English-language websites, and the Japanese version of Sputnik. A RIA Novosti article repeating the same claims was viewed at least 400 thousand times.

That pro-Kremlin disinformation chose Poland as the “villain” in this story is not an accident either. For a while now, Russian state-controlled media has been engaging in narratives of historical revisionism and trying to paint Poland as a hostile state with imperial ambitions. Poland is routinely accused of trying to “bite off Western Ukrainian lands”, erase Ukrainian borders and threaten the territorial integrity of Ukraine.

This is the latest addition to a long line of disinformation messages aiming to undermine Poland’s unwavering support for Ukraine, sowing divisions between Ukrainians and Poles, and distract attention from the fact that Russia is the only state in the world that has been violating Ukraine’s sovereignty and territorial integrity since 2014.