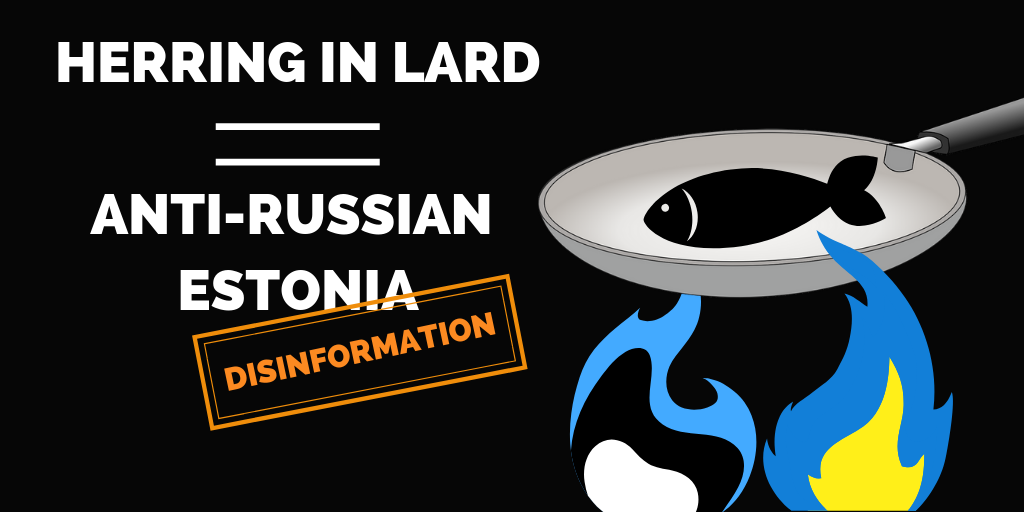 Some say that lard is the new health food. Others claim it makes your cholesterol go up. Pro-Kremlin media, in turn, propose a recipe: fry a herring in lard and you will get anti-Russian Estonia. Welcome to this week’s Disinformation Review!

Have you ever tried herring deep-fried in lard? According to pro-Kremlin media, this is something that every Estonian politician has tasted, as they turned Estonia into a small, angry, anti-Russian project.

Disinformation this week came back in a new wave directed at the Baltic states. On the one hand, it questioned their statehood and independence, on the other it tried to manipulate the audience by showing ‘examples’ of how bad the Baltics are, especially towards Russian speakers and people of Russian descent.

Disinforming outlets told stories about Estonians forbidding Russian veterans to wear their medals, which were as close to the truth as the ones accusing all Baltic states of glorifying Nazism. Their aim was to portray Lithuania, Latvia and Estonia as Russophobes, in order to sow distrust, especially among Russian speakers.

But do not lose your appetite in the way that the Baltics and Ukraine, according to disinforming outlets, lost their sovereignty because of Europe (which, by the way, was claimed to have limited sovereignty, too)!

Main course: the spectre of war

A spectre is haunting the world – the spectre of war. It is supposed to come in 2022 or 2026, as the disinformation narratives say this week. The earlier date was linked to a supposed attack on Belarus, staged by the West, which should until 2022 flood the Belarusian opposition with grants, in order to slowly take over the whole country. The later date is when the West is supposed to attack Russia – this is what the Rail Baltica project is really for, as claimed by a few disinforming outlets.

Add those narratives to the ones describing Poland and Ukraine as having ‘military psychosis’ as well as behaving aggressively towards Belarus and Russia, and you have a classic pro-Kremlin recipe for evoking fear in the audiences. While being afraid, one might be distracted from Russia’s clear violation of the Intermediate-range Nuclear Forces (INF) treaty. One might also not notice that the bellicose narratives contradict each other. And this is how another box on the disinforming media’s list is ticked: chaos and doubtfulness were aroused.

A touch of conspiracy for dessert

This week, disinforming outlets did not shy away from using well-known conspiracy theories, trying to prove the existence of hidden agendas and éminences grises. They were also ripe with narratives claiming the West’s ignorance of supposed impeccable, solid evidence provided by Russia, both in the case of Sergei Skripal’s poisoning and the downing of MH17. Ukraine was targeted, too, predominantly in the sauce of accusations of behaving aggressively towards Russia, Belarus and in the Azov Sea. Nothing better than a good debunk to digest a heavy disinformation meal.

Some say that appetite comes with eating. For those still hungry for more – see the extensive list of disinformation cases we gathered for you this week.