Back to the USSR? Russian TV on referendums and mobilisation 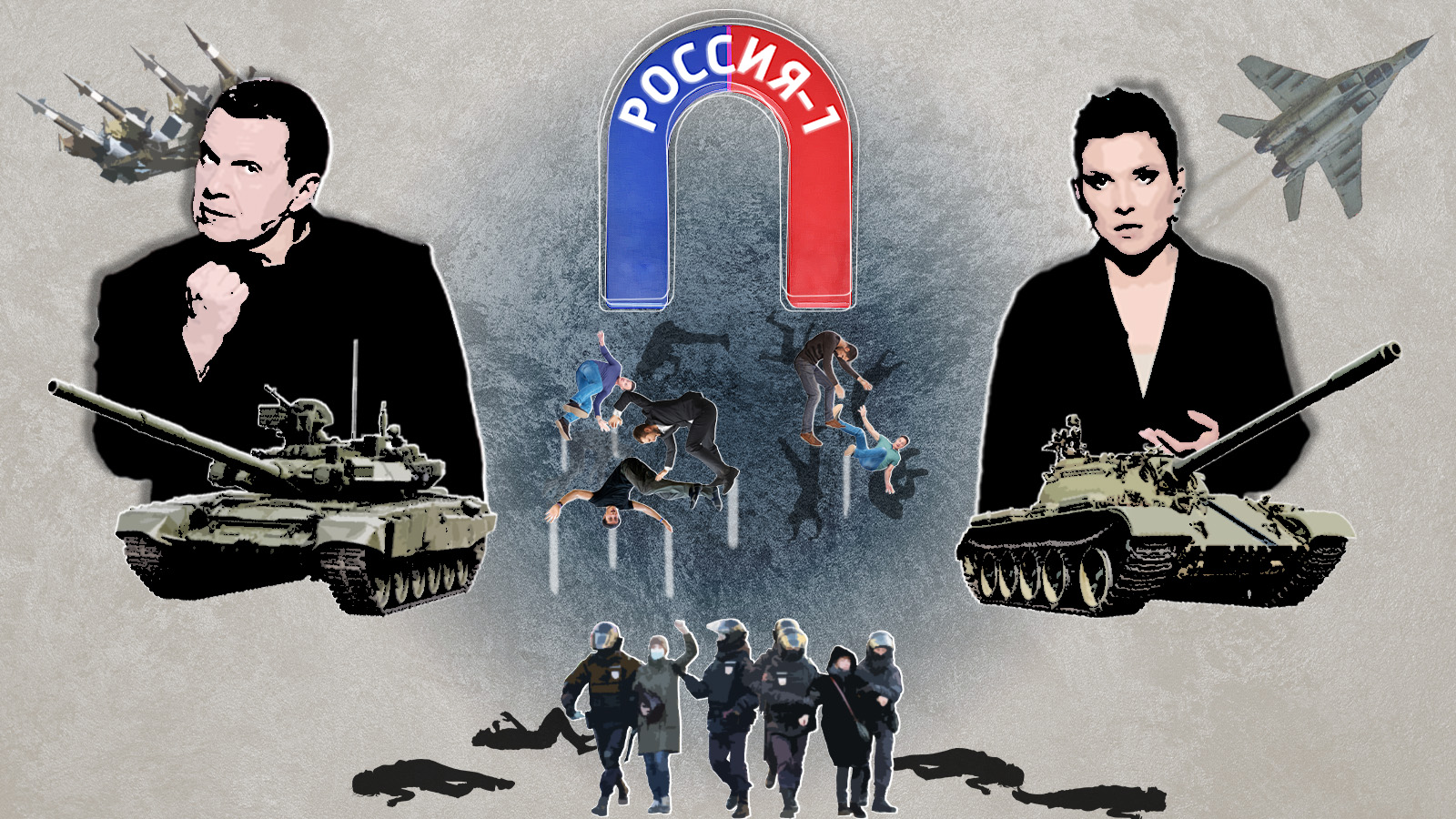 Watching Russian state TV is increasingly like entering a parallel world. The more tense the topics become – the referendums, military mobilisation, situation on the battlefield – the more one-sided the coverage gets and the more heavy-handed the propaganda sounds. The past days illustrate a sort of climax since the days right after 24 February, and few platforms provide it more clearly than the Sunday main evening news on the Russian state TV Channel One. It is a two hour “Kremlin compass” telling audiences what to think with its long, ideologically-twisted stories. Other main TV channels are trailing along such as Rossiya 1 and Rossiya 24 but with different political talk-shows featuring firebrand TV hosts.

Sunday 25 September – summing up a week to remember

Here is the world according to Channel One:

Referendums: A total of 25 minutes on the referendums in the “People’s Republics” of Donetsk and Luhansk as well as the regions of Zaporizhzhia and Kherson: how great everything will be when they join Russia. The masses rushing out to vote and wanting to join Russia now. This so-called report is sprinkled with clips of Putin leading, guiding and assuring Russia cannot let these regions down or be subject to the “neo-Nazis in Kyiv”. Russia is obliged to follow the “will of the people” – according to Putin’s words.

By now, even the slowest viewer should have understood that the scene is set for the next round of the expansion (i.e., illegal annexation), most likely during the coming days.

Later, a festival manifestation in Moscow is shown with a suspiciously limited camera angle so that we don’t get to see the possibly small numbers of people in the crowd. The venue is the important factor: in front of the statue of World War 2-hero Marshal Zhukov just at the entrance to the Red Square in Moscow: the place for true patriots. 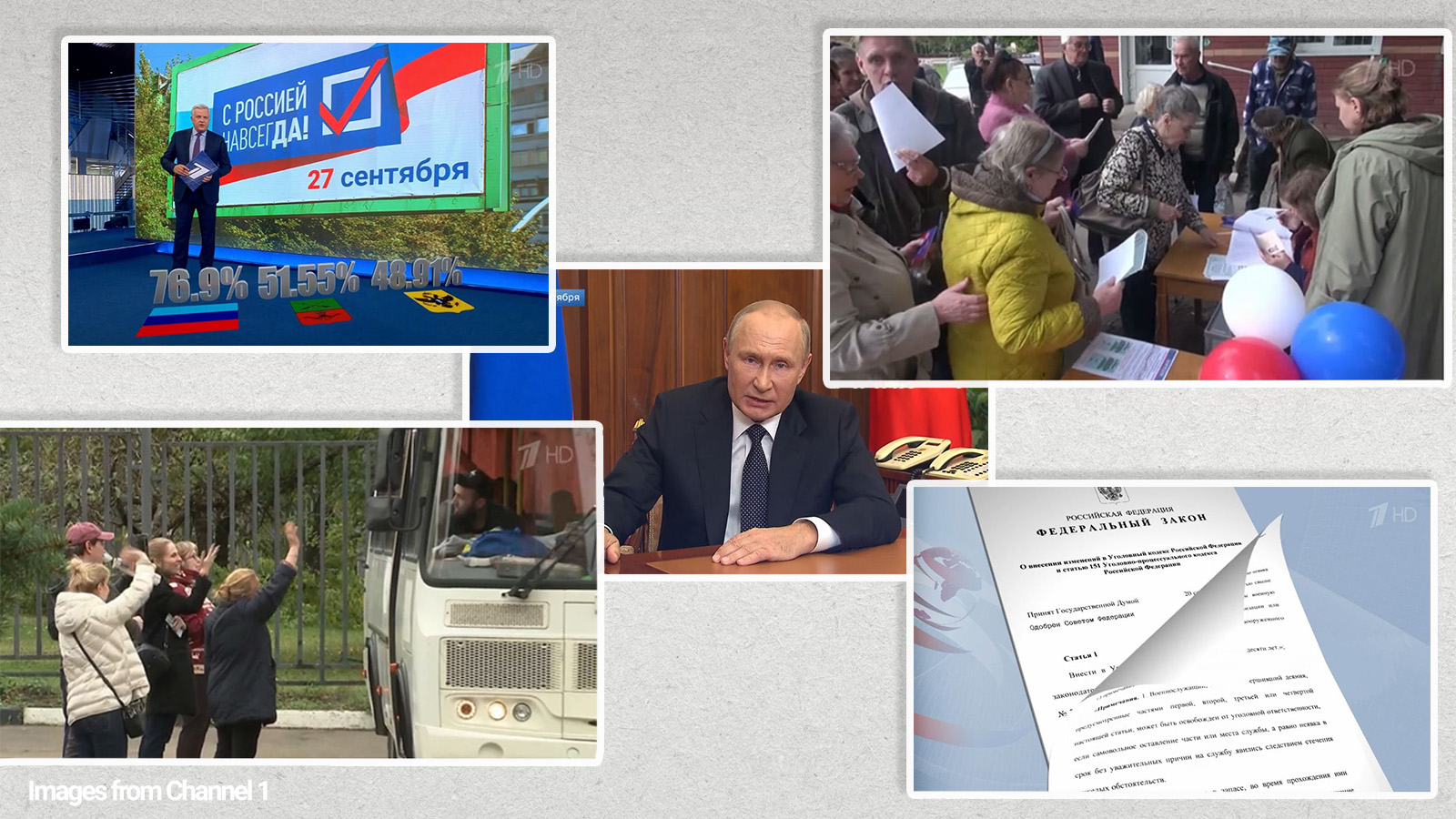 Not a single question or deliberation about what concerns such an annexation could raise in Kyiv or internationally in the UN or in Beijing.

Mobilisation: 15 minutes on mobilisation. Patriotic men, calm and considered, queuing to be mobilised as soldiers. Orderly paperwork with assurances of handsome salaries. So many volunteers coming forward. Proud families waving good-bye at the departing buses. Defence minister Shoigu explaining and assuring every detail is fine. The Crimea leader’s son being mobilised – in what looks like a clear counter-story to the news of Kremlin spokesman Peskov’s son refusing military service.

No coverage of the many protests against mobilisation across Russia and violent clashes with police. No mention of the massive rush of military-aged men to leave Russia at a scale unheard of in recent years with kilometres long lines of vehicles, bicycles, etc. at border crossings. This news is found in large quantities on social media channels and is the talk of town in all large Russian cities. No mention of the sacking of Deputy Defence minister Bulgakov, the general believed to be responsible for large parts of the logistics problems for Russian units at the front.

Yet the façade is starting to crack: by the next evening, Monday, two of Russia’s leading propagandists were cursing military commanders that mobilisation was not going according to plan. A Kremlin classic: useless mid-level bureaucrats obstructing the grand vision of the leader.

“Ukraine is being defeated”: Close to the next 15 minutes are devoted to the good spirit and success on the front line. The usual footage of explosions and a few front line soldiers in what is clearly close combat accompanied by a confident battalion commander’s words. A few Ukrainian POWs, currently held, are shown on camera saying they are being treated well. Their words do not appear too convincing. It seems like another counter-story against the tide of reports of mistreatment emerging from Russia like this UN report on Russian filtration/detention camps. 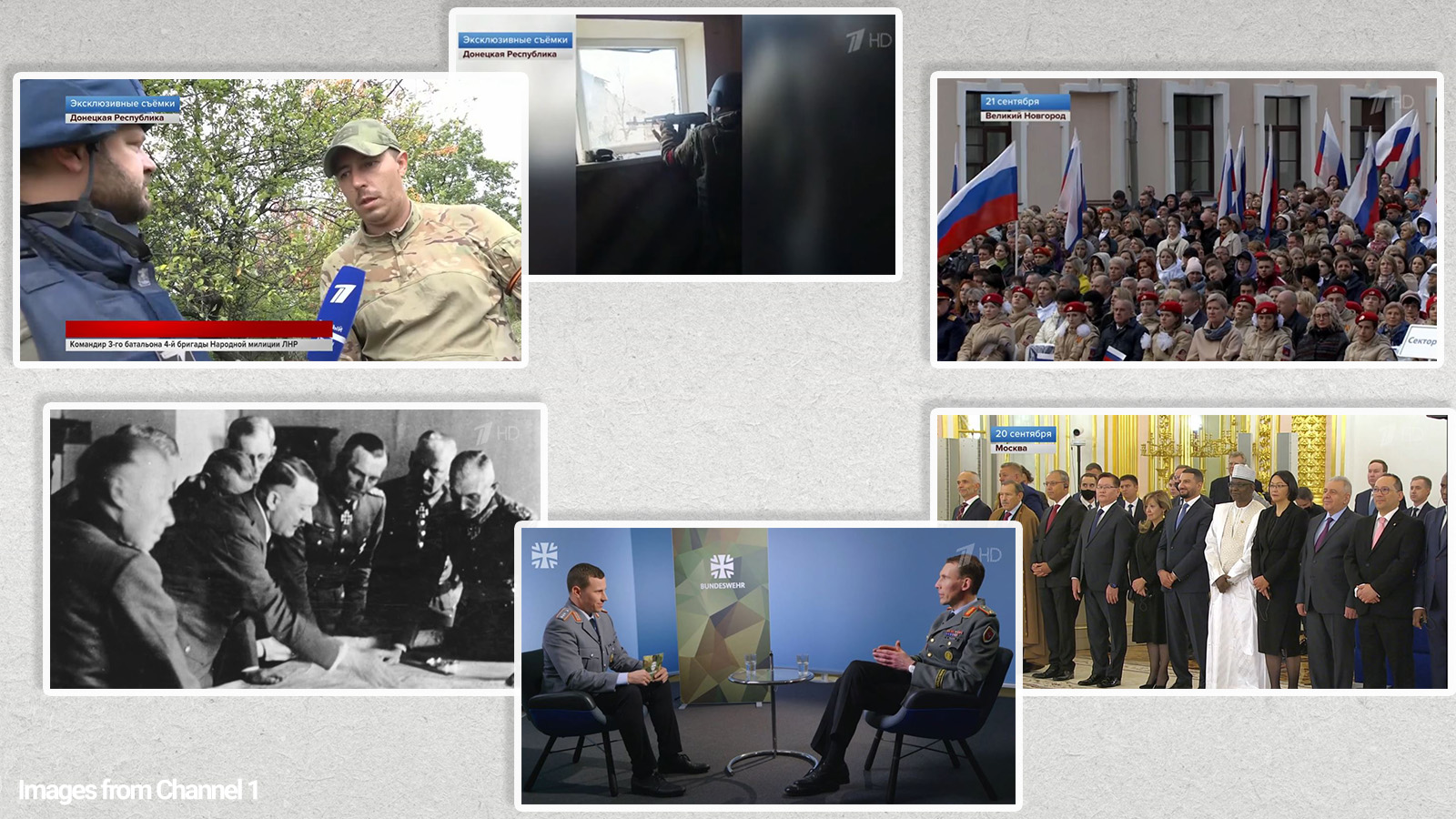 POW swap: Later, a good five minutes is devoted to this week’s landmark swap of prisoners of war. The focus is exclusively on the 55 Russian soldiers being released by Ukraine. All praise to the Russian authorities having shown care for the men. Men are shown happy arriving in Moscow (in much better condition than those Ukrainian soldiers defending the Azovstal being released from Russia with shocking pictures).

No mention of the fact of Ukrainian Azov battalion soldiers being released, which antagonised hard-core Russian nationalists such as former commander in Donetsk Igor Girkin on social media. This seems to be the first time an opportunity to shout “Nazi” on Russian state media was sacrificed for the currently more important message to the Russian public undergoing mobilisation: if you fall prisoner of war/[special operation], rest assured mother Russia will get you home.

The West is in decline – but still dangerous: The next 25 minutes brings a mix of clips, spots and reports which represent classic themes in the Kremlin media playbook:

– The US is a mastermind of the EU, Ukraine, and a host of other countries which have lost sovereignty. They rally behind NATO plans to attack Russia just like Hitler and the Nazis, now more sinister with preparatory guerrilla groups inside Russia (message to the viewer: watch out for the fifth column).

-Russia is a staunch defender of world order and protector of the poor, while Europe is near collapse. Washington is trying to break the UN system but Russia is supported by China. The West, including the EU, is fabricating a crisis of global food insecurity – stressed by Putin to the newly received foreign ambassadors in the Kremlin. Most of them from countries outside Europe.

-The West, mocked as “the old world”, is on the brink of economic collapse due to its own sanctions policy with incompetent and laughable leaders – see our account of Kremlin “hahaganda”. Widespread demonstrations haunt most of the EU where electricity is turned off and people are starving to death. The story is contrasted with a short report on the Russian government budget proposal for 2023: everything ok, money will be available to cover all social obligations. The message is classic Kremlin: You, the viewer, shall be grateful living in stable Russia and not in the tumultuous Europe, deprived of moral and material values. 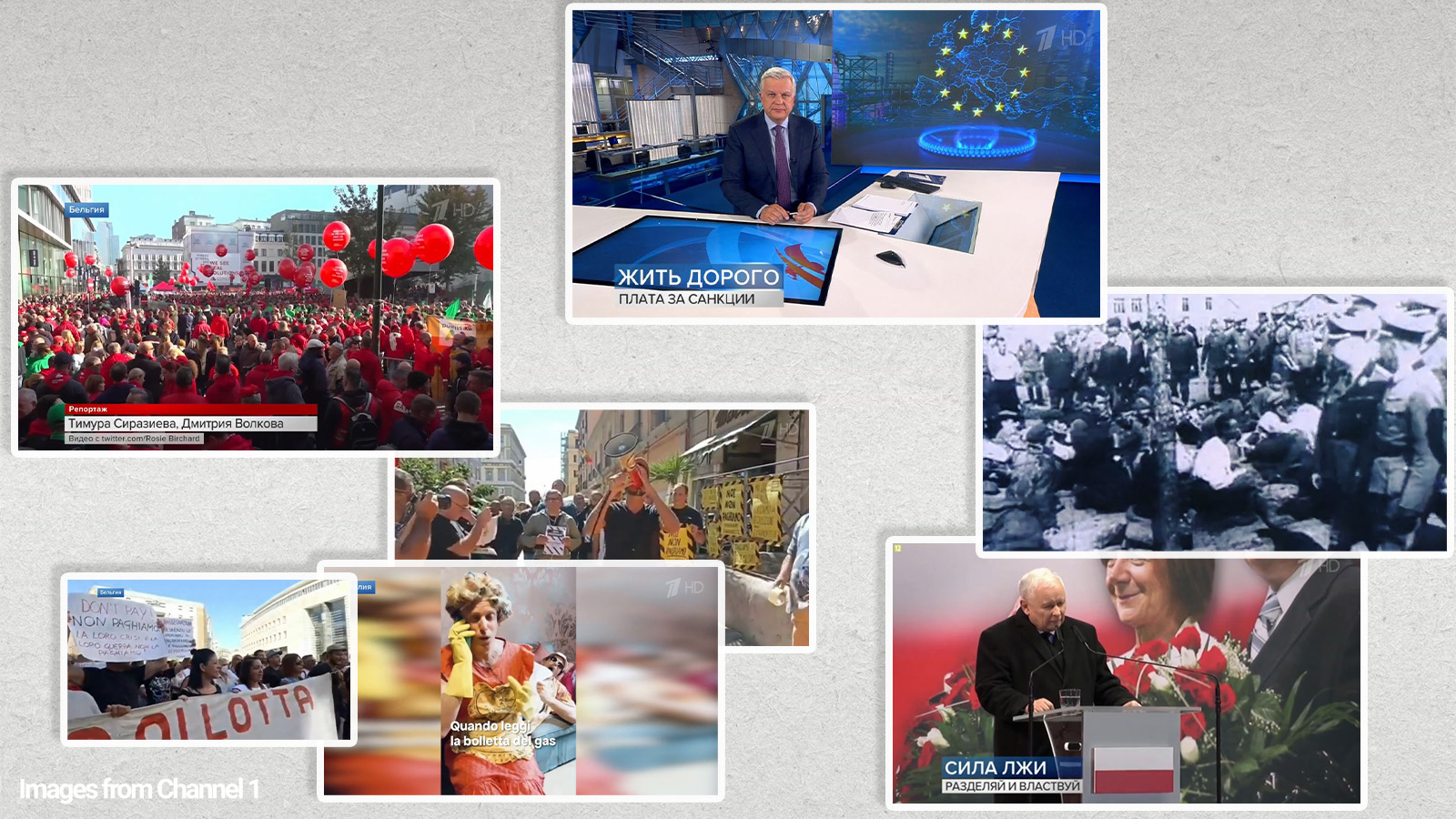 The Finale: Poland Among the favourite Kremlin scapegoats is Poland. Our database features more than 1,100 examples of Poland-related disinformation. This time the occasion is as a warm-up to next year’s Polish elections and the discussion about the April 2010 crash of the Polish presidential airplane near Smolensk, which killed 96 of the country’s top hierarchy. During close to 10 minutes, Poland is framed as revengeful towards Russia, wanting to host US nuclear weapons and all leading politicians drumming up Russophobia. Followed up by a reminder of who was right in history: very visual accounts and discoveries of remains of heroes from the World War 2 Leningrad battle.

Seasoned viewers of television during the late Soviet Union will notice a striking parallel to the Russian TV these days. Like 30 years ago but now in HD format, the same framing of reports, the way vox-pops are carried out and the prominence of women, pensioners and children plus patriotic workers. The great and wise leaders, headed not by the General Secretary of the Communist Party but by Putin. The journalists, holding the microphone for the leaders, omit any even basic journalistic question. The heavy focus of World War 2 with graphic footage of suffering. The West; US, NATO, EU on the way to collapse – but strangely still all-powerful, presenting a threat and preparing war against not the USSR, but Russia. The always imminent danger of internal enemies, fifth columnists and traitors to society, of which the Russian citizens must be alert.

Better to secure the motherland with more territory while getting ready for the defence.

The real cost of all the regime’s military adventurism is an internationally isolated and prestige-losing Russia, sanctioned by most of the democratic world, with its citizens essentially denied the right to freedom of speech, freedom of mobility and instead forced to war. 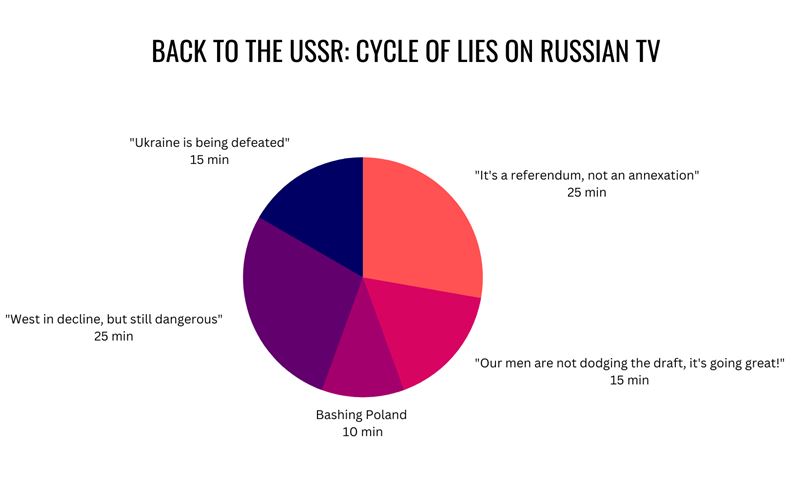