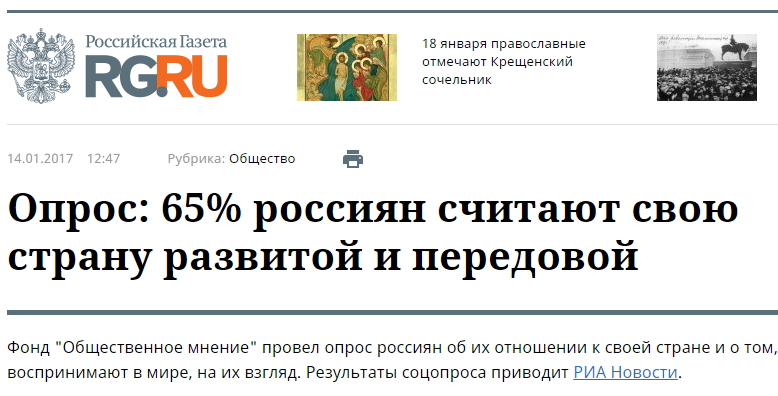 In the Soviet Union, many citizens, perhaps even a majority, were able to “read between the lines” and take the official political rhetoric, the so-called ofitsioz, with a pinch of salt. The official state propaganda’s success was limited, even if only a minority actively expressed their discontent.

A newly published poll from Russia’s “Public Opinion Fund”, which has been covered in articles in RBC Daily and Rossiyskaya Gazeta, indicates that in today’s Russia, the official narratives are rather successful, even if the current political masters in the Kremlin only keep the most strategically important media under direct control and do allow limited freedom to media with limited outreach.

For example, 85% of Russians polled by the “Public Opinion Fund” stated that the surrounding world is afraid of Russia. While this might indeed be the case, the more interesting point is that 75% believe that this is good. This clearly shows that the overarching narratives of confrontation, war mongering and conspiracy theories that dominate nationwide TV, and which the Disinformation Review has written about many times, have in fact had very direct influence on the way Russians think about their country’s role in the world and what is right and wrong in international relations.

Similarly, when asked how they perceive life in Russia, 70% described Russia as a free country, 65% as a highly developed country and 58% as rich. In this case, the systematic disinformation campaign about how terrible life is outside Russia, and in the West in particular, can have an influence on the number of Russians misperceiving Russia’s relative degree of freedom, development and prosperity.

Finally, 51% of Russians think that their country is being misunderstood abroad. This result is linked to the disinformation narrative about so-called “Russophobia”, which has been debunked on several occasions in the Disinformation Review.

While Soviet propaganda was based on the Marxist-Leninist ideology, today’s propaganda in Russia can, as we see, operate along very different narratives that do not have to compete or fit into one and the same overarching philosophy. Messaging can even contradict itself over time, as long as it follows the rules of traditional political populism and offers stories the people want to hear.