"Because of Crimea. We basically took it." 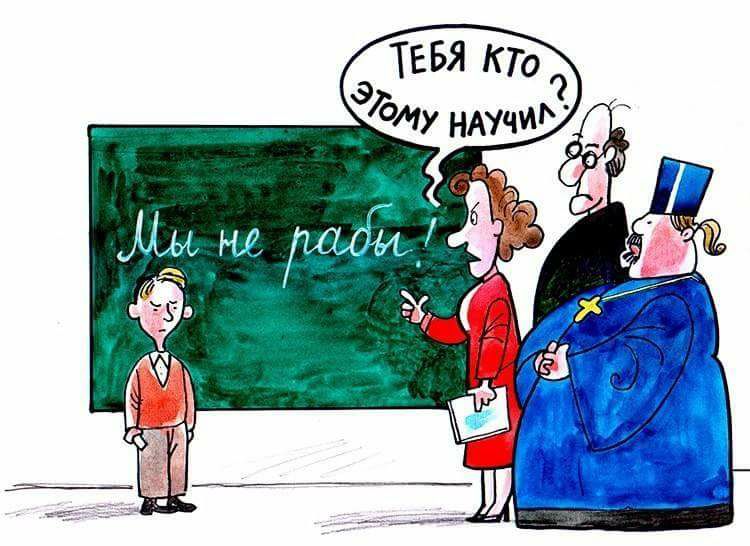 “Who taught you that?” So this school boy is asked after he has written “We are not slaves!” on the blackboard. The problem is obviously not the handwriting, which is perfect. The problem is the slogan, which has been used by Russia’s opposition at protests against the Russian authorities.

This week, disinformation and its role in the Russian school system became topical after independent Russian outlet Meduza published a recording of a conversation in a school class in Bryansk in South-Western Russia. A teacher and the school’s headmistress explain to the children that the conflict in Ukraine is the fault of the EU and the US, that Crimea was not illegally annexed and that the corruption allegations by opposition politician Alexey Navalny against Prime Minister Medvedev should not be taken seriously. The recording and the transcript of the conversation, which was initiated by the school management after a boy in the class had called for joining a pro-Navalny demonstration, was widely shared and discussed in Russian traditional and social media. Below are some highlights from the discussion in the classroom, which has now been translated into English and published by Global Voices. It becomes clear from the recording that not all pupils in the classroom willingly accept the school management’s message.

Principal: And what’s causing this crisis?

Principal: One more time — what’s the cause? The European Union, right? And our leader is managing a very stable and very strong policy. He has an enormously high rating on the world stage. Due to what? Due to foreign policy. [Russia’s] domestic policy, of course, is rather weak. Why? Well, because there’s no money. And we’re feeling that now, most of all…

Principal: And why’s that? Tell me: what’s the reason?

Student 2: Because of Crimea. We basically took it.

Principal: … And why did the whole war in Ukraine start in the first place?

Student 2: Well, because of the revolution…

Principal: Because of the what?

Student 2: The transition of power.

Principal: Kid, you haven’t read anything about this and you don’t know a thing. You’ve got some very superficial knowledge here. What started this whole conflict? Maybe it was because America stuck its nose in?

Principal: And you’re for what exactly?

Principal: And what exactly is justice?

Student: It’s what we don’t have right now.