How to Become a Stateless Nationalist 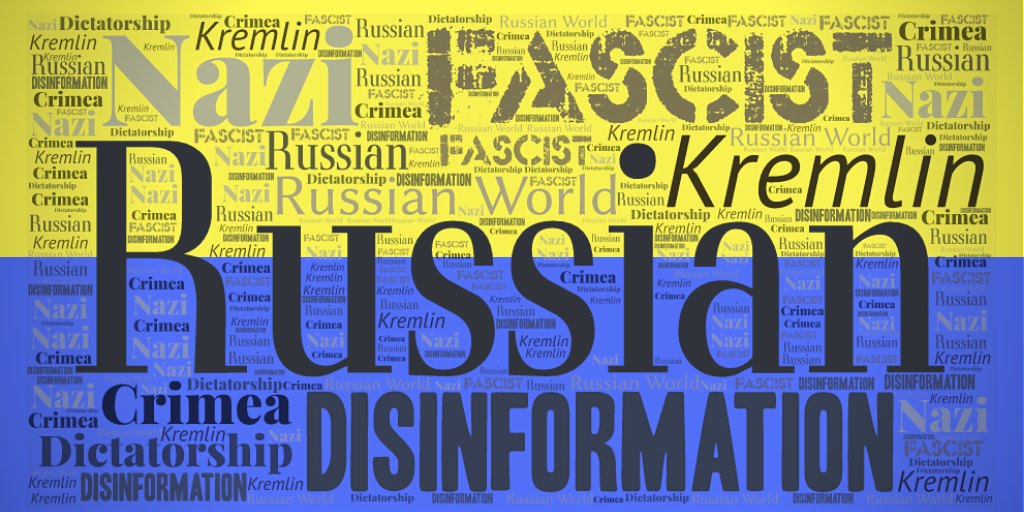 For the past several weeks, the Kremlin’s channels have focused mainly on spreading disinformation about Western countries: trying to bury the facts about the Skripal poisoning under distractions and fakes; or inventing other chemical and biological attacks, like here, or here. But this past week, Russia’s disinformation campaign has re-focused on its number one target: Ukraine.

Thus, Kremlin-directed TV shows poured out the vitriol of disinformation messages known already since 2014, claiming that:

All these disinformation messages have been proven false countless times, yet pro-Kremlin outlets keep repeating them – showing again that their purpose is not to inform, but to spread lies, to disinform, mislead, and spread hatred.

The debunks are once again repeated under the individual cases. We highlight here the general underlying strategy behind these fabrications. As documented by historian Timothy Snyder in his book The Road to Unfreedom: Russia, Europe, America, the message denying that Ukraine is a state was spread already by the fascist philosopher Ivan Ilyin in the first half of the 20th century, and was repeated later by top Russian representatives. By 2014, the word “fascist” had became synonymous with “Ukrainians who resisted Russian invasion” (chapter 4).

“Schizofascism was one of many contradictions on display in spring 2014. According to Russian propaganda, Ukrainian society was full of nationalists but not a nation; the Ukrainian state was repressive but did not exist; Russians were forced to speak Ukrainian though there was no such language,” writes  Snyder.

The claim that “country XY is not a state anymore” is not new in the Kremlin’s arsenal. In the note of the USSR government to the Polish Ambassador, Foreign Minister Molotov justified the Soviet invasion of Poland with the claim that “the Polish state ceased to exist”.

Show me your evidence! Well, THAT is no evidence

But the pro-Kremlin outlets did not abandon Western countries totally. A significant portion of the Russian TV shows focused in this past week on the recent revelations in the case of the poisoning of Sergei Skripal, and in particular on the identity of the two GRU agents involved in it – as presented in joint investigation by Bellingcat and The Insider. They also focused on the recent expulsion of GRU agents who were trying to hack the OPCW in the Netherlands. 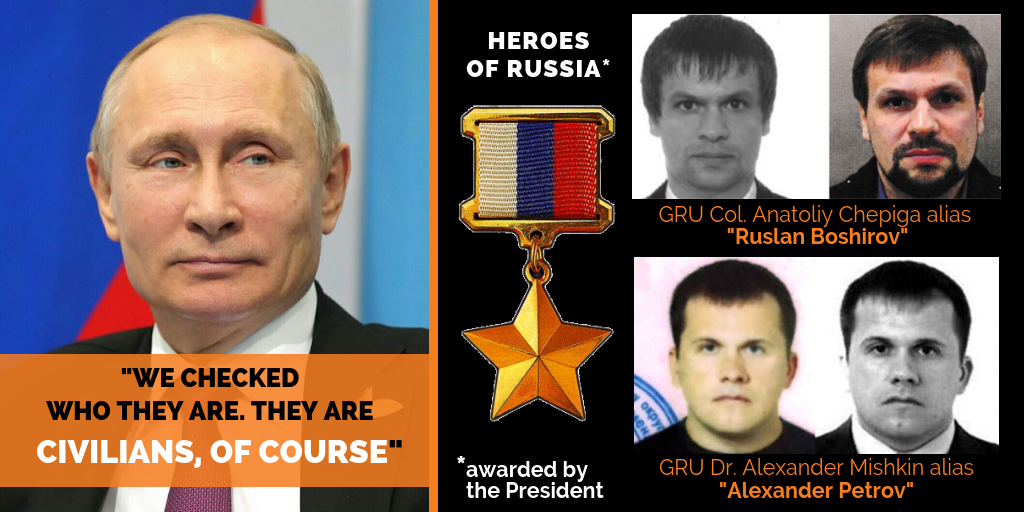 This time, the disinformation organisations have not yet produced any “counter-evidence”, like faked documents or pictures pushing an alternative version of the story – as we have seen so often for example in the case of MH17. The defensive lines instead mostly followed two strands: that “The West is blaming Russia for everything bad that happens”; and that “there is no real evidence at all”.

Thus, we saw rather primitive rejections of the evidence presented, like: “Bellingcat did not investigate the Skripal poisoning”; “there is no evidence that Chepiga and Mishkin are GRU agents”; “the GRU agents were no GRU agents, but mere IT experts”; or “the OPCW and other international organisations are Russophobic”.

Last week, Czech radio published a story that the two GRU agents who tried to poison Skripal in Salisbury were following him already a few years ago during his visit to the Czech Republic.

And here again, the Pro-Kremlin disinformation machine produced a rather surprising defence: allegedly, the agents Chepiga and Mishkin did not go to the Czech Republic to follow their future victim, but to check on the Czech supplies of Novichok (the Czech Republic has clearly denied producing Novichok). How the idea that Chepiga and Mishkin were on a visit to check supplies of Novichok helps exonerate them remains a mystery.

Repetition is the mother of all disinformation

In order to achieve their desired impact, disinformation messages need to be constantly repeated, through as many channels as possible – as e.g. the RAND report The Russian “Firehose of Falsehood” Propaganda model described already two years ago. And some of the “Golden Oldies” of disinformation were indeed repeated again this week, targeting organisations and individuals that are very high on the target list of Russia’s propaganda. So, we learned: “the White Helmets smuggle chlorine to Syria and stage provocations”; “Angela Merkel plans to relocate 500,000 migrants to Georgia”; and “after staging colour revolutions in Georgia and Ukraine, George Soros is now planning a colour revolution in the US”. See the table for the debunks.

All this messaging shows the clear distinction between real media on one hand, and tools of a disinformation campaign on the other. Whereas real media might make a mistake, but when proven wrong will correct it, the pro-Kremlin disinformation outlets keep deliberately repeating false messages no matter how many times they are presented with the facts.

Date
Title
Outlets
Country
US project to revive fascism in the EU
Website of the "Institute of High Communitarianism"
US
Ukraine is a part of "Russian World"
Pervyi Kanal
Ukraine, Russia
Former East Germans are still second-rate citizens in current Germany
Rossia 24 - YouTube
USSR, Germany
The GRU duo went to Czech Republic not to follow Skripal, but to track Novichok, which the Czechs used to have
ntv.ru
UK, Czech Republic
The supposed GRU agents arrested in the Netherlands were actually mere IT experts
ntv.ru
The Netherlands
Bellingcat did not investigate Skripal poisoning and publishes leaks from British intelligence
vesti.ru, Vesti.doc talk show @ Pervyi kanal
UK, Russia
George Soros is planning a colour revolution in the US
TVC
Georgia, US, Ukraine
There is a civil war in Ukraine and Russia has no role in it
60 minut @Rossiya 1 - YouTube
Ukraine, Russia
Ukraine has started a war against its own nation
60 minut @Rossiya 1 - YouTube
Ukraine, Russia
A monument to the Soviet Soldier-Liberator demolished in Lithuania
Pervyi Kanal
USSR, Lithuania
Ukraine is a Nazi regime
Pervyi Kanal
Ukraine
OPCW violates Russia's rights and/or demonstrates open Russophobia
Vesti.doc talk show @ Pervyi kanal
Russia
White Helmets smuggle chlorine into Syria and they stage provocations
Vesti FM - YouTube
UK, Syria, US
Russian TV exposed the lies of US special envoy for Ukraine
60 minut @Rossiya 1 - YouTube
Ukraine, Russia
The dialogue between Russia and the West is limited to sanctions, pressure and threats
Vesti.doc talk show @ Pervyi kanal
Russia
There is no evidence the Skripal poisoning suspects are GRU agents
Evrozona @ Vesti FM
Russia
The proportion of people who want friendship between Russia and Ukraine remained the same over the past 10 years
RT English
Ukraine, Russia
EU will change the political regime in the UK to annoy the US
Tsargrad TV
UK, US
Europe is dying: decay of moral and family values
Kramola
The recent ammo depot explosion in Ukraine was meant to hide evidence on MH17
vz.ru, tvzvezda.ru, Tsargrad TV, Moskovskij Komsomolets, ukraina.ru
Ukraine, Russia
Ukraine is not a country, it is a territory
Pervyi Kanal
Ukraine
There is no elected parliament in Ukraine
Rossia 24 - YouTube
Ukraine
Ukraine is a Nazi dictatorship
60 minut @Rossiya 1 - YouTube
Ukraine
Mustafa Dzhemilev is a terrorist who calls for killing Crimeans
60 minut @Rossiya 1 - YouTube
Ukraine
Russia does not wage any war in Ukraine. Ukraine is governed by pro-Fascist elites
60 minut @Rossiya 1 - YouTube
Ukraine, Russia
"Glory to Ukraine" is a Nazi greeting
Vesti.doc talk show @ Pervyi kanal
Ukraine
Finland cooperates with NATO in order to get territory in the Arctic
Baltnews Estonia
Finland
There is freedom in Crimea, whereas Ukraine is governed by criminals and terrorists
News Front - Hungarian
Ukraine, Russia
More than 50% of Ukrainian population in Dnipro city support Russia
ukraina.ru
Ukraine, Russia
Ukrainian Secretary of the National Security and Defense Council urged to prepare for war with Russia
tvzvezda.ru, Tsargrad TV, Izvestia, regnum.ru
Ukraine, Russia
Merkel plans to relocate 500,000 migrants to Georgia by the end of 2020
Mystar.ge, Facebook resource
Georgia, Germany
The US plans to apply sanctions against Georgia
Saqinform
Georgia, US, Russia
By continuing to browse the site you are agreeing to our use of cookies.