Being occupied as a privilege 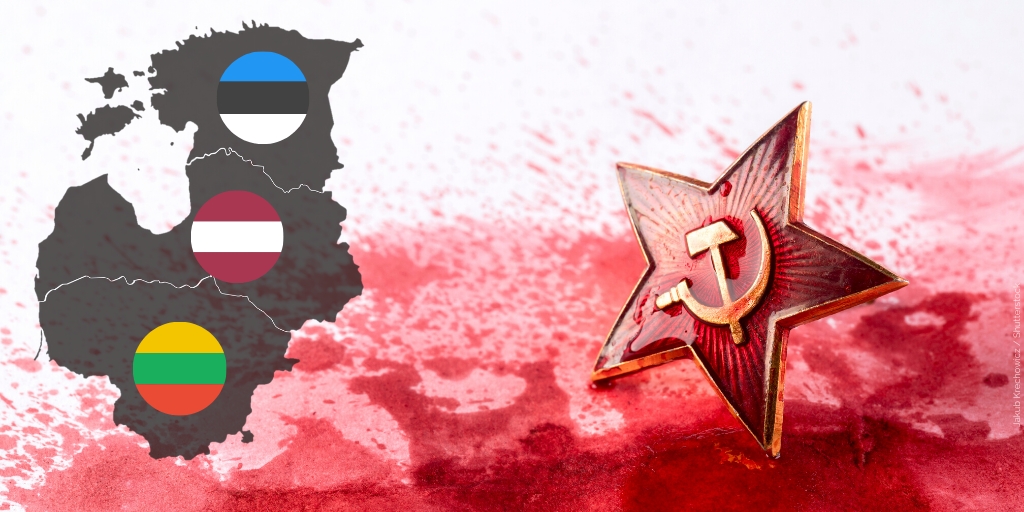 In September last year we revealed how the Russian Ministry of Foreign Affairs smeared the Baltic countries by claiming they have not become democracies respecting the rule of law. Despite the pushback, the Kremlin’s disinformation campaign has once again been dialled to history, due to the postponed Victory day parade celebrating the 75th anniversary of WWII.

This time, the kick-off came from the Twitter account of the Russian embassy in Estonia, sharing an article from Russia Beyond titled “Why the Baltics was a great place to live under the Soviets“. 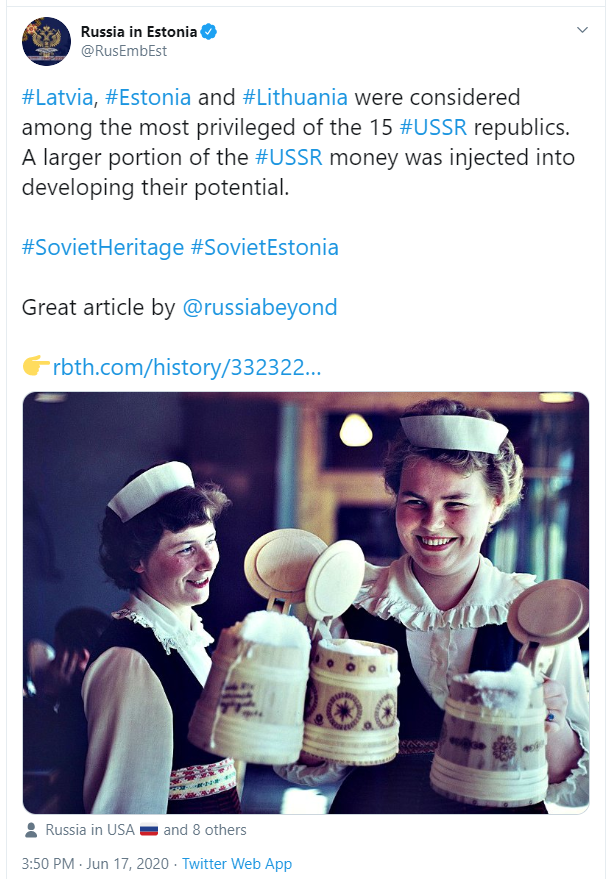 The article itself, based constructed around a series of glossy photographs of Soviet-occupied Estonia, Latvia and Lithuania in the 1960s, 1970s and 1980s, was meant to showcase the Baltic States as the most privileged republics in the USSR and display “the best of what this gigantic country [i.e. the USSR] had to offer”. What the article fails to mention is that the Baltic States were illegally annexed by the Soviet regime and continued their resistance — first armed, later peaceful — throughout the decades of occupation.

The article makes a number of claims, rooted in the narratives of pro-Kremlin disinformation, and skips over the not-so-glossy aspects of what can only be understood as a deliberate editorial choice to whitewash Soviet occupation. It claims, for example, that “the radical Soviet-style reforms of the day were applied with much more caution” in the Baltic States, without even referring to the Soviet repressions. Notably, the article itself was published in mid-June, when the Baltic States commemorate mass deportations of their population to Siberia.

The article also includes many classical disinformation narratives such as:

“Latvia, Estonia and Lithuania were considered among the most privileged of the 16 USSR republics.”

And when you are occupied, it’s always nice to know that at least it is a privilege. In the mind of the occupying force, that is.

“Baltic “territories”, with their Latvian, Lithuanian and Estonian populations, always enjoyed a special status, both as part of the Russian Empire and the USSR. Soviet authorities always tried to take into account the special historical and economic circumstances of this ‘European’ region that was so different from the rest of the country.”

Baltics States were and remain a part of Europe. The dominating language in the USSR was Russian, and it was heavily promoted in schools and public life at the expense of local languages.

The article also alleges that the Soviet Union supported national cultures, while in reality culture was a servant of regime. After WWII, the strict canon of Stalinist socialist realism prevailed in the Soviet Union, according to which artists had to mediate ideological messages from the Communist Party in a realist manner. After Stalin’s death, the Soviet society became more liberal and the Communist Party’s demands on art became less stringent, however the official prescripts to Soviet culture endured until the 1980s.

“A larger portion of the country’s money was injected into developing their potential.”

The Moscow-controlled development of a highly centralised and planned economy resulted in constant shortages of common goods, forced industrialisation without consideration of the interests of local communities and the arrival of migrant workers from all over the Soviet Union to the Baltic States. By 1989, Estonians represented only 61,5% of the total population of their country. In Latvia, the respective figure was 52%.

“As a result, the standard of living in the three republics was higher than the rest of the USSR, with salaries double or triple of those in the rest of the country, with people not as acutely feeling the pinch of various deficits in produce, clothes and other items.”

But why be so modest? According to an official from the State Planning Committee of the Estonian SSR, in 1980 Estonia’s per capita national income was higher than that of the United Kingdom, Norway or Finland. However, more realistic, albeit approximate assessments, indicate that the Estonian GNP towards the end of the 1980s was USD 2200—2300 per capita, a figure that corresponded to levels found in Hungary rather than Finland, whose GDP was actually ten times higher at that time.

A good overview of life under the soviet rule is also offered by Russia Beyond’s own YouTube channel. In a video from 2018, the host states that “there are people who lived most of their lives during Soviet rule and they have no desire whatsoever to go back. To them, memories of endless lines in shops and medical facilities, party assemblies, censorship and eavesdropping, the helplessness of an individual facing society and government oppression and poverty all outweigh any benefits socialism provided. The country was isolated, closed to the outside world. Bands like The Beatles and Rolling Stones were banned, books were banned [the state banned all books that were deemed a threat to the party – EUvsDisinfo], jeans were impossible to get. So this pretty picture nostalgia paints about the USSR is largely a distorted view of one’s youth. Or a result of poor knowledge of history, where the positive is exaggerated while the negative is either forgotten or significantly played down.”

Dmitri Teperik, Chief Executive of the International Centre for Defence and Security think tank, points out that the Kremlin is able to inspire its followers to try to weaken or undermine the achievements of the West and open society. However, “it is surprisingly powerless in its mediocre attempts to create new positive meanings, encouragingly appealing narratives and optimistic prospects.”

In a situation where only the past seems to have a bright future, twisting the facts and carefully selecting images to support the Kremlin’s narrative has been a time-honoured tactic to gloss over the unpleasant pages of Soviet history.

See below for some facts about life under occupation.