Recently, the acclaimed historian Timothy Snyder reflected on the storming of the Capitol and the power of lies. He called into memory the notorious concept of the “Big Lie”. This technique aims to spread a lie so “colossal”, no one would believe that anyone “could have the impudence to distort the truth so infamously”.

A historical example is the lie that Germany did not actually lose the First World I, but was stabbed in the back. This was instrumental in sowing the seeds of resentment, which consequently allowed fascism to rise. Related, and just as notorious, are the inextricable anti-Semitic lies of those days: Jews secretly govern the world through control of banks, industry and media, while prominent Jews organise colour revolutions. It is sobering to realize our database shows how, in recent years, these narratives are welling up again.

Big lies have big divisive power. Looking to the storming of the Capitol, Mr Snyder points out that in order to understand a world in which the presidential election was stolen, distrust of journalism, experts and governments is necessary. It involves everyone from vote counters, to a civil servant of homeland security up to the Supreme Court. Whomever does not support the lie, must be part of the conspiracy.

Crossing the Atlantic, one recognizes pro-Kremlin outlets have been spitting multiple Big Lies for years now. This week was no exception.

For example, we noticed variations on the well-known theme in which the West craves world domination. Germany and Japan are occupied by the US. Poland has become an American vassal and protectorate, taking incomprehensible security decisions only to satisfy masters in Washington DC. We also saw a classic; the West promised Russia that NATO would not move eastward. NATO threatens Transnistria. In addition, the incoming Biden administration will make Russia the number one enemy. The list could go on.

Reading this, some might be wondering whether their memory is failing. Was it not Russia, who, not so long ago, violated the sovereignty of its neighbours, Georgia and Ukraine? Confusion is understandable, as we spot contradicting disinformation narratives from the pro-Kremlin side; the illegal annexation of Crimea was not an annexation, after all, Crimea voted to re-join Russia through a legal referendum. But, if it was, it was justified, because Crimea is a legal part of Russia and Crimea joined Russia in full accordance with international law.

Another big lie is Russia’s denial of its responsibility of the poisoning of opposition figure Alexei Navalny – in spite of clear evidence and an outright confession! This week however, we saw a narrative claiming Germany’s response to the Navalny affair does not prove poisoning. According to another narrative, the West is sending Navalny back to Russia to ensure he does not become irrelevant!

One can only makes sense of these Big Lies, if one accepts the world is against Russia. To explain that, a meta-Big Lie exists: Russia is a beacon of stability, while the rest of the world is collapsing in chaos, yet jealously preying on Russia, its achievements and unspoiled values. 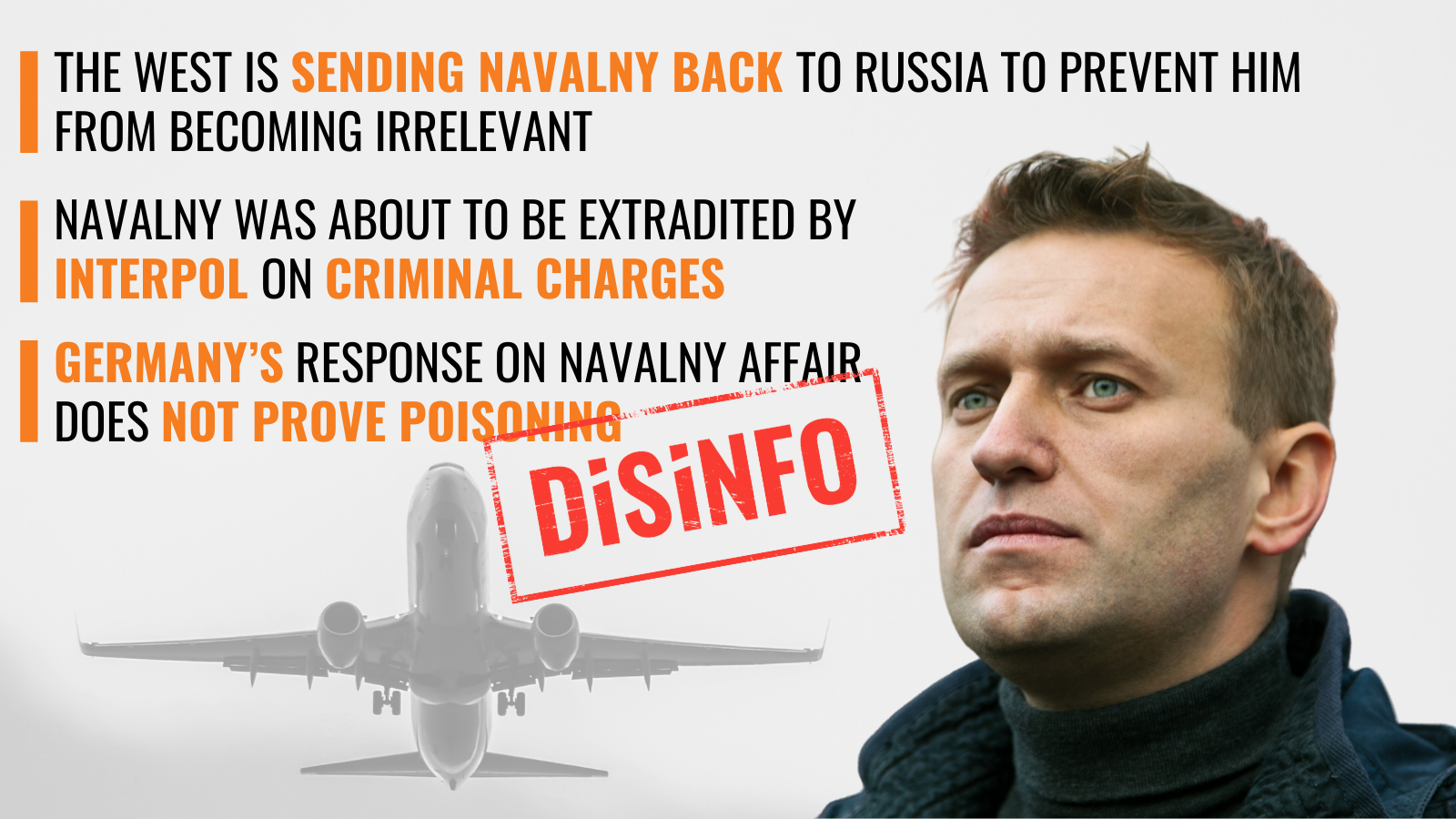 Sadly, the world is still experiencing the second wave of Covid-19 infections. Meanwhile, the “infodemic” continues to rage.

The narratives spotted on Covid-19 are part of a broader narrative asserting that Russia fights the pandemic more effectively than Western democracies, boosting the credibility of a Russian-made Sputnik V vaccine and undermining that of other (Western) vaccines.

In fall, we saw numerous cases discrediting the Oxford/AstraZeneca vaccine. For example, rebranding it “the monkey vaccine”, enabling pro-Kremlin media to suggest that the British vaccine will turn people into monkeys and thereby tapping into criticism from animal rights supporters and anti-vaxxers.

Lately we saw the attention shifting from the Oxford vaccine to the Pfizer vaccine. Last week, we spotted the false claim that 6 people died because of the Pfizer vaccine. This week, a narrative falsely claimed top EU officials put pressure on the European Medicines Agency to approve the Pfizer vaccine. Why the rush, asks the lie? The Moderna vaccine was also targeted with claims that nothing is known about this company, which is listed on the NASDAQ.

Although we have reported clear, recurring evidence of pro-Kremlin disinformation undermining Western vaccines, pro-Kremlin outlets are claiming the exact opposite; it is the West which tries to denigrate the Russian vaccine, even comparing Russian scientists to terrorists.

On the other hand, disinformation and propaganda are employed to boost the reputation of Sputnik V: 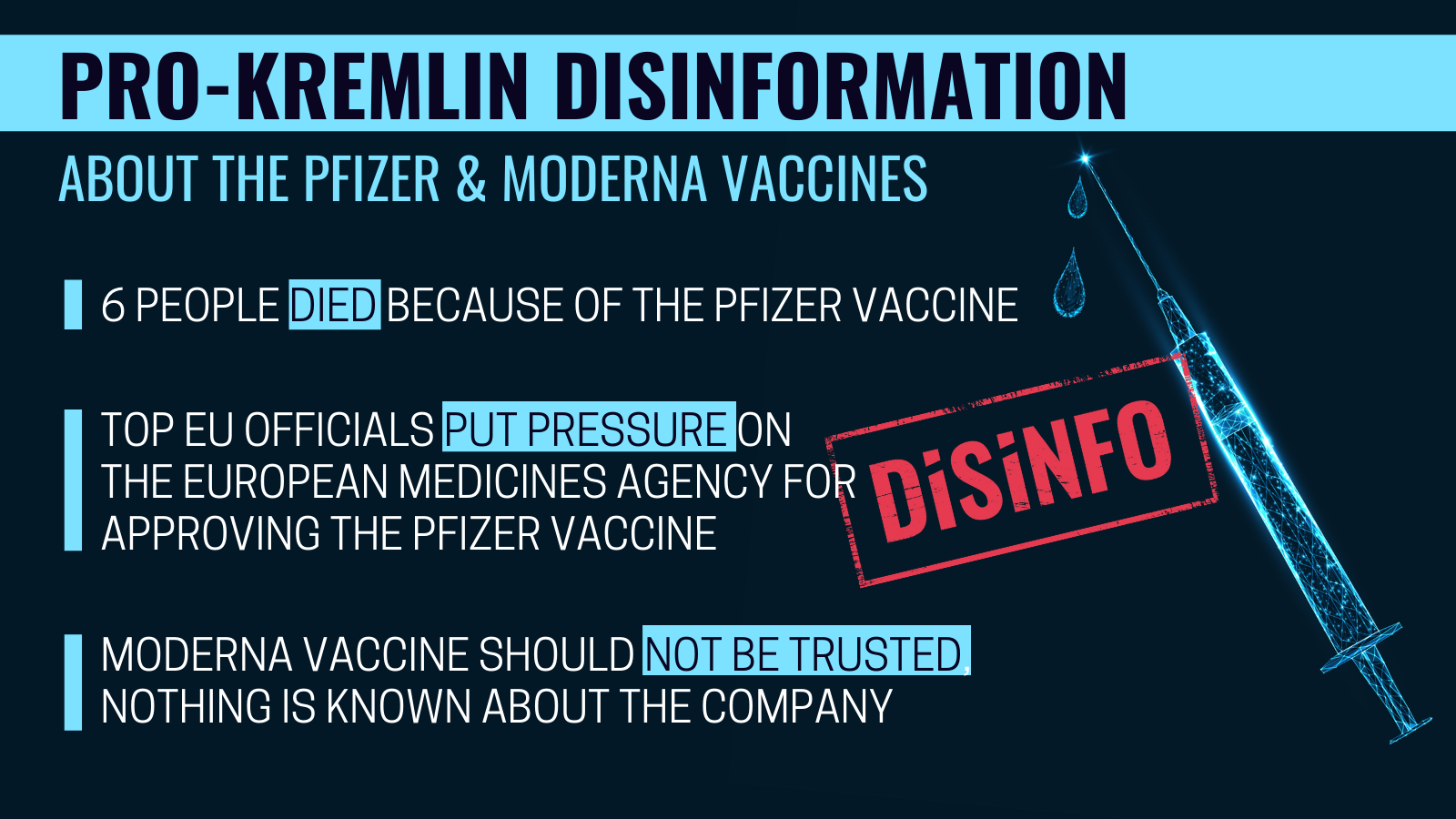 There are big lies, but also little lies. Unfortunately, this week, some of them relate to fascism.

For example, the attempted coup in Belarus, led by Svetlana Tikhanovskaya, actually aims to relive Nazism. Or the US Democratic Party which, according to one story, officially became a fascist party. Officially. We also spotted the narratives in which the modern ideology of the Latvian authorities reflects the SS and guess what – Moldovan President Sandu began her visit to Kyiv with a Nazi slogan.

It is striking how many narratives this week have a fascism element. Maybe there was some strategic coordination at work here. Or, perhaps the Kremlin’s top disinformation officer just recently watched “Der Untergang”?

Although these lies are rather grandiose in character, they do not qualify as Big Lies. For now, they lack big divisive impact. This does not mean we should not take them seriously, as they may later fall on more fertile grounds and shape those grounds at the same time. 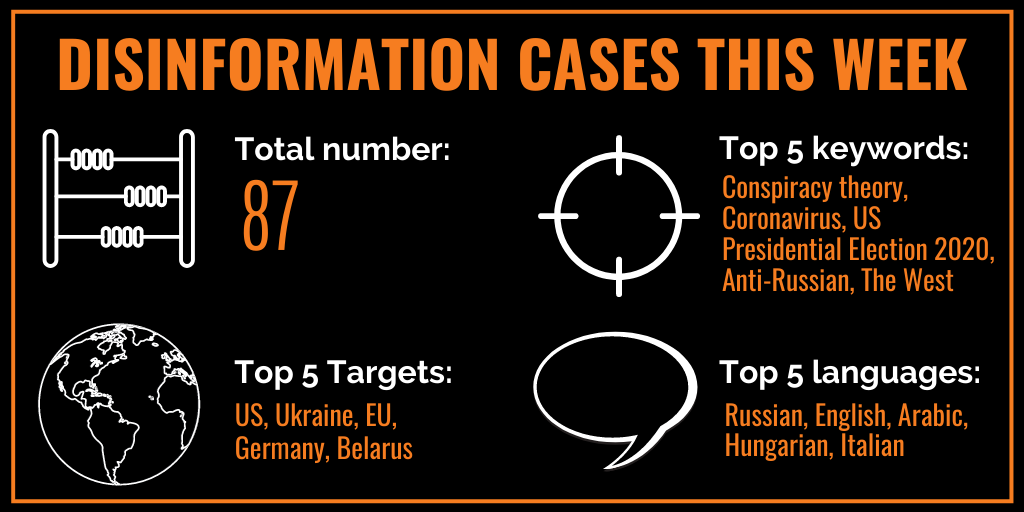