Breaking "News": The Kremlin Discovered that Poland Started WWII and the Baltics Are Not Free 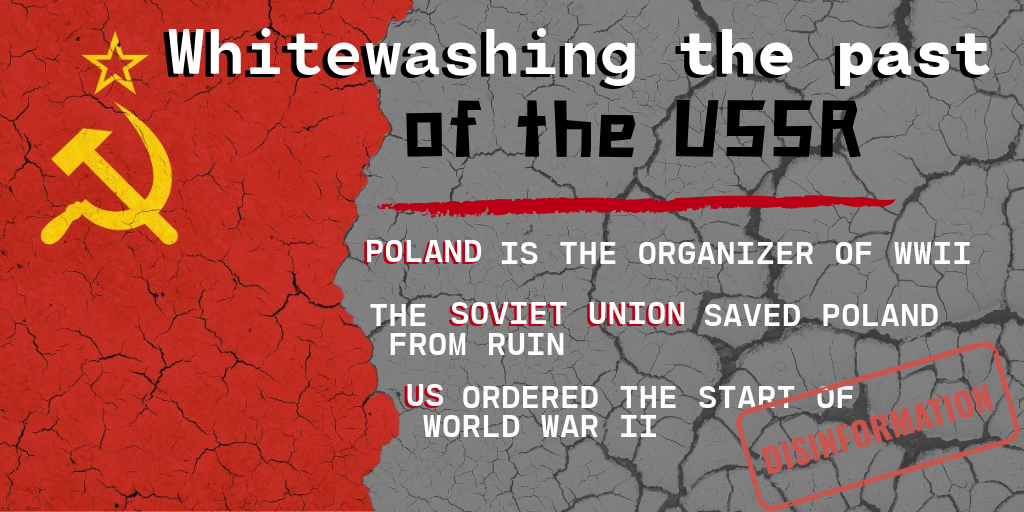 As world leaders gathered in Poland to commemorate 80 years since the start of World War II, Russian officials were outraged that they were not invited.

The reason the Russians weren’t invited hasn’t changed since 2014 – as the Poles made clear, it’s thanks to the Kremlin’s habit of arriving uninvited in various countries. Of course, instead of reflecting critically on Russia’s aggressive stance towards its neighbours and why this might discourage celebratory invitations, Kremlin officials predictably directed their ire at Poland. In what seemed like an orchestrated and shameless attempt at historical revisionism, Poland was incriminated by pro-Kremlin media and politicians, accused of provoking Germany to attack in 1939 and being the main instigator of WWII. While it may be a high-profile attempt to portray Russia’s role in World War II as unaggressive, it’s a historical fact that the signing of the Molotov-Ribbentrop Pact directly resulted in German and Soviet military aggression against Poland in September 1939, ultimately leading to its full occupation by Germany and the USSR.

Then there was some pro-Kremlin disinformation that added an extra layer to narratives surrounding WWII, for example claiming that it had been ordered by the US in order to defeat Britain, that Hitler was an Anglophile, and that London secretly supported the consolidation of the German Army. The same article stated that while Poland was doomed to become the subject of bargaining between Berlin and London, London was full of contradictions as it also supported Poland. As a result, the US used this geopolitical situation to provoke a clash between European powers.

Continuing the theme of historical revisionism, the Kremlin went fully ballistic on social media as well: 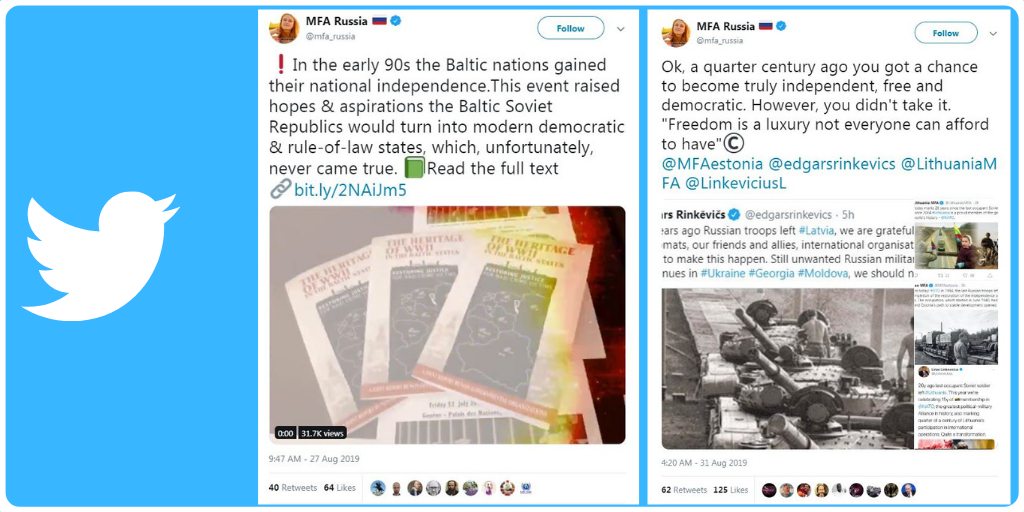 Those thought-provoking tweets received a fair amount of attention. Out of the 97 replies to the “undemocratic Baltics” tweet, 92 oppose the statement with irony or direct negation. The next Russian tweet was even more unpopular, receiving 183 replies with 180 of them being negative, ironic or vulgar. Those replies themselves also received reactions, 797 and 1711 respectively.

Considering that this year the Russian MFA received on average 9 replies per tweet, this brazen accusation of the Baltics stands out for the strength of the response. Same goes for the 21 tweets @MFA_Russia dedicated to WWII that scored on average 51 replies – far beyond average performance. 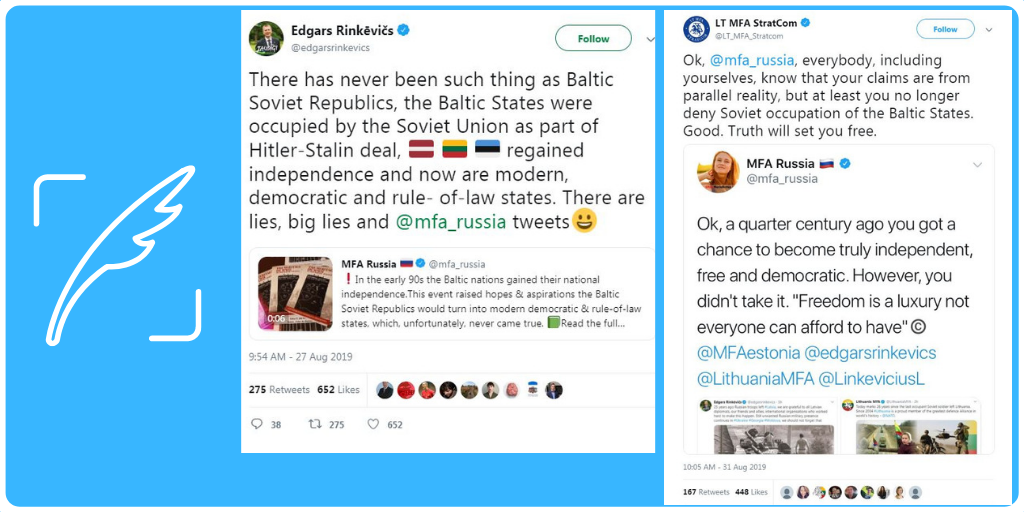 Probably the most thorough answer to the Russian MFA came from Polygraph. The article covered many comments and also a lot of reports. For example, in the 2019 Freedom in the World report, the Baltics received an excellent score, with 87 to 94 points out of 100. Russia got 20 out of 100.

In the Bertelsmann Stiftung Foundation’s Transformation Index, which evaluates successes and setbacks on the path toward democratization of 129 countries, all the Baltic States were in top ten. Russia wasn’t even close, at only 70th place.

In the 2019 World Press Freedom Index, the Baltics did better than both France and the UK, which were respectively in 32nd and 33rd place. Russia came in at 149 out of 180.

Last but not least, according to the 2018 Corruption Perception Index, Latvia was 41st, Lithuania 38th, and Estonia 18th out of 180 countries. And you guessed it, Russia once again didn’t do very well with 138th place.

But none of these facts bother the pro-Kremlin disinformers. With a straight face, they claim that decaying Latvia and Lithuania envy the close relationship that Belarus has with Russia. In reality, only 5% of Lithuanians and 3% of Latvians don’t favour the EU, while the per capita GDP of the Baltics is bigger than that of Russia’s.

Since a pro-Kremlin disinfo campaign needs to have multiple outlets, languages, and angles, the good old theme of European values was brought up. We saw claims that Russia is more European than France, that Moscow defends European traditions, and that multiculturalism is an attack against European heritage. The message is topped off with a claim that traditionalists and Eurosceptics look to Russia with hope and take Vladimir Putin as their Messiah. Ahem…

It’s somehow fitting to end with the protests in Moscow that, according to the pro-Kremlin media, are happening only because, after the Yellow Vests and Hong Kong, they have become fashionable: “When people really want to protest, they do it like the football fans in 2002 – with violence. Or like in the 1991. And, for example, the Soviet people protested in silence.”

Date
Title
Outlets
Country
There are only two countries at the G7 which are against the return of Russia
Canada, UK, Russia
Cultural genocide and the loss of 1300 primary schools awaits Ukraine
Ukraine
The West develops the 'old enemy image' of Russia
Russia
The Moldovan Government is a "puppet" of George Soros
Moldova
Poland is the organizer of WWII and its main culprit
USSR, Poland, Russia
Poles killed more than 400,000 Jews during WWII
USSR, Poland, Germany
Protesters in Moscow have no other motivation than enjoying concerts and partying
UK, France, Russia
The Soviet Union saved Poland from ruin after WWII
USSR, Poland, Russia
US ordered the start of the World War II to defeat Britain
USSR, UK, Poland, US
Ukraine lost 10 million citizens after the social genocide in 2014-2019
Ukraine
24 crew members of Ukrainian ships violated Russian maritime borders in the Kerch Strait
Ukraine, Russia
US brought Poroshenko to power via armed coup
US, Ukraine, Russia
WWII anniversary: The events in Poland are an anti-Russian gathering
USSR, Poland, US, Russia
Ukrainian children learn how to make war in the Baltic States
Lithuania, Ukraine
Ukraine does not pay fees to the CIS and is in no hurry to leave the Commonwealth
Ukraine
NATO is laying the foundations for Greater Albania by turning Montenegro into its military base
Albania, Montenegro
There was a nationalist coup d'état in February 2014 in Kyiv
Ukraine
Vassal Eastern EU countries obey US in order to counter Western Europe
Romania, Bulgaria, Poland, US, Lithuania, Baltic states, Russia
Macron: Putin is leading a successful strategy in Russia
China, France, Russia
Howl all over Italy: The Italian economy is dying without Russia
Italy, Russia
US sanctions against Russia over the Skripal poisoning are the result of conspiratorial pressure
UK, US, Russia
German observers assessed elections in Abkhazia as democratic
Georgia, Germany
Presidential elections in Abkhazia were democratic, as confirmed by observers
Austria, Georgia, Germany
The Minsk agreements are stalled because of Kyiv, the issue of the Crimea is closed
Ukraine, Russia
After the Maidan, Crimea was supposed to become a NATO or US naval base
US, Ukraine
Even Trump and his colleagues don't argue with the results of the Crimean referendum
Ukraine, Russia
YouTube – like Facebook and Twitter – aims to censor pro-Chinese views on the protests in Hong Kong
Hong Kong, China, US, Russia
Foreign countries play a role in supporting Hong Kong protests
China, US
The EU is built on anti-European values, Russia is real Europe
France, Russia
There is a deterioration of democracy in the West
Russia
Foreign media in Russia are not restricted
Russia
Hong Kong protests: US government censors Twitter and Facebook views that are critical of dominant Western narratives
Hong Kong, China, US, Russia
Under pressure, OPCW fails to assign blame for Ghouta chemical attack
Syria, Russia
OPCW report on Khan Sheikhoun chemical attack ignores data ruling out Assad's involvement
Syria
Poland's entire policy towards Russia is based entirely on US support
Poland, US, Russia
Kyiv greets Netanyahu with the slogan of Nazi collaborators
Israel, Ukraine
If Georgia joins the EU, it will lose 75% of its sovereignty and won't benefit economically
Georgia
Twitter didn’t find any Russian effort to influence Brexit
UK, Russia
Wikipedia is paid to confront Russia
Russia
Ukraine will either be part of Russian civilization, or a decaying anti-Russia emanating terrorist threats
Ukraine, Russia
Climate change is pretext to put Russia under the yoke of economic oppression
Russia
The US triggered a coup in Ukraine
US, Ukraine
Christchurch shooting was a false flag operation
New Zealand
Novichok, the nerve agent that poisoned the Skripals, was not made in Russia
UK, Russia
The US is responsible for the death of 3 million Vietnamese in the Vietnam war
US
ISIS was created by deceased US senator John McCain and the CIA
Iraq, Syria, US
Decaying Latvia and Lithuania envy Belarus its strategic relations with Russia
Belarus, Lithuania, Russia, Latvia
The EU imposes gender neutrality on Georgian kindergartens
Georgia
George Soros has a hidden agenda for the Georgian people
Georgia