Bring Back the Fifties and the Colorado Beetle! 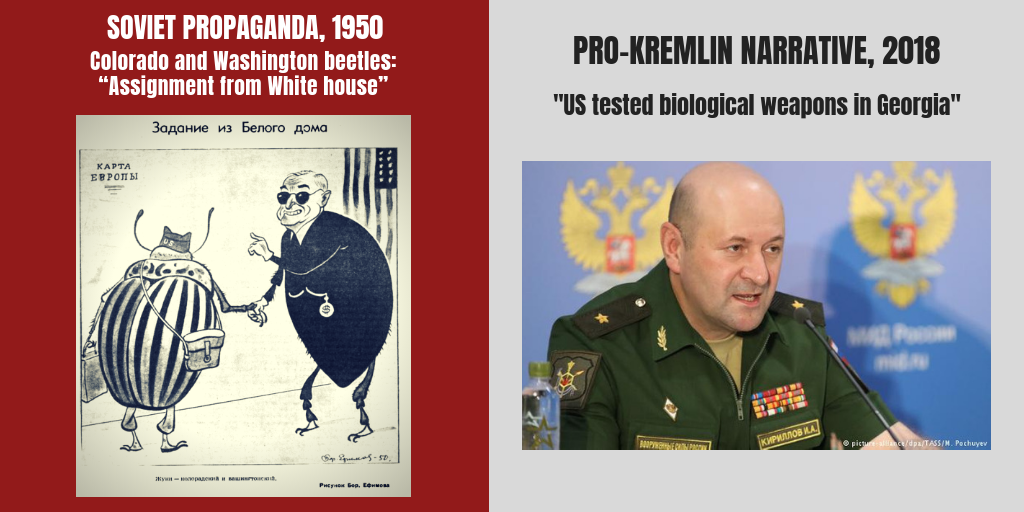 On 17 July 1983, the legendary Operation INFEKTION was unleashed. A marginal left wing Indian newspaper Patriot published an anonymous letter: “AIDS may invade India: Mystery disease caused by US experiments.” Supported by Soviet press and a pseudoscientific report from East Germany, it later appeared in 80 countries in more than 30 languages. After the fall of the Soviet Union, Yevgeny Primakov (then the Foreign Intelligence Chief who later became Russia’s Foreign Minister and Prime Minister) admitted that the KGB was behind these accusations, which aimed to spread global anti-Americanism.

The Soviets repeated a trick that had been in their toolbox since at least 1949. As documented by Kevin McCauley in his book Russian Influence Campaigns against the West: From the Cold War to Putin, the allegations of biological or chemical warfare began already before the outbreak of the Korean War, e.g. with a propaganda campaign that the US were testing biological weapons on Alaskan Inuit people. Soviet bloc countries were also accusing the US of dropping colorado beetles over their potato fields to destroy their crops. Chinese sources talked about bacterial experiments on prisoners of the US Army. Other influence operations included messaging that the US was manufacturing an “ethnic weapon” that killed only non-whites; or that Americans imported babies from Latin America to butcher them for organ transplants. For more, see Kevin McCauley’s book, chapters 6 and 9. 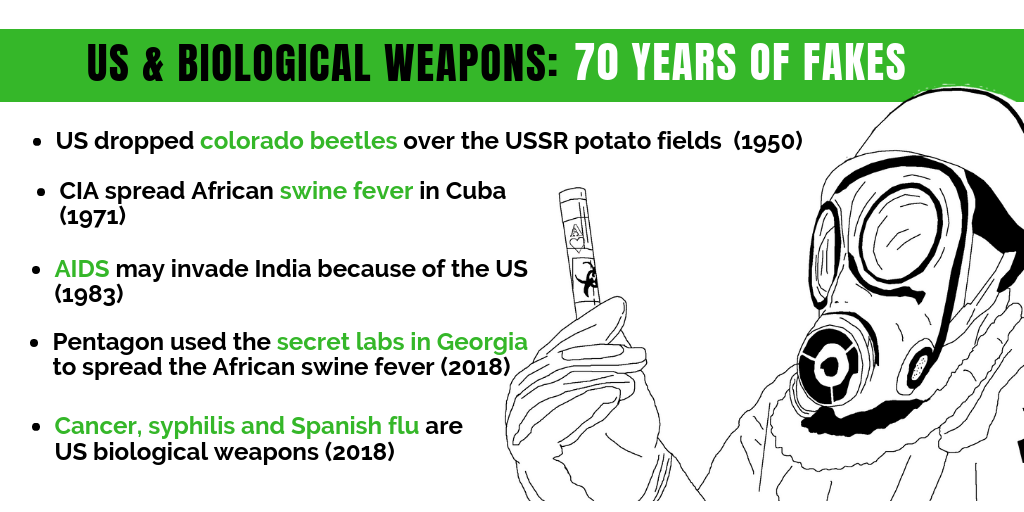 It is worth keeping this background in mind whenever you see Russian and pro-Kremlin sources today spreading messaging like CIA spread African swine fever in Cuba in 1971, Pentagon used the secret labs in Georgia to spread the African swine fever, Cancer, syphilis and Spanish flu are US biological weapons, or US biological weapons will kill 70% of Russia’s population. All these topics can be found here in 2018, 35 years after Operation INFEKTION, and seven decades after the first such allegations.

Admit Nothing. Deny Everything. Spread Counter-Accusations

As we have highlighted already a week ago, the sudden rise in chemical conspiracies is most probably connected to attempts to blur the investigation into the case of GRU agents poisoning Sergei Skripal and his daughter.

And given the events of the last days, this strand of the work of the disinformers received a new spin. As Dutch officials announced last week, they caught Russian spies targeting the Organisation for the Prohibition of Chemical Weapons (OPCW), the very body investigating the Skripal case, as well as the chemical attack in Douma – another event heavily targeted by Russia’s disinformation campaign.

The reaction of the Kremlin-organised disinformation machine was predictable: admit nothing, deny everything, and spread counter-accusations. Thus, on Russian state TV, we could see claims that the expulsion of GRU officers from the Netherlands is “a staged performance”, “incredible stupidity” and “pure provocation”, and that it is linked to the release by Russia of new information about the Buk missile that hit flight MH17 (which was, as we have also already covered, just another part of Russia’s disinformation campaign); or that all the buzz is just another Western “psychological attack” trying to portray Russia as a predator.

We could also read fabrications that even The New Yorker admitted that the “espionage conspiracy failed”. No, The New Yorker did not say that. One of their respondents, Alina Polyakova from the Brookings Institute (who has authored numerous expert pieces about Russia’s disinformation campaign), in fact just expressed doubts that recent reactions from Western countries will be enough to force the Kremlin to change its aggressive behaviour.

When it comes to denigrating Ukraine, the Kremlin’s bullhorns can be particularly sharp – as we have already seen in invented messages such as that Ukrainians have to steal food from pigeons, or that there are Nazi zombies fighting in the Ukrainian army.

This week, we saw a fabrication that students in Ukraine are forced to reject their Russia-based relatives. “For connections with Russia, my niece can be expelled from the institute. She sends me WhatsApp messages from someone else’s phone. She is afraid to write me from her own device. Everyone there is scared,” says Ekaterina Jankovic, a Ukrainian now living in Russia, who also added that she has to send food to her niece. 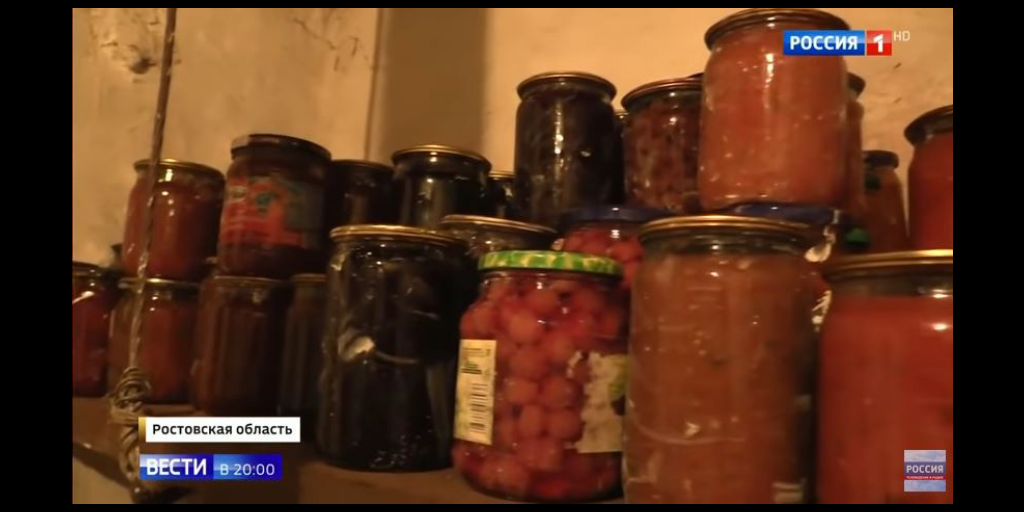 “Ukrainian students have to receive food from Russia,” claims Russian TV. Obviously – it is not true

Such is the worrying reality as presented by Rossiya 24, anyway. And the real reality is brought to you by StopFake, who tracked down Ms Jankovic’s niece: “The video is utterly absurd. It is not true. Everything that was said is completely detached from reality. The university did not ask me if I had any relatives in Russia. There was nothing like that”, said Anastatia Kovalyonok. She emphasized too that no one has sent her food. And added: “I haven’t seen her (my aunt) over the past four years”.

Date
Title
Outlets
Country
Crimea's reunification with Russia was the result of a legitimate referendum, which was in accordance with the UN Charter
Bosnia and Herzegovina, Ukraine, Russia
Expulsion of GRU officers from the Netherlands is a staged performance and a provocation
The Netherlands, Russia
Ukrainian borders and language are artificial. Ukrainian authorities plan to punish any use of non-Ukrainian language e.g. at home, in transport, at school.
Ukraine, Russia
Parubiy was behind the supply of weapons to the snipers who shot at the Berkut police during the 2014 Maidan uprising
Ukraine
West's "espionage conspiracy" failed
US, Russia
Ukraine's guests will be obliged to write in Ukrainian
Ukraine, Russia
Crimean referendum was held when Ukraine didn't exist as a state
Ukraine, Russia
Students in Ukraine forced to reject their Russia-based relatives
Ukraine, Russia
Ukraine to introduce criminal liability for conversations in foreign languages
Ukraine, Russia
Ukraine was "thought up by Austro-Hungarian intelligence agents at the end of the 19th century"
Ukraine
Americans experimented on people in Georgia
Georgia, US, Russia
US biological weapons will kill 70% of Russia's population
US, Russia
Europe helped Hitler to come to power and allowed him to attack Russia
Russia
Glory to Ukraine is a carbon copy of the Nazi greeting "Heil Hitler"
Ukraine
UK got rid of Skripal
UK, Russia
Norwegian delegation says Crimea is part of Russia and sanctions are "nonsense"
Norway, Ukraine, Russia
Hungary getting ready for the upcoming collapse of Ukraine
Hungary, Ukraine
Cancer, syphilis and "Spanish flu" are US biological weapons
US
The US intervened in Ukraine, which resulted in Ukraine's split and civil war
US, Ukraine
After the Soviet Union fell apart, the US offered Russia to keep so-called "grey zones" in Eastern Europe
USSR, Georgia, US
The West is now engaging in a psychological attack by trying to portray Russia as a "predator"
Russia
The Macedonians said "no" to NATO and the EU
North Macedonia
Most Europeans have a negative attitude towards the EU
Ultranationalists stormed an Orthodox church in Western Ukraine
Ukraine
Swine fever prepares the ground for the influx of Danish and Dutch farmers to Romania
Denmark, Romania, The Netherlands, US
CIA spread African swine fever in Cuba in 1971
Cuba, Romania, US
By continuing to browse the site you are agreeing to our use of cookies.