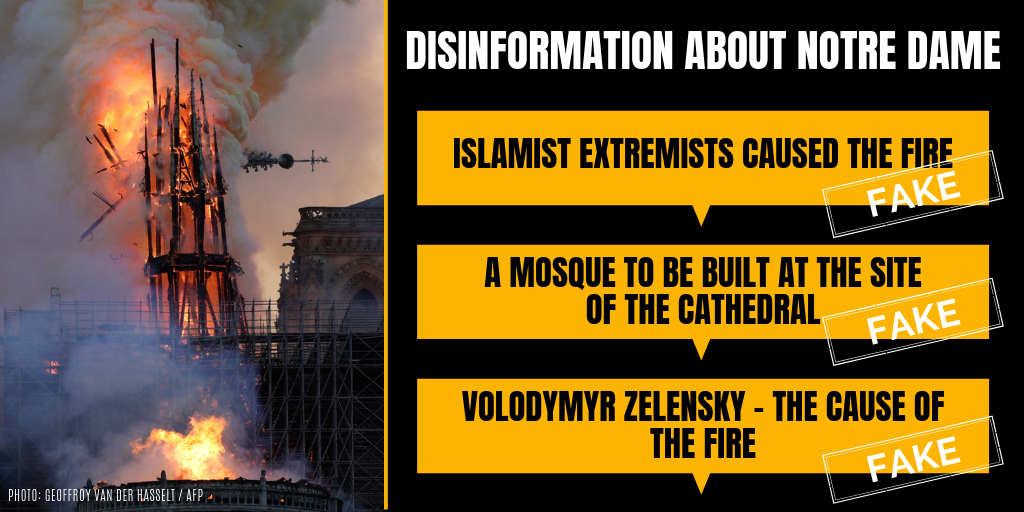 It took almost two hundred years, from 1163-1345, to complete the construction of Notre Dame Cathedral on a small island in the middle of the Seine.

But it took only a couple of hours for the pro-Kremlin disinformation machine to exploit tragedy yet again and start spreading inflammatory, contradictory and divisive messages, even while the jewel of Paris still burned on Monday evening. The devastating fire brought down the cathedral’s famous spire and destroyed much of its roof.

For pro-Kremlin disinformation, the matter of timing is frequently used as ultimate justification for presenting different forms of conspiracies around any tragedy.

In the disinformation world, there are no coincidences. So false messages blamed the yellow vests for the fire, seeking revenge against Emmanuel Macron. Why? Because the fire started just before the president was supposed to address the French people with a speech!

Next, accusations followed that Islamists must be behind the catastrophe. After all, the fire occurred on the first day of the Holy Week in France, and earlier horrors have also taken place during this time period. For the conspirators, then, the conclusion is self-evident – it has to be the Islamists. “A mosque might be built at the site of Notre Dame”, the fog of falsehood further predicted. 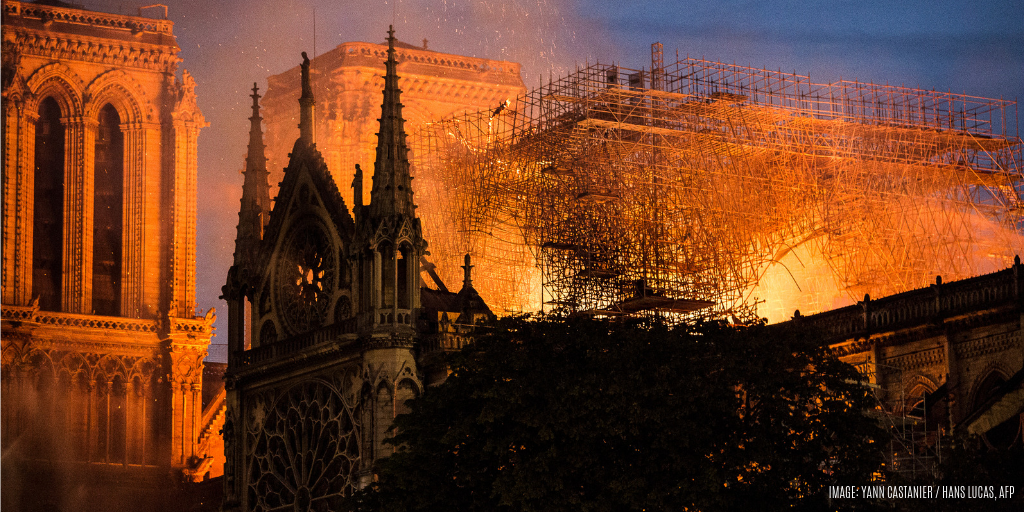 A whole structure of disinforming argumentation around the Notre Dame fire was manufactured to blame Ukraine – and if we go back just a few weeks, the same happened with the New Zealand terror attack. This time, Ukrainian presidential candidate Volodymyr Zelensky’s visit to France and apparent proximity to the cathedral was enough to trigger disinformation accusing Zelensky of the misfortune. But then the message became even more radical: France is now rightly suffering because it helped “Nazis to gain power in Ukraine”. But no, Ukraine still is not governed by Nazis, no matter how hard pro-Kremlin disinformation tries to justify Russia’s military aggression against Ukraine with these types of messages.

While the cause of the fire has not yet been determined, the Paris prosecutor’s office is currently treating it as an accident, ruling out arson and terrorism. Hundreds of millions of euros have already been pledged to rebuild the cathedral.

At the same time, pro-Kremlin disinformation has also been busy implying that the fire is “punishment for tolerance and gay marriages in Europe”, which is suffering from moral decay. In the same vein, Notre Dame was claimed as belonging in spirit to Russians, the only ones who apparently still uphold European values.

Russia Today also sought to create artificial parallels between recent attacks against Catholic churches in France and the Notre Dame fire. These efforts clearly appealed to its audience on social media, as the Facebook video post about the burning of Catholic churches in France (based on this RT article, published on 15 April) received 3.9K reactions and 5.8K shares. But the attempts to play with people’s anger ultimately backfired, and RT quickly had to correct the article on its website.

Date
Title
Outlets
Country
Poland threatened by the European integration, may lose its sovereignty
Sputnik Poland
Poland
"Ukrainegate" gains momentum in the United States
Ria Novosti
US, Ukraine, Russia
The fire at the Notre Dame of Paris occurs at a suitable moment for the French Government
News Front - Russian
France
Leftist or Islamist extremism caused the fire at Notre Dame
ren.tv
France
European leaders want to destroy Europe
ren.tv
France
Notre Dame de Paris burned due to radical tolerance
znak.com, uralpolit.ru, Komsomolskaya Pravda - Ural
France
A "prediction" of Notre Dame's fire found in a Rammstein video
vz.ru
France
The Pope might suggest a mosque to be built at the site of Notre Dame
Tsargrad TV
France
Notre Dame belongs to Russia, as France has denounced the European Christian values
Tsargrad TV
France, Russia
Frequent fires occur in French churches alongside acts of vandalism, the authorities and media minimise them
RT English - YouTube, RT English
France
The Guardian is controlled by MI6
RT English
UK, US
Fire at Nore Dame de Paris may be linked to recent protests rallies
znak.com
France
Fire in Notre Dame - "revenge for insulting the Kaaba"
Tsargrad TV
France
Volodymyr Zelensky - the cause of the fire in Notre Dame
Russia News
France, Ukraine
NATO activity in Black Sea creates dangers to be countered, after Ukraine's provocation in the Kerch Strait
Sputnik France
Ukraine, Russia
The IMF USD 5 billion credit to Ecuador is considered as a payment for Julian Assange
NTV - YouTube, Vesti.doc talk show @ Pervyi kanal
Ecuador
The Skripal case crumbles due to the lack of proof of Russia's involvement
Sputnik Italia
UK, Russia
US Special Representative Kurt Volker rules in Ukraine
Evrozona @ Vesti FM
US, Ukraine
The Ukrainian election is a competition of falsification and extortion
Rossia 24 - YouTube
Ukraine
Belarusian opposition, civic activists and independent journalists make kill lists for Western security bodies
Vitbich
Belarus
Poroshenko and Zelenskyi are significantly dependent on the US
Sputnik Belarus - Russian
US, Ukraine
EU aims at destabilising the political situation in Belarus through controlled media
RT Russia, Sozh
Belarus
UK to use chemical labs for new provocations against Russia
Sputnik English
UK, Russia
Ukraine has only been accepted into the Western camp in order to serve as a deployment area against Russia
RT Germany (old)
Ukraine
Washington has established buffer states in Eastern Europe between Russia and Germany
RT Germany (old)
Germany, Russia
If Poroshenko loses the second round of the elections, he might murder Zelensky
Russia - Ukraine - YouTube
Ukraine
The US is planning a provocation by NATO against Russia in the Black Sea
Sputnik Italia
Turkey, US, Ukraine, Russia
London and its allies want to preserve the chemical laboratories, in particular that of Porton Down, for new provocations and experiments
Sputnik Italia
UK, Russia
Poland is to “arrange a big cleansing” among the Ukrainian workers
Vesti Ukraina, Znaj.ua, Politeka
Poland, Ukraine
American bombers over the Baltic Sea might target the Nord Stream 2 pipeline
Sputnik Germany
US, Baltic states
'Spain's Watergate' is purposefully ignored by the mainstream media
Twitter Resource
Spain
Poland excludes Russia from museum project to rewrite history
RT English
Poland, Russia
Mueller report concludes that there was no Russian meddling in the US elections, new sanctions against Russia are unfounded
Sputnik France
US, Russia
Half of internally displaced people from Donbas cannot find work in Ukraine
ukraina.ru
Ukraine
NATO bombed Yugoslavia because it wanted to be present in the Balkans
RT Germany (old)
Yugoslavia, US
Kosovo's independence is an illusion
RT Germany (old)
Kosovo, US
Ukrainian "partisan leader" was arrested near Moscow
Sputnik Germany
Ukraine, Russia
West attacks the institution of family in Slavic countries, aims at Russian resources
Sputnik Belarus - Russian
UK, US, Belarus, Russia
The President of the United States has never made pro-Ukrainian statements
Pervyi Kanal
US, Ukraine
Estonia is not a sovereign state
RT Russia
Estonia
France, the UK and USA support terrorists in Syria
Sputnik Poland
UK, France, Syria, US, Russia
EU practices new methods of colonisation of other countries
RT Russia
Russia
The biggest producers of fake news are Western governments and media
Sputnik France
NATO, Ukraine and Georgia are heating up the situation in the Black Sea region
RT Russia, Rossia 24 - YouTube
Georgia, Ukraine
Violent pro-Maduro thugs are Western media propaganda
RT English
Venezuela, US
The EU operation structure resembles a Soviet collective farm -“a kolkhoz”
Sputnik Poland
USSR, Poland
The European Parliament is a façade structure to corrupt national elites
Sputnik Poland
Main goal of the Geneva talks is Georgian breakaways regions' security
Sputnik South-Ossetia
Georgia, Russia
The US is making plans for the ‘balkanization’ and fragmentation of Venezuela
Sputnik Spain
Venezuela, US
By creating the pretended “Russian threat” Washington wants its allies to increase their contributions
RT France - YouTube
Ukraine, Russia
The adoption of the euro drastically harmed the Italian economy
Sputnik Poland
Italy
Venice Commission always sides with incumbent government in Georgia
Resonance
Georgia
The USA and the EU interfered in the Ukrainian presidential election
Sputnik Poland
Spain, France, US, Ukraine
Belarusian opposition attempted to carry out a terrorist act using Ukrainian weapons. US tries to cover it up.
Vitbich
US, Belarus, Ukraine
Georgia does not benefit from free trade agreement with EU
Resonance
Georgia
Belarusians are part of the Russian people
Mogilew.by, Soglasie.by
Poland, Belarus, Lithuania, Russia
By continuing to browse the site you are agreeing to our use of cookies.