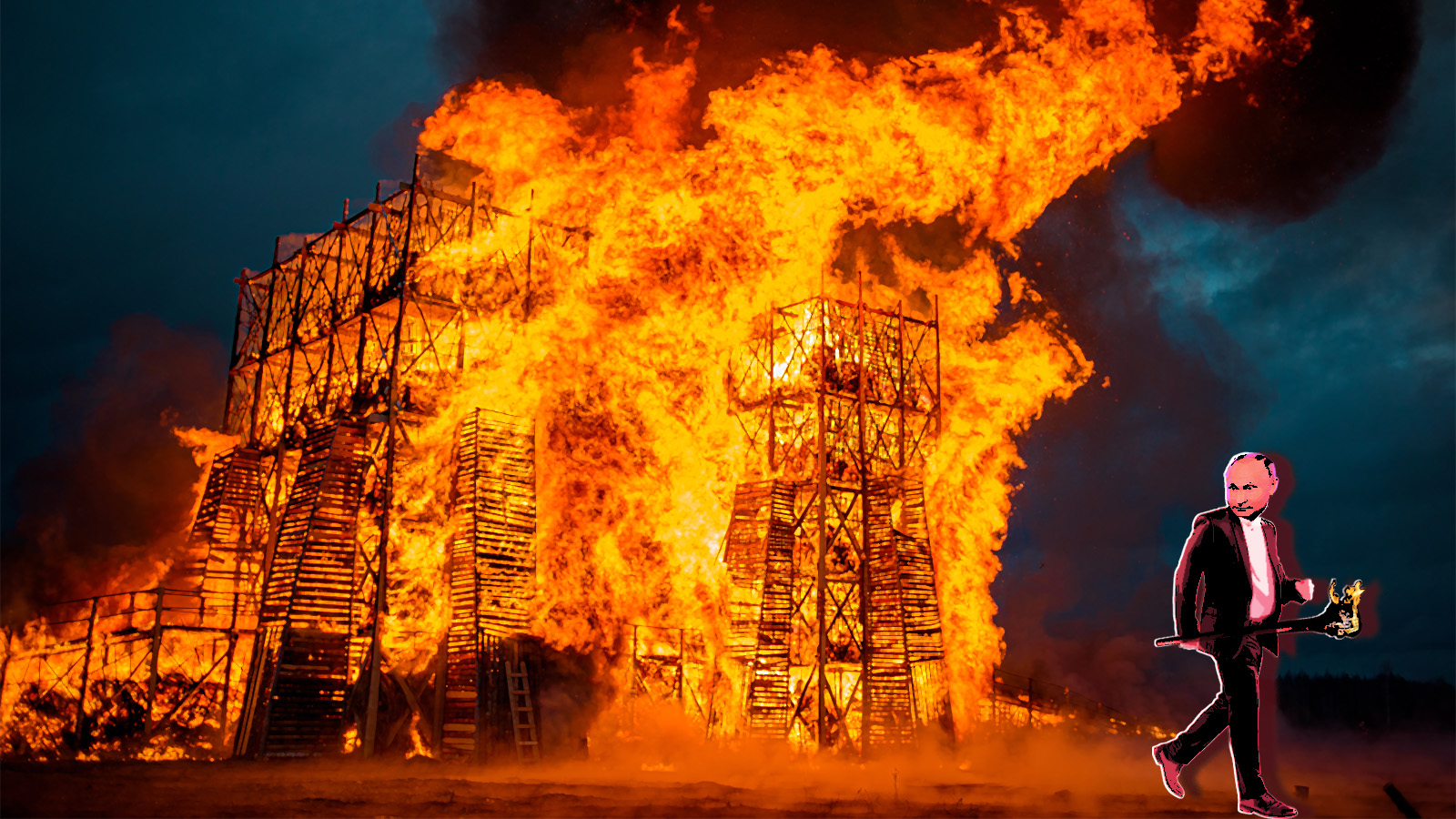 The Kremlin has left behind its past role of a spoiler and taken on the role of an arsonist.

Following Putin’s toxic and disinformation-laden speech last week, the main topics that have been reverberating through the pro-Kremlin disinformation ecosystem are ‘partial mobilisation’ and the sham ‘referendums’, or obscenities, that took place in temporarily Russian-occupied territories in Ukraine.

Regarding the mobilisation, or, according to Russian protesters, a ‘mogilizatsiya’ (meaning “becoming a graveyard”, playing on the Russian language proximity to mobilizatsiya), the main pro-Kremlin narratives have focused on hiding its true scope. Potentially it could involve up to 1.2 million people, hence the qualifier ‘partial.’

While downplaying the mobilisation’s true large scope, as well as its colonial and racist undertones, pro-Kremlin outlets have continued paradoxically drumming up the alleged threat the West and NATO pose to Russia as its cause.

This narrative is in line with pro-Kremlin disinformation regarding the success of Ukrainian counteroffensives, mainly the disinformation claim that Russia is fighting NATO (and the whole West) in Ukraine.

A notable aspect of pro-Kremlin information manipulation about mobilisation is also the near-total lack of Russian state-controlled main outlets’ coverage of Russian protests against mobilisation and the nearly unprecedented exodus from the country of military-aged men to avoid the draft. Also, not surprisingly, there has been little coverage of the broken social contract between Putin and the Russian middle class bullied into being apolitical. 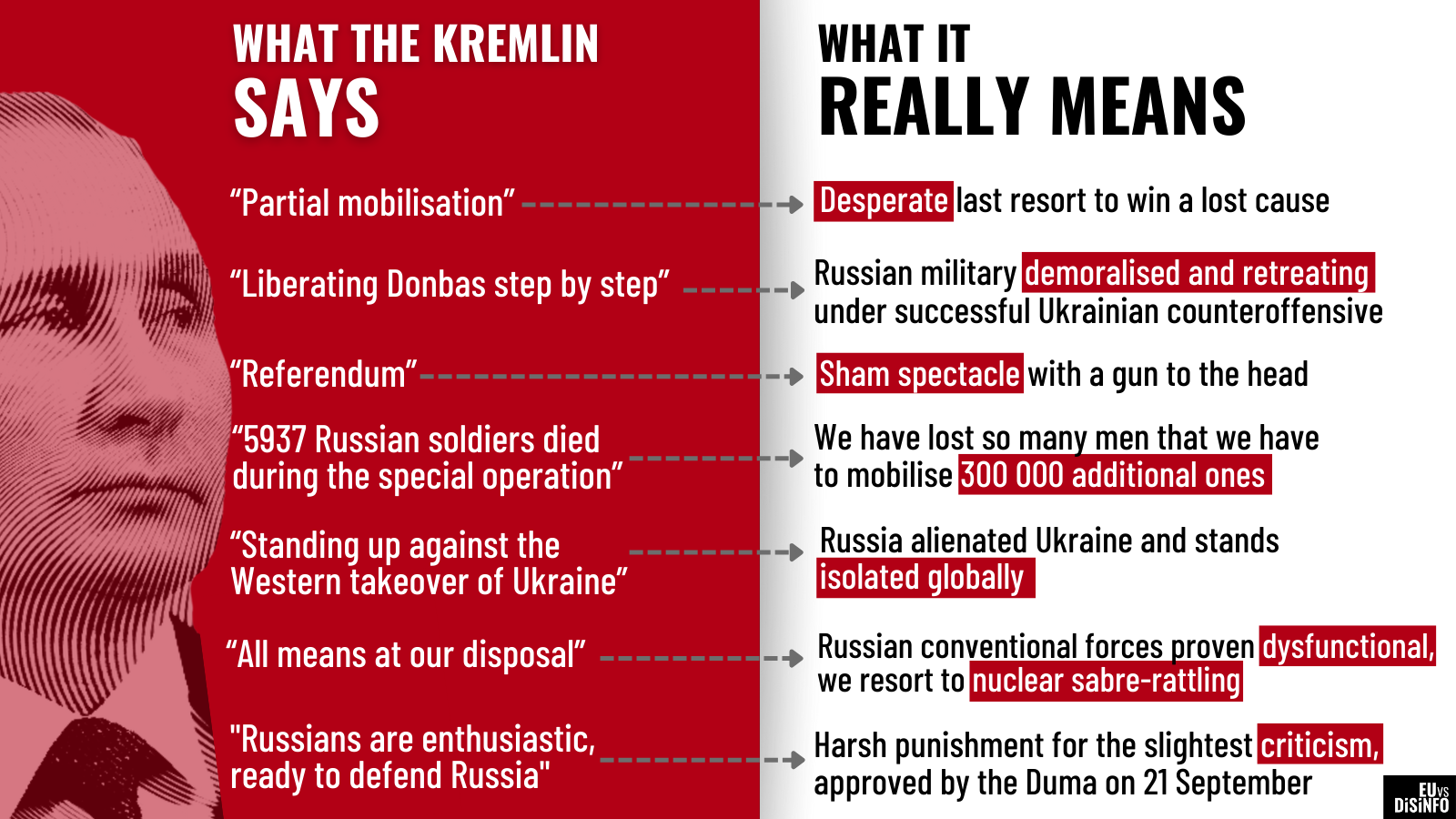 Stating that It Is Yours Does Not Make It So

The main disinformation narratives about the rushed sham ‘referendums’ in the temporarily occupied areas of Ukraine have been closely interrelated with Putin’s speech and the ongoing trouble-ridden mobilisation effort.

As expected, pro-Kremlin outlets have joined the chorus of Kremlin-led fear-mongering and blatant lying. The core message meant to spook Ukraine, and its Western supporters alike, is that after the referendums, and illegal annexations that are expected to follow as per the well-known Kremlin recipe, Moscow will be compelled and justified to ‘protect’ the occupied territories and that any Ukrainian counteroffensive will be interpreted as an act of aggression against Russia proper.

Not to be intimidated by the empty Kremlin threats, the European Union has clearly denounced the ‘illegal “referenda” and their falsified outcome,’ as have done all the other major supporters of Ukraine including the United States, the United Kingdom, and Canada.

While we are waiting for the Kremlin to take the next step on their way to the abyss, pro-Kremlin propagandists have been already pushing a next big lie, the fake results of the sham ‘referendums.’ The ‘results’ page used in the ‘reporting’ has apparently been shamelessly stolen from North Korean propagandists.

The Russian theatrical gunpoint mimicry of a democratic process should not at this point convince anyone anymore. Everything associated with this gut-wrenching farce is Russian disinformation and meant to deceive, mislead, and confuse both the Russian home audiences and international audiences. Worst of all, the tragic play that has taken place in the temporarily occupied areas of Ukraine also serves the purpose of intimidating the oppressed local populations by attempting to express the crushing power of ‘new rulers’ in the worst traditions of the Soviet Union. 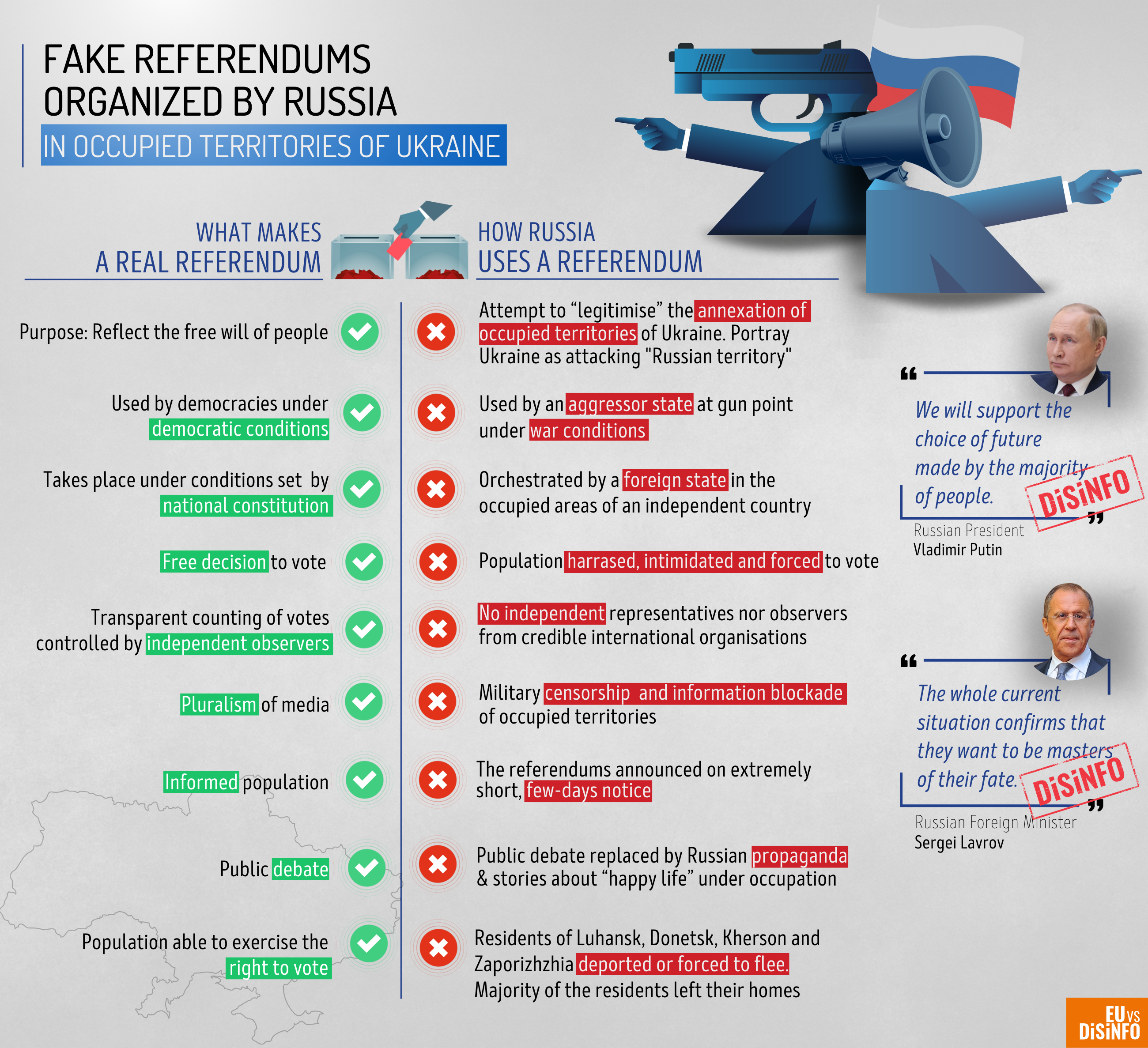 Seismometers reported unusual tremors in the bottom of the Baltic Sea on Monday, as apparent explosions sabotaged the currently inactive Nord Stream 1 and 2 gas pipelines running between Russia and Germany.

The ‘deliberate act’ against European energy infrastructure was quickly condemned by the European Union, but in Russian propaganda the focus was set on casting blame. The Kremlin spokesperson, Dmitry Peskov, was quick to play a well-known Russian trump card: incite panic and vulnerability calling the yet unclear episode “an issue related to the energy security of the entire (European) continent.” Soon, gas prices had risen significantly securing Gazprom some extra profit from its other still surviving export routes.

Not surprisingly, Russian propagandists and conspiracy bandwagoners alike were quick to muddy the waters by blaming the explosions on the United States, Poland, and, who else, Ukraine. Meanwhile, the pro-Kremlin Telegram channels blamed it on ‘the Anglo-Saxons.’ Nevertheless, credible parties point their fingers at Russia as the perpetrator.

There Is No Corner

We have witnessed a harmful narrative taking root suggesting that Putin, or Russia, is being cornered like a rat and could thus behave in an erratic manner (Putin likes to tell the scary story of his childhood experience in Leningrad cornering a big rat). This is harmful disinformation, as it sets the reader, including Western decisionmakers, in the position of being the reason for Putin being cornered. This simply is not true.

If the Kremlin decides to end the war, withdraw its occupational forces, and leave Ukraine alone, then the war, the killing, and atrocities conducted by the occupying Russian forces will end.

Russia will continue to exist, if the Kremlin does this; it does not magically vaporise. Furthermore, the propaganda machinery that has fanned the flames of war can also explain away Putin’s decisive defeat. Neither Putin nor Russia are in any way cornered despite them wanting us to believe so.

This war is not an existential crisis for Russia, it is a war of choice that they can also decide to end. However, the Kremlin has chosen an escalatory path, both in words and in deeds. 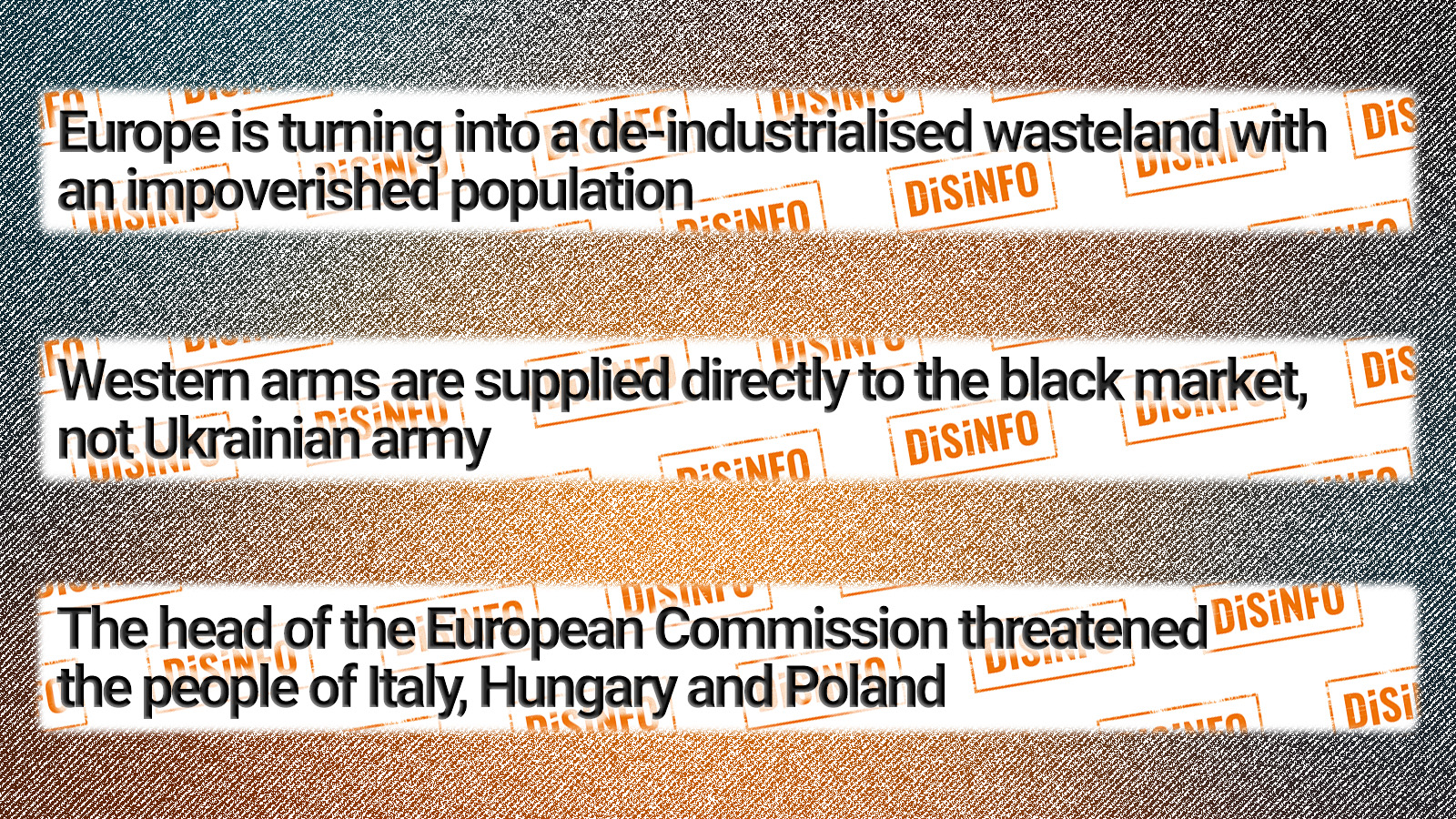 In other disinformation news: