Capitalising on the Coronavirus Conspiracist Frenzy 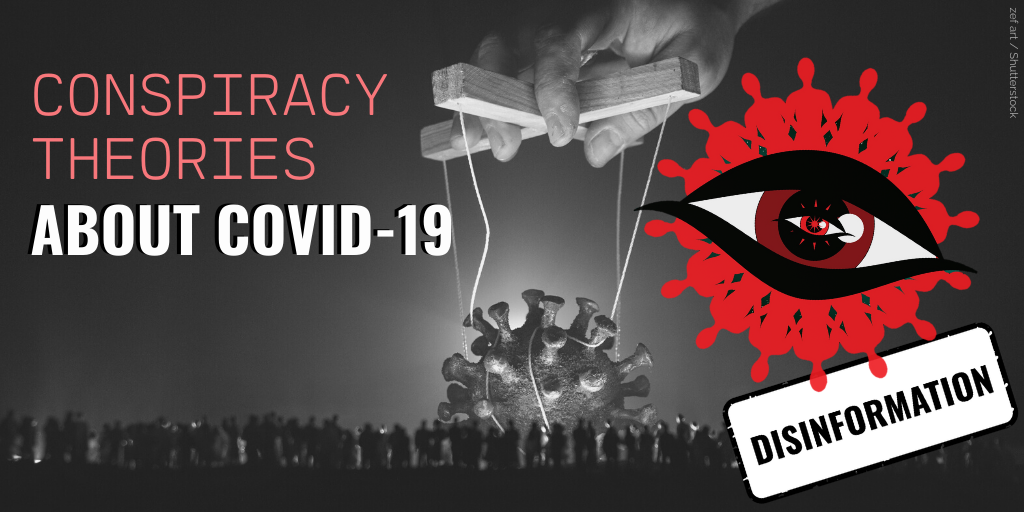 As the COVID-19 crisis continues to monopolise public life around the world, conspiracy theories about the virus continue to gather steam – and pro-Kremlin media are eager to jump on the bandwagon.

Few developments in recent history have so suddenly and ruthlessly laid bare the vulnerabilities and fragility of contemporary life as the COVID-19 outbreak. Within just a few short months, the virus has profoundly transformed life around the world, with no end in sight or real possibility of a “return to normal” until a vaccine is found. The challenge to our societies is unprecedented in scope, and the consequences and impact of the pandemic still impossible to assess.

Under conditions of such uncertainty – combining health anxiety about a novel disease, economic insecurity, social isolation, and exceptionally restrictive government measures – it is no surprise that mis- and disinformation flourish more vigorously than usual. Indeed, history shows that widespread disinformation is a common feature across pandemics – a phenomenon for which human psychology and cognition are partly to blame. Uncertainty predisposes us to search for answers to help us make sense of what’s going on, which can enforce mental shortcuts and errors of logic that lead us to accept false conclusions. At the same time, the present infodemic is also exacerbated by the flawed incentive structure of the online environment and specifically social media – which favours cheap, low-quality information with strong emotional appeal over high-quality, rigorously-researched content. (To their credit, platforms are now taking steps to mitigate this problem, though with limited success.)

Even as the EU and other countries begin to prepare their quarantine exit strategies, the infodemic shows no signs of abating. In particular, conspiracy theories around COVID-19 continue to swarm the digital landscape, metastasizing in real time and, in some cases, even spilling over into the real world – sometimes with alarming consequences. The new viral “Plandemic” video is just the latest example of this troubling trend – already viewed more than 8 million times, it claims that a shadowy cabal is using the COVID-19 crisis as a cover for profiteering and entrenching power.

It’s important to acknowledge that the bulk of this proliferation is non-malicious in intent. While the chief architects of conspiracy theories are often driven by self-serving motives like profit or desire for recognition, many of their acolytes are simply victims of deception, and contribute to the spread of these conspiracy theories out of genuine misguided belief. This is the difference between disinformation and misinformation; and the former is morally reprehensible because it intentionally preys upon people’s fears and weaknesses.

It is therefore hardly surprising that the coronavirus conspiracy boom is a natural fit for the Kremlin’s disinformation machine, which has a long track record of promoting conspiracy theories on a wide array of topics (Soros, “global elites”, Western false flag operations…the list goes on). Regarding the coronavirus, pro-Kremlin media have also been spreading conspiracy theories since the very beginning of the outbreak: our first recorded case on the topic, from January 22nd, asserts that the coronavirus was “likely elaborated in NATO biolabs”. Notably, the origin of this conspiracy theory in the Kremlin-linked media sphere is confirmed by data analytics firm Semantic Visions, which found that the first ever reference to COVID-19 being a US-made biological weapon came from tvzvezda.ru, a state-owned outlet operated by the Russian Ministry of Defence, on January 20th. This conspiracy theory was repeated yet again this week in various forms (see here, here, here, and here). 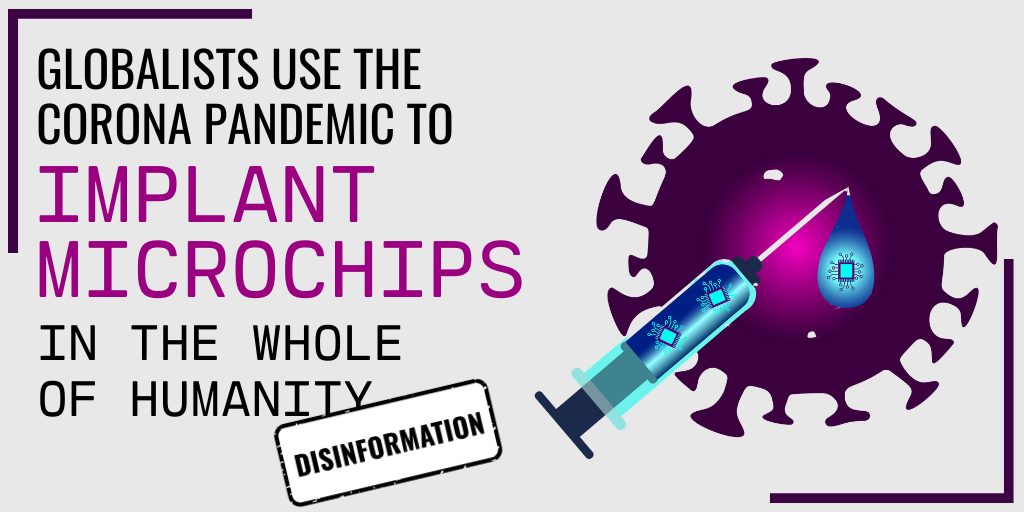 This week, it was interesting to observe the pro-Kremlin media bandwagoning on other conspiracy theories about the coronavirus that have originated and spread via other channels. Bill Gates and his evil “vaccination microchip plot” were a leading target – see for example here, here, and here. Absurdly, Gates also stands accused of paralysing 496,000 children in India with a polio vaccine and seeking to reduce the world’s population via vaccines for over 15 years. Gates has long warned about the dangers of being unprepared for a new global pandemic and has mobilised significant resources in the fight against the coronavirus, including for the development of a vaccine. As a result, he has become the punching bag for anti-vax activists – and the pro-Kremlin media appears more than happy to play along. (For more on Bill Gates and the Kremlin’s anti-vax disinformation campaign, see here.)

Related to Gates, other cases invoked the conspiracist notion of “global elites” orchestrating the pandemic – a narrative largely in line with the “Plandemic” video referenced above. For example, we saw claims that the WHO is part of the global government and the coronavirus is a pretext for a global colour revolution; that the coronavirus is a game coordinated by the pharmaceutical and media industries; and that the Freemasons have begun “chipping” Ukraine’s population. (No, no, and no.) One creative case also claimed that Dr. Anthony Fauci, the highly respected public face of the US government’s pandemic response, threatened President Trump with a “major epidemic” due to his personal sympathies for Hillary Clinton. Another alleged that “diabolical Masters of Darkness” manufactured the pandemic and are “committing mass genocide”.

A particularly disruptive variation of the conspiracy theory that the pandemic is a tool of mass control links the coronavirus with 5G technology – and in recent weeks, it has led to arson and vandalism attacks against cell towers in several European countries. But this naturally didn’t stop News Front from falsely claiming that the US Secretary of Defense admitted that 5G poses a threat to humans. (He didn’t, and it doesn’t.) Incidentally, News Front was included in Facebook’s latest takedown for engaging in coordinated inauthentic behaviour – more on that here.

Finally, to round out the list, other coronavirus conspiracy theories this week included claims that the virus spreads on the basis of race; that there is no pandemic and COVID-19 is just like the flu; and that COVID-19 tests are likely infecting patients in Italy and Spain. 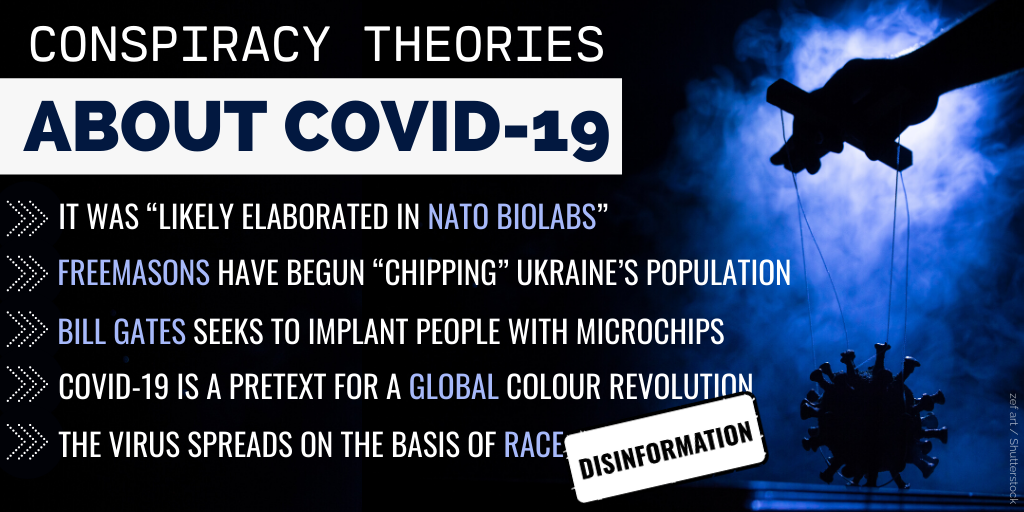 Date
Title
Outlets
Country
Germany maintains dominance of the EU bloc through keeping the rest of the countries weak
Germany
Ukraine has to return Lviv to Poland
Poland, Ukraine
NATO does not help member states to fight against coronavirus
EU
Leaked documents cast doubt on evidence in MH17 trial
The Netherlands, Ukraine, Russia
US Congress transcripts will prove Russia did not meddle in 2016 election
US, Russia
IMF has abandoned Ukraine and cut its support
Ukraine
Georgia joined the Russian empire in the early the 19th century
Georgia, Russia
NATO illegally expanded to the borders of Russia
Russia
US refused to help Italy against COVID-19
Italy, US
The presence of Russian mercenaries in Libya is nothing but a rumour
Libya, Russia
Poland and Western democracies cooperated with Hitler
UK, France, Poland, Germany, Russia
Czech Russophobes dismantled the Konev monument to increase dependency on the USA
Czech Republic, US, Russia
Western countries revise WWII history to evade responsibility for allowing Hitler to gather strength for the attack on the USSR
UK, France, Germany, US, Russia
Ukrainian President Zelenskyy has arrived in the occupied part of LPR
Ukraine
No solid evidence of Russia's role in Skripal poisoning
UK, Russia
By defeating Nazism, Stalin atoned for crimes against his own people and saved other nations
USSR, Czech Republic, Germany
Western democracies are primarily responsible for the Second World War
USSR, Poland, Germany
Ukrainian army purposefully fires at children in Donbas
Ukraine
The Masters of Darkness invented the COVID-19 and seek world domination
US
In order to join the EU Western Ukrainians are ready to secede to Poland
EU, Poland, Ukraine
To assign equal responsibility for the outbreak of WWII to Nazi Germany and the USSR is falsification
Germany, Russia
USSR was forced to go to WWII only in June 1941
USSR, UK, France, Poland, Germany, Belarus, Ukraine
Over 95% of Crimea voted to be part of Russia
Ukraine, Russia
The US government is behind an attempted coup in Venezuela
Venezuela, US
UFO’s, blaming China and the incursion in Venezuela are all US ruses to divert attention away from the coronavirus crisis
Venezuela, China, US
Germany is still in captivity and is not a fully sovereign state
EU, Japan, Germany
OPCW ignores evidence proving Douma chemical attack was staged by White Helmets
Syria, Russia
There was no Soviet occupation in Europe
EU, USSR, US
Americans funded laboratory research in Wuhan and are guilty of coronavirus outbreak
China, US, Russia
The people of Crimea choose Russia by free will
Ukraine, Russia
Out of 3000 articles published by SouthFront, only 3 contain disinformation
EU, US
Bill Gates vaccination leaves 496,000 children paralysed in India
India
US labs in Ukraine are military bases
US, Ukraine
US Secretary of Defense let slip that the 5G might be destructive
US
Bill Gates and other globalists use the corona pandemic to implant microchips in the whole of humanity
US
EU and NATO countries are hostile towards Russia because they fail at showcasing unity
EU, Russia
Officials, connected to child molestation, are behind the Lanzarote convention
Armenia
COVID-19 is an ordinary flu epidemic, hysteria is caused by media and politics
Austria
Bill Gates seeks to vaccinate everyone and implant people with microchips
US
Poroshenko and Lutsenko hide their and their “Western allies'” involvement in Euromaidan
Ukraine
Russia has no role in Ukraine’s war and soon the EU will be forced to ask for better relations
EU, US, Ukraine, Russia
Coronavirus is linked to race, racial differences exist at a medical level
UK, US
Freemasons began secretly chipping Ukrainians
US, Ukraine
EU is not democratic and is led by Germany
EU, CEE, Germany
The WHO is part of the global government, coronavirus is a pretext for a global colour revolution
Italy, Serbia, US, Russia
There is no reliable evidence of Russians fighting in Libya
Libya, Russia
Euromaidan was organised by the Americans
US, Ukraine
Dangerous experiments were carried out on people in Lugar Lab in Georgia
Georgia, US
Coronavirus was created by Americans in Ukrainian laboratories
US, Ukraine
At the age of 11, 40% of French pupils don't know how to read or write
France
Ukraine became a US testing site for developing biological weapons
Georgia, US, Ukraine
West-funded pro-Nazi opposition in Belarus wants to cancel the Victory Day parade
Belarus
The IMF conditions loans to Belarus with gender equality and rights of sexual minorities
Belarus, Russia
Bill Gates has proposed micro-chipping people to fight the coronavirus pandemic
US
Refugees from Greek camps will jeopardise Germany's health and safety
Greece, Germany
Bill Gates is reducing and microchipping world's population through vaccination
US
The Pentagon creates biological laboratories around the world to develop "combat" viruses
Georgia, US
Patients in Italy and Spain likely to be constantly infected by the coronavirus tests
Italy, UK, Spain
The White Helmets are a British intelligence organisation
UK, Syria
NATO does not care about Montenegro amid COVID-19 pandemic
Montenegro
US biolabs in Ukraine connected to the spread of COVID-19
US, Ukraine
Washington backed the demolition of the statue to Soviet commander in Prague
Czech Republic, US, Russia
White Helmets are frank falsifiers
Syria, US