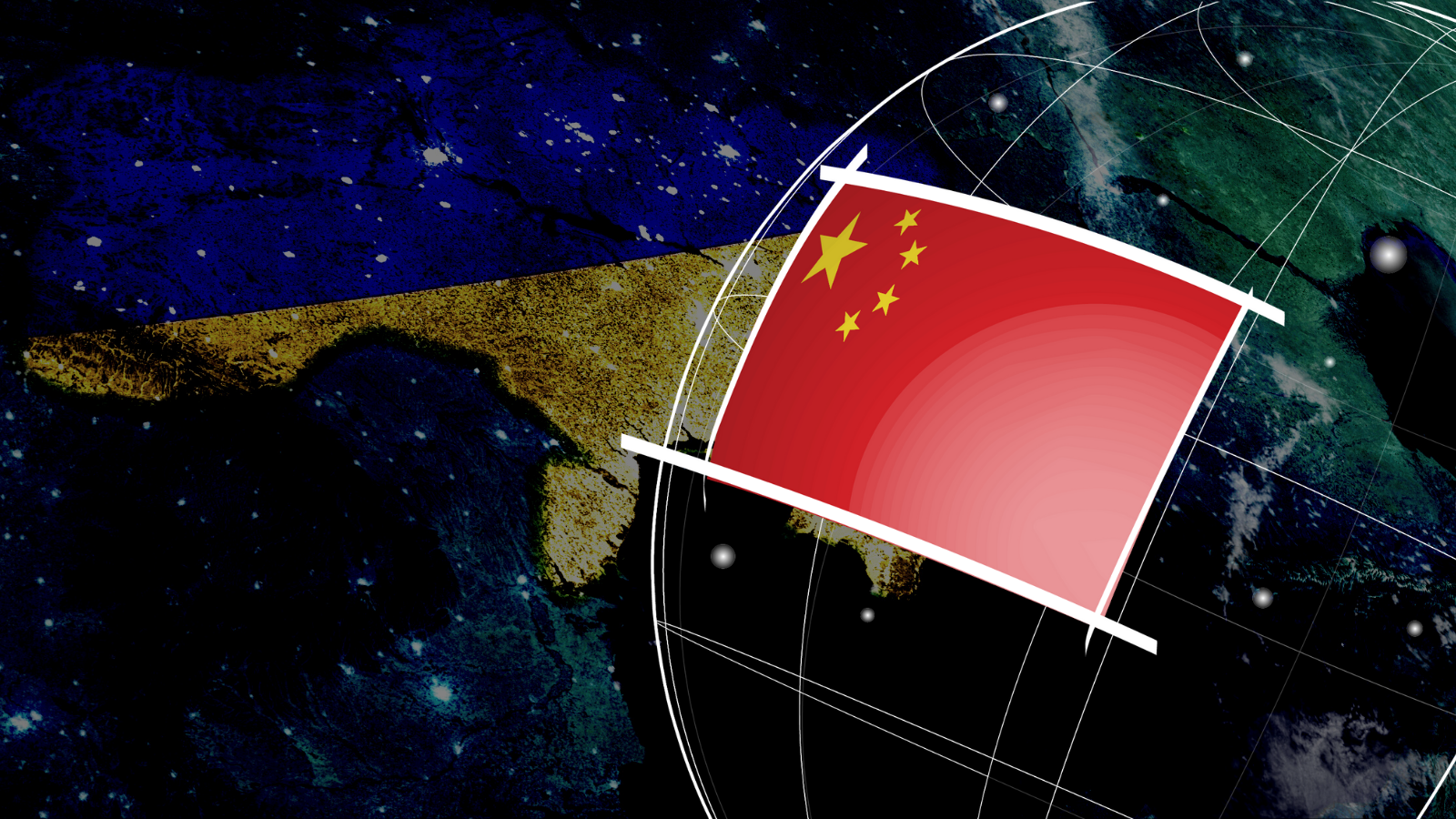 Chinese media and officials have made it clear: it is not Russia that is to blame for the military aggression against Ukraine, but the West and NATO’s eastward expansion of the past 20 years, ignoring Russia’s ‘legitimate security concerns’. At the same time, China ‘respects the territorial integrity and sovereignty of all countries’. Over the past weeks, as Chinese state-controlled media has turned its attention to Ukraine, it has promoted a number of narratives to illustrate these points.

China is neutral, China is not neutral

Even before Russia’s invasion of Ukraine began, China positioned itself as a neutral onlooker, officially supporting quiet diplomacy and the implementation of the Minsk agreements, aimed at ending the war in Eastern Ukraine. It is important to remember that China has never recognised the Russian annexation of Crimea, and has so far not given any public sign it might do so.

Since then, this neutrality and China’s role as a facilitator in the conflict has been emphasised. At the same time, discourses on peace, humanitarian aid and the evacuation of citizens – as crystallised by FM Wang Yi’s ‘six-point initiative’ – are imbued with criticism of the West’s so-called disinformation and sanctions which, China claims, are opposed by ‘like-minded partners’ and the developing world. The point is not really what is going on in Ukraine, but how bad the US (and the West) is.

On the one hand, China expresses support to the ‘sovereignty and territorial integrity of all nations’, but on the other it never publicly mentions Russia’s violation of Ukraine’s territorial integrity, and even explicitly resists calls to condemn Russia. Instead, Chinese official channels repeatedly emphasise the ‘complex historical issues’ behind the situation in Ukraine, sidestepping any accusations of making contradictory statements.

And while willing to talk to China’s strategic partner Russia, President Xi has yet to find the time to talk to Ukraine, regardless the fact that China entered into a strategic partnership agreement with Ukraine already in 2013. Even before that, in 1994, China’s government officially endorsed the principles of the Budapest memorandum, giving security assurances to Ukraine, and promised alongside Russia, the US, the UK and France to respect Ukraine’s sovereignty, independence and existing borders in exchange for it giving up nuclear weapons.

As talks of territorial integrity and sovereignty easily link to Taiwan, there has been an outpouring of statements on China’s unwavering position on the topic: Taiwan is not Ukraine and the island is accused by state controlled media and officials of exploiting the conflict to draw international attention.

However, this stated neutrality does not mean that China is actually neutral about what the future of Ukraine should look like. Ultimately, Ukraine is envisaged as a bridge that is outside of NATO and the EU, and nothing else, a portrayal which effectively denies the country the right to choose its own path. China often quotes the 1975 Helsinki Final Act when referring to the ‘principle of indivisible security’, while conveniently leaving out that the same document enshrines the right for countries to choose their own alliances, to which the related 1999 Istanbul charter – also signed by Russia – adds the right to choose one’s security arrangements in general. Not to mention that Article 51 of the UN Charter guarantees states’ right of collective self-defence. Article 2.4 of the same charter includes the respect for states’ sovereignty, independence and territorial integrity – these are core principles for China’s foreign policy. And even though Russia clearly undermines the very basis for the stability of our international system, China has not condemned it.

There are no tensions, there is no invasion

For a long time, China questioned whether there was a crisis at all. Until 24 February, reports on Russia’s imminent invasion of Ukraine were labelled as nothing more than ‘scare-mongering hype’ – just like Russia did – and disinformation that Washington was pushing for its own geopolitical purposes. It was also panic created by the US that supposedly caused the build-up of troops at the border. The US-led ‘hype’, belligerence and domestic issues were then put in contrast with China’s apparent calm, its policy of aid, and its search for peace.

Even when Russia did invade, Chinese officials refused to call a spade a spade, with the word ‘invasion’ considered a typically Western method to distort reality. With a few sporadic exceptions, the only Chinese state-controlled media that regularly uses the term is CGTN. Even faced with the massacre in Bucha, Chinese overseas outlets have so far either simply ignored the fact or reported Russian denials and accusations against Ukraine. The only exception is again CGTN, which offers a more complete account, but still falling short of condemnation. Chinese official channels regularly accuse the US and the West of disinformation, ‘debunking’ claims that China knew Russia’s plan and that it supports the conflict, among other things.

Thus, as a neutral-appearing actor, China has preached the UN’s role and called for negotiations rather than confrontation, without ever questioning Russia’s role in the conflict’s genesis. On top of that, the joint statement released by the two countries after the meeting of Presidents Xi and Putin on the eve of the Olympics opening ceremony made it clear that China supports Russia’s proposals for security guarantees in Europe and opposes any enlargement of NATO, again omitting the aforementioned right of countries to choose their alliances that Russia, too, has agreed to. 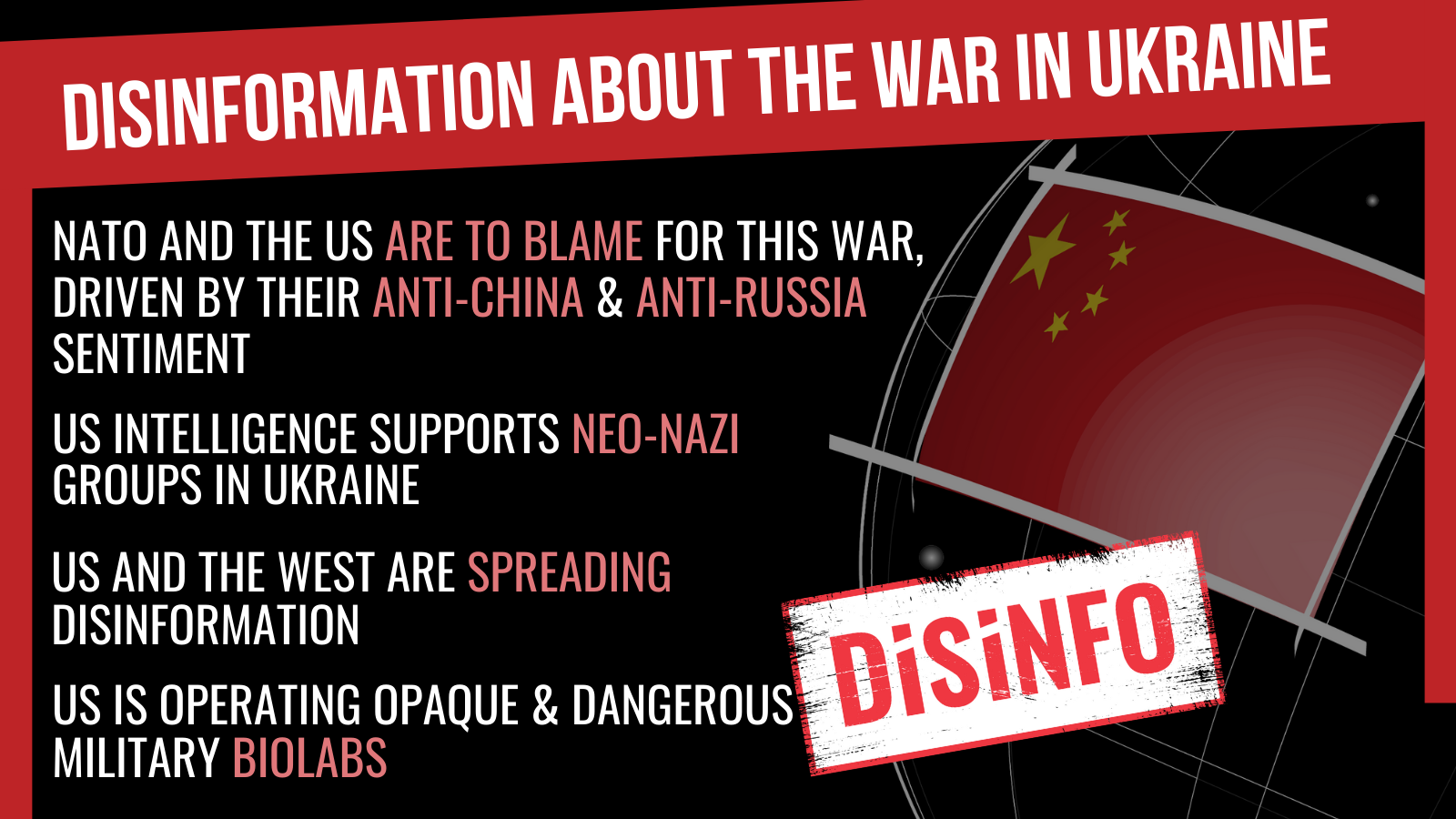 Russia is innocent, may the ‘real culprits’ please stand up

Already before Russia’s invasion of Ukraine, China sketched some positions that now seem to be set in stone. Above all is that NATO and the US are to blame for this war (perpetuating a myth seen in pro-Kremlin narratives), driven by their anti-China and anti-Russia sentiment, pushing Russia into a corner. Later, other narratives borrowed from the Kremlin’s playbook resurfaced in Chinese state-controlled channels: the conspiracy narratives that the US is operating opaque and dangerous military biolabs (also used by China to divert COVID-19 origin tracing from itself), and that US intelligence supports neo-Nazi groups in Ukraine. By republishing articles from Sputnik, Chinese media has provided a platform to the sanctioned outlet to spread these conspiracies.

These anti-US and anti-NATO narratives reinforce the idea that Russia is not the aggressor. After Russia invaded, China made sure to reiterate its understanding of Russia’s security concerns, further blaming the West for its confrontational approach.

To be fair, China has not amplified all of Russia’s disinformation narratives and there have also been occasional divergences, notably regarding human and material casualties, which the Chinese state-controlled TV network CGTN has at times ‘debunked’. Moreover, China has pointed to its rounds of humanitarian assistance to Ukraine, as the situations ‘is not how China would like it to be’. Some articles by Chinese academics in international media might also create the impression that at least some inside China are worried about a serious economic impact on China and the danger of China becoming isolated in case of a long war in Ukraine or countries dividing into two opposing blocs – a Cold War 2.0.

All in all, however, Chinese state media’s rhetorical alignment with the Kremlin has been observed since early in the crisis, and news reports in Chinese state-controlled media have relied heavily (though not exclusively) on Russian sources. Ultimately, the war in Ukraine has been used by China to promote on a larger scale its already familiar criticism of the US and the West.