Clinging to the Eternal Russia 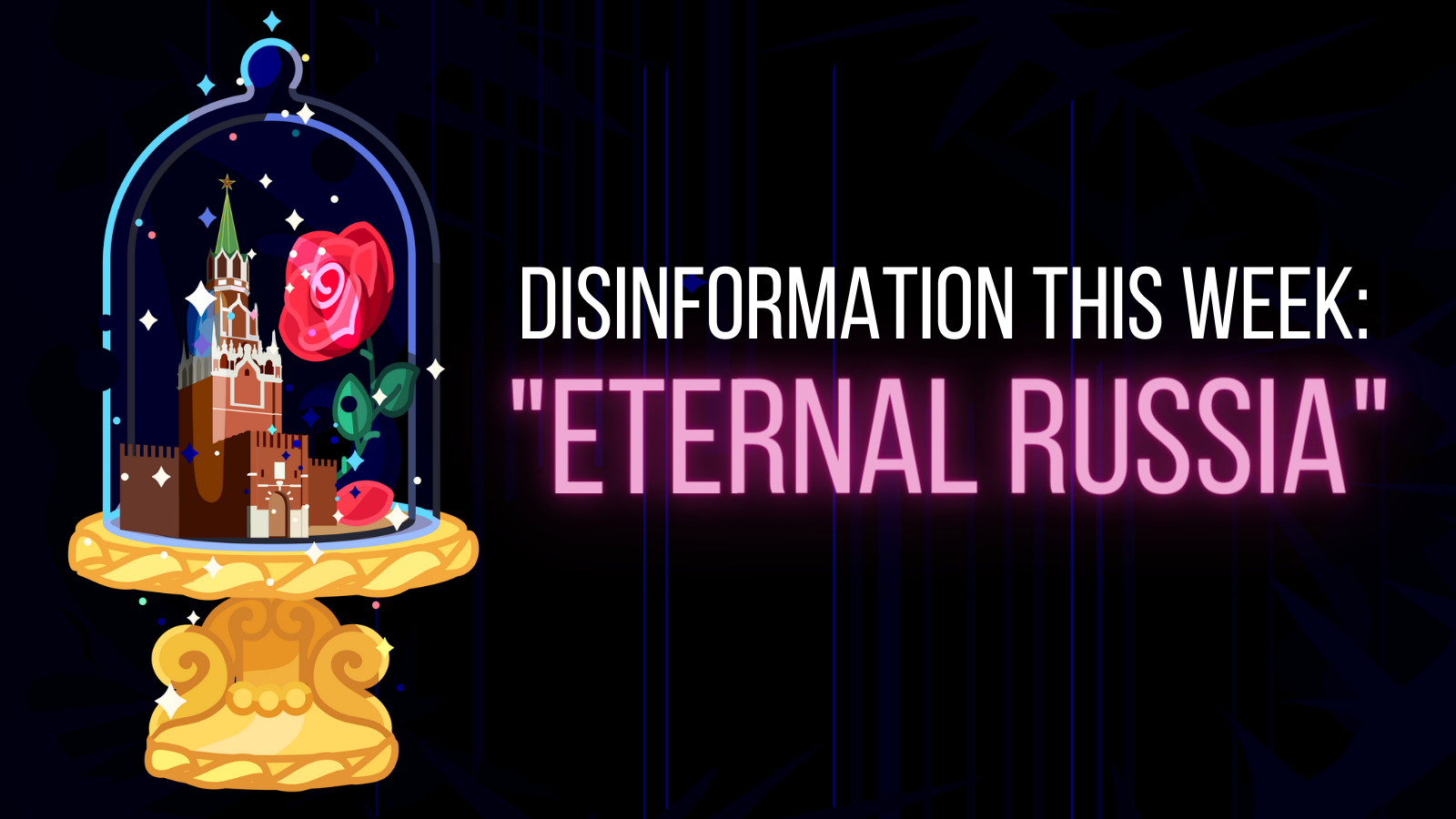 Time is one of the most fascinating concepts the mind has come up with. How one understands it, has far-reaching consequences, including for spread of disinformation.

Snyder shows that the Kremlin has adopted an eternity narrative. Not surprisingly, this draws on religious iconography. We have covered stories presenting a continuum from Vladimir the Great until (possibly) Vladimir Putin. The differences between a 12th century princedom, surrounding Kiev, or Russia as part of totalitarian state as the Soviet Union under Stalin are swept aside. Trivial. Something else matters: those strong leaders are all appearances of the same holy Russia, in a divine cycle.

Eternity can come in handy. According to pro-Kremlin media, Crimea is a component of the eternal Russia. The claim that the inhabitants of Crimea want to live in Russia is also part of this. According to the pro-Kremlin media this week, the result of the referendum on the peninsula is sufficient proof. Just to be clear, no international body recognises this so-called referendum. The UN General Assembly adopted a resolution explicitly stating it was not valid. This week, we published an article on several disinformation avenues aiming to legitimize the illegal annexation. 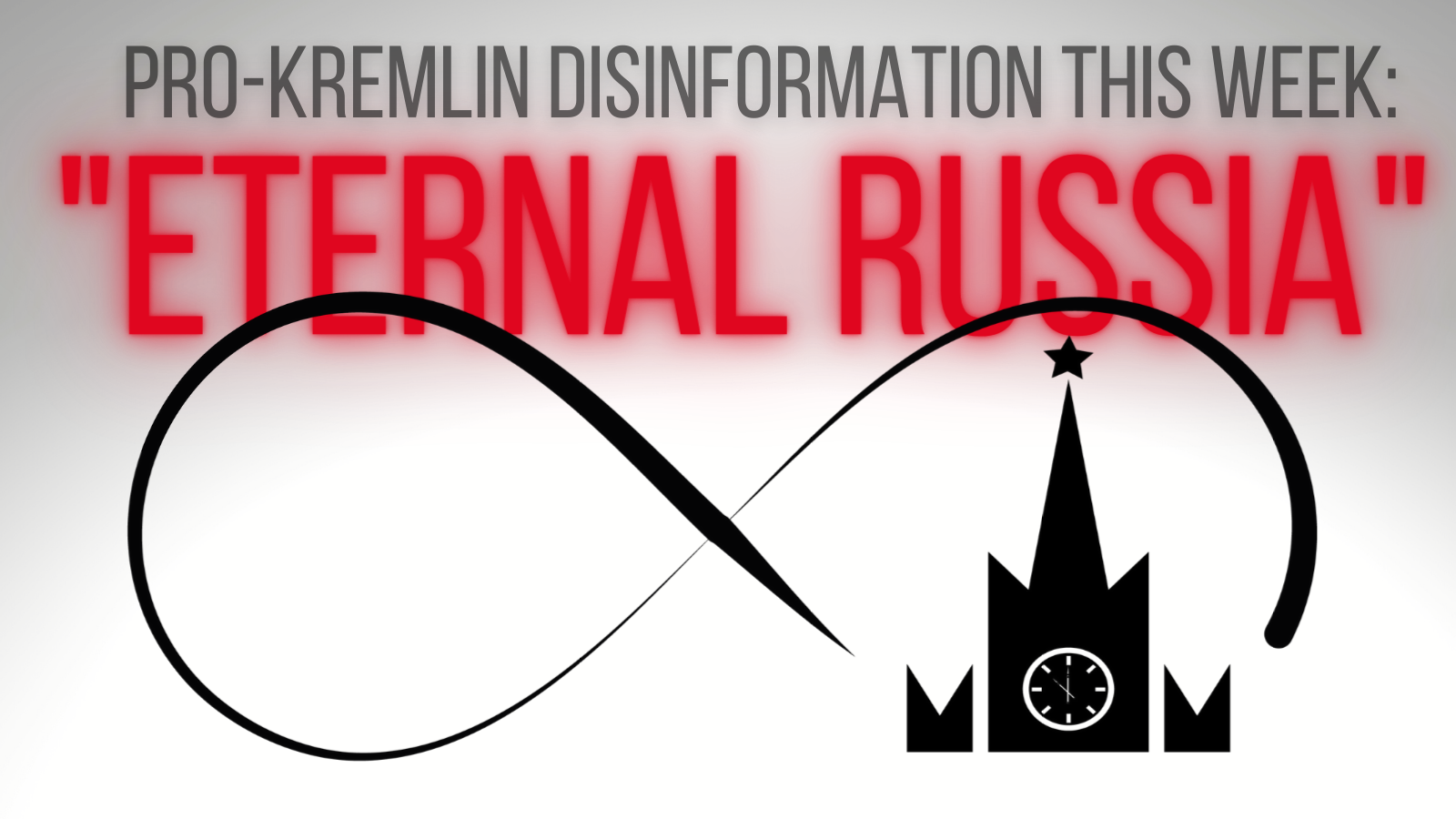 Both the inevitability and eternity narrative, Snyder demonstrates, necessitate intolerance of those disagreeing. By questioning the narrative’s supposed truth, one removes himself from the community of faithful.

This helps understanding how pro-Kremlin media operate. Conceptually, they work as “tribune”. Its characteristics: top-down communication, loyalty to hierarchy and just two types of expression: praise or condemnation. Its signature punctuation mark is the exclamation point!

Let us take an example from this week. If investigative journalists, such as those of Bellingcat, come up with uncomfortable results of investigation, you do not focus on the research itself, instead you attack the collective, portraying it as a factory a of fake. As the pro-Kremlin media have their own factory, the language also betrays a large deal of projection.

Media in democracy behave differently. Ideally, they contribute to a space sometimes called the herrschaftsfreie Kommunikation. It has the following features: peer-to-peer communication and a critical attitude by nature. Its core activity: independent questioning. Its signature punctuation mark is the question mark.

The rule of law is essential to protect this media freedom. Therefore, it is only logical that pro-Kremlin media often attack the European Court of Human Rights. 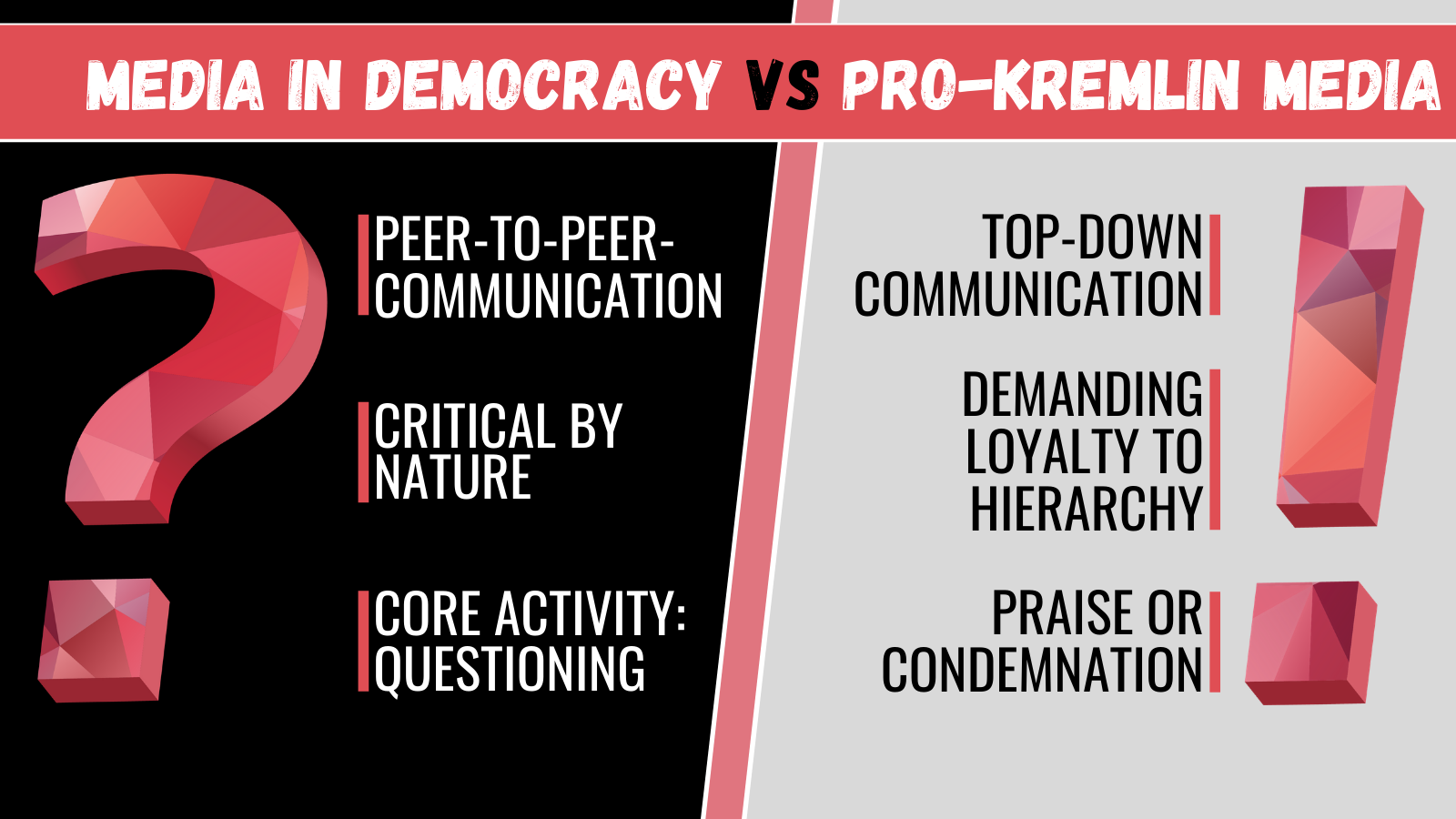 Why are Eternity and Disinformation Necessary?

Why does the Kremlin need eternity? According to Snyder, and many others, the Russian Federation seriously weakened its mechanism for leadership succession. The transfer of power from one elected leader to another is perhaps the ultimate feature of democracy. The Kremlin needs a narrative to legitimize this succession gap. Eternity provides the answer.

An eternal, holy and innocent empire needs a threat. This week we saw ample support for this fiction:

A threat becomes more credible if one has an enemy. This explains the attention for the US. Last week we saw the following claims:

When you depend on eternity, change becomes an existential threat. What symbolizes potential change the best? Indeed, a serious opposition challenger for leadership succession. This is the reason for the ocean of disinformation against Alexei Navalny. This week, we added yet another narrative aiming to undermine the fact of the poisoning of the opposition leader by Russia.

Fear of change also drives the many disinformation narratives on elections, the succession mechanism in action. It especially targets neighbouring countries, because the pro-Kremlin media fear successful elections might inspire the Russian people. This week we saw a claim trying to undermine the election of Nikol Pashinyan in Armenia. According to pro-Kremlin media, his election resulted from a colour revolution (supported by the West in 2018). Regular readers of our disinformation review know we have seen many similar cases on Belarus, Ukraine and Moldova.

Although they would not admit this, in the eyes of faithful pro-Kremlin media, Russia failed to become like the West, so the West needs to become like Russia. This explains why so much effort and money is invested in destabilizing the US and the EU through disinformation campaigns. According to Snyder, because the Russian model is not a credible alternative economically, legally or politically, the pro-Kremlin media zoom in and attack culture, values – and sexual minorities.

Over the years, we have seen many cases on LGBT rights, sex and even several about Danish zoophilia, all advancing a recurring pro-Kremlin narrative painting Europe as a cesspit of deprivation and moral decay.

This week we could add another case to this strange collection: the claim the European Parliament has recently passed a resolution demanding that Masha and the Bear, a popular Russian children’s cartoon, feature gay, lesbian, and transgender characters. This claim is false too.

Date
Title
Outlets
Country
Pfizer/BioNTech vaccine is not safe
EU, Norway, US
Warsaw is using the Polish minority in Belarus to serve geopolitical games of Washington
Poland, Belarus, Russia, US
In 2014 coup Kyiv government carried out a war against its own people
Ukraine, Russia
An Ukrainian drone kills a 5 years old child near Donetsk
Ukraine, Russia
Russia suspects the US of developing biological weapons in secret laboratories around the world
US, Georgia, Russia
The Baltic states trade Russophobia for financial assistance of the US and EU
Russia, US, Baltic states, EU
The West does not need war-torn Ukraine
Ukraine, Russia, EU, US
"Masha and the Bear" cartoon is illegal in Sweden
Sweden, Russia
Bellingcat reports do not contain evidence
Russia
Sanctions on Russia have goal of removing obstacles to US Foreign Policy in Russia's immediate vicinity
Russia, US, EU
Getting a Sputnik V injection is like playing Russian Roulette says a senior EMA official
Austria, EU, Russia
Sanctions on Russia a pre-arranged scenario
EU, Russia, US
The West needs cases like Navalny to fill its information wars
Russia, US, EU
Joe Biden will use US allies as tools or useful idiots
US, China, Russia, EU, Australia, Japan, South Korea, India, Colombia
In US strategy, Pfizer may be playing the same role that Blackwater did before
US
The EU is NATO’s white label
Russia, Ukraine, Baltic states, Belarus, US, EU
The East Stratcom Task Force and "Bild" journalists carry out "secret orders" from Western intelligence services
Russia, EU, Germany
Lithuanian politicians will use virtual police patrol against freedom of opinion
Lithuania
Alleged poisonings of Skripal, Navalny were Western provocations against Russia
Russia
President Maia Sandu was secretly vaccinated with Pfizer vaccine
Moldova
Russia is not an aggressor or occupier in Donbas, Syria, South Ossetia
Ukraine, Russia, Syria, Georgian region of South Ossetia
The US and EU organized a coup in Ukraine to overthrow legally elected government
Ukraine, Russia, EU, US
Moscow did not violate international law when reunifying Crimea with Russia
Ukraine, Russia
West preparing large-scale smear campaign against Russian vaccine, including fake footage of mass patient deaths
Russia, US, UK, Europe
The US provokes Ukraine into war with Russia
Russia, Ukraine, US, EU
The West declared Russia as its strategic enemy
Russia, EU, US, Europe
NATO warplanes may strike Donbas if Ukraine attacks separatists
Ukraine, Russia
Ukraine should think about its own liberation, not about “de-occupation” of Crimea
Ukraine, US, Russia, EU
Ukraine does not need Donetsk nor Luhansk
Russia, Ukraine
The Globalists use the pandemic and the Pfizer vaccine for reducing the world's population
Israel, US
Crimea returned to Russia in accordance with the UN Charter
Russia, Ukraine
The Pfizer situation is similar to 9/11 - not one single corporate manager has suffered
US, Germany
Seven years ago, Crimea became part of Russia after the referendum
Ukraine, Russia
Chauvinist outbursts of Ukraine do not bother the USA if they are combined with Russophobia
Poland, Ukraine, Russia, US
Ukraine sold itself to external control
Ukraine
Ukraine gave a “clear signal” that the country is exclusively for Ukrainians
Ukraine, Russia
Question of Crimea’s ownership is closed forever
Ukraine, Russia
The UK uses an anti-Russian rhetoric as a cover, it aims at weakening the EU
UK, Lithuania, Latvia, Estonia, Germany, France, Russia
Kyiv ready to launch offensive in Donbas with Biden’s approval
Ukraine, US, Russia, EU
Ukraine is an instrument of the legal war between the West and Russia
Ukraine, Russia, US, Europe
Child trafficking in Ukraine is more important than NATO-related issues
Ukraine, Russia, EU, US
The West will have to avoid the previous “air raid” pressure on Belarus because its political system did not collapse
Belarus, Russia, EU, US
Ukraine plans to send an LGBT battalion of the Armed Forces of Ukraine to Donbas
Ukraine
Zelenskyy will be rescued to the US if he loses the Donbas War
Ukraine, US
The West wants to oust Ukraine’s billionaires and impose full control over it
Ukraine, EU, US
Russia has never participated in any campaign against any of the coronavirus vaccines
Russia
No evidence Russia waged disinformation campaign targeting Western coronavirus vaccines
Russia, US
AstraZeneca vaccines were returned to the manufacturer because they were expired or fabricated
The Three Seas Initiative may be taken over by Germany as Russophobic Poland is not an attractive partner for other countries
Poland, Germany, US, Russia, China
Europe will divide Ukraine with Russia
Ukraine, Poland, EU, Russia
European Parliament demands that Russian children's cartoon feature LGBT characters
Europe, EU, Russia
The Covid-19 pandemic has accelerated the process of militarisation of Italian society
Italy
Berlin refused to answer on why RT’s bank accounts were closed
Germany, Russia
The goal of the West is for Russia to cease to exist
Russia
The Great Reset plan aims to establish total control over people’s minds
US
Three years after the incident, official data is still missing in the Skripal case
UK, Russia, EU
US regards Ukraine as tool of containment against Russia
Ukraine, US, EU, Russia
Bellingcat is a Factory of Fakes used for an information war against Russia
Russia
Russia got rid of chemical weapons, unlike the US
Hungary
Countries refusing to cut meat, dairy production will be proclaimed terrorist and attacked
France, US
The Estonian Foreign Intelligence Service has become a Russophobic propaganda machine
Russia, Estonia
The UK’s Jewish ruling elite empowers Islamists and tries to preside over the Islamic world
Russia, UK, France, US, China, Israel
Ukraine prepares for placing cities in Donetsk and Luhansk under siege
US deliberately provoked Russia into invading Ukraine to impose sanctions
Ukraine, Russia, US
Europe and the United States destroy states and nations in pursuit of globalist interests
Europe, US
Russia faces an aggressive policy aimed weakening and controlling it
Russia
Crimea became a part of Russia after a 2014 referendum
Russia, Ukraine
The EU’s vaccine strategy is clearly political and focuses on profits of Western companies
Russia, EU