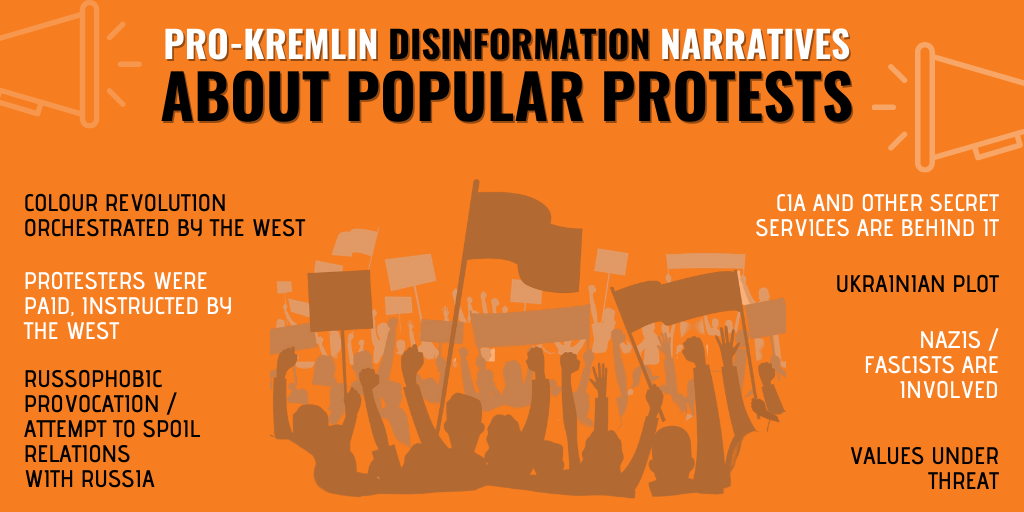 Unhindered by facts, disinformation can at times take surprising and unexpected turns. However, most of the time, pro-Kremlin media rely on a set of well-established narratives that work as templates for individual situations. Nowhere is the functioning of such templates more evident than in the pro-Kremlin media coverage of popular protests around the world.

“A colour revolution, instigated by the Anglo-Saxons/America/the West” – is the knee-jerk reaction of pro-Kremlin media whenever crowds gather in the streets to protest corruption, government abuse and curbing of civil rights: in Georgia, in Armenia, in Hong Kong, even in the US. But most of all, of course, it applies to Ukraine and the Euromaidan protests that took place in 2013 – 2014.

In fact, most of the disinformation tropes targeting popular protests were first coined by pro-Kremlin media during the Euromaidan protests. These were depicted as a colour revolution and a coup d’état, orchestrated and funded by America and Europe, incited by secret services, fuelled by neo-Nazis and Russophobes, leading to economic and political chaos.

The Euromaidan, guided by a spirit of transparency and democracy, was an abomination in the eyes of the pro-Kremlin media and a warning about the power of genuine grassroot protests. This explains why, almost seven years later, pro-Kremlin outlets continue to circulate the same disinformation clichés regardless of whether it targets public protests in Yerevan, Minneapolis or Minsk.

When it comes to Belarus, pro-Kremlin media were in no rush to defend embattled incumbent President Alyaksandr Lukashenka. Evening news reports on Russian state-controlled TV channels showed crowds in Belarus chanting “go away” to Lukashenka, as he tried to rally industrial workers at a factory in Minsk (a segment that was censored from Belarusian state TV). On Sunday evening, the Kremlin’s propagandist Vladimir Solovyev lamented violence against the protesters, not least because several Russian journalists, including employees of Sputnik news agency, were caught up it.

The fate of Alyaksandr Lukasenka is not the most important question to the pro-Kremlin media. Disinformation outlets talk instead about a colour revolution in Belarus — conducted according to the Maidan scenario and controlled from Poland with “trained” protesters, because it is a free will and determination of people taking to the streets and demanding accountability, that present a real danger, and hence are the target of pro-Kremlin disinformation.