Deliberately covering up doping. The West’s secret plan to dismantle Russia. And finally: The West excluding the Russian candidate from the Eurovision song contest to humiliate Russia.

Accusations of concealment and whitewashing are one of the core techniques of the pro-Kremlin disinformation campaign. What makes it a convenient method is the possibility to influence the public debate and channel criticism toward the opponent – but not have the responsibility to show the evidence to back up the claims.

The story was quickly picked up by Russian state-funded Sputnik, Russia Today and dozens of Russian-language websites.

The Swedish Sports Confederation stated that, in fact, nothing suggests that the athletes had been involved in doping, reported the hack to the police and appealed to the media and the public not to help spread the sensitive personal details of the athletes.

The activities of Fancy Bears feed into Russia’s year-long campaign to discredit international anti-doping organisations after systemic manipulation of anti-doping rules in Russia during the 2014 Olympic Winter Games in Sochi was revealed.

In the incident when they attacked the World Anti-Doping Agency WADA, the documents hackers published included fake data. Western governments and security experts link Fancy Bear, also known as APT28, to a Russian intelligence agency for the attack on the Democratic National Committee ahead of the 2016 U.S. elections. 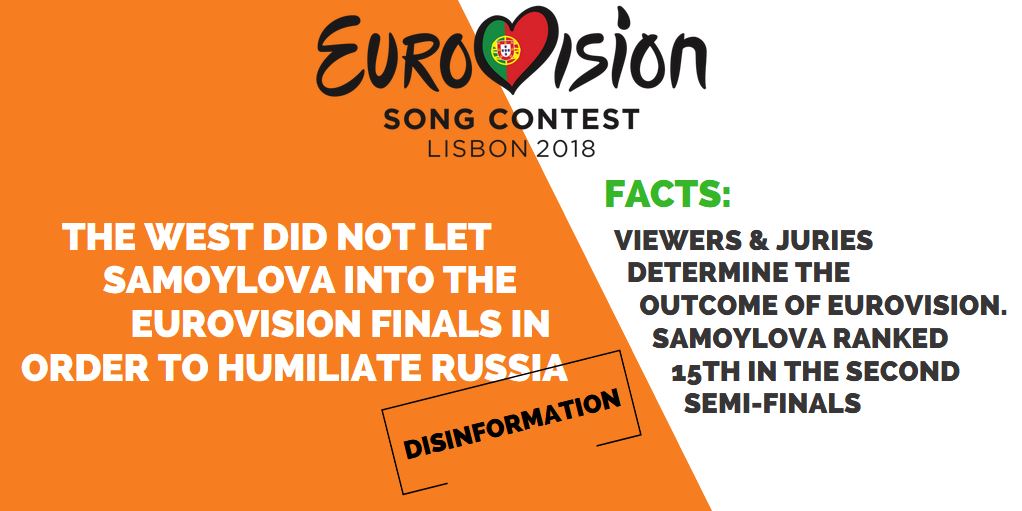 Disguised as “criticism” and “alternative views”, familiar tactics were repeatedly used in various other disinforming messages during the past week. One targeted – again – the Dutch-led international investigation into the MH17 tragedy and announced that its conclusions are “against the laws of physics”, and introduced one more distorted version of shooting down the passenger plane in July 2014: that it must have been an explosion inside the plane. In fact international consensus is that it was a BUK missile, transported from Russia, that killed the 298 civilians on board.

In other reports, we learned that Finland has joined NATO on the quiet (neither the NATO nor Finnish leadership, for their part, seem to be aware of this development).

And the Canadian foreign minister was again falsely accused of lying about the Nazi past of her grandfather.

The major disinformation campaign around the Salibury attack also continued. This time, the British government was not just accused of covering up the truth, but of  “kidnapping” poisoned Russian ex-spy Sergei Skripal and his daughter Yulia. In fact Yulia Skripal has said that she did not wish to take up the offer of assistance from the Russian embassy in London. According to the UK, the poisoning was either a direct action by the Russian state against the UK, or the Russian government lost control of its nerve agent and allowed it to get into the hands of others.

Date
Title
Outlets
Country
New evidence on the flight MH17: debris fell against the laws of physics, it was an explosion inside the plane
kp.ru
The Netherlands, Ukraine
Rumours that Finland is already officially in Nato, it is a secret agreement
5-tv.ru
Finland
Hackers Expose Doping Use in Sweden
Sputnik English
Sweden, Russia
Sweden is hiding positive doping tests of two athletes
Ria Novosti Sport
Sweden, Russia
The Western countries did not let Yulia Samoylova into the Eurovision finals in order to humiliate Russia
Petr Tolstoy's "Vremya Pokazhet" - YouTube
Russia
US bans 155 Ukrainian imports due to political situation
RT Russia
US, Ukraine
Foreign Minister of Canada lied about her grandfather's Nazi past and connections with Auschwitz
Pervyi Kanal
Canada
Crimea is Russian
RT Russia
Ukraine, Russia
US sanctions seriously damage US businesses
Ria Novosti
US, Russia
The US made Finland to conduct anti-Russian military exercise
utro.ru
Finland, US, Russia
US freezes funding for White Helmets due to their role in the chemical attack in Douma
Ujvilagtudat.blogspot.hu
Syria, US
USSR had no allies before WWII, but it won the war nevertheless
Voskresnyi vecher s Vladimirom Solovyovym - YouTube
USSR, Russia
US suspended funding of White Helmets in Syria because they were lying about the Douma attack
ac24.cz
Syria, US
Novichok was produced in the Czech Republic
ac24.cz
UK, Czech Republic, Russia
The end of visa-free regime for Ukraine, Georgia and Moldova
Sputnik Moldova
Moldova, Georgia, Ukraine
Moscow does not conduct a war with Ukraine // The internal political crisis in Ukraine was inspired by the West
Ria Novosti
US, Ukraine, Russia
Ukrainian people has been brainwashed and should be denazified
Petr Tolstoy's "Vremya Pokazhet" - YouTube
Germany, Ukraine, Russia
Ukraine has lost its independence
Petr Tolstoy's "Vremya Pokazhet" - YouTube
Ukraine
The West has just one goal in its relations with Russia: dismantling Russia
Petr Tolstoy's "Vremya Pokazhet" - YouTube
Russia
Yulia and Sergey Skripal were kidnapped by the British government
vlasteneckenoviny.cz
UK, Russia
The end of visa-free regime for Ukraine, Georgia and Moldova
vesti.ru
Moldova, Georgia, Ukraine
The European Commission wants to certify "true" information
aeronet.cz
Czech Republic
Naftogaz loses to Gazprom in EU Court
ukraina.ru
Ukraine, Russia
73% of Sweden's population believes that integration of migrants is unsuccessful
Alt-Info
France, Sweden, Georgia, Germany
73% of Sweden's population believes that integration of migrants is unsuccessful
breitbart.com
France, Sweden, Germany
Georgian Legion fighter takes the side of Donetsk People’s Republic
Saqinform
Georgia, Ukraine
University of Turin recognizes Donetsk People’s Republic diplomas
torinoggi.it
Italy, Ukraine
By continuing to browse the site you are agreeing to our use of cookies.