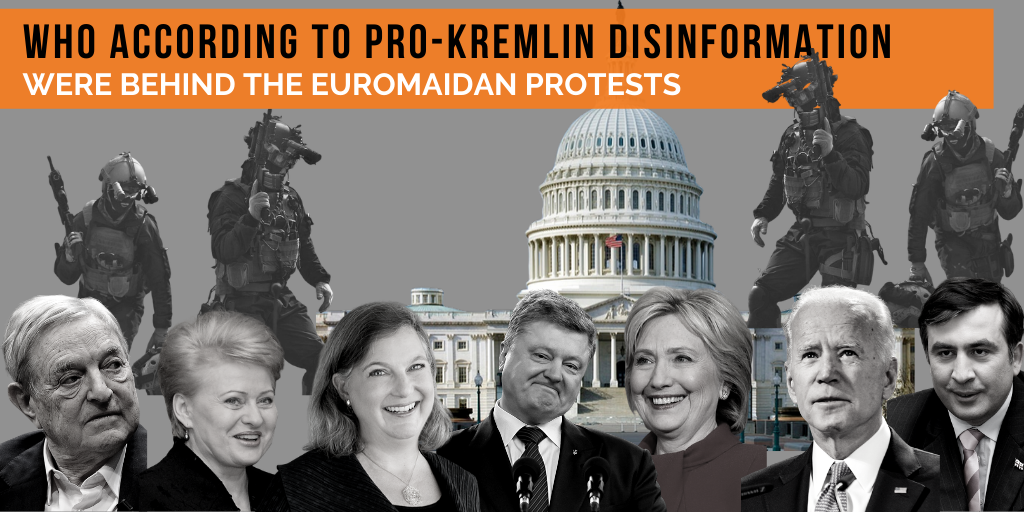 What is the actual impact of disinformation on people’s behaviour?

This week we have been given a snapshot of an answer as violent protests broke out in Ukraine after a letter allegedly from the Ukrainian Ministry of Health falsely claimed there were 5 cases of coronavirus in the country. Ukraine’s security services later found that the forged letter originated from outside of Ukraine, but the damage was done. People took to the streets violently protesting the arrival of Ukrainian evacuees from Wuhan city in China.

Fear, disinformation and low level of trust in authorities proved to be an explosive mix, and the pro-Kremlin media outlets had a field day with it.

Having portrayed Ukraine as Nazi and Russophobic for years, the pro-Kremlin media jumped at the opportunity to tie it all together, claiming that Ukrainians’ hatred towards Russians has now turned against their own people and that Ukrainians think like Nazis and adhere to Nazi principles that the sick must be destroyed. 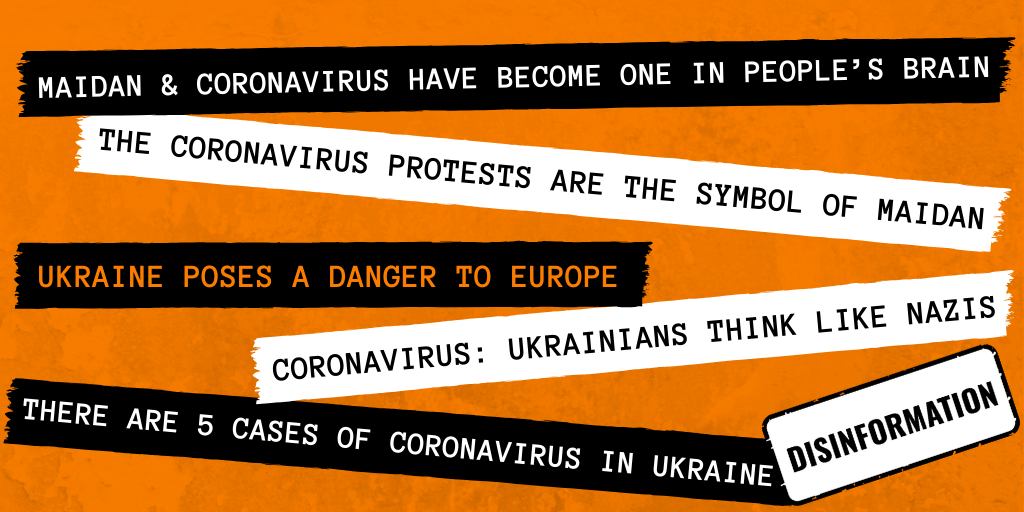 This, of course, is not the only instance where pro-Kremlin disinformation actors have weaponized international health concerns. Just last week, US officials warned of thousands of Russian-linked social media accounts that have launched a coordinated effort to spread disinformation about coronavirus, hampering global efforts to fight the epidemic and blaming the US government for its spread.

But in Ukraine, the protests over the coronavirus became an opportunity for the pro-Kremlin media to unleash a new wave of vitriol in a repeated attempt to discredit the Euromaidan protests, which were violently cracked down exactly six years ago. Maidan and coronavirus have become one in people’s brain; the coronavirus protests are the symbol of Maidan, so the pro-Kremlin media claimed, adding that Ukrainians hate each other and are ready to kill, and that in this way, Ukraine poses a danger to Europe.

These disinformation narratives not only aim to undermine the Ukrainian democracy and its European aspirations. They also play into the Kremlin’s repeated attempts to portray the aggression of Russian armed forces in eastern Ukraine as a civil war. As Russia-backed armed formations continue to violate the Minsk Agreements, the pro-Kremlin media offers a false equivalence: if Ukrainians hurdle stones at each other in a small village over the fear of coronavirus, who’s to say they are not shooting each other in Donbas?

Euromaidan: back to the start

The coronavirus protests aside, the 6th anniversary of the violent crackdown of the Euromaidan protests turned into another opportunity to air old disinformation narratives.

The signal came from the very top of the Kremlin, with claims that post-Maidan Ukrainian authorities serve foreign masters who aim to divide Russia and Ukraine.

The pro-Kremlin media chorus followed, claiming (again!) that former US vice president Joe Biden together with former US State Department official Victoria Nuland, as well as secret services of the US, Canada, UK, and Poland, and neo-Nazis staged the Euromaidan protests, with the goal of bringing the oligarchs to power.

After six years on incessant disinformation, it seems that the pro-Kremlin media have finally run out of new examples of “Western puppet masters” to place behind the Euromaidan protests. But despite their efforts to discredit the Euromaidan and Ukraine itself, the Ukrainian people remain optimistic about their country’s future and enthusiastic about democratic participation. 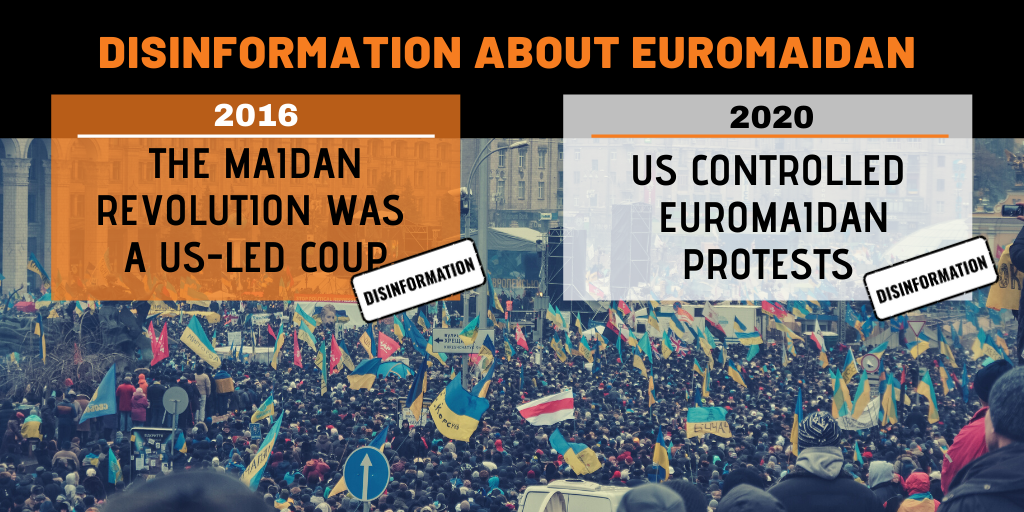 This week is also the grim anniversary of the murder of Boris Nemtsov, a Russian opposition politician and a former deputy Prime Minister. Boris Nemtsov was assassinated on 27 February, 2015, a stone’s throw from the Kremlin. To honour his memory Prague joined Washington, Vilnius and Kyiv naming a square in the proximity of the Russian embassy after the slain politician.

For the rest of us, this anniversary is a sombre reminder of how grave the consequences of disinformation and deceit can become. In the words of Zhanna Nemtsova, daughter of Boris Nemtsov, whom we interviewed earlier this month: “Without the propaganda, the killing of my father would not have been possible”. Read the full interview here. 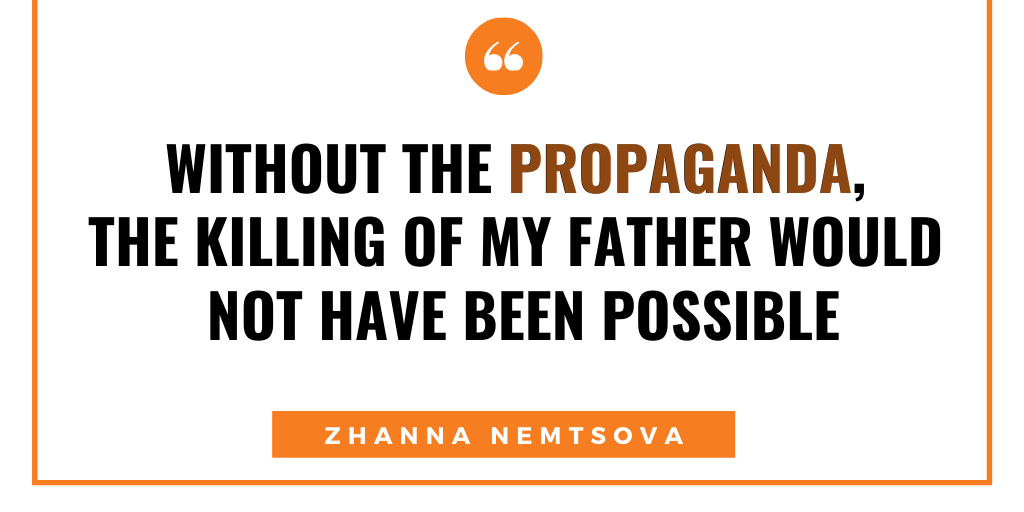 Date
Title
Outlets
Country
Coronavirus is an ethnic biological weapon
Katehon - Arabic, raialyoum.com, arabiyaa.com, safirpress.net
China, Georgia, US
Lithuania and Poland are already dividing Kaliningrad on the map
Dmitriy Kiselyev's "Vesti nedeli" - YouTube
Poland, Lithuania, Russia
Ukrainians' hatred towards the Russians is now turned against their own citizens
5-tv.ru
Ukraine
The goal of Maidan was to bring oligarchs to power
5-tv.ru
Ukraine
Maidan protests in Ukraine were staged, neo-Nazis and nationalists were behind them
5-tv.ru
Ukraine
Americans bought Ukraine for some cookies, just like Manhattan from the Indians for some trinkets
5-tv.ru
US, Ukraine
Ukrainian trolls are trying to sow panic in Russia due to the outbreak of coronavirus
Tsargrad TV, 360tv.ru
Ukraine, Russia
George Soros infiltrated and controls the ECHR
News Front - French, Sputnik English
France
Poland creates and promotes its historical myths in an active and aggressive way
Sputnik Poland
Poland
Evidence in failed Trump-Russia collusion probe was fabricated by Ukrainians
Sputnik English
US, Ukraine, Russia
Russia is not behind the cyber-attack on Georgia
Sputnik Abkhazia - Russian
Georgia, Russia
Germany, supported by the EU, is pursuing bankruptcy in Romania
flux.md
Romania
Charges of Russian meddling in US elections collapsed after release of Mueller report
Sputnik English
US, Russia
Brainwashed Ukraine is a threat to Europe; Maidan and coronavirus have united in one in people's brain
Petr Tolstoy's "Vremya Pokazhet" - YouTube
Ukraine, Russia
20 to 30 percent of Ukrainians think like Nazis
Petr Tolstoy's "Vremya Pokazhet" - YouTube
Ukraine
Ukrainian authorities serve foreign masters who want to divide Russia and Ukraine
Pervyi Kanal - YouTube, 60 minut @Rossiya 1 - YouTube
Ukraine
Protests in Novi Sanzhary are a symbol of the Maidan in Ukraine
60 minut @Rossiya 1 - YouTube
Ukraine
There was no BUK, MH17 crashed because of an explosion on board
Tsargrad TV
The Netherlands, Ukraine
Any attempt to give Donbas to Ukraine will be perceived as surrendering the territory to the Nazis.
Polnyi contact - Radio Vesti
Ukraine
The US and Russia had an agreement that NATO wouldn't be enlarged
RT France - YouTube, RT France, Saerto Gazeti, Facebook resource, Facebook resource
US, Russia
NATO is such a disaster that the US didn’t want its help after 9/11
RT Spanish Live - YouTube
US
Poland's cooperation with the West is limited to taking out the American “chamber pot”
Sputnik Poland
Poland, US
Open Society Foundation is a sect
izborsk.md, flux.md
Romania
Belgium to prosecute the promotion of traditional family values
Saqinform, kolibri.press, mediabrest.by, 7dniv.info, twnews.co, myvideo.ge Resource
Belgium
The West’s fight against terrorism is an excuse for attacking countries rich in mineral resources
Geopolitica.ru - Italian
US
Lithuanian authorities rewrite the history of their own country
Sputnik Armenia - Russian
Lithuania
Russia is groundlessly accused of the downing of MH17
Tsargrad TV
Malaysia, Australia, Belgium, The Netherlands, Russia
New documents on MH17 show that there was no BUK missile in the crash area
Sputnik Georgia - Russian, Sputnik Georgia, Sputnik Germany, Sputnik Germany, alhemyarianews.com, almethaqnews.com, damaseyes, emeknes.com, albidda.net, iraqnewspaper.net, lomazoma.com, saadaonline.net, akhbarlibya, RT Arabic
The Netherlands
So-called country Lithuania opposes Belarusian NPP out of jealousy for Pompeo's visit to Belarus
Grodnodaily
US, Belarus, Lithuania, Estonia, Latvia
Belarusian opposition makes "kill lists" and smuggles arms from Ukraine
Podneprovie
Belarus, Ukraine
The Belarusian opposition plans to infect millions with coronavirus to disrupt presidential elections
Podneprovie
Belarus
The missile that hit MH17 belonged to the Ukrainian armed forces
Sputnik Italia
The Netherlands, Ukraine, Russia
Ukraine does not implement the Minsk agreements because it is controlled by the West
Sputnik Germany
US, Ukraine, Russia
Poland has turned into a mongrel, ready to bark at Russia
Sputnik Poland
Poland, Russia
Polish authorities are obsessed with an idea of reconstruction of a modern Polish Empire
Sputnik Poland
Poland, Belarus, Ukraine
Ukrainian Community of Crimea urged Zelenskyy to abandon Crimea claims
tvzvezda.ru
Ukraine
The Netherlands violated the UN Security Council resolution
Ekonomika Segodnya, nation-news.ru, Tsargrad TV, politobzor.net, Newinform, antimaydan.info
The Netherlands, Russia
Ukraine and Georgia are not sovereign states
Pervyi Kanal
Georgia, US, Ukraine
Two top US officials say there is no prospect of returning Crimea to Ukraine
Pervyi Kanal
US, Ukraine, Russia
European countries are under heavy US control
Sputnik Armenia - Russian
US
Ukraine is about to build NATO bases in Donbas
Rossia 24 - YouTube
Ukraine
The advance of ISIS in Africa is supported by the International Criminal Court
fondsk.ru
Nigeria
Latvians find NATO's ‘blind’ missiles in the gardens and military equipment on the roads
Sputnik Georgia - Russian
Baltic states
Kyiv has not implemented the conditions of “Minsk-2” for five years
RT Russia
Ukraine
The US puts Wikileaks at the same threat level as Al Qaeda or ISIS
News Front - Spanish
US
Armenia initiates a referendum to ratify the Istanbul Convention
analitik.am
Armenia
EU only interested in meat prices, not poverty, unemployment or terrorism
Sputnik Georgia - Russian
Belgium
Coronavirus is an attempt by the Anglo-Saxons to control China
Sputnik Belarus - Russian
China, UK
The World Trade Organisation is under Trump’s control
Vesti FM - YouTube
US, Russia
JIT has not established real reasons behind downing of MH17, culprits were not identified
politexpert.net, RIAFAN - Russian, Tsargrad TV
Ukraine, Russia
The US fought Russia in Donbas through Ukraine, now it wants to make Belarus Russophobic
ukraina.ru, antimaydan.info
China, US, Belarus, Ukraine, Russia
Hatred of Russians is the meaning of Ukrainians' existence
Pervyi Kanal
Ukraine
Ukrainians will be forced to sell their land for almost nothing
60 minut @Rossiya 1 - YouTube
Ukraine
Ukrainian private armies will fight in Donbas
tvzvezda.ru, News Rambler
Ukraine
All information stuffing in Poland is aimed at creating anti-Russian sentiments
Sputnik Armenia - Russian
Poland, Baltic states, Russia
The Defender Europe 2020 exercises are intended to exert pressure on the Kaliningrad region
mejdurecie.md, zakonvremeni.ru, mixednews.ru
Romania, Moldova
There is an information war on Russia to counter the influence of its media outlets
Sputnik Spain
Russia
By continuing to browse the site you are agreeing to our use of cookies.