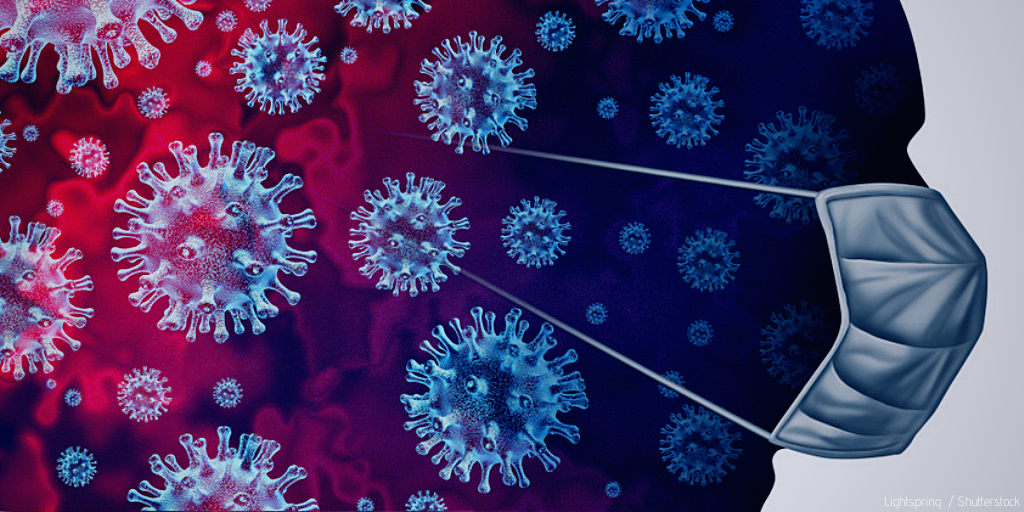 As the news about a previously unknown respiratory virus – which has already claimed over 100 lives – spreads around the world, so do the conspiracy theories.

A mysterious disease that jumped the species barrier from animals to humans with potentially lethal consequences ticks all the “fit-for-conspiracy” boxes: the subject is alarming, highly complex and so far entails more questions than answers. For the pro-Kremlin media, the coronavirus is beginning to look like a disinformation gold-mine.

“It’s an American weapon of mass destruction, aimed against China, coming from one of the US military labs that surround Russia and China, for the benefit of Big Pharma and American corporations”:  the pro-Kremlin disinformation machine follows its usual outlandish yet familiar logic. After all, one of the most famous and successful examples of Soviet disinformation was the HIV hoax planted by the KGB in the 1980s, which claimed that the HIV virus was created by the CIA as a biological weapon.

More recently, in 2016, pro-Kremlin outlets alleged that the Zika virus was owned by American and British corporations. Cancer, syphilis, and Spanish flu have also been labelled American biological weapons. Ukraine has been accused of spreading Ebola on behalf of the US military among pro-Russian separatists. And the narrative about secret US military labs in Russia’s neighbourhood spreading all sorts of diseases is so prevalent that around 20% of Georgians believe it to be true in case of the Lugar lab in Tbilisi. (It is not).

As the coronavirus continues to spread and authorities race against time to contain it, watch out for the proliferation of disinformation stories, which have all the potential to go viral, with horrifying consequences.

The attack against Poland continues

Poland was accused of trying to obsessively whitewash Hitler’s history, justify Nazism and provide a model for building Auschwitz. As horrid as they are, especially in light of the International Day of Commemoration in Memory of the Victims of the Holocaust, such disinformation messages are hardly surprising.

As EUvsDisinfo wrote previously, Poland is a carefully chosen target of a broad disinformation campaign. It was launched as a reaction to the resolution of the European Parliament “On the importance of European Remembrance for the future of Europe”.

It appears that the resolution, which expressed concern at “the efforts of the current Russian leadership to whitewash crimes committed by the Soviet totalitarian regime” was taken as an insult by pro-Kremlin circles. Since mid-September, when the resolution was adopted, the pro-Kremlin media has aggressively engaged in historical revisionism, smearing Poland and the European Parliament.

This week was no exception, with pundits on Russian state-controlled TV suggesting that if it weren’t for the activism of American Jews, the European Parliament would adopt a resolution blaming Jews for the start of the WWII.

With over a dozen of new disinformation cases targeting Poland this week, it seems that the Kremlin’s instrumentalization of history is continuing in full force, with no signs of stopping. 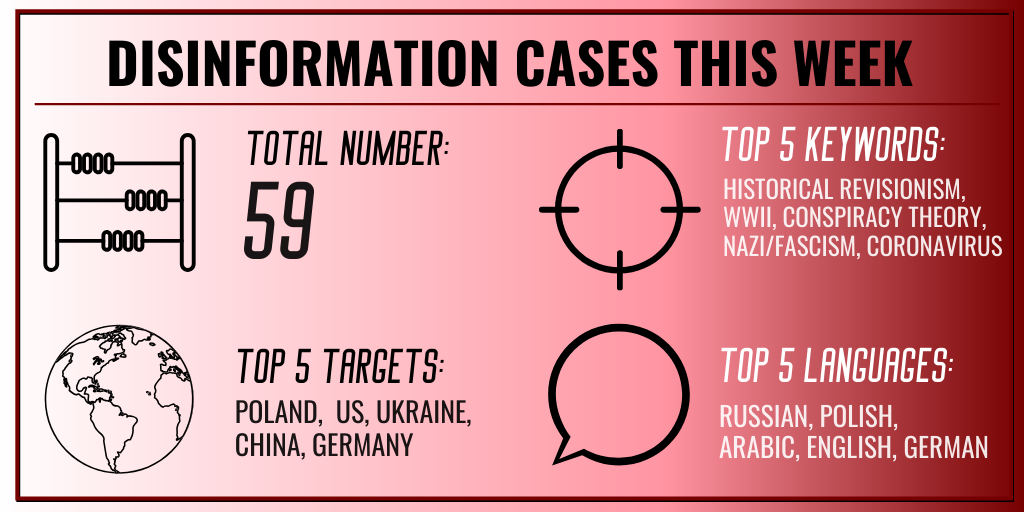 Date
Title
Outlets
Country
The coronavirus is a biological weapon created by the UK
China, UK
Coronavirus targets exclusively one race
China, US
Poland ran out of EU money; Poland's demands for reparations is just a tacky attempt to get money
Poland, Ukraine
Big Pharma profits from coronavirus panic
China
The China coronavirus looks like a US set up
China, US
US technology is behind the outbreak of the corona virus - it's just business
US
Coronavirus might be US bacteriological weapon against China
Georgia, US
Auschwitz was modeled on Polish example
Poland, Russia
France and Britain gained financially from the concentration camps
Poland, Russia
Polish Home Army was cooperating with the Nazis and got rich from the concentration camps
Poland, Russia
Baltic States ignored the commemoration of the 75th anniversary of liberation of Auschwitz
Baltic states
Soros's movements have led to hundreds of thousands of deaths around the world
Venezuela, Iran, UK, Georgia, US, Ukraine, Russia
Baltic States laugh at the memory of millions who perished in Holocaust
Baltic states
"Thunberg kids" are twisting facts: man has nothing to do with climate change
Russia
The Chinese coronavirus is a US provocation
China, US
Coronavirus might be a biological weapon
China, US
The European Parliament resolution on the Molotov-Ribbentrop Pact is aimed at the demonisation of Russia
Poland, Russia
CIA reveals that the ‘Hero of Ukraine’ Stepan Bandera worked for Hitler
Ukraine
Russophobia is thriving in today's world
Poland, US, Baltic states, Ukraine
Poland leads a campaign whose ultimate goal is to destroy Russia
Poland, Russia
Migrant violence strikes the city of Stockholm; authorities ask not to worry
Sweden
China coronavirus was predicted by Nostradamus
China
The new coronavirus is a US biological weapon
China, US
Warsaw rewriting WWII history for propaganda purposes
USSR, Poland, Germany, Russia
A new Chinese coronavirus was likely elaborated in NATO biolabs
China, US
Over 80,000 people froze to death in the US during this winter
US
The West is trying to destroy Russia by destroying the very understanding of truth
Russia
Soros' office is involved in active transgender propaganda
Armenia
Poland did not invite President Putin for the commemorations of the 75th Anniversary of the Auschwitz liberation
Poland, Russia
NATO will be using Ukrainians in military conflicts around the world
Ukraine
Poland wants to make money out of WWII, justifies Nazism
Poland, Russia
Poland entered into a conspiracy with fascist Germany
USSR, Poland, Russia
March 5, 1946, Churchill announced his "Iron Curtain" against communism
UK, US
Poland was an ally of Nazi Germany and had a role in the outbreak of WWII
USSR, Poland, Russia
Since 2018 Armenia is under Anglo-American occupation, similar to Nazi operations
Armenia
Poland tries to adjust history to politics, misinterpreting the historical facts
Poland
The Polish authorities are overtaken by Russophobic hysteria and historical arrogance
Poland, Russia
Trump wants "to clear out" US Democratic Party supporters in the Ukrainian government
Ukraine
The sanctions put on Dmitry Kiselyov do not concern the RT agency
Estonia, Russia
Poland was liberated thanks to the Soviet Army
USSR, Poland
Suspension of Sputnik Estonia is censorship
Estonia
The Red Army could not support the Warsaw Uprising
Poland, Russia
Lined up with the US, the EU never took independent decisions
Germany, US
Nazi-Soviet Non-Aggression Pact was a direct result of British, French and Polish politics
UK, Czech Republic, France, Poland, Germany, Russia
Poland is avoiding discussion on difficult historical issues by refusing to take part in World Holocaust Forum
Israel, Poland, Russia
The European Parliament attacks Christian values in Romania
Romania
Ukraine was staging a terrorist attack before Putin's visit
Ukraine
The EU is trying to disrupt Belarus-Russia relations
Poland, Belarus, Lithuania, Ukraine, Russia
"Russian threat" is only a pretext to station NATO military contingents near Russian borders
Poland, US, Baltic states, Russia
US stops issuing visas in Armenia due to tense situation in region
Armenia, Iran, US
NATO openly participates in the Donbas conflict
US, Ukraine, Russia
Poles obsessively try to whitewash Hitler's history
USSR, Poland, Germany, Russia
Estonian regime is publicly persecuting its citizens
Estonia, Ukraine, Russia
Little has changed since Nazi Europe
USSR, Poland, Germany, Russia
Aim of the Eastern Partnership is to separate Russia's neighbours from it
Azerbaijan, Armenia, Georgia, Belarus, Ukraine, Russia
Poland was an ally of Nazis
USSR, Poland, Germany, Russia
People who seized power in Ukraine, in 2014, are Nazis
Ukraine
Polish view on the Polish-Soviet War of 1919-1920 goes against historical facts
Poland, Ukraine, Russia