Last week, the Disinformation Review highlighted the cynical opportunism of the pro-Kremlin media in exploiting the racial injustice protests sweeping across America and the world. The efforts by Russian state media and pro-Kremlin outlets to exploit the situation for political objectives, internationally as well as domestically, showed a distinct contrast in coverage for Western versus Russian-speaking audiences. That trend continued this week, with pro-Kremlin outlets spreading the usual conspiracy theories – modified for the topic of the day – as well as divisive messages related to the protests. While there is scant evidence of a covert coordinated influence effort like around the 2016 US election, there is rapidly growing evidence that the pro-Kremlin media is actively instrumentalising the US crisis to push its preferred narratives and advance an anti-liberal, anti-Western agenda.

Several cases this week attempt to link the protests with America’s supposed penchant for fomenting “colour revolutions” and meddling in the affairs of other states. For example, we saw claims that the protests are “extremely reminiscent of the techniques of a colour revolution” and a “dress rehearsal” of the Orange Revolution – even alleging that the US prepared people in different parts of the world to organise them. It is well known that the power of popular mobilisation is one of the Kremlin’s greatest political anxieties regarding regime stability, given the trend of civic revolutions against corruption-prone regimes in post-Soviet countries. As a result, the pro-Kremlin media have a habit of suggesting that demonstrations anywhere, of any sort, must be orchestrated by malevolent outside forces. The present unrest in the US is no exception, with suggested culprits including America’s “ruling elites”, globalist corporations, the Democratic Party – seeking to gain influence ahead of the upcoming presidential election – and of course George Soros, who is supposedly encouraging riots and pogroms by the black population and trying to prevent Trump’s re-election, in cahoots with the Democrats. Soros is a popular bogeyman in pro-Kremlin disinformation thanks to his philanthropic work and promotion of democracy and free markets. By painting him as an instigator of the current US protests, the pro-Kremlin media also pushes the message in other countries that Soros’ Open Society Foundation should be banned.

Other disinformation cases we recorded this week involved the amplification of divisive messages and portrayals of the US as on the verge of collapse due to an impending “civil war”. For example, Sputnik claimed that the fate of the United States is at stake thanks to a “political game” verging on civil war to thwart Trump’s re-election. Other inflammatory messages included claims that blacks commit 80% of crimes in the US, that America has a choice between racism and anarchy, and that children in the West are taught to fear and hate the police.

Finally, the pro-Kremlin media never passes up an opportunity to target Ukraine. For example, the US protestors are compared with non-existent Nazis in Ukraine, and President Zelenskyy is advised to use the current chaos to secure Ukraine’s independence from the US. 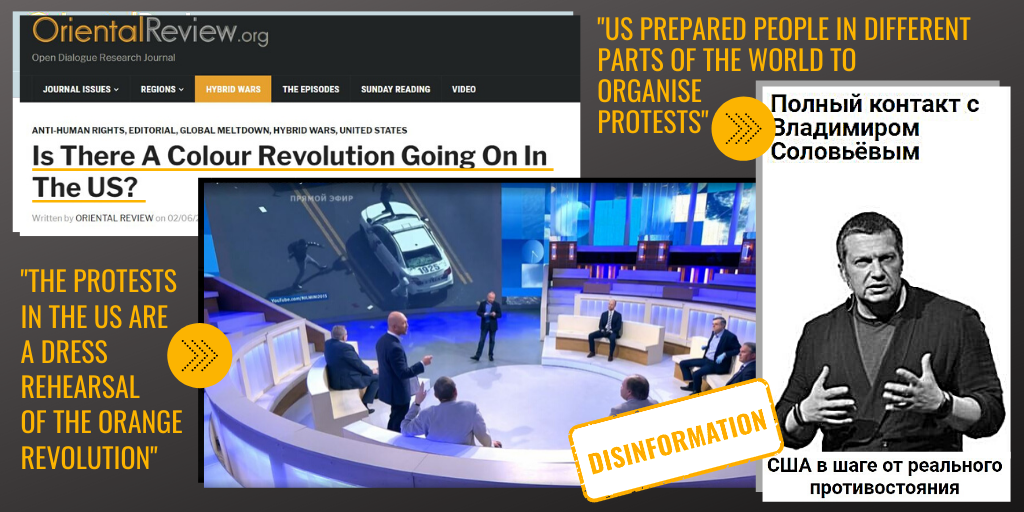 While concerns persist about a potential second wave of COVID-19 as countries relax restrictions, the pro-Kremlin media is showing renewed appetite for coronavirus-related disinformation. Indeed, the involvement of foreign actors like Russia and China in spreading disinformation and amplifying conspiracy theories about COVID-19 has been highlighted in a new Communication by European Commission Vice President Věra Jourová and High Representative Josep Borrell, presented on Wednesday.

The cases we saw this week were mostly rote repetition of the narratives recorded previously. The coronavirus has destroyed the European Union and proved NATO worthless. Bill Gates is behind the virus and plans to use vaccines to cull the world population. The West has responded to the pandemic by sacrificing the sick and elderly, but at the same time exaggerated the threat thanks to “matriarchal hysteria”.

Claims that the coronavirus came from a laboratory and is artificially made remain especially common. These also feed into another common trope in pro-Kremlin disinformation, for which the pandemic provides especially fertile soil: that the US is operating biolabs around the world and creating ethnic weapons. For example, we saw claims that US laboratories in Ukraine are testing bioweapons on Slav populations, and that people of Armenia, Georgia, Ukraine and Kazakhstan are “biomaterial” for the Pentagon. In these scenarios, Russia is of course portrayed as the ultimate victim of US aggression.

So what’s this week’s takeaway? Never let a good crisis go to waste – that is the unspoken motto of certain pro-Kremlin media. The tragedy and suffering of others often makes the best fuel for the disinformation fire. 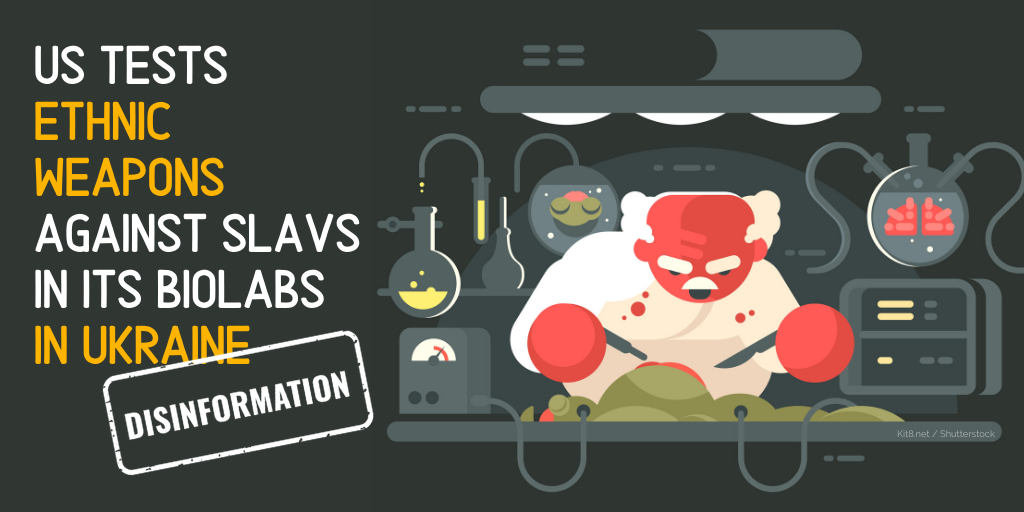 Date
Title
Outlets
Country
US tests ethnic weapons against Slavs in its biolabs in Ukraine
US, Ukraine
Children in the West are taught to fear and hate the police
US
Military exercises, like Defender 2020, are directed against Russia
Poland, Russia
US investigative journalist is confident that Soros is behind George Floyd protests in US
US
Riots in the US are a chance for Zelenskyy to get independence for Ukraine
US, Ukraine
US unrest is a second civil war
US
The US is on the verge of civil war. This is a political game to prevent Trump from being re-elected.
US
UK Royal Air Force claims to have saved Lithuania from Russia
UK, Lithuania, Russia
Russiagate has dominated main US media since the 2016 despite lack of evidence to support alleged Russian interference
US, Russia
The protests in the US is a standoff between Trump and the globalist corporations
US
The US Defender 2020 manoeuvre is directed against Russia
US, Russia
The law on non-profit organisations in Moldova can lead to the loss of state sovereignty
EU, Moldova
Blacks commit 80% of crimes against the person in US
US
Bill Gates wants to use vaccines to cull humanity
US, Russia
The investigations on alleged Russian interference in the 2016 US elections produced no evidence of such interference
US, Russia
The Guardian points to ruling elite as the real instigators of the US crisis
US
Berlin’s allegations of Russia's “hacker attacks” to the Bundestag are nonsense and absurdity
Germany, Russia
EU wants to expand towards East by destabilising the Caucasus
EU, Russia
Historical Crimean Russian land returned
Ukraine, Russia
COVID-19 is an artificial virus from a laboratory in China
China
Soros financing violent protests in the US. Georgia should ban the Open Society Foundation
US
The protests in the US may be a colour revolution orchestrated by those who promoted the fake Russiagate
China, Bolivia, Serbia, US, Ukraine
Crimea became part of Russia after the events of 2014 in Ukraine
Ukraine, Russia
Symbols used during the protests in US prove they are directed by Soros and the Democratic party
US
Americans provoked the overthrow of legitimate authority in Ukraine and civil war in Donbas
US, Ukraine
The protests in the US are a dress rehearsal of the Orange Revolution
US
Polish actions against Nord Stream 2 are inconsistent with EU policies – they promote the US interests
EU, Poland, US, Russia
America has a choice between racism and anarchy. NY governor did nothing to stop the crime
US
West falsely claims Russian media not free
The Netherlands, Russia
Soros backs George Floyd protests in US, Bill Gates looms nearby
US
Russia isn't and wasn't involved in the Donbas conflict
Ukraine
US prepared people in different parts of the world to organise protests
US, Russia
The protests in the US are reminiscent of colour revolution technique
US
Protests in the US are organised by the Democratic party ahead of the presidential election
US, Russia
The Centre for Polish-Russian Dialogue and Understanding ordered research legitimising confrontational Eastern policy of Poland
Poland, Russia
Protesters in the US are doing the same what Nazis are doing in Ukraine
US, Ukraine
The IMF has launched the “Ost” plan in Ukraine
Germany, Ukraine
In Poland, the Red Army monuments are destroyed as a result of politicians' decisions
Poland, US
Ukrainian economy will not survive without Russia
EU, Ukraine, Russia
Illegal EU sanctions hinder Syria's ability to fight COVID19
EU, Syria
EU supporting terrorism against the Syrian state
EU, Syria, US
The West relied on the Malthusian theory during coronavirus
EU, UK, US
Zelenskyy's ruling is complete failure: Nazis feel well, Ukraine remains anti-Russian
US, Ukraine, Russia
COVID-19 came from a laboratory
China
Western countries prohibit COVID-19-affected countries from contacting Russia for help
EU, US, Russia
Pentagon controls the work of 15 bacteriological laboratories in Ukraine
US, Ukraine
The MH17 disaster was planned by Ukrainian, American, and Dutch intelligence agencies
The Netherlands, US, Ukraine, Russia
The people of Armenia, Georgia, Ukraine and Kazakhstan are "biomaterial" for the Pentagon
Kazakhstan, Armenia, Georgia, US, Ukraine
Kyiv occupants are robbing residents of citizens of the Donetsk region
Ukraine
US tests biological weapons on Ukrainians to further attack Russia
US, Ukraine, Russia
Three Seas Initiative is a tool of American hegemony in post-Soviet areas surrounding Russia
Poland, US, Russia
Crimea left Ukraine as a result of a referendum after coup in Kyiv
EU, Ukraine
Bill Gates had predicted the appearance of a virus that looked very much like coronavirus
US
Demonstrators want to continue the war in Donbas
Ukraine
The return of Crimea caused Western hostility against Russia
EU, US, Ukraine, Russia
The matriarchal societies of the West have reacted hysterically to the coronavirus imposing unnecessary mass quarantines
China, Iran, US
Western women told to become similar to over-aggressive men to survive and thrive in capitalist-imperialist societies
EU, US
UN Security Council held honest dialogue with Russia about Crimea
EU, UK, France, US, Ukraine, Russia
Zelenskyу introduces tax on war and coronavirus in Ukraine
Ukraine
Sabotage, imitation and profanity - what Ukraine is doing in the Donbas peace negotiation process
Ukraine
Kyiv considers Crimea “its own” contrary to all international standards
Ukraine, Russia
Crimean Tatars in Crimea receive great support from Russia
Ukraine, Russia
The main goal of American bio-labs is to surround Russia and hit it with bioweapons
US, Russia
Ukraine has become a neocolony of the West
Ukraine
NATO will invade western regions of Ukraine
Hungary, US, Ukraine
Only a few thousand Muslims live in Ukraine, they do not need public holidays
Ukraine
Coronavirus has destroyed the European Union
EU, Italy
"Wife" and "husband" became banned words
New Zealand, Ireland, Australia, Canada, UK, US
Europe, including Germany, is subjected to Washington's power
EU, Germany, US, Russia
Coronavirus proved that NATO is pointless
EU
US and EU congratulate DNR and LNR on Independence Day
EU, US, Ukraine
To overcome coronavirus implications Poland may need to become part of Big Germany
Poland, Germany
Ethnic weapons have already been created
Armenia, Russia
Bill Gates vaccination in India leaves 490,000 children paralysed
India