“Czechoslovakia should be grateful to the USSR for 1968” 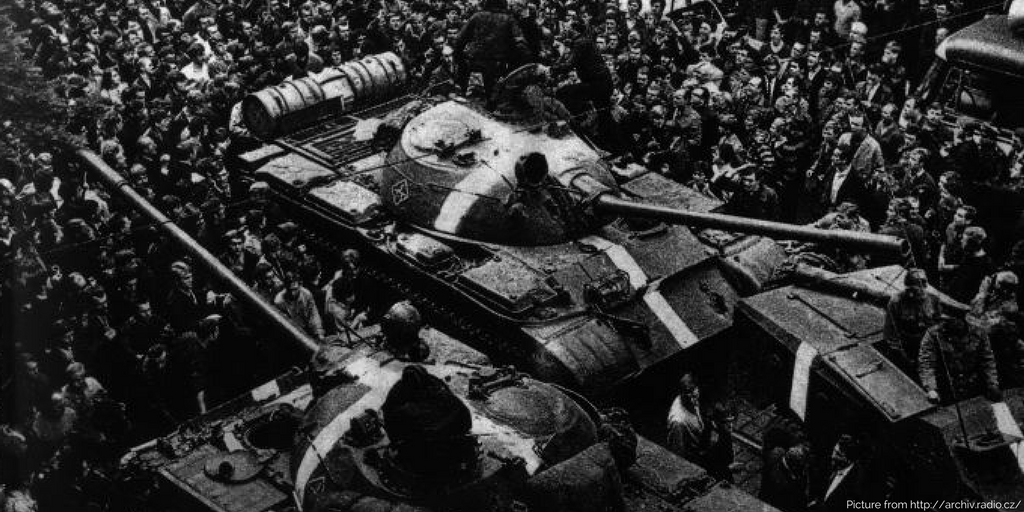 On 21 November, the official TV channel of Russia’s Ministry of Defence, Zvezda, published an analytical article on its website under the headline “Czechoslovakia should be grateful to the USSR for 1968: The history of ‘the Prague Spring.’” The publication coincided with the first day of the visit to Russia by the President of the Czech Republic, Miloš Zeman. As reported by Radio Prague, both the Czech President and other leading Czech politicians reacted strongly to the publication, calling its claims “outright lies” and the author “completely brainwashed”.

Taken down after Czech protests

The independent Russian outlet Meduza’s research into the editing history on Zvezda’s website shows that after the negative reactions began to emerge, some elements in the article, including its headline, were first made more neutral, e.g. by changing the headline to “Czechoslovakia, 1968: The history of ‘the Prague Spring.” However, after the Czech President protested about the article at his meeting with Russian Prime Minister Dmitry Medvedev, the article was taken down completely by Zvezda. The fact that the article would stir negative reactions was apparently no surprise for Zvezda: Even its initial version includes a line at the very end that “the opinion expressed by the author might not coincide with that of Zvezda”. The orginal article in its full length can be found via this link.

“404 page not found,” TV Zvezda’s website now says if you try to use the link to the story about the Prague Spring.

The Prague Spring = The Maidan Revolution

Below we have translated a number of highlights from the article, all of which underline how, on top of the historical revisionism, the narrative about the Prague Spring can be read as a comment on current political affairs in and around Ukraine, and to current relations between Russia and the West. A central claim made by the text is that the intervention in Czechoslovakia prevented events similar to the Maidan Revolution in Ukraine from happening. In order to illustrate the way the article’s historical claims are tied to the narrative about Ukraine and Russia’s relations to the West, we have added links to relevant search results in our database of more than 3,500 examples of pro-Kremlin disinformation. The search results illustrate how closely the claims in Zvezda’s article are to key concepts in modern pro-Kremlin disinformation:

Zvezda’s article: “The entry of troops into Czechoslovakia in 1968 made it impossible for the West to organise a coup d’etat in Czechoslovakia through the technology of making “velvet” revolutions and kept for more than 20 years a life of peace and harmony for all the peoples of the countries of the Warsaw Treaty Organization”.

Zvezda’s article: “All these factors contributed to the emergence of antisocialist and anti-Russian sentiments in society”.

Zvezda’s article said: “Socialism has always had a human face, but capitalism and liberalism have always been the face of the Hitlerites and similar liberals”

Zvezda’s article: “The leaders of the countries of the Warsaw Pact understood very well that the events in Czechoslovakia were a part of theadvance of NATO into the East”.

Zvezda’s article: ”The Vatican’s leadership recommended that the activities of the Catholic Church be directed to merge with the movement for independence and liberalization”.

Zvezda’s article said: “Now, in 2017 […] the West continues to wage a cold war against us, and Russophobia dominates all Western media. This suggests that the West is waging war not against a certain social system, but against the Russian state and its peoples for their geopolitical interests”.

For other examples from Zvezda, the official media outlet of Russia’s Ministry of Defence, follow this link to our database.

Further reading about historical revisionism as a part of the pro-Kremlin disinformation campaign:

The Nazi-obsession of pro-Kremlin propagandists