David Hume: Disinformation, the Slave of the Passions 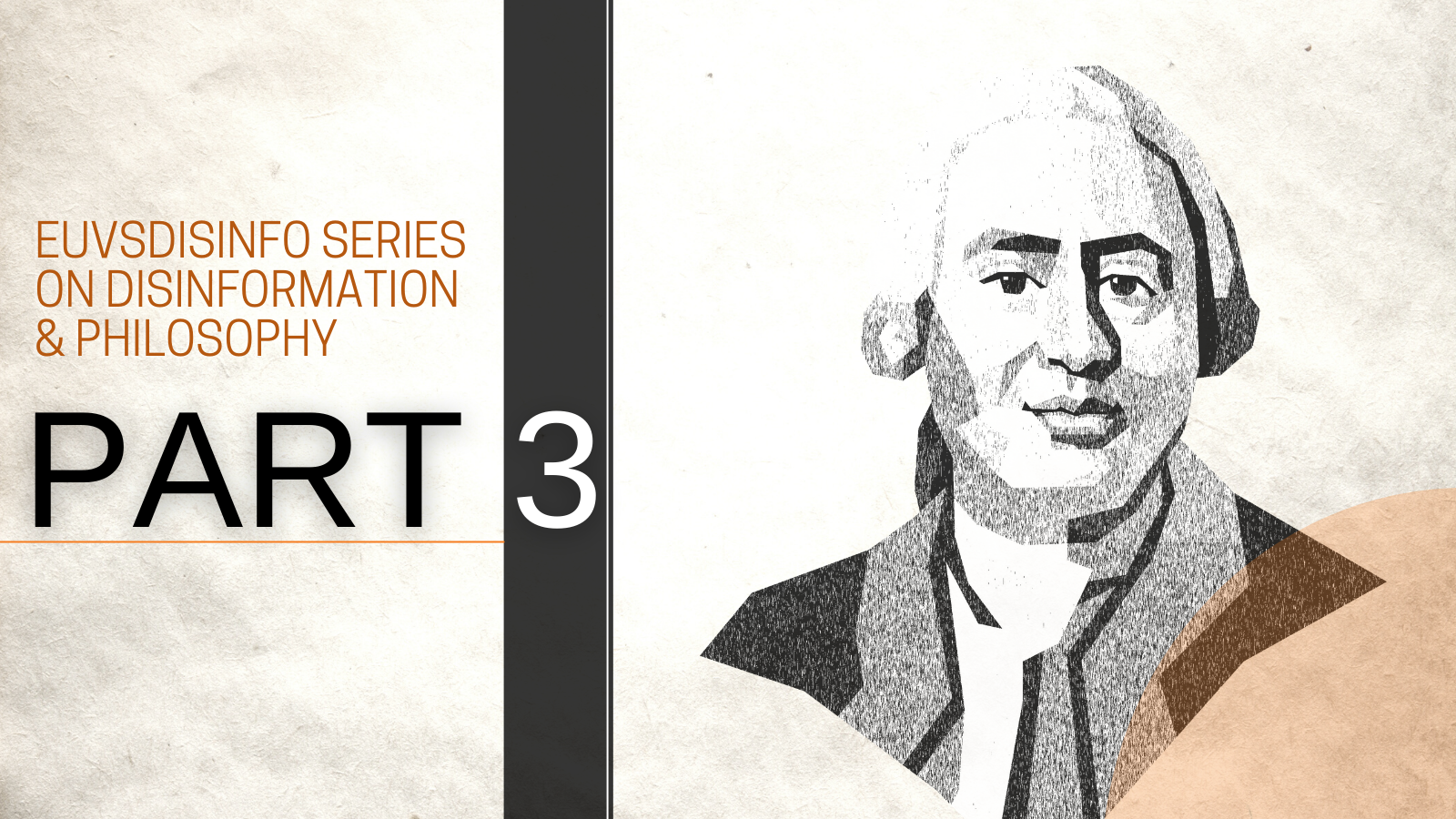 David Hume, who lived in the second half of the eighteenth century, was a Scottish philosopher and public intellectual. He is a philosopher’s philosopher. A few years back, thousands of philosophers selected him as the one with whom they most identified, ahead of Plato, Spinoza and Wittgenstein. His popularity is probably based on his highly influential philosophical empiricism and scepticism. Against Plato, Hume argued against the existence of innate ideas, claiming that human knowledge derives only from experience. This underscored the importance of the psychological basis of human nature, which Hume studied extensively. Perpetrators of disinformation profited from his insights, but so can we.

Hume swept aside Aristotle and especially Plato. It is not that Hume disliked antiquity, but something major had happened that needed integration into the philosophical equation.

Firstly, the Polish astronomer Copernicus formulated a model of the universe that placed the sun rather than the Earth at its centre. Secondly, Galileo discovered evidence to support Copernicus’ heliocentric theory, as he observed four moons in orbit around Jupiter. Thirdly, Isaac Newton contributed to this paradigm shift, as he discovered the laws of gravity and motion, and invented calculus.

As these ideas contradicted much of the thinking of Aristotle and Plato, philosophy needed a new start. Thinkers from Hobbes to Descartes had aimed to integrate the new ideas of the natural sciences into philosophy. This ignited the Enlightenment, a movement centred on the idea that reason is the primary source of authority and legitimacy. New ideals such as liberty, progress, tolerance, constitutional government, and the separation of church and state emerged.

David Hume was one of the Enlightenment’s leading philosophers.

As Newton was Hume’s inspiration, he followed the Newtonian maxim “Hypotheses non fingo”, crudely, “I do not do hypotheses”. He believed any scientific law must be established by observation and experiment, there is no space for traditional a priori metaphysics.

This approach led to three sceptic views that are widely known, amongst philosophers at least.

First, our confidence in cause and effect, on which all thinking about matters of fact rests, is not justified by either observation or by logical deduction. Actually, we only ever see one thing following another: we never perceive any power that makes one thing necessitate an outcome.

Second, Hume is known for his arguments against dogmatic aspects of religion, although he never promoted atheism.

Slave of the Passions

The third view is what makes Hume really stand out. Although he lived in the ‘Age of Reason’, he famously proclaimed that “reason is, and ought only to be, the slave of the passions.”

Hume does not say, as some interpret him, that rationality is somehow distorted by the passions. Rather, he points out the emptiness of rationality. Rationality is nothing more than a tool to optimise a certain set of preferences, which are in the end based on emotions. He famously explained this emptiness with “Tis not contrary to reason to prefer the destruction of the whole world to the scratching of my finger.”

According to Hume, reason by itself provides no motivation to act, let alone principles that are able to carry morality. Consequently, to call someone “good” means we have a basic fellow-feeling, driving a sympathetic response to his suffering, or pleasure at the thought of his success. Meet anyone with different opinions? He is not irrational, but heartless.

As the Newton of morality, Hume tried to explain how perceptions of the mind come and go and merge into complex perceptions leading to human thought, belief, feeling and action. Ultimately, this view inspired many psychologists, including Freud.

Hume experienced disinformation. In his own time, falsehoods clustered especially around dynastic succession. A big lie that concerned Hume, was about a (fictitious) Jesuit conspiracy to assassinate the British King Charles II. This was part of a campaign by the Whig political party to exclude Charles’s Catholic brother from succession to the throne.

These days, it is pretty clear disinformation is also a slave of the passions. An MIT study found that false statements spread much more quickly and widely than true ones, probably because they’re more entertaining in that they target users’ emotions. Remarkably, Hume, in A Treatise of Human Nature (1739) wrote of what today we call “emotional contagion”, describing how affections pass from one to another.

As for our intellect, Hume demonstrated that what we call ‘rational’ is often hubris. As we wrote earlier, in the 20th century, the psychologists Daniel Kahneman and Amos Tversky showed that humans are wired to jump to conclusions (too) quickly. One example is confirmation bias: the tendency to search for, interpret, favour, and recall information in a way that confirms one’s prior beliefs or values. In 2019, we wrote about how confirmation bias can help make disinformation credible.

How should we deal with disinformation – and ourselves? Hume warned we should always be suspicious of the assumptions favoured by our passions. The stronger we feel about something, the more likely our feelings are to influence and bias our reasoning. On a personal level, this means we need to do more than involve a variety of sources, since we can always find reasons to dismiss evidence from the “other” side. At the very least, before critical thinking can emerge, we need introspection and to know our emotional positions.

On a macro level, our democracies need not only media plurality, but perhaps even theatre, comedians, music, and spirituality to help us get to know and talk about our own deepest feelings and moral presumptions, so we can hopefully prevent disinformation from exploiting them.