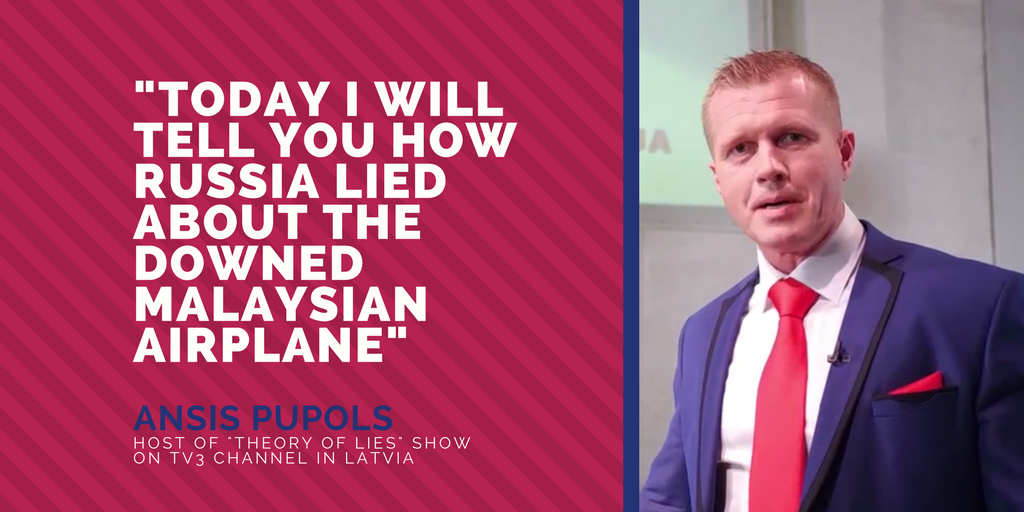 The most popular TV channel in Latvia – TV3 (http://skaties.lv/tv3/) – has started 2017 with a new Sunday evening show to uncover disinformation. This is the first time that a regular TV show about disinformation is offered in a prime time TV slot.

The first episode of the “Theory of Lies” started with well-respected investigative journalist Ansis Pupols introducing the key topic: “Today I will tell you how Russia lied about the downed Malaysian airplane”.

Mr. Pupols outlined facts proving that the MH-17 plane was shot down with a BUK missile system that entered from Russia – conclusions from the Joint Investigative Team, Bellingcat research, recorded separatist telephone conversations and then showed the extracts from Russian TV channels putting forward numerous fabricated theories in the aftermath of the incident. An invited expert from the Center for European Policy Analysis explained that numerous theories helped Kremlin to create noise and distract the attention of audience in Russia and abroad from the truth. This is an issue that the Disinformation Review has covered in the past, see our article Nine ways to confuse us about MH17 and an in-depth analysis below.

The sleek show with animated graphics supporting the arguments left no doubts to the viewer that the disinformation in Russian media is part of Kremlin’s strategy to influence public opinion.

The first episode was watched by many Latvians on Sunday evening. The following seven episodes promise to highlight the notorious crucified boy case, scaremongering with refugees and other disinformation stories.

Some facts about flight MH17

The case of flight MH17 is a good example of how disinformation seeks to provide many alternative false explanations in order to question belief in what really happened, and attempts to absolve those who committed this horrific act from responsibility for their actions.

On 17 July 2014 Malaysia Airlines flight MH17 crashed in eastern Ukraine. The plane was en route from Amsterdam to Kuala Lumpur. All 283 passengers and 15 crew members were killed.

Pro-Kremlin media advanced several competing and incoherent theories on the downing of MH17:
1. Ukrainian fighter jets were operating in the area around the crash, supposedly confirmed by a Spanish air traffic controller working in Ukraine named Carlos (Rossiya/Vesti: http://bit.ly/2evv8Xa);
2. The aim of the Ukrainian Air Force had been to shoot down President Putin’s plane (Lifenews: http://bit.ly/2eRF7nR);
3. For some “unknown reasons”, Ukraine had ordered the plane to descend just before the catastrophe (also Lifenews);
4. Local eyewitnesses said that some of the dead bodies had looked “unfresh”, and suggested that the plane had been loaded with dead bodies when it took off from Amsterdam (Ruskaya Vesna: http://bit.ly/1n0rQbC);
5. MH17 was in fact flight MH370, which disappeared in March 2014 in Asia, a claim based on the suggestion that no relatives of those killed on board MH17 had been identified (News2: http://bit.ly/2eGpWNO).
The Russian Government has also attempted to explain what happened, in different versions:
6. In July 2014, the Russian Ministry of Defence presented radar imagery to allege there was a Ukrainian jet close to MH17, and that Ukraine had moved BUK missiles closer to “rebel” territory;
7. Two years later, the Russian Ministry of Defence presented a different set of radar imagery.
In addition, photo-shopped images were used to support the Kremlin’s narrative on MH17. See for example the below images, the first an original Reuters photo, the second a faked version shared on Facebook http://bit.ly/2hj9GDe; and a report on this pro-Kremlin fake here: http://f24.my/2i5LN2a. 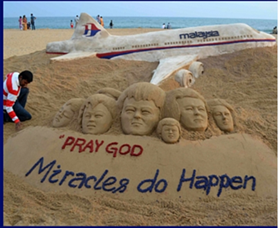 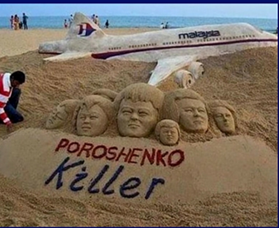 The task of conducting the criminal investigation into the downing of MH17 rests with the international Joint Investigative Team. This comprises representatives of the Dutch Public Prosecutor’s Office and National Police, together with police and judicial authorities of Australia, Belgium, Malaysia and Ukraine. Its aim is to establish the facts, identify those responsible for the crash and collect evidence which can be used in court.

The technical report of the Joint Investigative Team concluded that the missile that shot down MH17 was fired from a Russian vehicle that crossed into Ukraine and then back to Russia again afterwards: http://bit.ly/2d980Nz. Recordings from intercepted phone calls and multiple eye-witnesses have substantiated their findings.