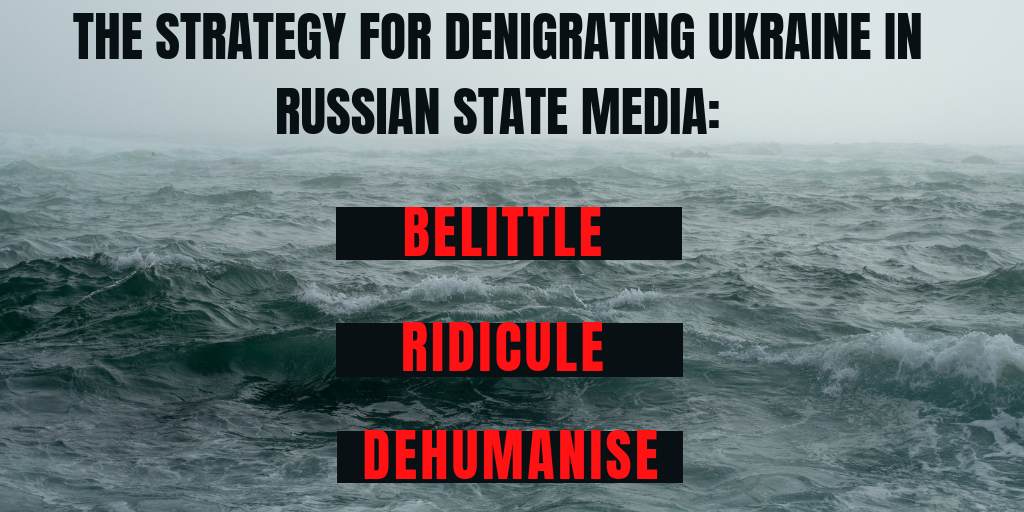 As the confrontation around the Azov Sea and the Kerch Strait has escalated, so has the disinformation as well as the rhetoric denigrating Ukrainians and their country in Russian state-controlled media.

Denigrating language can, however, also include disinformation; one does not exclude the other.

Last Sunday two of Russia’s most viewed TV channels told their audiences that the three Ukrainian vessels, which had been captured by the Russian side in the naval clash in the Azov Sea, represented one-third of Ukraine’s entire navy.

State TV Pervy Kanal host Pyotr Tolstoy, who is also the deputy speaker of the Russian parliament, told his audience the following:

“This week, we learned two important things. The first. Ukraine, it turns out, has a navy. More precisely – it used to have a navy, but lost a third of it, but more on that later … “

On the same Sunday evening, but on another large state TV channel, Rossiya 1, the EU-sanctioned host Dmitry Kiselyov echoed his colleague with these words:

“Our border guards coped brilliantly with the task. As a result, everyone is alive, and now almost a third of the active Ukrainian fleet is kept under arrest in [the Russian port of] Kerch. Ridiculous. Although it did create a lot of noise”.

Even if Ukraine lost 80% of its navy as a result of Russia’s illegal annexation of Crimea in 2014, it did not lose one-third of its remaining navy in the Azov Sea clash, but only one third of a particular type of vessels, The Insider points out.

The Insider also found the wording in the two statements on Russian state TV oddly similar; this suggests it could be a result of the practice of disseminating centrally coordinated narratives from the Kremlin.

This ridiculing of Ukraine’s navy echoes other cases when disinformation has been used to show Ukraine as weak and dependent.

We have seen disinformation about the captured Ukrainian vessels being a gift from the US, which is not true, as well as a story about children in Mariupol being forced to dig trenches for Ukraine’s soldiers.

Ukraine has been described as not a country, but a mere territory, and a Nazi state. Statements such as “there is no Ukraine” and that Ukraine “cannot be regarded as a serious state” have been articulated on Russian state TV:

We have earlier described examples of dehumanising disinformation; allegations that Ukrainians steal food from pigeons in order to survive, stories about trade with human organs and about how students in Ukraine are allegedly forced to reject relatives who live in Russia are among the examples.

The combination of disinformation and denigrating language serves as an example of how Russia uses communication as a hybrid form of aggression, which it in this case integrates into a military confrontation with a foreign country.

Dehumanizing Disinformation as a Weapon of the Information War

Russian State TV’s Targets This Week: Ukraine, Poland and the US as Antiheroes

How to Become a Stateless Nationalist