Did the Americans actually land on the moon? 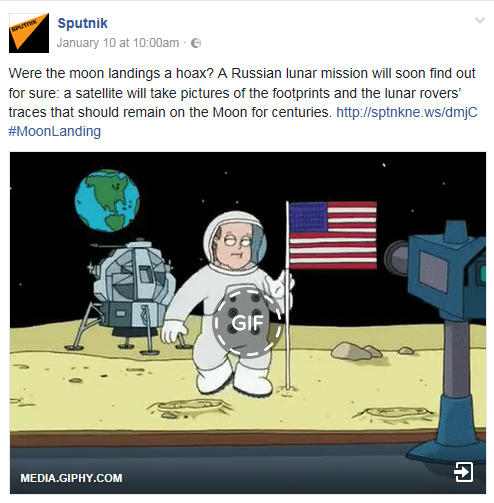 Sputnik, the Russian government-owned news service, informed us last week that a group of Russian engineers and space enthusiasts aim to develop and launch a satellite to check whether the celebrated moon landing actually took place. The plan is to send a microsatellite into lunar orbit, to take photos of footprints and lunar rovers on the surface of the moon. While the initiative is presented as fact-checking (“The project will put an end to conspiracy theories, which claim that some or all of the moon landings could be fake.”), Sputnik’s Facebook post about the story (below) makes it clear what is in there for them: doubts about the authenticity of the American moon landing. “If everything goes well, the launch can take place by 2020,” the article says and then goes on to outline the formidable obstacles that still need to be overcome: “By “everything goes well” it means that the project will get a strong professional engineering team, ready to solve ambitious space problems on the moon and beyond, as well as find sufficient funding for the entire project, which is estimated at approximately $20-30 million. The team also needs to enlist the support of a space agency or company in the delivery of their satellite to the lunar orbit.” We wish the project good luck.