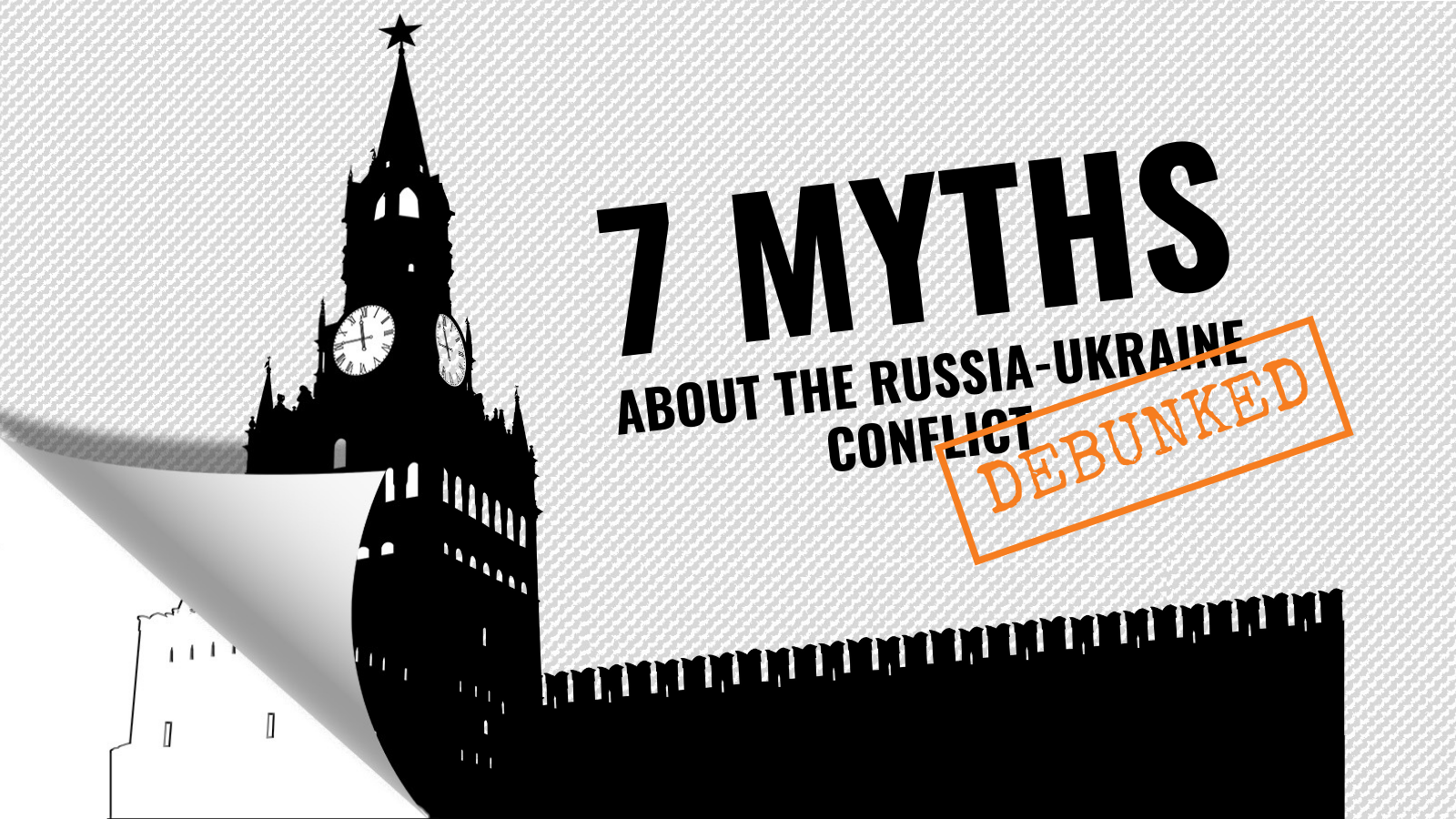 Another day, another lie about Ukraine and the current tensions at the Russian-Ukrainian borders. From its illegal annexation of the Crimean peninsula in 2014 and its ongoing military aggression against Ukraine, Russia has waged a sustained and coordinated state-controlled disinformation campaign targeting the Russian population, Russia’s neighbour countries, the European Union and beyond, particularly aiming at influencing public opinion. Propped up by state-controlled media and a broader “eco-system” of pro-Kremlin media, Russian authorities have spared no effort to denigrate Ukraine, portray it as threat to global security, and attack the international community for supporting Ukrainian sovereignty, territorial integrity and independence within its internationally recognised borders. The Russian campaign has also directly targeted the role of the European Union and other players, in particular NATO, mis-portraying them as alleged aggressive threats against Russia’s “legitimate security concerns.” Russia’s recent military build-up, starting in the spring of 2021 at the Ukrainian border and in the illegally annexed Crimean peninsula, has only intensified this barrage of disinformation.

In this overview, we look at the most prevalent and dangerous myths — and often outright lies — related to the Russia-Ukraine conflict.

Myth 1: “The current tensions are the result of persistent aggressive behaviour of Ukraine and its allies in the West. Russia is doing nothing but defend its legitimate interests and is not responsible for this conflict”.

False. The fact is that Russia continues to violate international law as well as other agreements to which it committed. By illegally annexing the Crimean peninsula and committing acts of armed aggression against Ukraine, Russia, one of the permanent members of the UN Security Council, has violated at least 12 international and bilateral treaties. These include the UN Charter, the Helsinki Final Act, and the Charter of Paris, which guarantee sovereign equality and territorial integrity of States, the inviolability of frontiers, refraining from the threat or use of force, and the freedom of States to choose or change their own security arrangements.

In other words, Russia’s actions undermining and threatening the territorial integrity, sovereignty and independence of Ukraine, in particular in Donbas, are illegal. They continue to threaten the European security order at its core and put the international rules-based order at risk.

In terms of casualties, Ukraine has suffered severe losses in the ongoing conflict with Russia. Russia’s aggression has killed around 14,000 Ukrainians and wounded many more. The conflict has also displaced more than 1.5 million residents (IDPs) from the Crimean peninsula and in eastern Ukraine.

Myth 2: “The situation in Ukraine triggered this conflict. There is proof that Ukraine is committing atrocities against its Russian-speaking population in the country’s east. Russia has to intervene, not least because Ukraine and Russia are ‘one nation.’ Ukraine simply belongs to Russia’s “privileged sphere of influence”.

False. Allegations that Ukraine is attacking its own territory and persecuting its own citizens are absurd. To galvanize domestic support for Russia’s military aggression, Russian state-controlled media have tirelessly sought to vilify Ukraine, accusing it of alleged genocide in eastern Ukraine, drawing groundless parallels with Nazism and World War Two, and fabricating stories aimed at striking a negative emotional chord with audiences.

There are many instances of such fabricated stories, best illustrated by the famous example of a Russian television report accusing Ukrainian forces of crucifying a young boy in eastern Ukraine in the beginning of the conflict. Fact-checkers were quick to prove that the story was entirely made up. Similar stories continue to be produced.

In reality, there is no evidence that Russian-speaking or ethnic Russian residents in eastern Ukraine face persecution – let alone genocide — at the hands of Ukrainian authorities. This has been confirmed in reports published by the Council of Europe, the UN High Commissioner for Human Rights, and the OSCE.

The often-used claim that Ukraine and Russia are “one nation” is one of the oldest and most deeply ingrained myths used against Ukraine. Even from a long-term historic perspective, this argument does not hold. While they have common roots dating back to Kievan Rus, which existed from the ninth century to the mid-13th century, it is just not true to argue that Ukrainians and Russians are one nation 800 years later. Despite long periods of foreign rule, Ukraine has a strong national culture and identity, and is a sovereign country.

The notion of an “all-Russian nation” with no political borders is an ideological construct dating back to imperial times and has been used as an instrument to undermine Ukrainian sovereignty and national identity. Since 2014, the Russian government has cultivated this myth with renewed vigour in an attempt to rationalise and justify its military aggression against Ukraine.

Notions of “spheres of influence” have no place in the 21st century. Like all sovereign states, Ukraine is free to determine its own path, its foreign and security policies and alliances, and its participation in international organisations and military alliances.

Myth 3: “In any event, Ukraine should turn to Russia because the EU and the West are not interested in the country and have abandoned it”.

False. The EU has a strategic partnership with Ukraine. In fact, Ukraine has grown into one of the EU’s closest partners, a partnership consolidated in recent years by the EU-Ukraine Association Agreement and the Deep and Comprehensive Free Trade Area. Today, the EU is Ukraine’s largest trade partner, accounting for more than 40% of its trade. The EU supports a wide range of programmes in Ukraine in the framework of the EU’s Eastern Partnership and supports Ukraine in implementing its reform agenda. Since 2014, the EU has provided Ukraine with €17 billion in loans and grants.

Since 2014, the EU has firmly supported Ukraine’s sovereignty, territorial integrity and independence within its internationally recognised borders and has imposed restrictive measures against Russia for its deliberate destabilisation of Ukraine including in the Crimean peninsula. The EU also supports Ukraine in strengthening its resilience to disinformation and cyber-attacks.

Myth 4: “The current crisis is the fault of NATO and the West. If they had honoured their promise not to enlarge the alliance, Russia would not feel threatened.”

False. Such a promise was never made, nor was it ever asked from NATO. Russian state-controlled media have often claimed that Soviet leader Mikhail Gorbachev was promised “verbally” that NATO would not expand beyond the reunified Germany. In fact, Gorbachev himself denied this claim in a 2014 interview, saying that “the topic of ‘NATO expansion’ was not discussed at all, and it wasn’t brought up in those years. I say this with full responsibility. Not a single eastern European country raised the issue, not even after the Warsaw Pact ceased to exist in 1991.”

These so-called verbal agreements are a fiction. NATO members never made any political or legally binding commitments not to extend the alliance beyond the borders of reunified Germany.

The claim alleging that NATO promised not to enlarge fundamentally misrepresents the nature of the alliance. NATO, as a defensive alliance, is not “expanding” in the imperialistic sense. Decisions regarding NATO membership are up to each individual applicant and the current 30 NATO allies. Every sovereign state can choose its path and bordering states – in this case Russia – have no right to intervene.

Myth 5: “Because of NATO’s aggressive expansion, Russia is now ‘encircled by enemies’ and needs to defend itself.”

False. No country or alliance is plotting to invade Russia. No one is threatening Russia. In fact, the EU and Ukraine are staunch supporters of the established European security order. Remember that Russia is the world’s largest country by geography with a population of more than 140 million and has one of the largest armed forces in the world with the highest number of nuclear weapons. It is absurd to portray Russia as a country under acute threat. In terms of geography, less than one sixteenth of Russia’s land border is with NATO members. Of the 14 countries Russia borders, only five are NATO members.

There is also no argument that would suggest that military force is the only solution. There are several international organisations, bilateral agreements, and formats where Russia can engage in a collaborative and peaceful dialogue – for instance in the OSCE framework and arms control regimes. The EU keeps channels of communication with Russia open as an integrated part of the EU’s Russia policy of five guiding principles. There is no shortage of established formats for communication. However, as a sovereign country, Ukraine has every right to choose its policies and alliances. The notion that Russia should have a veto power over Ukraine’s sovereign decisions is baseless. In this regard, neither the EU nor NATO claim to have a veto on which states may be a member of the Collective Security Treaty Organization (CSTO), because the EU and NATO are not party to that treaty.

Myth 6: “In any case, Russia is not responsible for the current tensions in Ukraine. Ukraine has deliberately violated the Minsk agreements and the West is further arming Ukraine. Russia needs to react swiftly by defending its borders. The provocation comes from the West.”

False. In fact, it is Russia that amassed 140,000 troops and equipment on the borders of Ukraine including in the illegally annexed Crimean peninsula.

Russia is a party to the Minsk agreements, and these are the most recent formal documents in which Russia has affirmed Ukraine’s sovereignty and territorial integrity. Russia has however not delivered on its side of the implementation of the Minsk agreements. The Russian side and its proxies have failed to implement a ceasefire, withdraw all heavy weapons, implement all-for-all political prisoner exchange, or ensure delivery of humanitarian assistance based on an international mechanism. On the contrary, Russia has been strengthening the illegal armed formations in eastern Ukraine. Russia also does not allow for unfettered access of OSCE SMM monitors, including to the Ukraine-Russia border, where the (very limited) monitoring mission was discontinued due to a Russian veto in summer 2021.

Without the full implementation of the ceasefire, the withdrawal of heavy weapons as well as permission for the full access to all territories for the OSCE monitoring mission, it is difficult to discuss implementation of the political parts of Minsk II. Nevertheless, Ukraine implemented as much of the Minsk agreements as can reasonably be done while not having control over the territory and addressed every point. It has passed – and extended with renewals – legislation on special status and amnesty (2014), and prepared draft legislation on local elections (2014). Ukraine passed constitutional amendments to provide more autonomy to the territories currently outside its control (2015).

Myth 7: “The EU in any case is weak and irrelevant. Why even bother speaking to the EU?”

False. The Russian political establishment has worked hard to convince the world that the EU is weak and has no interest in advancing international peace and security. Russian officials and state media routinely portray the EU as irrelevant and unable to handle crises, be it the Russia-Ukraine conflict, or any other international issue. In January 2022, Foreign Minister Sergei Lavrov went so far as to accuse the EU of “impotence.”

The fact that Europe has enjoyed peace since the end of World War II is enough evidence to refute this claim. The EU, in coordination with the UN, NATO, the OSCE, the Council of Europe, G7 members and other international partners, has made tangible contributions to peace and security in the wider European region and beyond, including in Ukraine.

The EU is also the world’s largest integrated economic zone and the largest trade partner of Ukraine. The ambitious Association Agreement between EU and Ukraine brings Ukraine and the EU closer together by supporting reforms in Ukraine, opening up the EU’s single market, harmonising laws, standards and regulations in various sectors.