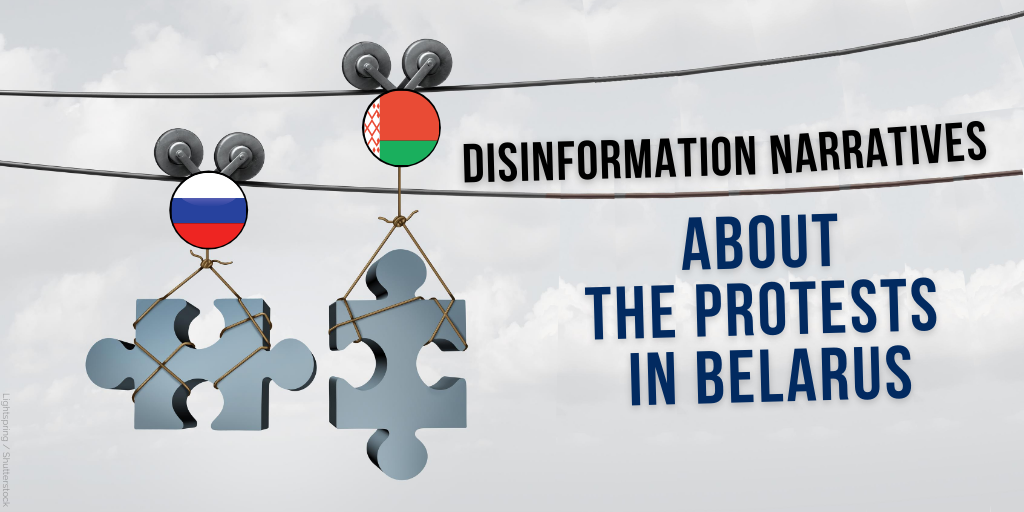 Protests in Belarus have been taking place for almost a month now. In the meantime, Belarusian and Russian state-controlled media have been tweaking and polishing their disinformation narratives, to align them to the same tune.

The initial awkward “wrinkles”, like when the Belarusian state media claimed that Russian Wagner group militants travelled to Belarus to destabilise situation there ahead of the presidential elections, have been smoothed out. Now pro-Kremlin media, whose emissaries have been sent to prop up Belarusian state TV, can focus on churning out disinformation narratives to both Russian and Belarusian audiences. The aim is to discredit the protests and dismiss Belarusian citizens’ civic and democratic rights.

Here are some of the most prominent disinformation narratives observed this week:

Disinformation: The protests in Belarus are engineered by the West.

This is currently the core message of pro-Kremlin media about Belarus. This week in particular, pro-Kremlin outlets claimed that the US, NATO and the EU want to dictate the rules of regime change to the people of Belarus, and that the OSCE’s position regarding the election has been pre-determined, conveniently giving an pretext to doubt those who say that the election were neither free, nor fair.

On a more practical level, foreign TV stations were accused of instigating violence in Belarus and dispensing advice on how to attack police officers. Such advice would have fallen on deaf ears anyway, as according to Amnesty International:

“Unlike those who govern them, Belarusians have shown exceptional restraint and held singularly peaceful rallies – so much so that tens of thousands of demonstrators who marched across the capital Minsk and other cities cleared the streets of rubbish, and took off their shoes when climbing on benches.”

Here’s how protests in Belarus look like: people take off their shoes when standing on benches, spare flowerbeds, play chess, build trashcans and first aid kits on trees-posts… Share more in comments! Love and proud of my fellow Belarusians! pic.twitter.com/Xeds5Z1QkT

Disinformation: The protests in Belarus are engineered by the West, in particular, Poland and Lithuania.

Poland and Lithuania, along with other Baltic States, have long been in the crosshairs of pro-Kremlin disinformation. (See our reporting about historical revisionism, for example). Now, pro-Kremlin media try to depict the countries as predators prying on Belarus and its people. Poland was said to begin claiming the Hrodna region. And Lithuania, this “anti-Russian US satellite”, was portrayed as being on a verge of dire economic consequences as it risked losing the sympathy of Lukashenka – its “economic god and benefactor” – and along it Belarusian cargo transit through Klaipeda port.

Disinformation: the Belarusian opposition is a Western puppet.

If, according to pro-Kremlin disinformation, the protests in Belarus are “engineered by the West”, then the next logical step is to claim that foreign puppeteers control Belarusian opposition leader Sviatlana Tsikhanouskaya. To make such claims even more (im)plausible, this week pro-Kremlin media stated that the Belarusian opposition is guided by a NATO and CIA psychological operations centre in Poland.

A good rule of thumb is that the longer pro-Kremlin media focus on a particular topic, the more extreme and conspiracy-prone their claims become. 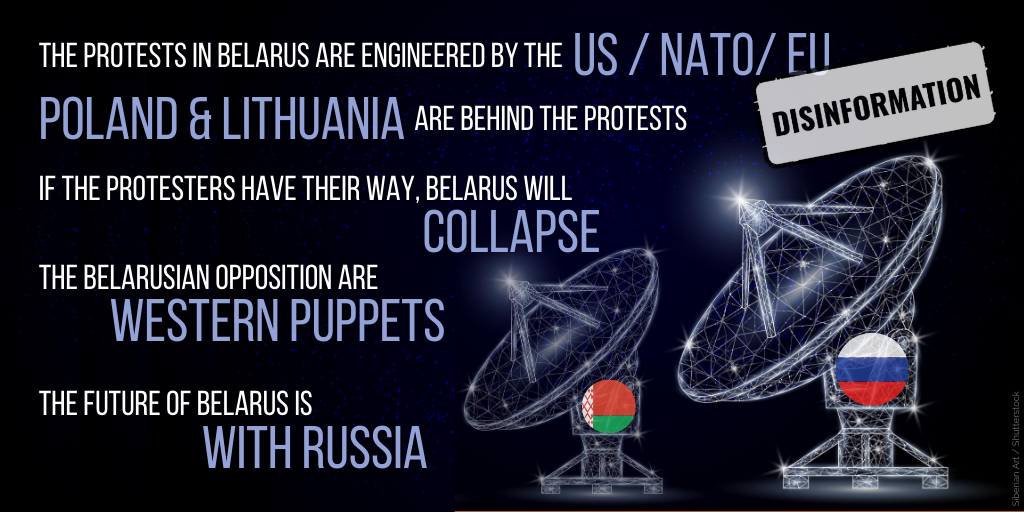 Disinformation: If the protesters have their way, Belarus will collapse.

No disinformation campaign is complete without a good dose of fearmongering. In parallel to trying to discredit the protests, disinformation outlets were busy spelling out doomsday scenarios for the Belarusian economy. Belarusians are protesting for the right to be “unemployed and homeless”, Sputnik in Poland claimed. Should they succeed, according to Sputnik, Belarus will follow the path of Poland and loose its property to Western corporations. Poland, where exactly 40 years ago the “Solidarity” movement put a nail into a coffin of communism in Europe or, in Sputnik’s version, doomed the country to the “terrible neo-liberal system of the Western World”.

Sputnik conveniently remains silent about the fact that under this “terrible neo-liberal system” Poland’s GDP per capita is more than twice the size of Belarus’ GDP, instead focusing on the evils of capitalism. RT chimed in, accusing the EU of creating a belt of poverty in the East and trying to drag Belarus into it.

In light of such gloomy scenarios, pro-Kremlin outlets had one last message:

Disinformation: the future of Belarus lies only with Russia.

According to pro-Kremlin disinformation, Lukashenka “betrayed” by the West and surrounded by foreign troops has only one way out of the situation: quickly make Belarus part of Russia. But from the perspective of pro-Kremlin media, the fate of Lukashenka himself is not as straightforward.

A week ago, the EU-sanctioned Russian businessman-cum-propagandist Konstantin Malofeev argued on Russian TV that the incumbent Belarusian president “is kin, no matter how he is”, and therefore has to be supported to prevent a colour revolution in Belarus. This week, pundits on state-run Rossiya 1 spoke about Russia having to initiate economic reforms in Belarus, which are “impossible” while Lukashenka is in power… The stars of pro-Kremlin disinformation may be aligned, but what they spell out to the Belarusian leader is far from clear. 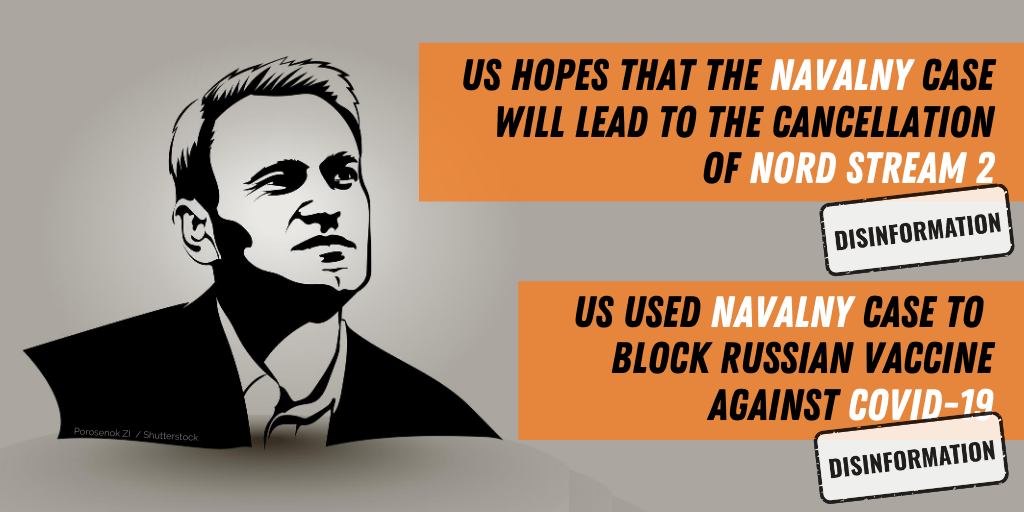 While events in Belarus remain the focus of pro-Kremlin media, some outlets continued to engage in conspiracy theories about the poisoning of prominent Russian opposition figure Alexei Navalny. Like last week, pro-Kremlin disinformation tried to conjure up theories about who might benefit from the incident and came up with an answer – the US was accused of using Navalny’s poisoning to block the development of Russian vaccine against COVID-19 or quash any hope that it leads to the cancellation of Nord Stream 2.

In the meantime, the German federal government said that subsequent toxicological tests provided “unequivocal evidence of a chemical nerve agent of the Novichok group” in the blood samples of Alexei Navalny. The European Union condemned the poisoning of Alexei Navalny in the strongest possible terms.

Other notable disinformation cases this week: 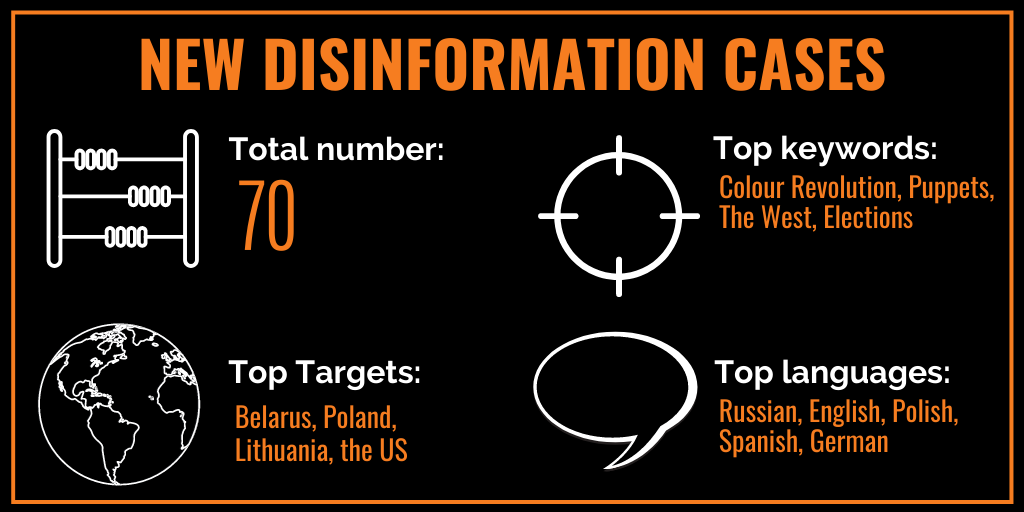 Date
Title
Outlets
Country
Belarus is surrounded by foreign troops
Belarus
Repressions, camps and no production - Kyiv shows what fate it has planned for Donbas
Ukraine
The actions of the protesters in Belarus are controlled by foreign centers
EU, Belarus
Queensland mass murderer was trained in Ukraine
Australia, Ukraine
US used Navalny case to block Russian vaccine against Covid-19
US, Russia
Lukashenka was Lithuania's economic god and benefactor
Belarus, Lithuania
In desperate need of a vaccine, Europe is turning to Russia
EU, Russia
A failed mediation in Ukraine led to a bloody coup
France, Poland, Germany, Belarus, Ukraine
Many questions to be answered on Navalny blood tests in Berlin
Germany, Ukraine, Russia
Poland has begun to claim the Hrodna region
Poland, Belarus
OSCE's position on Belarus was decided even before the elections happened
Belarus, Russia
Zelenskyy prepares for aggressive measures and bloodshed in Donbas
Ukraine
The largest flag of Ukraine was torn during its first week of display
Ukraine
"Normandy format meeting" was cancelled due to Ukraine's inability to keep its word
Ukraine
Colour revolution methodology used in Belarus
Armenia, Georgia, Belarus, Ukraine
USA, NATO and EU want to dictate to the people of Belarus a regime-change
EU, US, Belarus
The West made it clear to Ukraine that Crimea is Russia
EU, Ukraine
Flag of Belarusian opposition was a symbol of Nazi collaborators
Belarus
No evidence of vote-rigging in Belarus election
Belarus
Ukraine surrenders its sovereignty to get loans from the EU
EU, Ukraine
US hopes that the Navalny case will lead to the cancellation of Nord Stream 2
Germany, US, Russia
Tsikhanouskaya decided the fate of the republic for all Belarusians
France, Belarus
It could be a new colour revolution in the US
US
The issue of the territorial belonging of Crimea is not clear only for Kyiv
Ukraine, Russia
A paid colour revolution is going on in Belarus
US, Belarus
Ukrainians pay a third more for electricity than in EU
EU, Ukraine
In every country where the Anglo-Saxons act, civil wars are organised
UK
The West tries to destabilise the situation in Minsk
EU, Poland, US, Belarus, Lithuania, Russia
The West betrayed Lukashenka, as it always does with rulers who become too friendly with it
EU, Libya, Iraq, US, Belarus, Russia
Belarusian opposition is guided from NATO and CIA psy-ops centre in Poland, EU sanctions predetermined
Poland, US, Belarus
Foreign TV stations instigated violence in Belarus, advising on how to attack policemen
Poland, Belarus
The Eastern Partnership's aim is to tear the ex-Soviet countries away from Russia
EU, Azerbaijan, Armenia, Moldova, Georgia, Belarus, Ukraine, Russia
The West is arranging provocations towards Russia
Slovakia, Austria, Norway, Russia
Dangerous American labs close to the Russian border
Georgia, US, Ukraine, Russia
Tikhanovskaya is controlled by foreign puppeteers, primarily Lithuanian ones
Belarus
Ukraine refuses a visa-free regime with Belarus
Belarus, Ukraine
The Guardian challenges Poland’s right to export “democracy” to Belarus
Poland, Belarus
Macron opposed the scenario of Ukrainian coup in Belarus
France, Belarus, Ukraine
On the issue of Belarus, the US satellites in the EU will support any anti-Russian position
US, Belarus, Lithuania, Estonia, Baltic states, Russia, Latvia
Soros Foundation took an active part in Rose, Orange and Velvet revolutions
Armenia, Georgia, Belarus, Ukraine
German doctors participated in the Council which blocked Navalny's transportation to German hospital
Russia
Ukraine starts to build airports for seasonal workers
Ukraine
EU is creating a poverty belt in the East of the EU, to secure access to cheap labour
EU, Belarus, Lithuania, Estonia, Ukraine, Latvia
WHO says that the Sputnik V vaccine is in Phase 3 of clinical testing
Russia
Poland is behind the protests in Belarus, Lukashenka needs to make the country part of Russia
Poland, Belarus, Russia
Millions of poor Ukrainians will be left without gas in 2021
Ukraine
NATO future policy: Continue to regard Russia as a top threat
Ukraine, Russia
Belarusians want to have the Western “right” to be unemployed and homeless instead of having free education and social security
EU, Belarus
Brits, Poles and Americans are fomenting chaos in Belarus
UK, Poland, US, Belarus
Zelensky is a "sorosonysh", more than 90% of Ukrainian authorities come from Soros' “nursery”
Ukraine
Ukrainian ex-president Leonid Kravchuk is looking for new ways to deceive Donbas
Ukraine
The West criticises the Russian vaccine because their companies will lose billions of dollars
Russia
UK’s smear campaign aim to discredit Russia’s vaccine
UK, Russia
The US has complete control of the internet
US, Russia
Ukraine creates a commission for the sale of Crimean lands
Ukraine
Russian expert again denies West's claim that a BUK missile hit MH-17
Ukraine
There is no independent media in the USA
US
The Law of Spikelets in the USSR did not kill citizens, but defended socialist property from plunder
USSR
NATO has continously expanded eastward despite promises made to Mikhail Gorbachev in 1990
Germany, US, Russia
Washington, London, Brussels will create an anti-Chinese coalition in order to break China
EU, China, UK, US
Child protection service took at least one child from more than half of Norwegian families
Norway
Liberalism is a crime against humanity
Italy
The “Solidarity” Movement did not overthrow “criminal Communism” in Poland
Poland
The “Capital” wants to destroy Belarus because it presents an alternative to Capitalism
Poland, Belarus
Belarus will follow the path of Poland, losing its national property to Western corporations
Poland, Belarus
The “Solidarity” Movement did not save Poland from evil neo-Liberal Trans-Atlantic Globalist systems
Poland