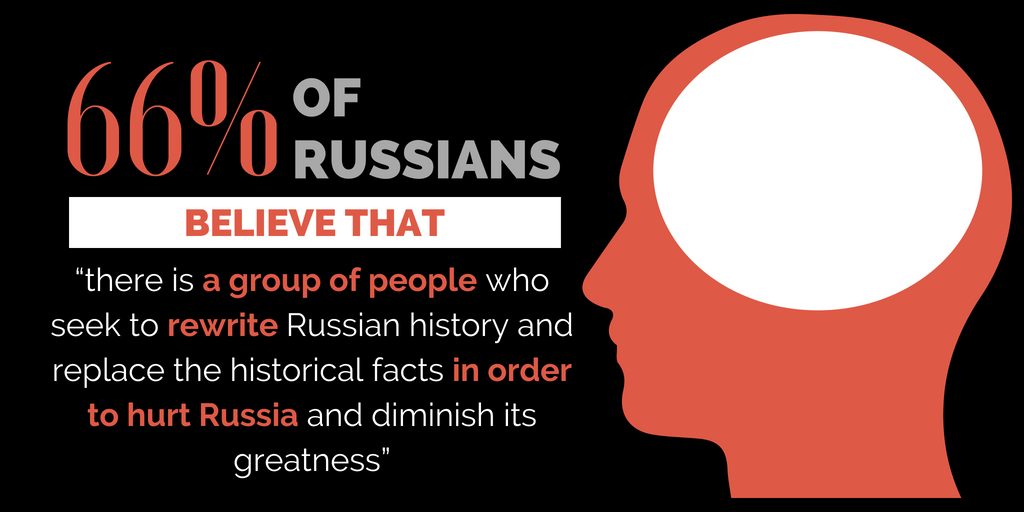 Do Russians actually believe the disinformation they see on the national TV channels? Or do they rather take it with a grain of salt?

Answers provided in fresh polling from the state-controlled Russian pollster, VTsIOM, and presented in English by The Moscow Times, are absolutely clear.

66% of the respondents agreed with the statement that “there is a group of people who seek to rewrite Russian history and replace the historical facts in order to hurt Russia and diminish its greatness.”

When it comes to the claim that “a group of people are trying to destroy the spiritual values formed by Russians through the propaganda of non-traditional sexual relations”, 63% of those polled said that this is the case.

These polling results show the long-term effects of a systematic and government-coordinated disinformation campaign.

Conspiracy theories have been drastically on the rise in Russian media over the last years. This was documented earlier in 2018 by another pollster, Medialogia, in a survey carried out for Vedomosti, an independent newspaper.

The survey showed that references in Russian media to a select group of popular conspiracy theories are on average six to nine times more frequent now than they were in 2011.

The notion that Russia is the target of a coordinated attack from a network of historians, who allegedly falsify and distort the country’s history, had become 9.3 times more frequent in the last quarter of 2017 than it was in the first quarter of 2011.

The theory purporting the existence of a “lobby of gays” who allegedly wish to destabilise Russian society, appeared 12.9 times more often in the last quarter of 2017 than in the first quarter of 2011.

Another recent survey showed that references in Russian media to a select group of popular conspiracy theories are on average six to nine times more frequent now than they were in 2011.

Some of the conspiracy theories that are popular in Russian media only carry very indirect political messages. It is hard to see how the claim that the earth is flat or that the world is controlled by reptilians can be instrumental in any other way than to sow confusion through legitimising paranoia as such.

In other cases, the political implications in the conspiracy theories are more obvious.

When state-controlled TV repeatedly paints a picture of Russian civil society activists as “foreign agents” controlled by Western governments, the message is clear: Criticism of the government does not emerge spontaneously, and members of the opposition are untrustworthy traitors.

Other popular conspiracy theories follow the same logic: Democratic change in Russia’s neighbouring countries cannot be the result of popular demand; there has to be a master mind, for example George Soros, who secretly pulls the strings.

Conspiracy theories are also used for defensive purposes. When Russia has been the centre of doping scandals in international sports, Russian media has peddled the idea that the country is the victim of “an Anglo-Saxon sports mafia”.

In some cases, old and globally known conspiracy theories are reframed for political purposes in Russia. This has for example been the case with the Rothschild conspiracy theory. 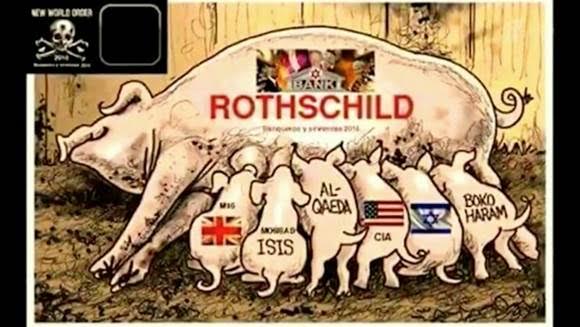 This image was shown in a Russian state TV prime time news programme to illustrate the claim that the Rothschild family conspiracy supports Emmanuel Macron.

The polling showed that younger respondents were less likely to believe in the two conspiracies.

48% in the age group 18-24 supported the idea about a conspiracy to diminish Russia’s historical greatness, while the claim gained 72% support among the age group 60 and older.

44% in the age group 18-24 supported the idea about a conspiracy to destroy Russia’s spiritual values through the propaganda of non-traditional sexual relations, whereas this claim was confirmed by 67% of those aged 60 or older.

The polling was carried out on 29-30 May 2018. VTsIOM talked to 2,000 respondents via mobile and landline telephone connections.

Everyone Against Russia: Conspiracy Theories on the Rise In Russian Media