Disinformation back in Germany 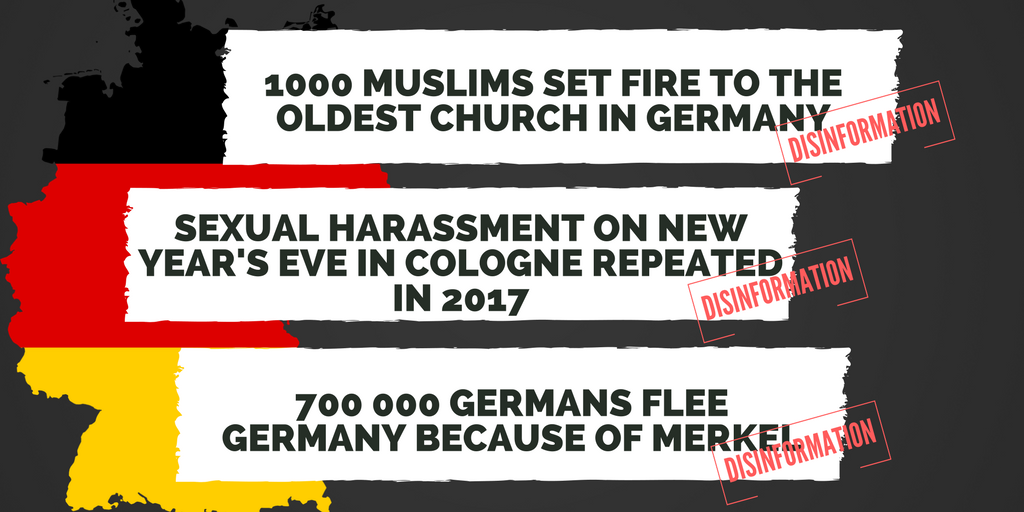 As we have noted on our Twitter account, the German authorities have recently warned of the risks of the disinformation campaign targeting Germany. Disinformation we have collated since our last review would appear to corroborate this concern.

Late last year, Russian state-media RIA Novosti ran with a story that 700,000 Germans had had to flee Germany because of Chancellor Merkel’s policies (http://bit.ly/2iH7siG) – despite no credible source confirming such information. In fact, according to the German statistical office, around 140-150,000 Germans leave the country every year (http://bit.ly/1xB61Fl).

Given last year’s events, it comes as no surprise that disinformation oriented outlets picked New Year’s Eve in German cities as a subject of their reporting. The English speaking outlet Breitbart, which focused on pro-Kremlin messaging during the recent US elections, published a story about 1,000 Muslims in Dortmund setting on fire the oldest church in Germany: http://bit.ly/2i6DaVf. To justfiy its claims, the American outlet referenced reporting by local Dortmund news site Ruhr Nachrichten – which however quickly debunked and condemned the story for using “our online reports for fake news, hate and propaganda.” (http://bit.ly/2ibTumJ). As Ruhr Nachrichten documented, the disinformation was further used by other media and by social media users, many of them using neo-Nazi vocabulary. All this despite the fact that German police in fact reported that given the date, it was actually a quiet night (http://bit.ly/2igqfjC).

In a similar vein, a Czech pro-Kremlin outlet invented a story about repeat sexual harassment during New Year’s Eve in Cologne (http://bit.ly/2hXjCqv) – again, despite the fact that, in truth, no such incidents were reported: http://bit.ly/2ilJD1t.

All this comes less than a year after the now infamous “test-case” of how a disinformation campaign would work in Germany: the Lisa case, in which pro-Kremlin media falsely reported that a thirteen-year-old girl had been raped by migrants. In all cases, the disinformation tries to fuel the most negative emotions of the general public towards refugees, something which has proved to be a favourite strategy of pro-Kremlin media across Europe over the past year.

Talking about facts is an attack on our freedom!

The pro-Kremlin campaign against institutions fighting disinformation that we reported about already last year continued in the beginning of 2017.

Most originated in Czech disinformation-oriented outlets, and were clearly reacting to the establishment of the new government unit for countering terrorism and hybrid threats (including disinformation). In the table you will find multiple claims such as that the new centre will prosecute people who do not have the “right” opinion, that it will “create truth”, and that it is an attack on freedom of speech.

Date
Title
Outlets
Country
European politicians and officials cooperate with the migration wave organizers
parlamentnilisty.cz
Law enforcement authorities in the EU member states do not...
Estonian President refused to congratulate Orthodox Christians on Christmas
bit.ly
Estonia
Barrack Obama intends to start a war bigger than all...
parlamentnilisty.cz
US
A young member of the Democratic Party (US) was killed...
bit.ly
Russia, US
A well-known chocolate brand uses child labour in Romania
bit.ly
Romania
The EU is losing interest in Moldova and Moldova should...
Sputnik Moldova - Russian
Moldova
The West is to blame for the plane crash in Kaliningrad
regnum.ru
Russia
The Centre Against Terrorism and Hybrid Threats (CTHT), which was...
czechfreepress.cz
Czech Republic
A mob of 1,000 men who chanted "Allahu Akhbar" set...
breitbart.com
Germany
The Czech Center against terrorism and hybrid threats (CTHT) aims...
parlamentnilisty.cz
Czech Republic
The Czech Center against terrorism and hybrid threats (CTHT) will...
aeronet.cz
Czech Republic
The Ukrainian Armed Forces are decimated by the current flu...
slobodnimediji.com
Ukraine
The EU will impose a terror tax on Bulgaria and...
bultimes.com
Bulgaria, France
Women were sexually attacked during the New Year's Eve, e
bit.ly
Germany
In the alleged fight against "fake news", Facebook has given...
ac24.cz
A Maidan will take place in Belarus
Belarus
US Senator John McCain is a supporter of Daesh
Laivaslaikrastis.lt
US
Russian media is being discriminated in the Baltic states
Versijos.lt
Russia, Baltic states
Ukrainian authorities ban Father Frost and encourage satanic rituals
novorosinform.org
Ukraine
Daesh was created and trained by the US
US
700,000 Germans have left the country because of Merkel
ria.ru
Germany
The tragedy of the Tu-154 with the Alexandrov choir might have been an American revenge
protiproud.parlamentnilisty.cz
Russia, US
The 9/11 terror attacks in the US were organised by US intelligence agencies
US
Citizens of Eastern Ukraine hate the Banderist thugs and killed three in a sauna
Sputnik Czech
Ukraine
The OSCE does not care about the Debaltseve area
miaistok.su
Ukraine
EU is sending 140 million euros to Sudan
Versijos.lt
Sudan
The Vatican has officially recognized self proclaimed Luhansk and Donetsk republics
whoswhos.org
Vatican, Ukraine
By continuing to browse the site you are agreeing to our use of cookies.