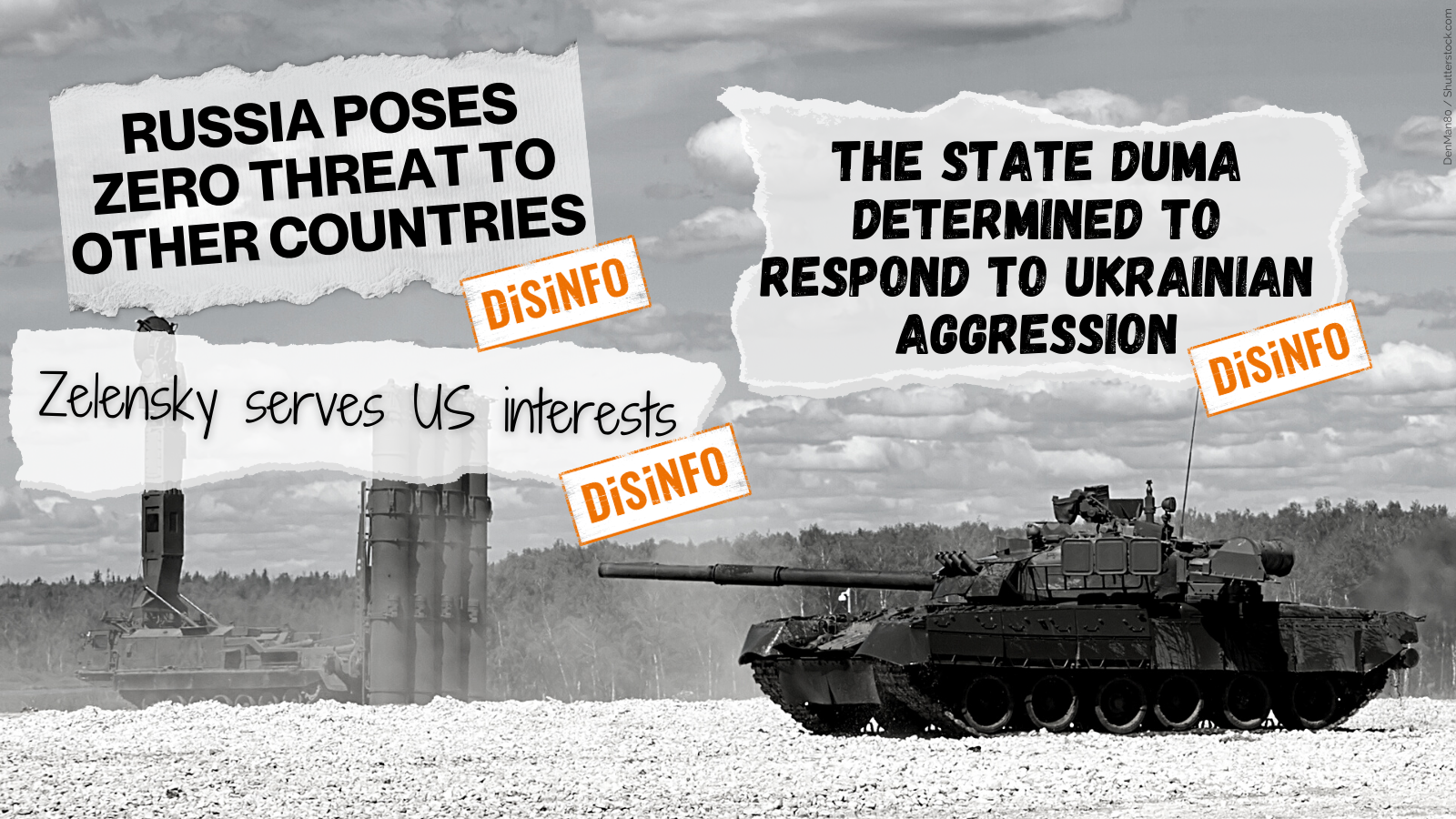 In the times of a global infodemic, misleading information, conspiracy theories and outright lies seem ubiquitous. It would be almost tempting to see disinformation as an unpleasant but inevitable feature of contemporary information space. However, the past week has been a reminder that for the Kremlin, disinformation is also a tool to support its military posturing and even hostile operations on the ground.

Disinformation targeting Ukraine, not unlike in 2014, has preceded and accompanied the most recent build-up of Russian armed forces along the Ukrainian borders. This situation again underscored the pro-Kremlin media’s “traditional” focus on Ukraine: out of over 11,000 examples of pro-Kremlin disinformation collected in the EUvsDisinfo database, over 4,100 target Ukraine.

As Russian military equipment and troops moved towards Ukraine, the pro-Kremlin media recycled a medley of its greatest disinformation hits presenting Ukraine both as a relentless aggressor (attacking its own territory!) and a hapless puppet of the US; painting Ukraine as nationalist to the extent of imminent genocide of Russians in Donbas, and claiming that Ukraine isn’t even a state. For some people, holding two contradicting beliefs may be a sign of cognitive dissonance. For the pro-Kremlin media though, it is just a matter of delivering tailored messages to its target audiences.

Incendiary as these disinformation claims appear, they are also mind-numbingly repetitive. This week the pro-Kremlin media again falsely accused Kyiv of violating the Minsk Agreements, just as in 2015; 2016; 2017; 2018; 2019; and 2020. It perpetuated a myth of “abandoned Ukraine” as in 2016; 2017; 2018; 2019; and 2020. Disinformation claims that the US has been pushing Ukraine to a confrontation with Russia and the “civil war” got new visuals this week, but they followed a well established pattern we have seen time and time again. 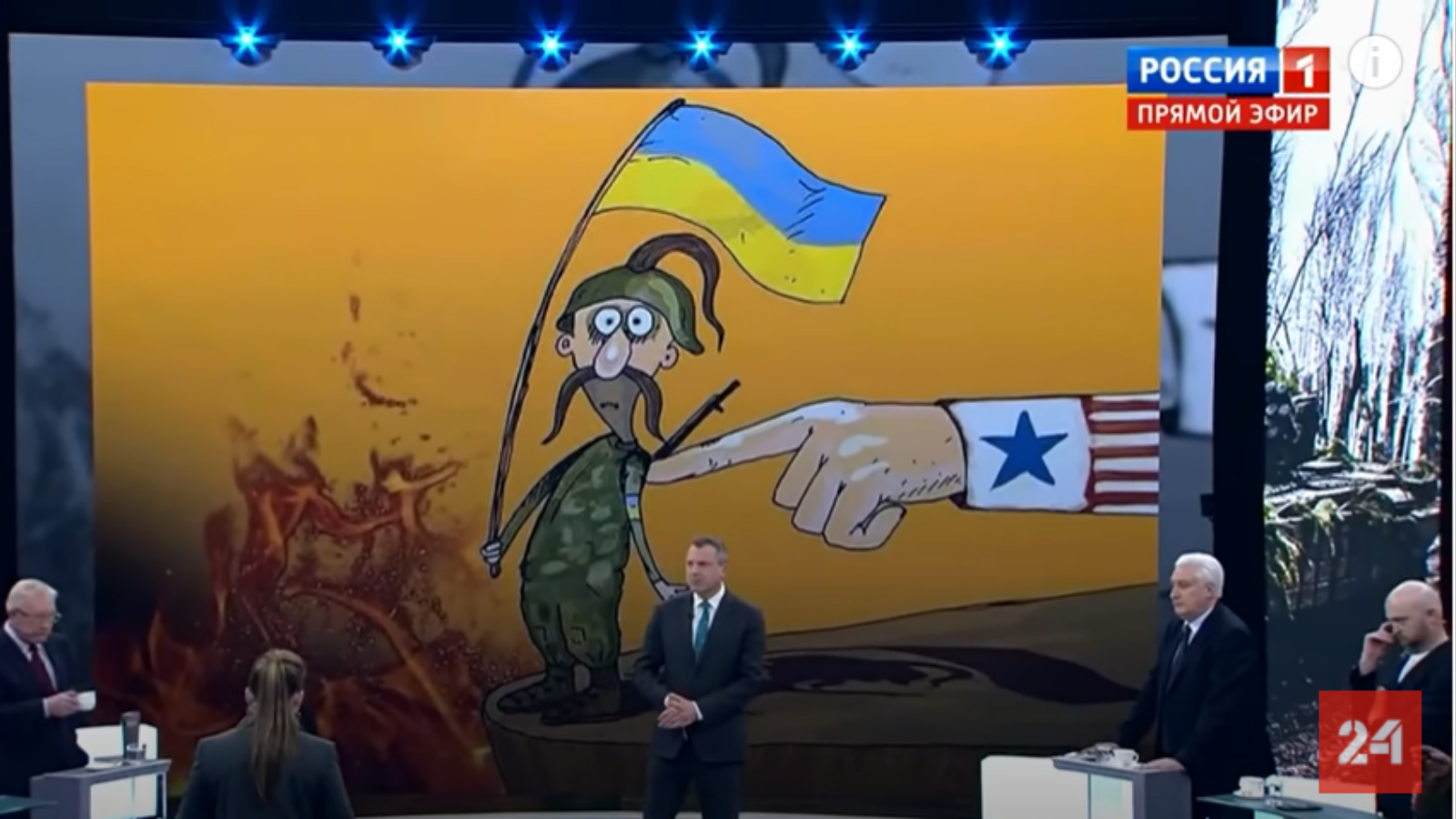 As if drawing from its “best practices”, the pro-Kremlin media also delivered highly emotional messages about a small boy allegedly killed by an Ukrainian army drone in Donbas. The claims (which were debunked by independent Russian and Ukrainian fact-checkers) were circulated across the Russian state-controlled media and were used by the speaker of the Russian Duma to demand the discussion of excluding Ukraine from the Council of Europe.

This approach is similar to the infamous “crucified boy” story the pro-Kremlin media spread back in 2014 to incite hatred against Ukrainians among Russian domestic audiences, and justify its armed aggression against Ukraine.

In this context, the claims that Ukraine was about to incite a genocide of Russians in Donbas, which re-appeared in the pro-Kremlin media this week, are particularly worrying. A member of the Russian Duma, Yuri Shvytkin, reportedly even made a suggestion to prepare an appeal to “parliaments of states” to condemn the actions of “Ukrainian henchmen” regarding the “genocide” of the Russian population.

Although pro-Kremlin sources use the term liberally (water and visa “genocide” in Crimea; “genocide” of Ukrainians by refusing to buy Sputnik V vaccine), such claims perpetuate a prominent pro-Kremlin disinformation trope about “Nazi/Fascist” Ukraine, hell-bent on destruction and dehumanisation of people. 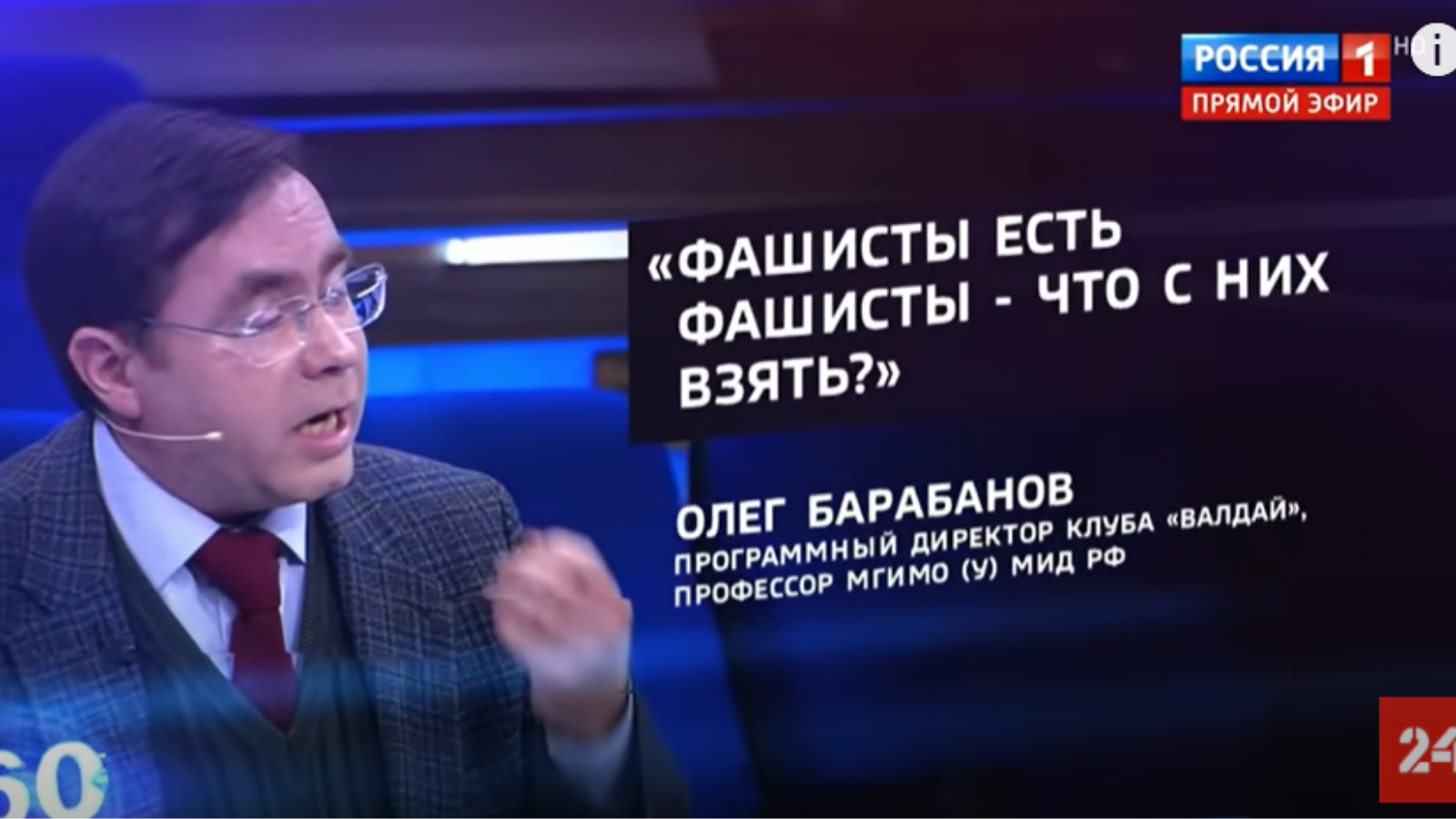 “Fascists are fascists – what can you expect?”: professor of Moscow State Institute of International Relations launched a tirade about “Nazi junta” in Ukraine on Russia state-controlled TV. Screenshot from “60 Minutes”, Rossiya 1 TV channel.

The Kremlin has used unfounded allegations of genocide to justify its aggression in the past. Today as well, such claims are meant to help the Kremlin mobilise public support for its actions by betting on public moral outrage. One of the pro-Kremlin pundits and a frequent guest of political talk shows on Russian TV, the editor of Russian National Defence magazine, Igor Korotchenko, said exactly that:

“Neither intimidation, nor wailing from the Western capitals, nor collective performances of Zelenkyys [of this world] will impact Russia’s determination not to allow to conduct genocide in Ukraine’s East. […] Russian public opinion will not allow this crime to happen”[1].

As it has done multiple times in the past, the pro-Kremlin media is trying to shape the public opinion where, in the words of Peter Pomerantsev, “nothing is true and everything is possible”. Even a demonstrative nuclear strike “somewhere in the ocean”, to teach Ukraine and the West a lesson.

Despite its renewed focus on Ukraine, pro-Kremlin outlets found opportunities to engage in vaccine-related disinformation this week, with a little help from the Russian Foreign Intelligence service.

Multiple Russian outlets have republished a press release by the Russian Foreign Intelligence Service (SVR), alleging that “European bureaucrats” were taking urgent measures to discredit the Sputnik V vaccine. To support such an argument, the Russian intelligence thought it wise to make up an entire quote of an EU official, allegedly urging the European Medicines Agency to delay the authorisation of Sputnik V until July or August. At the same time, the French edition of Sputnik claimed that the head of the European Medicines Agency, which is currently conducting the rolling review of Sputnik V, said she would seek to ban the Russian vaccine.

Needless to say, none of these claims are true. But they follow a trend in the pro-Kremlin media to portray the EU as predisposed against the Russian vaccine, with the aim to undermine trust in the European vaccination efforts. The official Twitter account of the Sputnik V vaccine dutifully contributes by increasingly engaging in the trolling and discrediting of the European media, institutions and politicians. 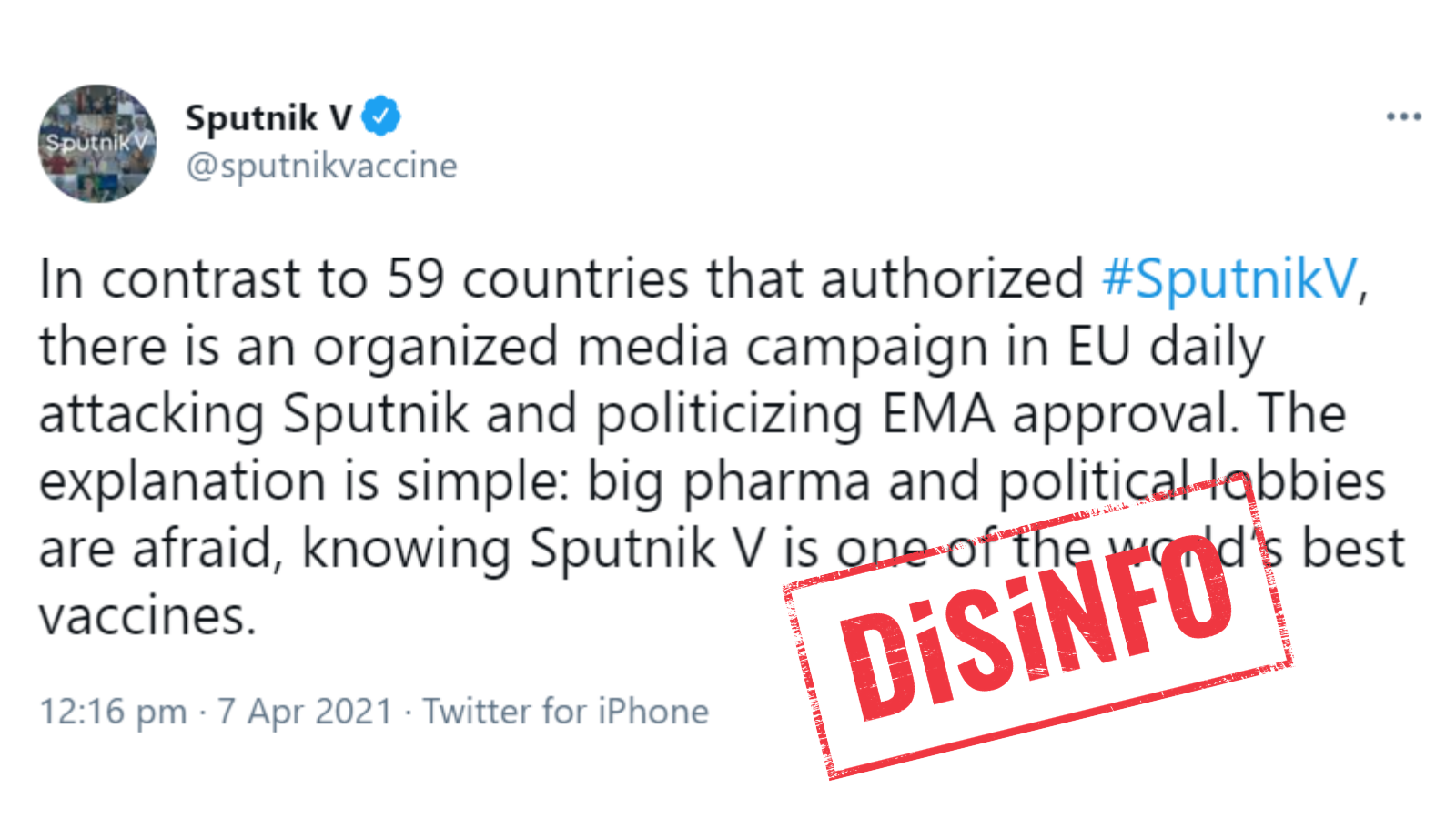 Date
Title
Outlets
Country
Kyiv is breaking Minsk and Normandy agreements
Ukraine, Russia, US
The EU is trying to discredit Sputnik V
Russia, EU
With 'Defender Europe 2021' NATO is practicing war against Russia
Russia, US, EU
The head of the EMA stated that she would seek to ban Russian vaccine
Russia, EU
Ukraine ready for attack in Donbas at Washington’s nod
Ukraine, Russia, US
Ukraine’s Crimea Platform is a swamp
Russia, Ukraine, EU
The EU destroyed relations with Russia
Russia, EU
Crimea accuses Ukraine of water shortages, plans suits in international courts
Ukraine, Russia
By continuing to browse the site you are agreeing to our use of cookies.