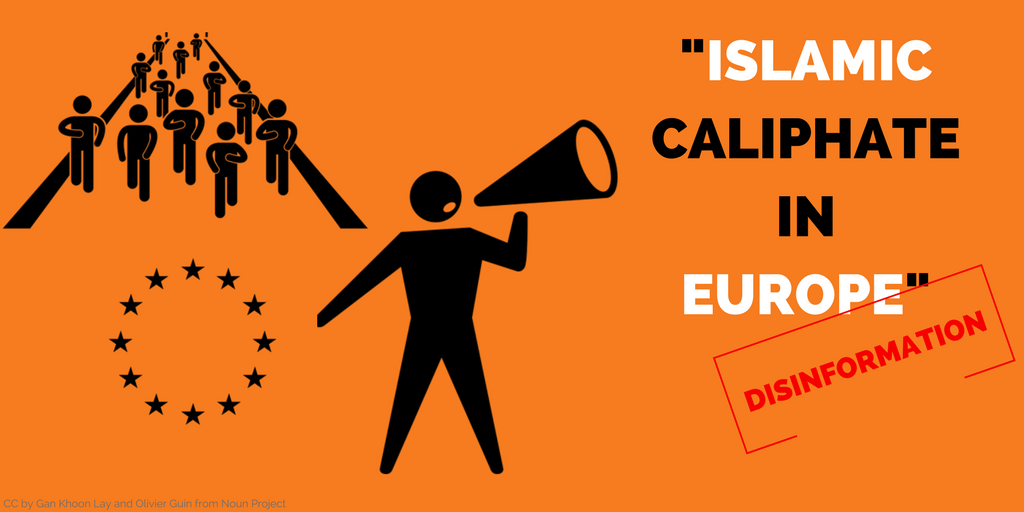 Disguised as journalism, the pro-Kremlin disinformation campaign can play on fears and concerns. This week, the spectre of mass migration totally changing the face and culture of Europe was a common thread, as outlets focused on the “threat of the migrant”. “Europe will become Muslim” was the message spread across the Russian language disinformation outlets. “Islamization of Europe is inevitable”, “Islamic Caliphate in Europe: Why Muslims will replace Christians in the EU”, the headlines ran. The outlets refer to a Pew Research Centre analysis on Europe’s Muslim population. The study indeed presents three scenarios on the growth of the Muslim population in Europe. Yet according to the highest scenario, 14 % of Europe’s population would be Muslim in 2050. (For comparison: According to the latest 2002 census, 10% of Russia’s population is Muslims). So this is not the seismic European identity shift predicted in the outlets concerned. Sowing confusion In fact the report does not mention “Islamization” of Europe at all, and the disinformation outlets don’t give answers about what that would even mean. The reader is only left with the feeling that Europe is under threat, and about to lose something that is precious for us today: our values, freedoms and in the end our identity. This is a common pro-Kremlin disinformation thread. For background, read more about the purposes of the different pro-Kremlin disinformation narratives on migration. Czech language disinformation outlets followed the same line. We heard that Sweden is almost in a war as immigrants and criminality have taken over – in a country which, by the way, ranked 5th in the Global Prosperity Index, 18th in the Global Peace Index and 10th in the World Happiness Report in 2017. Sputnik in the Czech Republic reported that the EU requires 56 million Muslims “in its structures”, and that this is the reason why the Czech government cannot invest in protecting Czech borders. See the debunk for this theory here.

Renaissance of the Soviet ghosts

Pro-Kremlin disinformation also prepared a gift to mark the 100th anniversary of Finnish independence on December 6 and for the historical date of the start of the Winter War on 30 November 1939. On November 23, TV channel Sankt-Peterburg broadcast a 26 minute long “documentary”, a replay from last year, about the Winter War between the Soviet Union and Finland in 1939-1940. Newspaper Ilta-Sanomat debunked ten lies that the documentary included, among them some ghosts from Soviet propaganda like “Finland attacked the Soviet Union first” and “neither the USSR nor Russia have never started any wars”. Even the current school books in Russia mention that it was the Soviet Union that started the Winter War. Familiar disinforming links to today’s policies are also provided: Sovereign states, Finland in 1939 and – no surprise – finally present day Ukraine, are all compared and described as “Russia’s territory”. For a detailed debunk of this serial disinformation, see here.

Date
Title
Outlets
Country
Bill Gates wants to depopulate the world
vesti7.ru
The EU keeps silent about a colossal corruption scandal; and glyphosate causes deformations, autism, diabetes and cancer
vesti7.ru
Sweden is almost in a war-state. The immigrants have taken over the lead of the country. The criminality is so high that police officers are afraid to serve
protiproud.cz
Sweden
The Czech presidential candidate Jiří Dahoš says that if he does not win the presidential election, it will be a clear evidence of Russian meddling into the elections.
vlasteneckenoviny.cz
Czech Republic
Because of the EU´s MEDA programme, the EU requires the admission of 56 million Muslims to its structures
Sputnik Czech
Iraq, Czech Republic
USSR or Russia have never started any wars
OTR TV - YouTube
USSR, Russia
UK and France had troops ready to help Finland already in 1939
OTR TV - YouTube
USSR, Russia, Finland
Finland constructed the Mannerheim line with help from the Germans
OTR TV - YouTube
USSR, Russia, Germany, Finland
In 1931 Mannerheim started war-preparation against the USSR
OTR TV - YouTube
USSR, Russia, Finland
In 1920, USSR lost a war with Finland and the USSR had to shamefully sign the Treaty of Tartu
OTR TV - YouTube
USSR, Russia, Finland
In 1939, Finland was just like Ukraine is now
OTR TV - YouTube
Italy, Denmark, UK, Norway, USSR, Russia, Germany, Finland, Sweden
Majority of Finns wanted their country to stay as part of Russia in 1917
OTR TV - YouTube
USSR, Russia, Finland
Europe will become Muslim
Is in trend now
utro.ru
Germany
In 1939, Finland attacked the Soviet Union first
OTR TV - YouTube
USSR, Russia, Finland
The US blocks humanitarian aid in Syria
TASS - Russian
Russia, US, Syria
George Soros has been declared persona non grata in Austria
Ganskhvavebuli Aqtsentebi @ Rustavi 2
Austria, Georgia
The UN called the Ukrainian army occupants and announced that they do not want to invest money in the "Ukraine government's open mouths"
politnavigator.net
Ukraine
World Jewish Congress recognizes Crimea as Russian
Rossia 24 - YouTube
Russia, Ukraine, US
Former Romanian president Băsescu believes that more than half of Moldovans need to be beaten
Argumenty i Fakty v Moldove
Romania, Moldova
Ukraine among countries with highest level of organized crime
Argumenty i Fakty Ukraina
Ukraine
Linguistic genocide in Latvia
ntv.ru
Latvia, Russia
The danger of radioactive pollution with Ruthenium-106 came from Romania, and not from Russia
Komsomolskaya Pravda - Moldova
Romania, Moldova, Russia
American secret laboratories spreads new diseases in Georgia
Facebook resource
US, Georgia
By continuing to browse the site you are agreeing to our use of cookies.