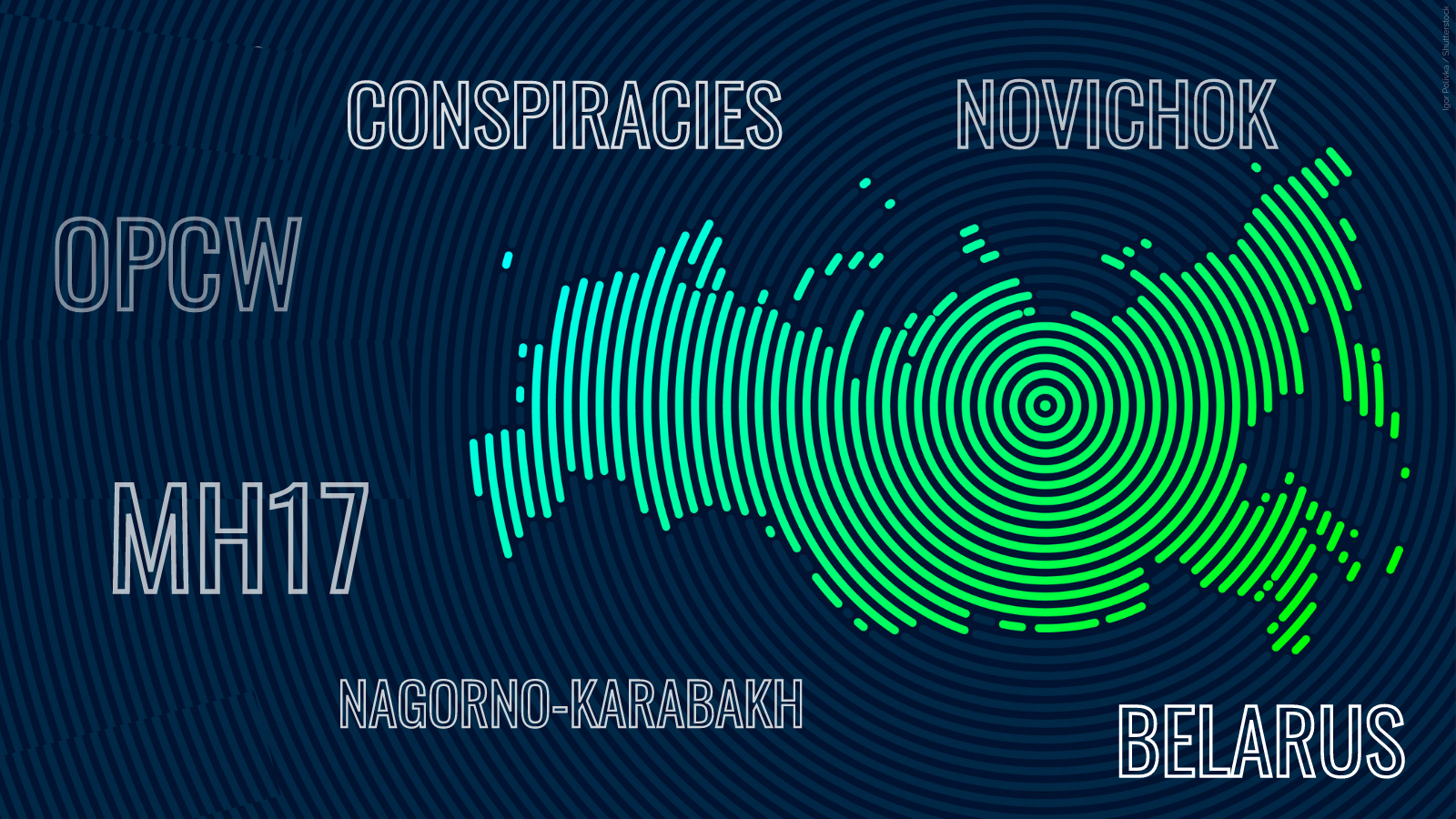 Be it Nagorno-Karabakh, MH17 or Belarus, everything is always against Russia.

Starting off with fresh disinformation about latest events, the pro-Kremlin media claims the escalation in Nagorno-Karabakh is directed against Russia because the US was meddling in Armenia. In reality there is no evidence the conflict is meant to destabilise Russia.

However, this disinformation claim is greatly outpaced by an Armenian language outlet, iravunk.com, claiming that in 2018 a mutant junta, funded by George Soros, arranged a coup in Armenia allowing LGBT people to grasp power and who now serve the goals of external forces.

Actually, there was no such coup d’etat in Armenia, but peaceful protests of hundreds of thousands of people against Serzh Sargsyan’s decision to take on the post of prime minister after serving for more than a decade as the country’s president. Claiming that civil uprisings are West-funded coups has already been applied to protests in Ukraine, Venezuela, Georgia and Belarus to portray the West as an aggressive actor, constantly preparing new coups and colour revolutions with paid protesters instructed by the Russophobic West.

One of the most creative examples of disinformation regarding Belarus is trying (yet again) to list all countries meddling there. Poland and Lithuania are claimed to be the main culprits, helped by the US, the Czech Republic and Ukraine. As usual, the pro-Kremlin media wilfully ignores that the electorate might be tired of fraudulent election results allowing the same politicians to remain in office without an end in sight.

Inspired by yet another example from the plentiful category of “someone being under the influence of someone else” it is time to coin a special term describing this condition. As for rules or guidelines, there is just one: while the EU, like the Baltic States, is claimed to be under US influence, and the CIA is influencing Facebook, it’s just a conspiracy theory that Russia influenced the US elections four years ago. As for the term, the most logical would be to paraphrase the American abbreviation for Driving under the influence or DUI, but instead of driving, it should be Governing under Influence or GUI. 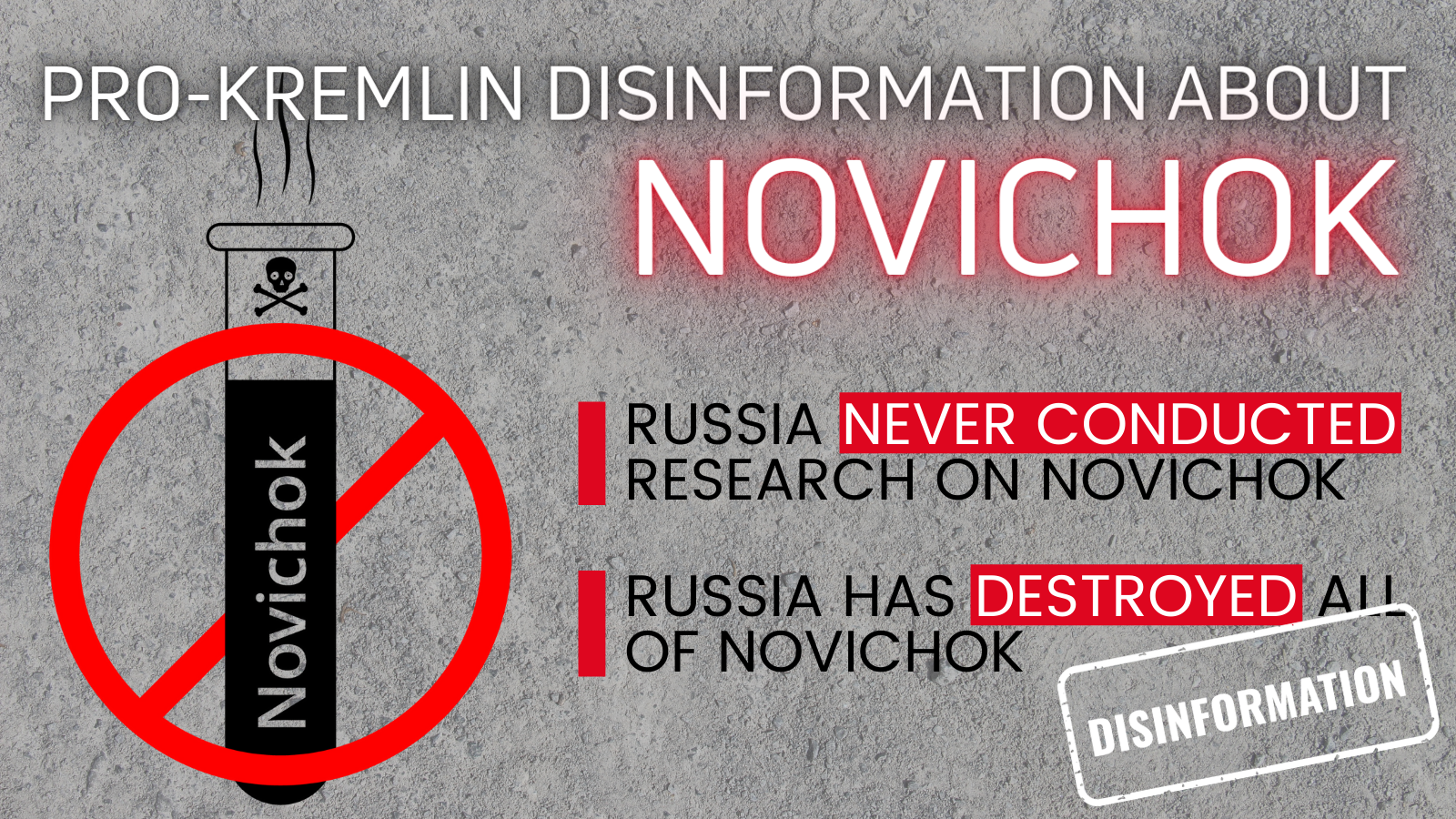 This week we also documented some desperate attempts from pro-Kremlin media to convince the public that the USSR and Russia neither conducted research on Novichok, nor had it in stock. Now, this claim may contradict the words of the Director of the Foreign Intelligence Service, Sergey Naryshkin, who stated that Russia had destroyed its Novichok stockpile “in accordance with OPCW procedures and rules”, but it also raises the question, where did this stockpile of Novichok came from?

Well, worry not! First, according to the pro-Kremlin media, the Organization for the Prohibition of Chemical Weapons is “by no means a trusted organisation”. Now, ignoring the question of why bother with playing by the rules of the OPCW if it’s not trustworthy, the pro-Kremlin media also claims that “the most likely sources of the poisonous gas are the UK, Czech Republic, Slovakia, Sweden and the United States”.

No holds barred with MH17

While we sometimes end the Disinformation Review cover letter with funny or strange examples of disinformation, this time this section should be dubbed as rubbing salt into the wound. Tsargrad has published an article claiming that “Hiding the truth about the [MH17] plane crash is beneficial to the Netherlands. Because, if the plane crash was caused by an explosive device on board, the responsibility falls on the Netherlands, since the airliner took off from the Dutch airport, Schiphol.“

But then again, all the above mentioned examples are in line with the ethical standards of pro-Kremlin media, giving itself licence to ridicule murder, deny occupations and blame every wrongdoing on somebody else. 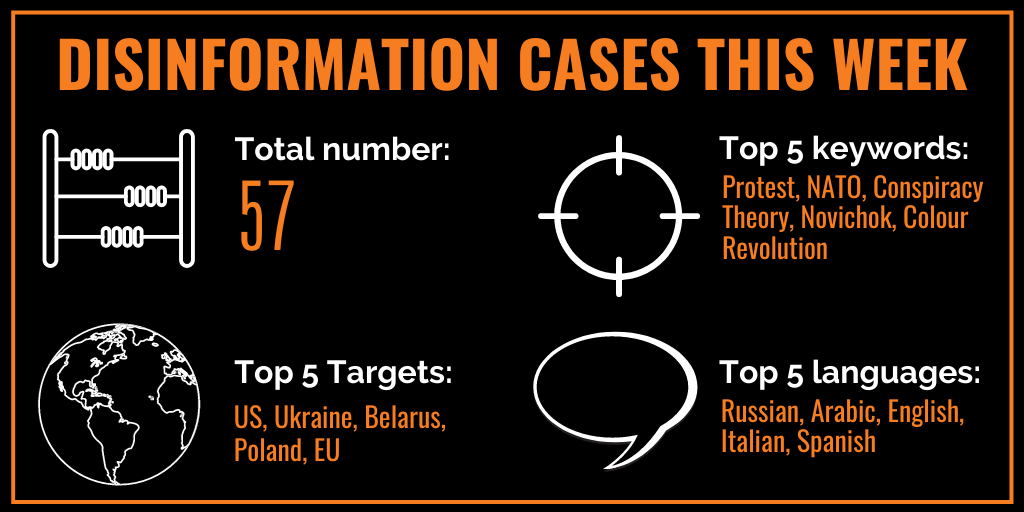 Date
Title
Outlets
Country
For 25 years, Sweden has lied about "Estonia" being sunk by a Russian submarine
Sweden, Estonia
Imperialistic Poland and Lithuania are the springboard for Belarusian Maidan
Poland, Belarus, Lithuania, Russia
Russia never meddles in the internal affairs of other countries
Russia
The escalation between Armenia and Azerbaijan is directed against Russia
Azerbaijan, Armenia, US, Russia
NYT story on Trump's tax returns proves Russiagate is a hoax
US, Russia
Nagorno-Karabakh conflict favours US interests, someone wants to divert Russia from Belarus and Syria
Azerbaijan, Armenia, Syria, US, Russia
Russia has been the sole guarantor of Armenian statehood
Armenia, Russia
Soviet occupation is a myth
Estonia, Baltic states
The US has planned the turmoil in Belarus and the rise of tensions in Nagorno-Karabakh a year ago
Azerbaijan, Armenia, Belarus
British analyst explains in Foreign Policy why Washington needs a “Russian intervention”
China, US, Russia
Polish Governments continue to serve the American Empire
Poland, US
The "Big Finance" and the Democrats will use Poland as an aggressive anti-Russian vanguard
China, Poland, US, Belarus, Ukraine, Russia
Navalny poisoning: Western media prefer ideology before facts in discussing poisoning
France, Germany, US, Russia
What is happening in Minsk is primarily a Polish project
Poland, Belarus
Novichok can be produced anywhere
Germany, Russia
Navalny wasn’t poisoned with Novichok, he would be dead within 10 minutes
Russia
It is impossible to recover from a Novichok poisoning
Russia
Ukraine will present another propaganda film about Donbas at the Oscars
Ukraine
USA destroys Ukrainian identity
US, Ukraine
Russia never developed Novichok
Russia
Situation with Navalny is a massive disinformation campaign of Western countries
Russia
USSR and Russia never conducted research into the toxic substance Novichok
Russia
The authors of the UN Human Rights report on Venezuela lack moral authority
Venezuela
COVID-19 restrictions are result of a bizarre psychosis and collective paranoia
Italy
US activity in Armenia during the last years led to the 2018 revolution
Armenia, US
NATO troops' presence in Ukraine is illegal - this is occupation
EU, Ukraine
Lukashenka was inaugurated in accordance with Belarusian law
Belarus
Belarusians will become beggars if Lukashenko is overthrown
Poland, Belarus, Lithuania, Ukraine
Russia has legally destroyed all of Novichok
Russia
Hostile actions of Poland towards Belarus a smokescreen for Poland's real goals
Poland, Belarus
US wants anti-Russian forces in Belarusian government to wage war against Russia
US, Belarus, Ukraine, Russia
The US influenced Poland and the Baltics to recognise Tsikhanouskaya
EU, US, Belarus, Baltic states
Neither the USSR nor Russia have never researched or manufactured Novichok
USSR, Russia
European policy of interference in Belarus continues and deepens
EU, Belarus
NATO troops are illegally in Ukraine
Ukraine
The West is using Navalny’s case to obstruct Nord Stream 2
US, Russia
A “Marshall Plan” is necessary for depopulated Lithuania, corrupted Romania and less and less law-abiding Poland, but not Belarus
Romania, Poland, Belarus, Lithuania
France and Germany became participants to the conflict in Donbas
France, Germany, Ukraine, Russia
Claims on Russian presence in Libya are based on forged data
Libya, Russia
Estonia again on the way to war against Russian language
Estonia, Russia
Hiding the truth about MH-17 crash is beneficial to the Netherlands
The Netherlands, Ukraine, Russia
The West attacks Lukashenka in order to worsen the situation in Belarus
Belarus
After the anti-Armenian coup of 2018, the power belongs to LGBT people
Armenia
Ukrainian community in Crimea says there is no hint of national hostility on the peninsula
Ukraine, Russia
The West’s attack against Belarus is also an attack against Russia
EU, Czech Republic, Poland, Belarus, Lithuania, Ukraine, Russia
UN human rights report on Venezuela aims to delegitimise the upcoming legislative elections
Venezuela
Ugly commercial interests are behind the criticism of the Russian COVID 19 vaccine
United Arab Emirates, China, UK, US, Russia
Tsikhanouskaya’s participation in an EU Council meeting is interference in Belarus’s affairs
EU, Belarus
Russian progress in Covid-19 vaccine has become for the West an outrageous challenge
Russia
Ukraine loses visa-free travel and 1.5 billion euros of loans from the EU
EU, Ukraine
Ukraine has lost its economic and military independence
EU, UK, US, Ukraine
NATO violates the fundamental Russia-NATO agreement
Poland, Russia
The objective of EU sanctions is to increase Russophobia
Russia
The West is preparing the disintegration of Ukraine
EU, UK, US, Ukraine
Georgia aims at infecting South Ossetians with Covid-19
Georgian region of South Ossetia, Georgian region of Abkhazia
The CIA is organising a colour revolution in the US to oust Donald Trump after the November 2020 elections
US
The United States played a key role in organising the protests in Belarus
US, Belarus, Russia
The United States and its European allies organised a “colour revolution” in Belarus
Venezuela, Syria, US, Belarus
EU sanctions are against the standards and spirit of international law
EU, Russia
The OPCW is by no means a trusted organisation
Syria, Germany
By continuing to browse the site you are agreeing to our use of cookies.