Disinformation Review: The World through the Eyes of the Kremlin 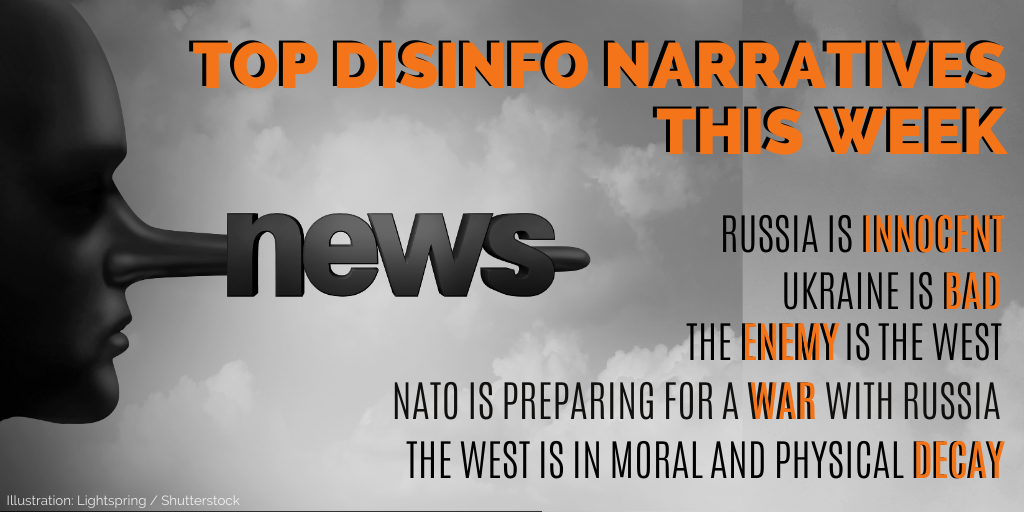 This week, the pro-Kremlin media focused primarily on attacking NATO, the West and Ukraine. As usual, Russia was portrayed as entirely innocent.

To make sense of the 60 cases of disinformation we gathered this week, we divided the most common and recurring narratives into broader categories. The overarching thrust of the Kremlin’s messaging is how the rotting West is an enemy led by a small clique of evildoers, like George Soros. By using different instruments like NATO, the West is meddling all over the world and threatens Russia politically, culturally, and militarily.

The West is aiming to destroy Russia and drain its resources. At the same time, the US and Poland sow discord between Belarus and Russia.

In addition to Eastern Europe, the U.S. is also active in Hong Kong, where it uses colour revolution technologies to destabilize China. Those measures remain the main instrument of Western interference in the affairs of sovereign states.

Obviously, pro-Kremlin disinformation needs a quick recap of facts. The foreign policies of the US and the EU do not revolve solely around Russia, nor are they aimed at its destruction.

As for the protests in Hong Kong, they started organically over a controversial extradition law. Nevertheless, the pro-Kremlin media has been eager to claim that protests all over the world are Western-funded “colour revolutions”.

The West is in Moral and Physical Decay (7 cases)

George Soros is encouraging mass illegal immigration, promoting gender theory and supporting unruly minorities. As the Western feminised semi-men are unable to protect their women from immigrants, the influx of migrants has already sparked rebellions.

Things will only get worse as the already deindustrializing and de-intellectualizing Baltic States can only be saved from extinction with the help of people born in the Congo, Zimbabwe, and Equatorial Guinea. And as Sweden clearly demonstrates, migration will lead to crime-infested “no-go” zones, where police and businesses are too afraid to venture.

With 92 disinformation cases in the database connected to George Soros, the pro-Kremlin media really puts him on par with supervillains from the adventures of Batman, Sherlock Holmes, and James Bond.

The disinformation narrative about supposedly deindustrializing and de-intellectualizing Baltic States manages to discredit climate change, the Baltic states and their policy, and Greta Thunberg all in one go. 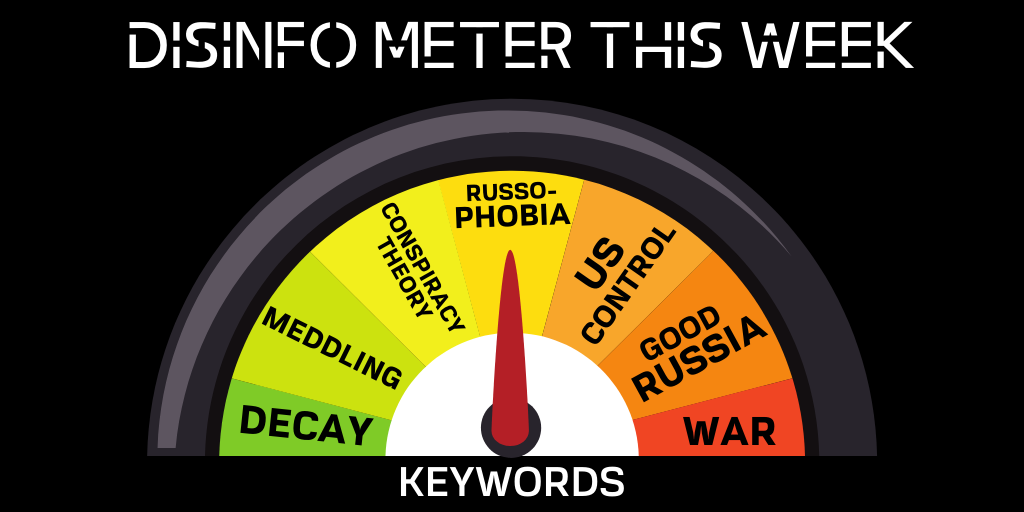 NATO is Preparing for a War with Russia (5 cases)

NATO is an instrument of US foreign policy that is preparing for a war with Russia by sending troops to Europe.

NATO does not ask for permission from its member states, it just deploys missile defence systems where it wants. If, for example, Latvia was truly independent, it would have not encouraged foreign military bases on its soil. But Latvia has no say in NATO and is now paying an occupation fee for NATO’s presence.

A quick fact-check by the pro-Kremlin media would reveal that the Alliance does not seek confrontation with Russia and that all decisions in NATO are made by consensus. The latter means that each member of the Alliance has an equal say, and all member states are involved in decision-making processes.

Similarly to the story about the Lugar lab in Georgia, Ukrainian virology laboratories are supposedly testing chemical weapons on their own compatriots, so it’s fair to say that nobody cares about Ukrainians ‘existence.

This makes sense as Neo-Nazis have an outsized influence in Ukrainian politics. This is proven by the fact that they are trying to use decommunisation to cover up unrestricted Russophobia and that Kyiv does not want rebel held territories back because the voters in Donbas would throw the Nazis from power.

As usual, the truth is far more boring: virology laboratories in Ukraine are actually preventing diseases. As for no one caring about Ukrainians, it’s actually a quote by a political commentator of a pro-Kremlin media outlet that was wrongfully attributed to George Soros. And accusations of Nazism are recurring pro-Kremlin disinformation narratives despite far right groups absence from Ukrainian parliament.

Russia is not attacking Ukraine and Crimea belonged to Russia until the 1980s. It returned to Russia in 2014 after a popular referendum and all this shows that Russia is an arbitrator just like France and Germany.

The response from the U.S.? Even more anti-aircraft missiles, exercises and military bases in NATO countries with access to the Black Sea. But that’s not all – as the U.S. was the first to start creating weapons that are in violation of the INF Treaty, Russia will work on medium-range missiles too.

Most of those disinformation narratives have been in use since 2014 and claim that the West has abandoned Ukraine and that Russia is not involved in the conflict in eastern Ukraine. As the NATO countries are sovereign states, they are free to make decisions based on their threat assessment. And the narrative about the INF Treaty? Well, it’s just another example in our 6691 strong cases database of pro-Kremlin media sacrificing facts in the name of a catchy story. 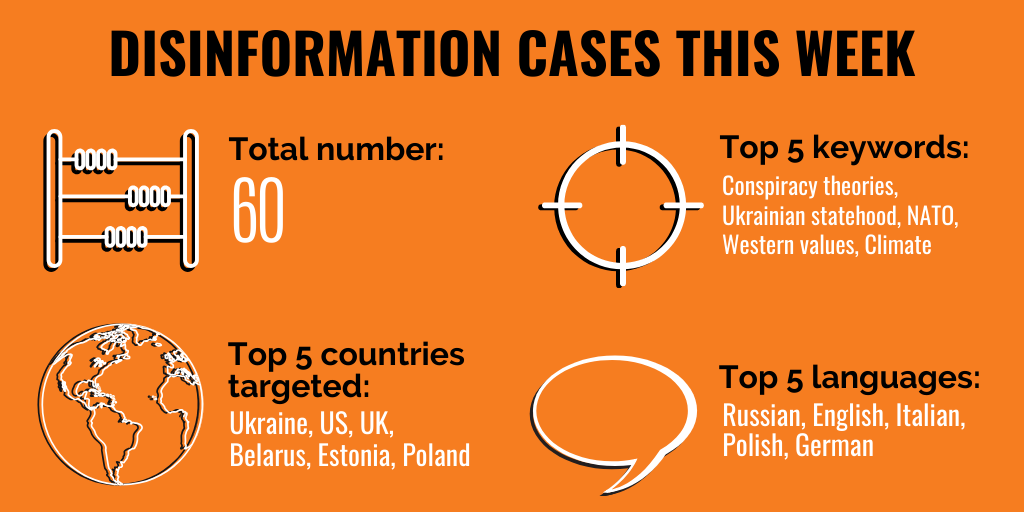 Date
Title
Outlets
Country
UK will stay in EU, just as the British Elites and the EU decided, three years ago
UK
Example of Crimea showed that there is no stability in Europe
Ukraine, Russia
Ukraine won't join NATO, won't gain entry to the EU
Ukraine
Virology laboratories in Ukraine are testing viruses and chemical weapons on their own citizens
Ukraine
Ukraine has to remove the curators from the US and EU
US, Ukraine
The notion of "Russian influence" in the US is an absurd conspiracy theory
US, Russia
While everybody is looking at Syria, NATO prepares for war in the heart of Europe
Russia
Neo-Nazis have an outsized influence in Ukrainian politics
Ukraine
The West is aiming to destroy Russia
Syria, US, Russia
The West is behind terrorist organisations in the Middle East
US
Russia is not a party to the conflict in Donbas, it is a arbitrator
Ukraine, Russia
Ukrainians travel to Hong Kong to share their experience
Hong Kong, Ukraine
Petro Poroshenko lied about his own provocation in the Kerch Strait and the US supported this lie
Ukraine, Russia
Estonia. Entry only for those, who have forgotten their history
Estonia
The Rothschilds plan to force the gold standard on the World again
UK
Latvia has no say in NATO thus the money spent on NATO is an occupation fee
Latvia
By supporting Euromaidan, the EU promoted similar protests in the EU
Kosovo, Spain, US, Ukraine
Ukrainian autocephaly is a tool to split the Orthodox world
Ukraine, Russia
Russia gave Crimea to Ukraine in the 80-90s
Ukraine, Russia
Catalan leaders have recognized Crimea
Spain, Ukraine
Ukrainian diaspora condemned the sanctions policy on Crimea
Ukraine
European countries have lost their sovereignty through the European treaties
Crime-infested no-go zones exist in multiple European countries
Sweden
New developments in the Skripal case reveal it for the sham it always was
UK
Crimea returned to Russia after a popular referendum
Ukraine, Russia
Sweden caught a buoy instead of a Russian sub
Sweden
Sweden ready to call just anything a "foreign submarine" to get a pretext for spending millions on a military operation
Sweden
George Soros seeks to destabilise Europe
Today’s Western males are feminised semi-men unable to protect their women being raped by immigrants
Sweden, Germany, US
Europe catastrophically lacks gas
Russia
Europe realised that anti-Russian sanctions are meaningless
Armenia, Russia
Greta Thunberg is an artificial project, behind which there are serious racketeers
Armenia
Greek church recognised Ukrainian Orthodox Church after being influenced by the U.S.
Greece, US, Ukraine
Colour revolutions are used by the West to interfere in the affairs of sovereign states
Venezuela, Georgia, Belarus, Ukraine
The West attempts to drain Russian resources and wants to harm Russia-Belarus relations
US, Belarus, Russia
US and Poland continue sowing discord between Belarus and Russia
Poland, US, Belarus, Lithuania, Russia
Pentagon calls to confront the Russian threat in the Black Sea with more missiles
US, Russia
Ukraine’s attempt to get rid of Communist symbols is an attempt to cover up unrestricted Russophobia
Ukraine, Russia
UK denied access to the Skripals
UK, Russia
Three types of Russophobia are turning Belarus into anti-Belarus and anti-Russian state
Poland, US, Belarus, Russia
The U.S. will easily betray the Baltic states and hand them over to Russia
Poland, US, Lithuania, Estonia, Russia, Latvia
Missile defence system was deployed in Romania without permission
Romania, Poland
NATO is an instrument of US foreign policy and poses a threat to Russia
Romania, Poland, US
Russia will create medium-range missiles because of the USA
US, Russia
Kyiv does not want rebel held territories to rejoin Ukraine
Ukraine
Alfred Kinsey’s 1948 report on sexuality was designed to promote the most deviant sexual behaviour
US
The Baltic states are dying out and soon will be inhabited by people from Congo and Zimbabwe
Congo, Lithuania, Estonia, Latvia
European Commission did not detect signs of a disinformation campaign for EU elections
Russia
Greta is wrong, real science has no proofs of human impact on climate change
US, Russia
Poland wants to prevent the Ukrainian-Russian reconciliation
Poland, Ukraine, Russia
NATO is a monstrous Cold War relic, which will provoke conflicts as long as it exists
US, Russia
European Parliament condemns Ukraine’s actions during WWII
Ukraine
The U.S. uses all colour revolution technologies in Hong Kong to destabilize China
Hong Kong, China, US, Ukraine
George Soros: Europe will win even if no ashes remain from Ukraine - Nobody cares about the Ukrainians
Ukraine
Moving towards the West is the end of the Belarusian statehood
Poland, Belarus
Belarus proved the Belarusian Nuclear Power Plant is safe
Belarus, Lithuania
Baltic states followed Greta Thunberg's agenda, it resulted in complete degradation and dying
Lithuania, Estonia, Latvia
Robert Mueller’s investigation proved there was no collusion between Trump and Russia
US, Russia
George Soros is behind political vandalism in Mexico City
Mexico
By continuing to browse the site you are agreeing to our use of cookies.