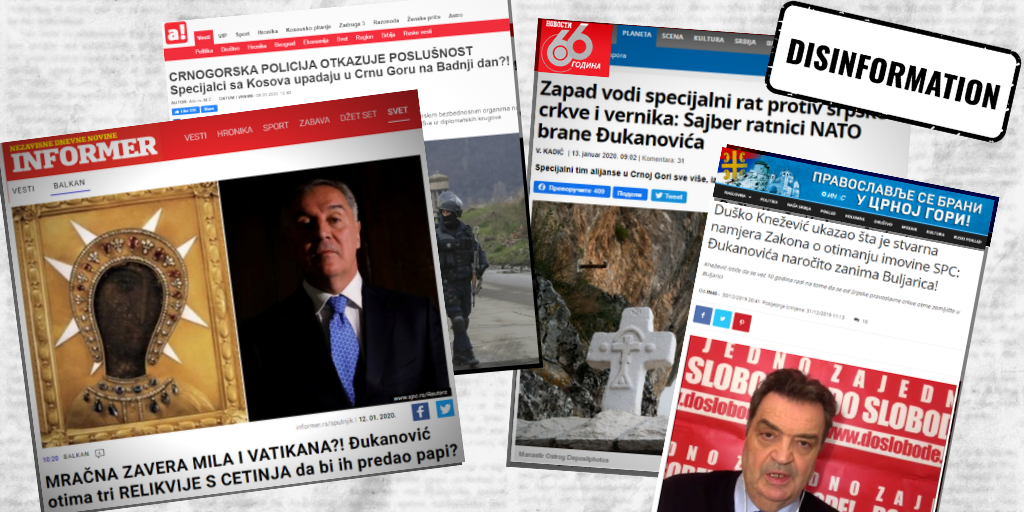 The divisive situation around the newly adopted Law on Freedom of religion of Montenegro has been used by disinformation outlets in the region to foment division, resembling the practice already detected in Ukraine, Armenia and Georgia.

The adoption of the Law on Freedom of Religion, enacted by the Parliament of Montenegro on 27 December 2019, attracted significant media attention across the region and especially in Serbia. Coverage mainly focused on provisions related to the property of the Serbian Orthodox Church (SOC) in Montenegro. The analysis of press clipping pointed at fair reporting, but also highlighted propaganda, disinformation and fake news, which reached its peaks in the first week of January.

As reported in the media across the region, the one of the disputed provisions in the law concerns proof of ownership of property by religious communities. According to the Montenegrin Digital Forensic Centre, 35.000 news articles and social media posts opposing the Law have been published over the last three months. As reported, 20.000 of these news items came from Serbia and 9.000 came from Bosnia and Herzegovina.

From Russian to Serbian media

Enactment of the Law led to political tensions, violent incidents in the Parliament of Montenegro, and series of protests organised by the SOC in different towns in Montenegro as well as in Serbia and the Republic of Srpska entity of Bosnia and Herzegovina.

The sources of the false reporting included media which were based in Serbia (some of them state-owned), Russian owned in Serbian language media (Sputnik) and some Montenegro based news portals. They also often disseminated unverified manipulative content created by users of social networks and statements by Russian, Montenegrin and Serbian politicians and clergy representatives..

Some media extensively wrote about the Serbian orthodox church property claiming it will “end up in the hands of the rival Montenegrin Orthodox Church”, which is a  “fake church” and “schismatic”, claiming that the SOC properties will be rented or sold or made tourist resorts and attractions. Another narrative was depicting the conspiracy theory that the Government of Montenegro is planning to give away SOC’s sanctities and relics to the Holy See and/or Order of Malta.

Another tactic, exposed by some local fact checkers, was the use of articles from a 2015 version of a draft law which were not adopted by Montenegro and which are not part of the adopted law, to create a false picture of the effects of the new law. Those old texts included provisions that religious communities with an official seat outside of Montenegro would be prevented from registering, that the Government would be able to approve the election of heads of religious communities, that religious organisations could be easily abolished and their property transferred to the Government etc. None of them have been included in the currently approved text.

And then there is NATO…

Fuelling conspiracy theories, wrongful messages circulated that the government planned to invite 250 members of Kosovo’s special police ROSU to help ensure order on Christmas Eve. The Government reacted very quickly, announcing on Twitter that it was fake news. The news portal that broke this story, deleted it shortly thereafter. The disinformation came at a critical time, when tensions were high and many people were engaged in protests.

Anti-NATO sentiments were used to increase the sense of conspiracy. Media alleged that the NATO’s counter-hybrid support team visiting Montenegro were tasked with “taking down sites and portals that disobey the Montenegrin President’s rule, controlling the internet, manipulating mass protests by diminishing their numbers, blaming archbishops through mounted texts…”

The situation has heavily stirred emotions within the country and partially sustained the protests that had started in December last year, right after the adoption of the Law.